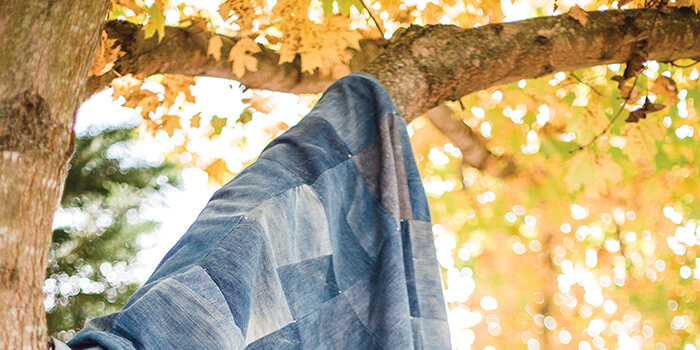 I didn’t know my grandmother, Mary Ann Cox Staley, born near Seagrove in 1901. She was a farmer’s daughter who married a Randolph County farmer and raised six children — including my mother — until her unexpected death in 1954. I hadn’t been born then, so I’ve only seen a picture of her, looking stern within the frame. She left behind decades of quilts, sturdy and soft, with backing made from feed sacks and filling made from homegrown cotton. She cut the front sections in squares and triangles of red and blue and the muted greens and browns of the farm where those six children hoed corn, chopped tobacco, slopped hogs, gathered eggs, hunted rabbits with a brown dog named Lead, and got their milk from a pair of cows, Red and Daisy.

One of my grandmother’s quilts in particular — six feet by seven feet of denim squares salvaged from overalls too worn to pass down to younger siblings — is more history than patchwork of cloth, a faded-blue sketchbook of soft fabric that represents hardscrabble North Carolina farm life during the Depression.

This denim quilt, made around 1940, is draped across the back of a chair in the kitchen of my mother’s Greensboro home. When she picks it up, the keepsake carries her 35 miles down U.S. Highway 220 South, back down what’s now Zoo Parkway, a right turn across the creek where we kids threw stones at water bugs during our visits. The turn-of-the-century house sits on a gentle rise, the centerpiece amid a barn, smokehouse, granary, two corncribs, and a car shed, all made from lumber and notched logs cut from the woods. Well into the ’60s, the house, and everything inside it, was a relic of an earlier era: My grandfather wore Red Camel overalls, even though he’d retired from farming. A woodstove used for cooking turned the kitchen into an inferno, even during the winter. There was no indoor plumbing.

My grandmother hosted quilting bees in the living room. She and three of her friends would each work on one side of the quilt, and they’d finish in a day. The quilts wound up on the feather beds of the children, who slept two to a bed. When the quilts wore out, they were used to cover sweet potatoes and white potatoes so they wouldn’t rot. “Nothing was wasted,” my mom says. Not during the Depression.

My mother, the only one left of those six siblings, recognizes patches of denim on that decades-old blue quilt. The patches with the dark spots, she says, came from grease smeared on overalls by her father and brothers. One dark blue patch looks as new as the day my grandmother bought the garment from the Hudson Belk store in downtown Asheboro. Most of the patches, though, are so worn they’re slick and white. Kneeling in the fields wore out the knees of overalls. Riding on the hay wagon wore out the backsides. My mom remembers. There are things — days, nights, work, play, meals, games, hardships, and good times, too — that only she can glimpse in those patches of blue.

Quilts for all seasons

That quilt folded in your cedar chest has a story to tell — not just in the patchwork, but in the lining that keeps you warm, or cool. A quilt’s batting can vary depending on the maker, place, economy, and time of year. During the summer, an unlined quilt protects against the predawn chill. But for harsher winter temps, a quilt’s interior might be made of cotton or wool, worn blankets or quilts, old coat linings, tobacco cloth, or even milkweed floss. Traditionally, whatever was there, whatever could be used to line a quilt’s patchwork story, was put to work. It was all about making do. And keeping warm. — Katie Fennell