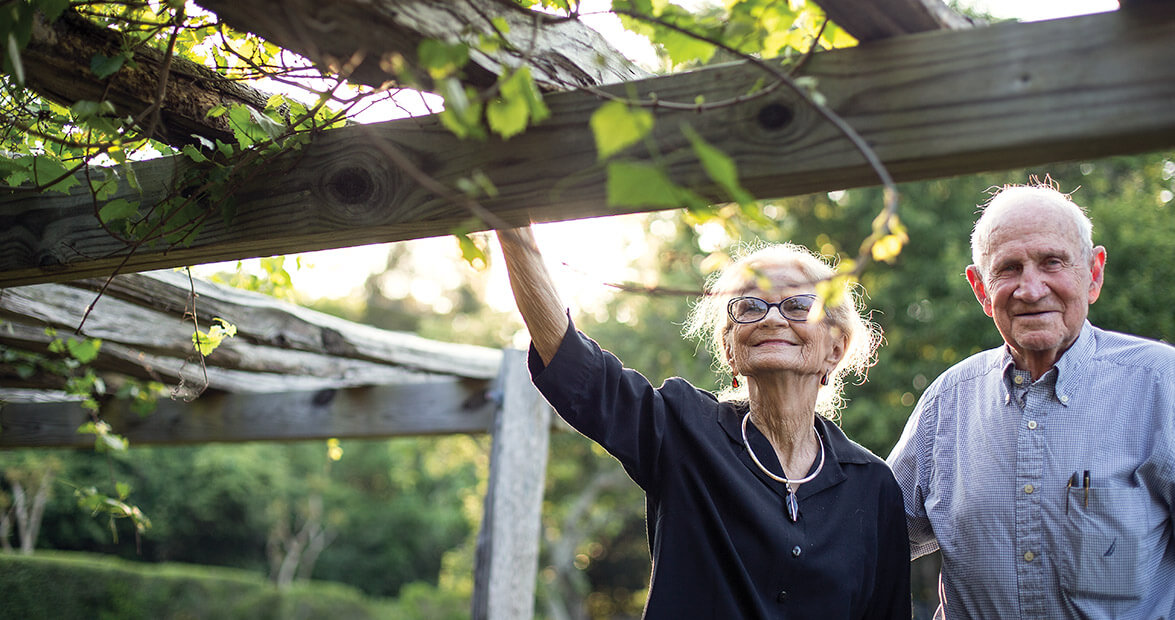 The Mother Vine, a rambler of a scuppernong growing wild and free, stood between Jack Wilson and the waterfront house he planned to build for his wife, Estelle, and their 5-year-old son, John, on the outskirts of Manteo. It was 1957, before progress stripped away many of the grapevines growing on this northeastern section of Roanoke Island. The Mother Vine covered almost an acre of the Wilsons’ property, so Jack hired a bulldozer. By the end of the job, the bulldozer had uprooted half of the sprawling vines that had stretched from a dense tangle in the sandy soil to the Roanoke Sound 80 yards away.

The Mother Vine, though, is no ordinary scuppernong. Some historians believe it may be America’s oldest cultivated grapevine, possibly planted by the Croatan Indians or by early English settlers. Those would have been the ones following the original colonists who disappeared mysteriously in the late 1580s and live on in “The Lost Colony” outdoor drama, just a mile and a half from Jack and Estelle’s place on cedar-lined Mother Vineyard Road. Not everyone is convinced that the Mother Vine deserves its claim to fame — some say that it may not be the original vine discovered by colonists, that Tyrrell County, not Dare, may have been home to the oldest scuppernong vines in the Old North State.

Whatever the case may be, scuppernongs were plentiful on North Carolina’s coast when Capts. Philip Amadas and Arthur Barlowe landed on Roanoke Island in 1584 as leaders of Sir Walter Raleigh’s first expedition to the New World. Amadas and Barlowe wrote that the land was “so full of grapes as the very beating and surge of the seas overflowed them.”

The Wilsons’ own roots are firmly planted in this soil. The Manteo sweethearts married in 1949, after Jack finished a stint in the Coast Guard and decided to pursue Estelle instead of moving to Texas to train as a merchant marine. She worked for the Dare County schools, and he worked for Kellogg Supply Co., a building supply company in Manteo. Sixty-five years later, they live comfortably together in a home filled with local art and a wide-open view of the sound.

For a long time, despite the Mother Vine’s historical significance, Jack resisted thinking about it in a public way. He didn’t like tourists parading through his yard for a look at the vine and sometimes peering into the house. “When I first got here, I didn’t want to talk about the vine because I didn’t want anybody up here,” Jack says. “Now I’m happy for anybody to look at the vine and take pictures. But I don’t want busloads of people coming up here and interfering with my lifestyle.”

His change of heart can be attributed to Estelle’s encouragement, and to the fact that, in the past 57 years, the Mother Vine has taken root in the Wilsons’ lives. 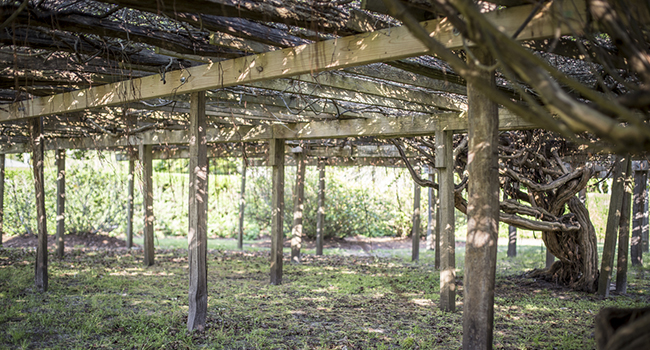 One afternoon, Jack stoops slightly to walk under the Mother Vine’s canopy. His strong, dark hands snap deadwood that blocks sunlight. He fiddles with new methods of pruning to promote growth of new vines and fruit. “It doesn’t produce as much as it did,” he says. “It’s just getting too old.”

Part of that, Jack admits, is his fault. In recent years, he realized that the bulldozer that cleared his home site also damaged the grapevine. Digging up so many of the vines caused its oldest root to shrink, a reaction to the smaller number of vines it was feeding, according to Jack’s son, John. “We didn’t understand until the last decade as we watched the big root atrophy that we had actually caused it,” John says.

That fact made Jack more appreciative of the fragility of the Mother Vine. And in 2010, a poison scare generated national headlines, further convincing him of the vine’s importance. A utility worker accidentally sprayed the vine with powerful herbicide intended to kill roadside brush. The spray hit a tendril of the Mother Vine growing up a power pole, and from that spot, leaves began turning brown and shriveling up.

Specialists arrived from North Carolina State University and the University of Virginia. Standing in the yard, Jack listened to their recommendation to cut out a third of the vines to “get ahead of this dying before it gets ahead of us,” he recalls. Their advice reminded him of the bulldozer’s harm. He told the university experts, “I’m not going to consent to that yet.”

Jack contacted Donald Hawkins, who, as owner of Vineworks in Magnolia, has installed about 20 vineyards since 2001, including 25 acres for Duplin Winery in Rose Hill. After seeing the Mother Vine, Hawkins suggested clipping short sections of the vine to see whether the inside had turned brown, a sign that the poison had reached that far. Fortunately, it had spread only a few feet from the utility pole.

So the Mother Vine lives on.

Estelle makes preserves from the grapes. Mornings, Jack drinks coffee out there and inspects his handiwork — tidy vines on stout black locust posts — as the rhythm of the seasons pulls him along. He prunes in February, the coldest month, when the sap is down. He makes sure the arbor is sturdy enough to hold the extra weight from the springtime growth and clips vines dangling down at harvest time. He keeps a dozen pairs of clippers around the house.

Now, as then, in late summer, the canopy is green and lush, and bronze grapes dangle at the perfect height for a child to pluck like sweet candy drops. Jack and Estelle are reminded of John when he was a boy, picking grapes to sell by the roadside. They’ve made sure others will share the same opportunity.

“We might own the land,” Estelle says, “but the vine belongs to all people.’’