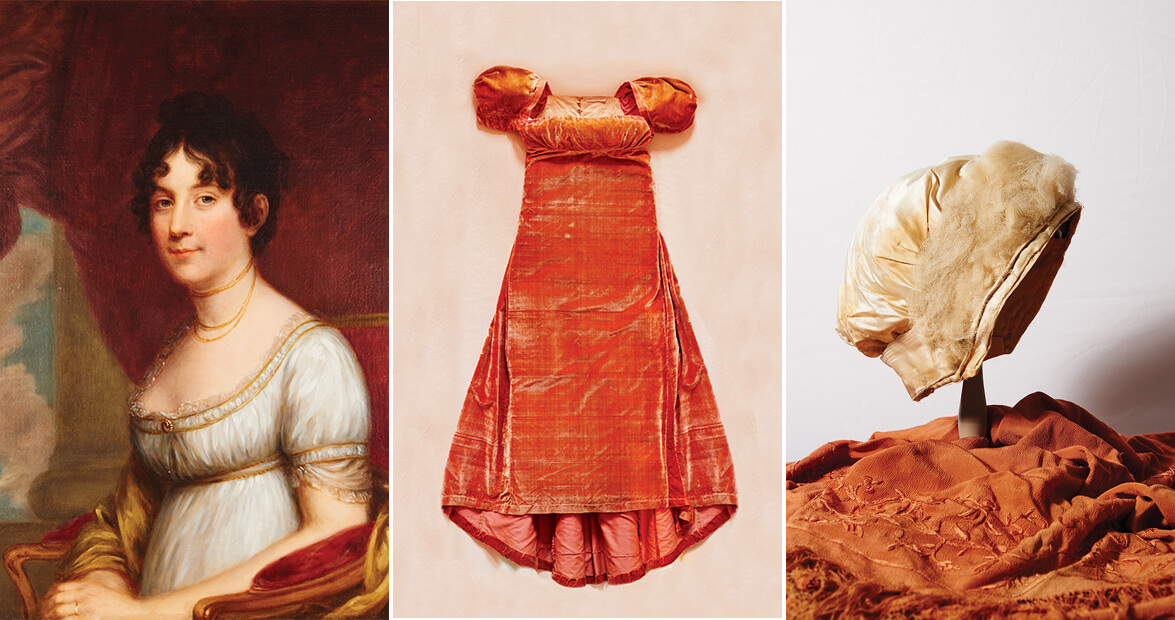 The woman had style, spunk, charisma, and chutzpah. Ask Thomas Jefferson, who enlisted her help as hostess for his White House parties. Today, Dolley Madison could make a mint as an event planner.

In that she was born in Guilford County, North Carolina gets to claim Dolley, wife of James Madison, the fourth president. James was a shy guy, fortunate to have hitched his wagon to a prescient star who understood that nonpartisan social gatherings that included women were good for a politician’s career. Imagine that. Her grand galas were known as “squeezes,” because she squeezed in everyone.

Clearly, Dolley was no helpmeet fool. Her resourcefulness is the basis for a mystery, and a hoped-for likelihood, that’s put our state, and a particular frock preserved deep in the bowels of a museum, on the map for history buffs and textile experts and curious detectives of every stripe.

Two hours before the enemy entered the city … I sent out the silver (nearly all) and velvet curtains and General Washington’s picture. — Dolley to Mary Latrobe, 1814

Plenty of people have an “ICOF” list: what they’d grab in case of fire. Dolley was faced with a situation just as destructive: British redcoats and the War of 1812. On August 24, 1814, 4,000 British troops were on the verge of invading Washington, D.C. Most residents had already fled, and the president was on the front lines, but Dolley was still chez 1600 Pennsylvania Avenue. Famously, she gathered documents, silver, various objects, and the full-length Lansdowne portrait of George Washington by Gilbert Stuart that hangs today in the East Room of the White House, thereby saving them. A day later, the White House was a charred shell.

Fast-forward to Dolley’s death in 1849, when her possessions were auctioned off by her only child, son Payne, an alcoholic gambler who brought her only pain and eventual poverty. A favorite niece, Anna, managed to buy most of Dolley’s things, and when Anna died, her daughter Mary became the next beneficiary. The chain of possession ended with Mary’s daughter-in-law, Neva Kunkel, a bona-fide hermit and hoarder, who, by the end of her life in 1956, ate whatever food her neighbors left on plates outside her door. Despite the “disgusting” interior of the house — rodents, an entire tree she broke branches off of for fires — the executor of the “estate” had to enter, clean, collect, and deal with what Neva had left behind. And thus, behind a door leading into the attic, was discovered a trove of Madison memorabilia — valued at more than $1 million today. There, along with calling cards, a crystal inkwell, a satin turban, and 220-plus other items, was The Dress.

Like fashion everywhere, the era — the 1820s — dictated the style: a simple, empire-waisted dress with a flat front, deep neck, train, and few embellishments. Dolley had no interest in regalia — ornamental jewels, braids, or beads — that smacked of royalty; after all, we’d just finished with King George III. The dress was pretty, but ordinary, except for its red velvet fabric, so similar to the red velvet curtains Dolley had hung during her renovations to the White House. The same drapery, perhaps, in which Dolley had wrapped silver and china for her flight? This is the kind of question and suggestion — a history mystery — that makes curators, collectors, and Dolley fans salivate.

A group of Greensboro women raised and pooled funds, and bought the collection — now a central exhibit at the Greensboro Historical Museum. Along with her artifacts, Dolley’s Dress began to make the rounds at many collections around the country. So many, in fact, that it began to show the strain, and in the 1980s, the museum had a replica made for its permanent collection. The seamstress, a University of North Carolina at Greensboro teacher with a background in costume design, noted, unprompted, that the original dress “seemed to be drapery-weight velvet.” Add another check to the Yes column.

When, in 2012, the Smithsonian Institution planned a major exhibit on the War of 1812, the era when Madison was president, the institute came knocking on the Greensboro museum’s doors. Dolley’s Dress was to claim center stage in the National Portrait Gallery, but not without endless auditions. Stipulations, rather. Textiles are organic, and, eventually, like the rest of us, they fall apart. Illumination levels, angle of repose, how it would be stuffed with tissue, and what type of tissue — these were only a few of the issues debated. Hundreds and hundreds of photographs were taken to document each tear or stain or evidence of stress. The garment was measured within an eighth of an inch to build a shipping crate. The Smithsonian sent a truck larger than a school bus to transport one dress — The Dress — never mind special art couriers. Inside the Smithsonian, The Dress was displayed on an angle within a glass box, Sleeping Beauty-style.

So little of Dolley survived. But she saved this dress. Why? Was there an emotional connection because she had it made during her penniless years, from fabric that had been a part of a happy time of her life? In that era, people frequently reworked clothing, and the dress has obvious alterations: the train was removed; newer gores reveal added panels (to accommodate the stoutness of aging?). Beyond those hints, a selvage line indicates the fabric’s origin of manufacture — France — which is also the origin point for the draperies Dolley had made for the White House.

There is no silk damask to be had in either New York or Philadelphia, and I am therefore forced to give you crimson velvet curtains. Architect Benjamin Latrobe to Dolley, 1809.

It’s not outlandish to conclude that those curtains could be this dress. Which prompts another question: Did oral history survive a century into the 1930s, when Margaret Mitchell was writing Gone With the Wind? “Miz Ellen’s drapes” at Tara might well have had a predecessor in the White House. Later, Scarlett was wearing a red velvet robe when Rhett hauled her up that splendid staircase carpeted in, oh yes, red velvet. The very fabric suggests a personality not easily cowed. Independent and strong-willed and determined. Like Dolley.

The Dress, accessorized with a trendy turban and paisley shawl, was the equivalent of the little black dress of its day, says Susan Joyce Webster, the curator of costumes and textiles at the Greensboro Historical Museum for more than 35 years. “It’s a national treasure,” adds Carol Ghiorsi Hart, the museum’s director. “It won’t go out again.” Not even for a request from Disney World, currently updating their Hall of Presidents exhibit. Instead, this national treasure of mysterious origins resides in safe, dark, airtight protection in museum storage. Part Sleeping Beauty, part Scarlett O’Hara, and all ours.