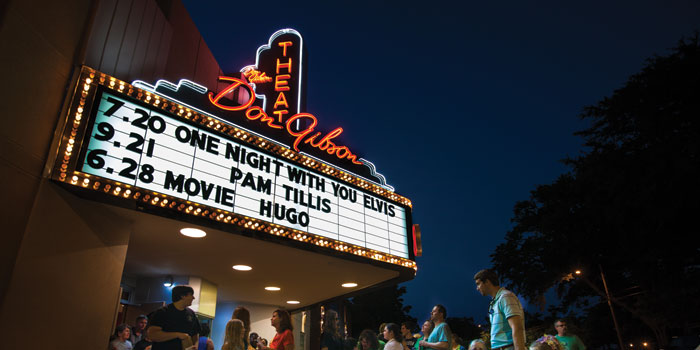 As a boy growing up in Shelby during the 1950s, Harold Plaster made priceless memories at the old State Theatre downtown, where movies once cost a dime apiece.

Every Saturday afternoon, he and his buddies gathered at The State Theatre to watch their cowboy heroes — matinee idols like Randolph Scott, John Wayne, and Sunset Carson. A generation later, Plaster’s sons discovered heroes of their own here, watching their first Star Wars movie.

Meanwhile, lots of young couples — like Clyde and Suzy Buckner — courted at The State during the early 1960s. Who knows how many kisses were stolen in the darkness of the old place?

“It was one of the best Saturday night places to go on a date,” recalls Clyde Buckner, who grew up in Shelby and lives there still. “We went there once or twice a month, and it was a really nice theater.”

Indeed, The State was one of the finest of its day when it opened in October 1939 with Art Deco design, a carpeted lobby, air-conditioning, a spacious ladies’ lounge, and comfortable seating in an auditorium draped in thick, red, velour curtains. Out front, a classic, glittery marquee beckoned passersby to come enjoy Hollywood’s latest offerings.

Around 1980, as multiplex cinemas grew in popularity, The State was overhauled and converted into more modern-looking twin theaters, operating under the name The Flick. Eventually, The Flick gave way to an antiques market, which eventually relocated, and in 2006. the life of the historic theater building faded to black.

When the group began looking for a centerpiece project to help revitalize Shelby’s struggling downtown business district, all eyes ultimately turned toward the old movie house. Could this well-worn building, once a Mecca for Cleveland County moviegoers, thrive again as a theater, only this time as a tourist attraction?

In November 2009, following a major capital campaign to restore the former State Theatre to its original sparkle and shine, Shelby unveiled the new Don Gibson Theatre, an intimate, 400-seat venue named for one of the city’s favorite natives. The late Gibson, who is buried in Shelby’s Sunset Cemetery, was a nationally renowned singer/songwriter, best-known for his country hit, “I Can’t Stop Loving You.”

On opening night, country music star Marty Stuart played a sold-out concert. Since then, singers Richard Marx, Gene Watson, and Bucky Covington; comedian Paula Poundstone; and many others have performed here. The facility also presents a classic movie series and numerous other events, which draw crowds to downtown Shelby — including visitors from 16 states and six foreign countries.

The numbers are just part of the story, though. Not too long ago, Harold Plaster’s 7-year-old grandson, Miller — the third generation of the Plaster family to frequent the theater — was called onto the stage during a magic show. Afterward, he proudly boasted to anyone who would listen, “I’ve been on the stage at The Don Gibson!”

Some things, it seems, never change.

Jimmy Tomlin lives in Greensboro and is an award-winning writer for The High Point Enterprise. Jimmy’s most recent story for Our State was “Man with a Mission” (July 2012).