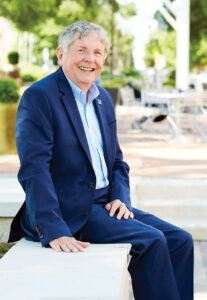 Darrell Hinnant strolls along West Avenue in downtown Kannapolis, stopping to greet a group of moms with young children lounging in the shade. He waves to dog walkers and runners who call out, “Hey, mayor!” as they cross the street to the North Carolina Research Campus. The 350-acre facility is dedicated to investigating the effects of nutrition, lifestyle, and the environment on human health. “We never dreamed [downtown] would be this perfect,” Hinnant says, motioning to the large swings, sculptures, and fountains lining the sidewalks. The idyllic streetscape is the result of Kannapolis’s multiyear revitalization plan to bring people downtown to “discover a healthy life” — the city’s slogan, which was inspired by the research center.

Kannapolis was a different place when Hinnant, a chemist originally from Goldsboro, moved to town in 1975 to work as a supplier for the Cannon Mills Company. When the mill — once the largest manufacturer of towels and bedsheets in the world — closed in 2003, laying off 4,000 people, downtown businesses essentially ceased to exist. “Great big men were coming [to city council meetings] with tears rolling down their cheeks,” says Hinnant, who was a city council member at the time.

Today, after many years of advocating a new vision for the city, Hinnant hopes that Kannapolis is now a place where his seven grandkids will be proud to return after college. But even after dedicating the past 20 years of his life to a second career in public service, Hinnant still likes to say, with a laugh, “I’m a chemist by trade.” 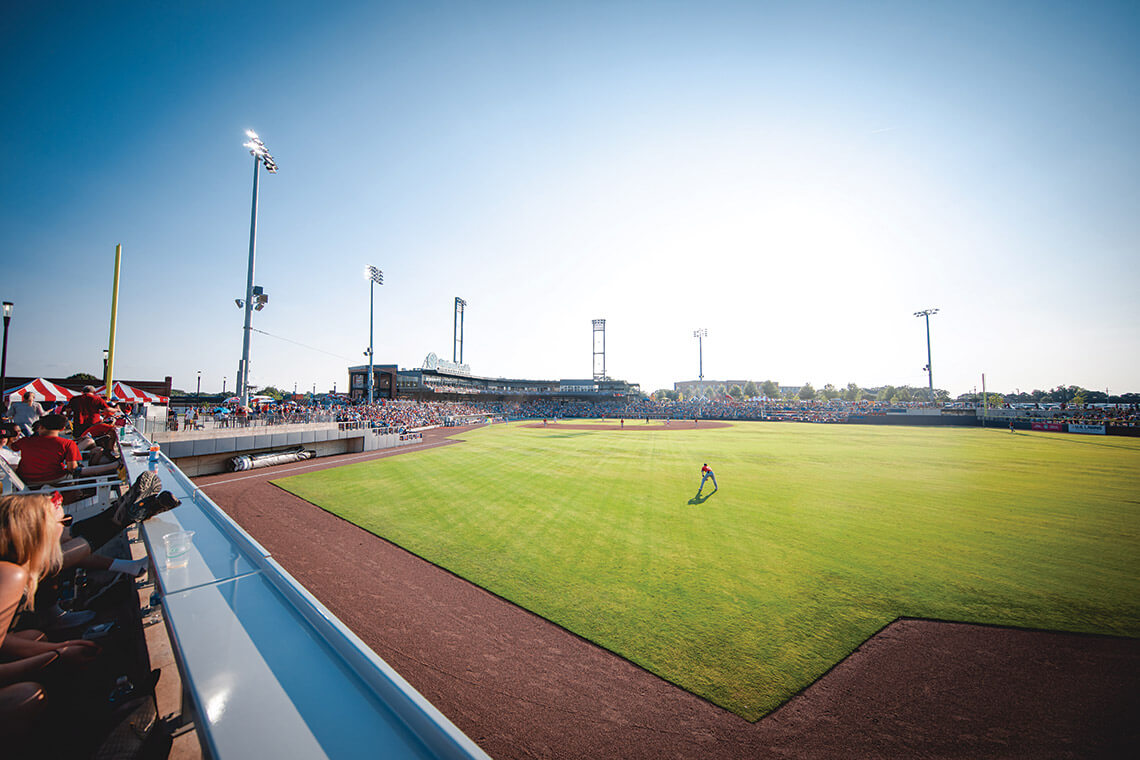 Atrium Health Ballpark. This 4,930- seat stadium downtown is the home of the Kannapolis Cannon Ballers. The city decided to build a new park for their minor league baseball team in 2018, and it’s become “the anchor that made all of this [downtown growth] happen,” Hinnant says. The stadium stays open most days of the week so people can walk through it for exercise. 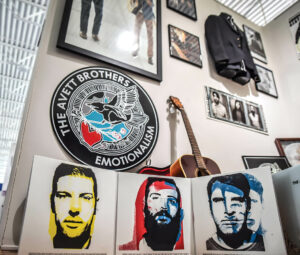 Gem Theatre. This single-screen movie theater celebrated its 85th birthday last year. It’s where many locals worked their first jobs or went on first dates, and the theater’s neon sign is an icon in Kannapolis. “One of our city council members proposed to his wife under the marquee,” Hinnant says. 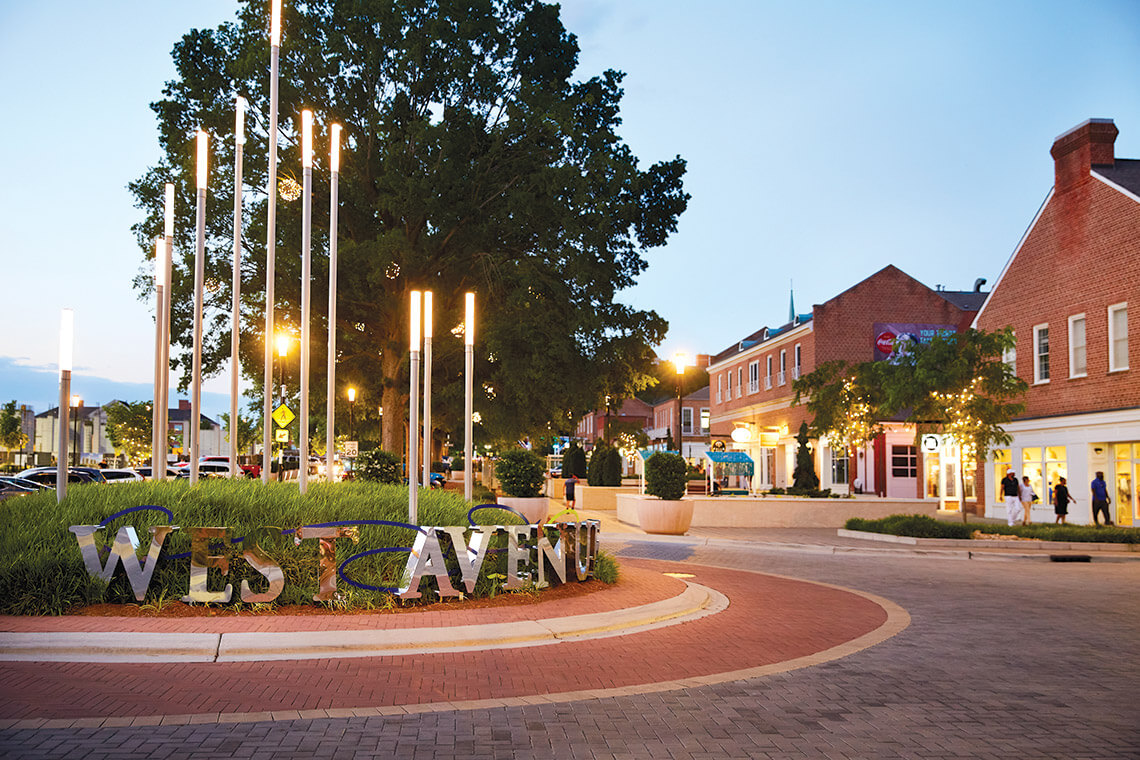 Discover the shops and boutiques in the West Avenue District. photograph by Stacey Van Berkel 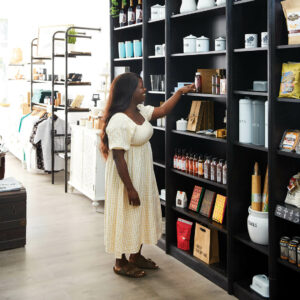 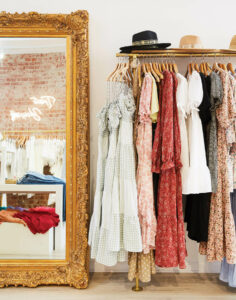 Lennon Boutique. Stormi Holder opened this trendy shop in December 2020 and runs it with her sister, Kassidi. A neon sign glows against an exposed brick wall, encouraging shoppers to “treat yourself” to the selection of women’s clothing, sneakers, graphic band T-shirts, jewelry, and more.

3 Jem’s Boutique. This family business owned by three sisters — Jenna Faggart, Emilee Stamper, and Meredith Little — serves up both elevated and casual looks in modern women’s fashion. Every week, the sisters list their respective favorite items — along with their personal style preferences as a guide for shoppers — on their website.

Lovely Lines Boutique. In 2017, following a conversation between friends Jessica Barringer Eudy and Erica Earnhardt-Wilson, who dreamed of a boutique shopping experience for women of all shapes and sizes, the pair launched an online clothing shop that quickly grew into a brick-and-mortar store on West A Street. Now, the co-owners sell trendy clothes in sizes XL and up, and their downtown boutique is a place for all women to feel beautiful.

Cabarrus Cycling Company. This bicycle shop is fueled by a mission to connect the local community through healthy and affordable transportation. All kinds of cyclists are welcome at this location, which specializes in Trek and Electra bikes. 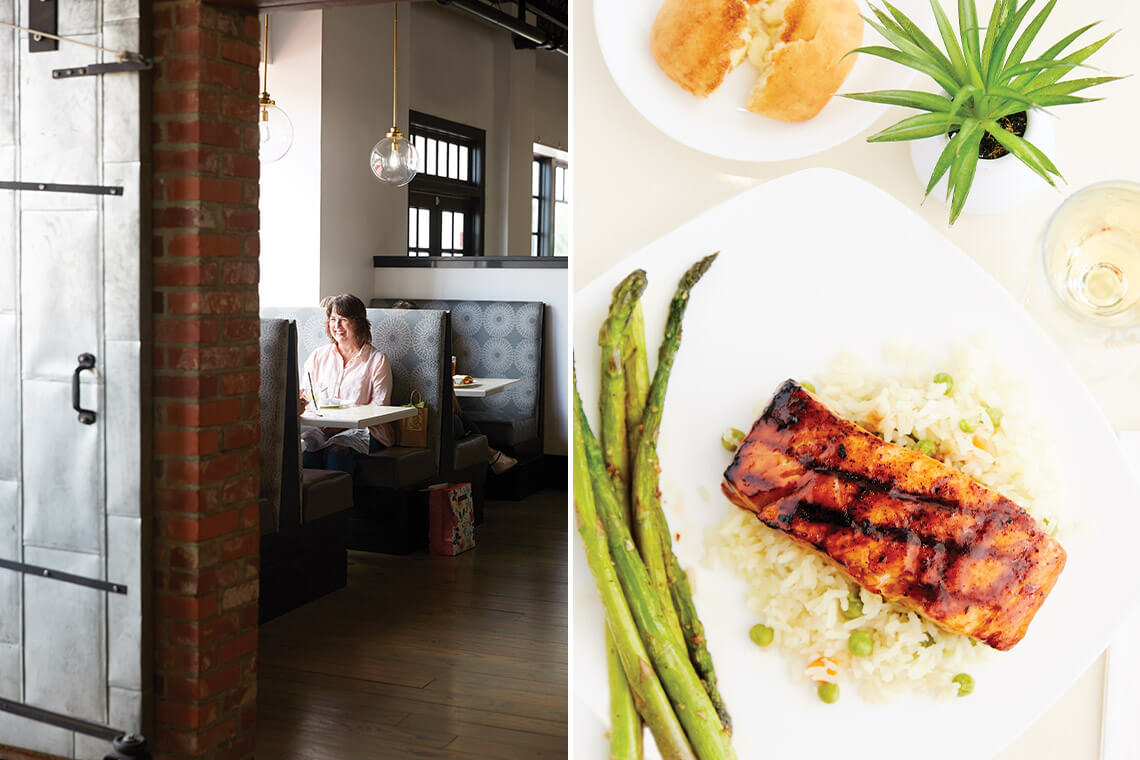 Chophouse 101. The only full-service restaurant in downtown Kannapolis has a large, varied menu, but it’s best known for its steak and seafood dishes — the grilled teriyaki salmon is especially popular. Hinnant’s go-to is the 101 Creamy Garlic Penne Pasta, which comes with sun-dried tomatoes, mushrooms, spinach, and your choice of chicken, shrimp, or salmon.

Sabor Latin Street Grill. This restaurant serves a variety of casual Latin fare, including street food like elote — grilled corn mixed with a creamy garlic sauce and cotija cheese — and entrées made with 12 different kinds of protein, including savory pork belly and barbacoa. On nice days, customers can sip a margarita and other cocktails while strolling the street — alcohol is permitted outside restaurants within the limits of the West Avenue District.

Lettuce Eat Café. Located off the lobby of the UNC Nutrition Research Institute building, this small café mostly serves fresh salads and sandwiches to campus employees, but it’s open to the public, too. “They have a great grilled chicken wrap,” Hinnant says. “They try to change their menu so people don’t get tired of the same things.”

My Sister’s Place Ice Cream & Fudge. Two sisters run this ice cream and fudge shop on West Avenue. My Sister’s Place has many creative flavors, such as Cow Tippin’ — a vanilla ice cream with caramel and caramel-filled chocolate cups. 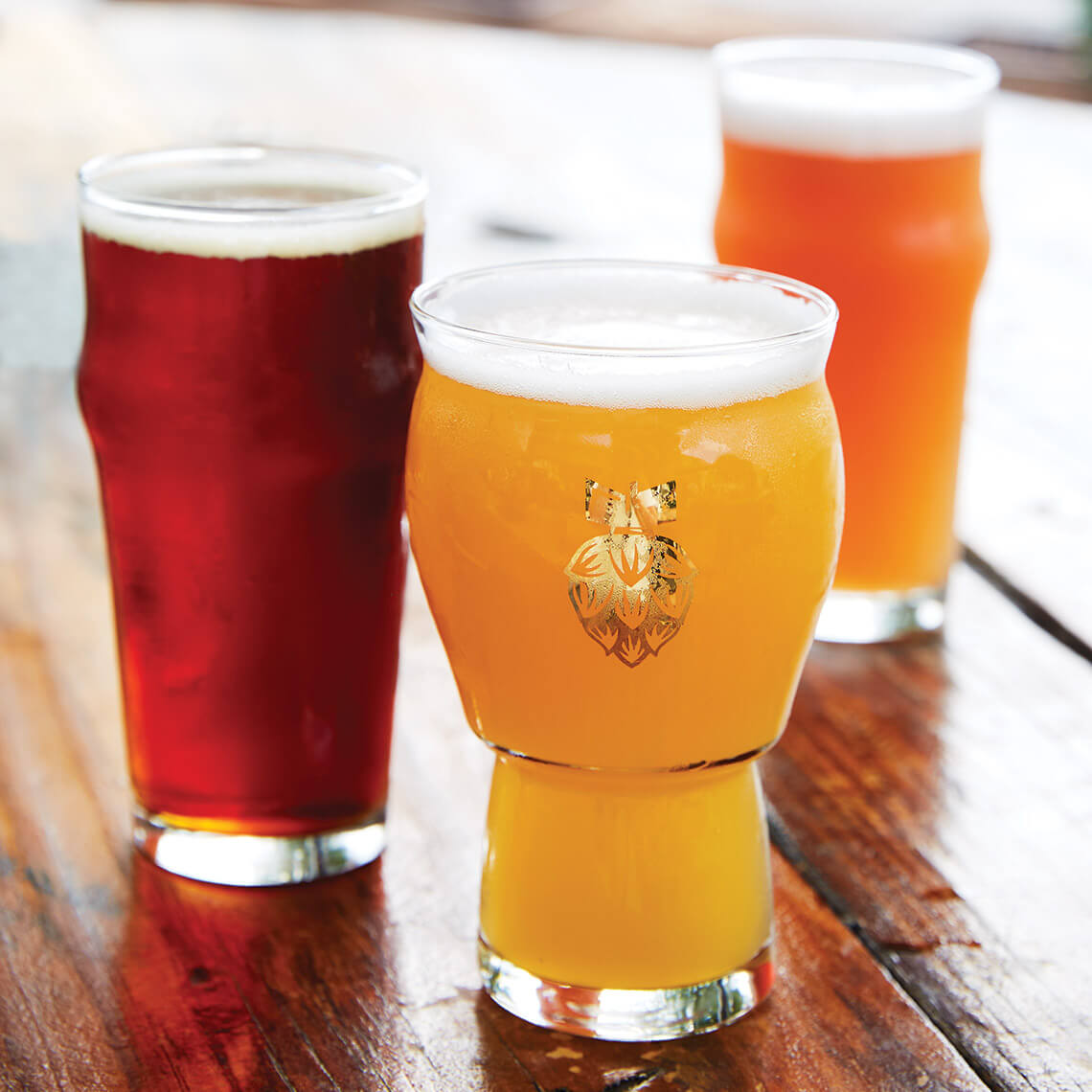 Old Armor Beer Company, Tipsy Hare Ciderworks, & Local Patriot Roasting Company. Kannapolis’s first brewery and first cidery are conveniently located in adjoining buildings that are owned and operated by veterans and friends Kyle Lingafelt and Stefan Perrine. At Old Armor, popular beers include Dust Off, a hazy IPA; Lost Lieutenant, a golden ale; and Earnhardt Outdoors Ale, a light gold beer created with Dale Earnhardt’s son Kerry. Customers can use the brewery’s pay-it-forward program to buy a beer for first responders or members of the military. Lingafelt and Perrine have a similar program at Local Patriot Roasting Co., a coffee shop down the street that they own with Kate Falconer.

Editions — Coffee and Bookstore. Located in historic downtown in a former millhouse, this coffee shop and bookstore is a gathering place for a community of artists and book and coffee lovers and hosts many local events. Sip a frappe in one of the shop’s signature flavors, such as Cheerwine Frost or Coco Loco, while perusing the vast used book collection.

The Mill Inn. This six-suite inn is located within walking distance of downtown. The spacious suites are decorated with a mix of modern and traditional furnishings, and each comes with a kitchen, bathroom, living room, and bedroom, plus a washer and dryer for guests enjoying a longer stay. The main hallway is lined with black-and-white photos of Kannapolis and the Cannon Mills Company.

To promote a healthy lifestyle, Kannapolis offers plenty of green spaces to explore and enjoy. 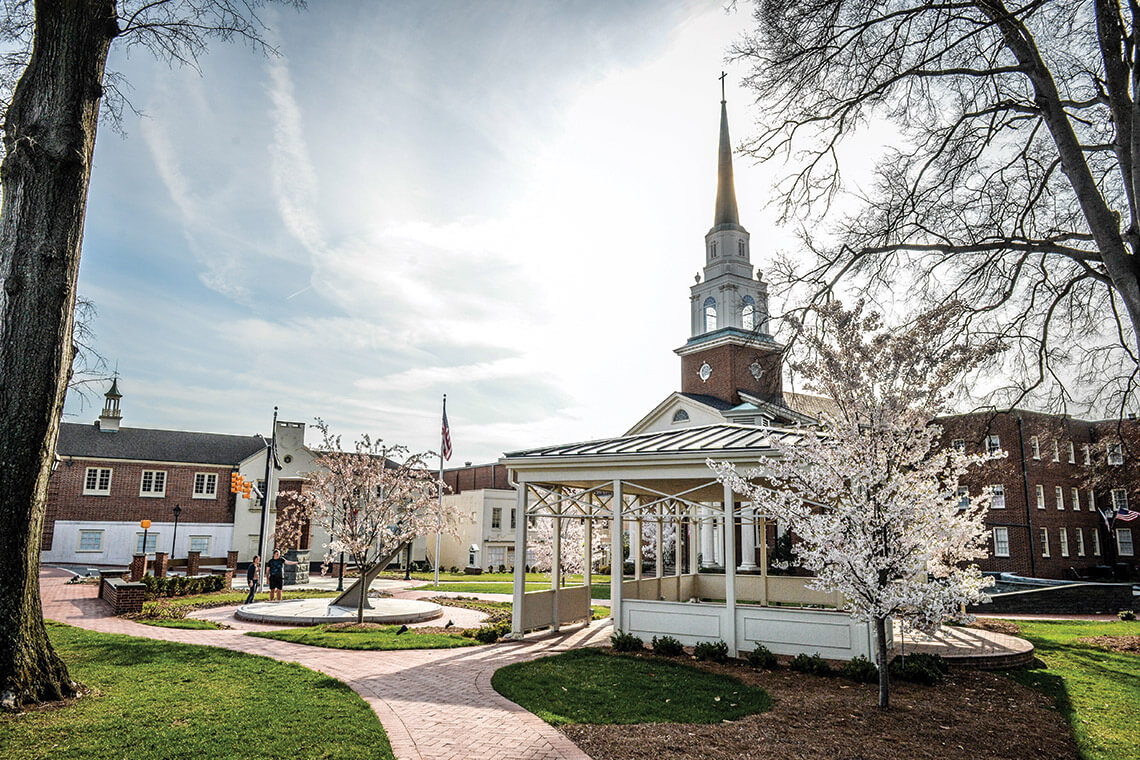 Bring a picnic to Veterans Park.

The Ring of Honor is the centerpiece of this park, with more than 17,000 names etched in granite representing people from Rowan and Cabarrus counties who died in military service, starting with the Revolutionary War.

This park is known for hosting events during the city’s annual Summer Concert & Movie Series, held from May to August in its amphitheater. Other features include the Rotary Express train, one of two double-decker carousels in the state, and a splash pad. 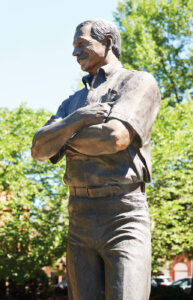 A nine-foot-tall bronze statue of Dale Earnhardt anchors this plaza, which includes benches in groups of three to represent his race car number. The plaza is a key stop on The Dale Trail — a self-guided tour that features more than 15 significant locations in The Intimidator’s life.

This initiative maps out 17 routes that people can walk, bike, or run throughout Kannapolis. The loops vary in length from an eighth of a mile to three and a half miles.