The Wallet that Lynda Smith Swann carries is old. A worn, creased, cracked, brown leather billfold. Inside is a $5 bill scribbled with the initials ECS. They are the initials of her father, Eddie C. Smith, and $5 is the amount that was given to him by the Junior Order Orphanage in Lexington on the June day in 1936 when he had to leave the institution where he’d lived since he was 8.

The wallet was discovered in a safe at National Wholesale, the business he founded, nine years after his death in 2007. Whenever Lynda, now president and chief executive officer of the company, was distressed about anything, her father would say, “Honey, as long as I have more than $5, that’s more than I left the orphanage with. We’ll be fine!”

Enthusiastic, gregarious, and given to outbursts of laughter, Lynda nevertheless isn’t keen on interviews, self-promotion, or publicity. She doesn’t tell the wallet story herself. But all of the 150 employees at National, as the company is now called, know it.

In the immense National Warehouse, just down the road from Lexington Barbecue, a pointelle cardigan sits on a counter, tagged with red tape. An employee in the quality control department has discovered a defect in the sweater, and she digs deeper into the box from the manufacturer to make certain that the rest are up to National’s standards. 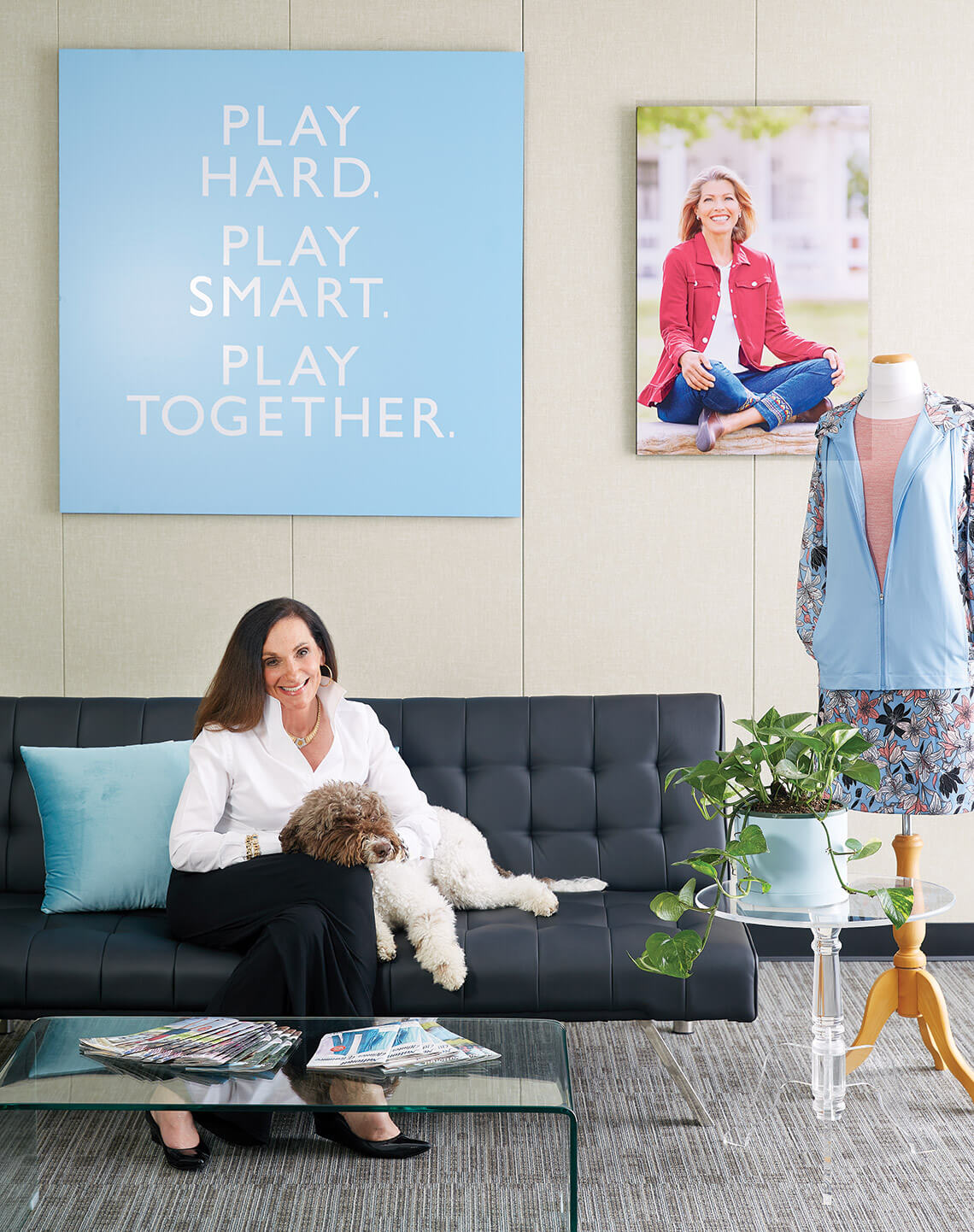 In her office, Lynda is making a phone call to a customer in Illinois. The customer is upset because she tried to cash a return check for $22 — mailed to her in 2014 — and the bank has refused it. National has since changed banks, but Lynda is making good on the seven-year-old check, personally contacting the woman and reissuing the check for $30, for inconveniencing her.

In the training area, call center employees are looking, learning, touching, and trying on the spring line of apparel so they’re able to answer every question a customer might have about fit or feel or the length of a sleeve.

In the design department, three women are pinning pants to a custom-made mannequin. The proportions need to be different because, these days, women stay fit longer than they did in the ’60s.

Upstairs in Studio K — named to honor an employee who had a 34-year tenure with the company — Creative Director Belinda Thomas is setting up a catalog shoot using one of multiple beach, front porch, or backyard backdrops with models from California, New York, and Italy. The in-house green screen means there are no worries about wind or sand or — these days — Covid-related safety concerns. Some 100 new styles are featured every season in catalogs mailed to two million customers 10 times a year.

All over the warehouse, Timmy, the CPO — Chief Puppy Officer — roams, and employees stop what they’re doing to stroke his fleecy coat. “We’re huggers here,” Lynda says, so during Covid, Timmy’s presence has become vital.

This is how the days go at National.

Eddie Smith’s parents died just before the Great Depression. At the orphanage, he worked on the farm with the other boys, pulling sweet potatoes, hauling milk, and tending Sam the mule. He and his 350 fellow “home kids,” as Eddie referred to his orphanage family, each had one pair of overalls and one pair of pants for Sunday church. At 17, Eddie had to leave the orphanage he’d so loved, where a darkroom had been built specially for him to nurture his passion for photography. His first job was as an usher at the Carolina Theatre, where he met Sarah Lanier. The couple eloped in 1939. Eddie became a taxi driver and, ultimately, the manager of Red Bird Cab.

Eddie recalled his fellow “home kids” with fondness and said of his time at the orphanage, “We were one big happy family.”

In 1952, he made a career change and founded a hosiery company. He called it National Wholesale, based on the concept of selling mail-order hosiery by the dozen to individuals and groups like nurses and teachers. As it still does today, the logo featured a map of the United States with a big star on Lexington, where everything the company sold was made in nearby mills. Lynda recalls sitting at the kitchen table as a child and stapling the company’s four color swatches to sample cards mailed to customers.

“You can’t sell a fashion item by mail; that’s stupid,” Eddie was told. In 1999, he was inducted into the Direct Marketing Association’s Hall of Fame along with two other catalog industry giants: Leon L. Bean and Eddie Bauer. Yet when he was dying of cancer, every day Eddie asked, “Could you just drive me through ‘the home’?”

“What did you feel like when the orphanage just dropped you on Main Street with only $5?” Lynda once asked her father. “Honey,” he said, “I thought, The sky’s the limit.”

National will celebrate its 70th anniversary in 2022. One reason for the company’s longevity is its intentional decision to serve a very specific customer. Early on, Lynda’s mother, Sarah, recognized that women were entering the workforce in droves, and they wanted to put on comfortable clothing after days spent in constricting stockings and tailored apparel. The “housecoat” was born, and included in the mail-order offerings.

“Living the comfortable life” is National’s motto, and its affordable clothing is geared toward women age 50 and above. Its loungewear, activewear, sleepwear, and lingerie are designed with ease in mind, for women who are tired of ironing, prefer pockets, or are beyond contortionistic struggling with back zippers, undersize armholes, or tiny buttons at necklines. In National catalogs, you’ll find caftans and cardigans, jackets and dickeys, panties and pajamas, plus dusters, day dresses, and “snip-it slips,” which customers can trim to the desired length. Never mind hats, shoes, totes, and a product that makes compression hose easier to pull on. Because, yes, National still offers stockings. 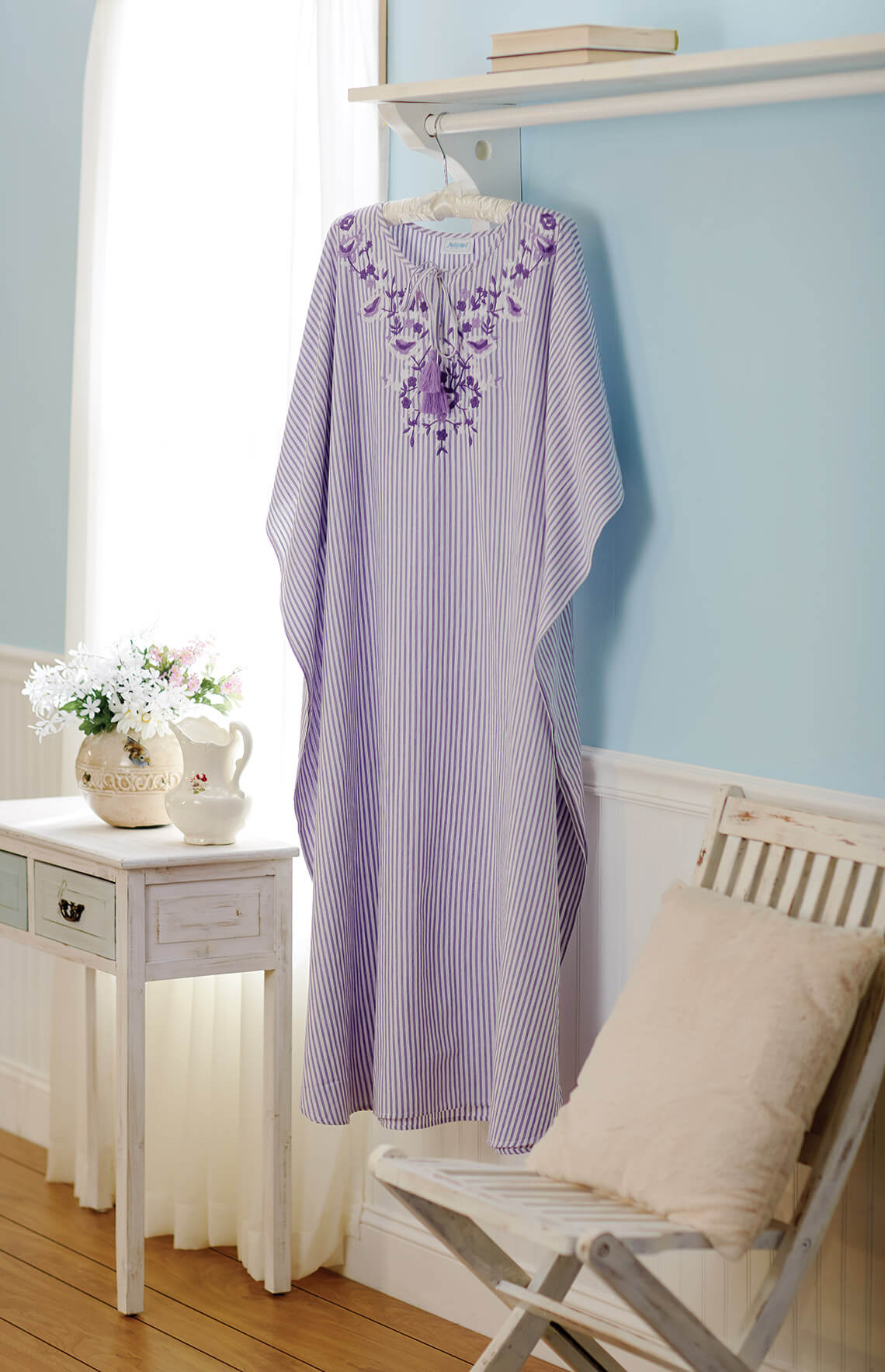 When the world moved to e-commerce, a consultant warned of hard times ahead for the catalog-based company. “Your customers won’t use computers,” Lynda recalls the doubters predicting. And like so much else that’s reflected in her father’s business, Lynda adopted Eddie’s attitude. “People would tell Daddy things, and he’d say, ‘Uh, I’m just not going to receive that. I’ve decided not to participate.’” She launched National’s website, totally reinventing the company while sticking with the mature market.

“No one is serving that woman well,” Lynda says. “And guess what? Your 80-year-old woman today is a very different person than in 1972. They can use computers. We’re so thankful to be dancing with the ones who brought us to the party.” Do not be dissuaded by a $14.95 dress that looks vintage. In a picture posted on social media by Hilaria Baldwin, wife of actor Alec, she’s wearing that dress. Lynda’s 36-year-old daughter, Parker, writes National’s blog, called If the Muumuu Fits, and her young readers are wild for National’s comfy styles. And all the while, National “stays in the head of the customer,” whom they refer to with the collective “she” or “the ladies”: “The ladies are going to love the feel of this polo.” “She won’t like this packaging box because she won’t be able to get into it.”

Eddie’s presence is all over the National Warehouse. In the framed covers of decades of catalogs; in the UNC memorabilia from a man who never went to college but became an ardent Carolina fan; in the oil painting of him wearing a striped suit and flowered Italian tie along with a mustachioed grin. From cars to clothes, “he loved everything Italian,” Lynda says. “He was a peacock” in his favorite pink sport coat and white pants.

Yet for this highly successful man, money never mattered, except to give back with. Over and over, Eddie paid his success forward. The Carolina Theatre, where he met the love of his life, is now the Edward C. Smith Civic Center of Lexington. He served a term as mayor. He was the first foundation chair to fund the community college, where nursing scholarships bear his and Sarah’s names. He raised money for the hospital and the library. Every year, he held a homecoming for the orphanage children, and when Lynda got married, he invited every “home kid” he’d ever known to her wedding, held outside so all 350 of them could attend. A family foundation supports the American Children’s Home, as the orphanage is now known.

Eddie spearheaded efforts to open Davidson County’s domestic violence center, which grew from his discovery of a beaten woman on the street during one of his daily morning runs. “This was the most important thing God ever let me be a part of,” Eddie said of the center, and its opening was the last event Lynda took her father to before he died.

Lynda grew up toting mail bags of order forms and roller skating in the National warehouse aisles. As children, her two daughters were models for the catalog. Until he was 85, her father was active in the company, still jogging, still reading a daily devotional, still making biscuits and breakfast for his employees every Monday morning because he wanted them to be as happy to come to work on Monday as they were to leave on Friday.

At the age of 88, cancer finally felled him. Yet “he died never having had a headache,” Lynda says, “because he had no anxiety.” His generosity and gratitude and optimism live on at National, where, “if an employee’s car breaks down, she knows she has 149 friends to call for help.” Where employees never rush a call-in customer, because they know that they might be the only person that customer talks to all day. Where Eddie’s simple admonition to “treat every customer as if they were your only customer” endures. 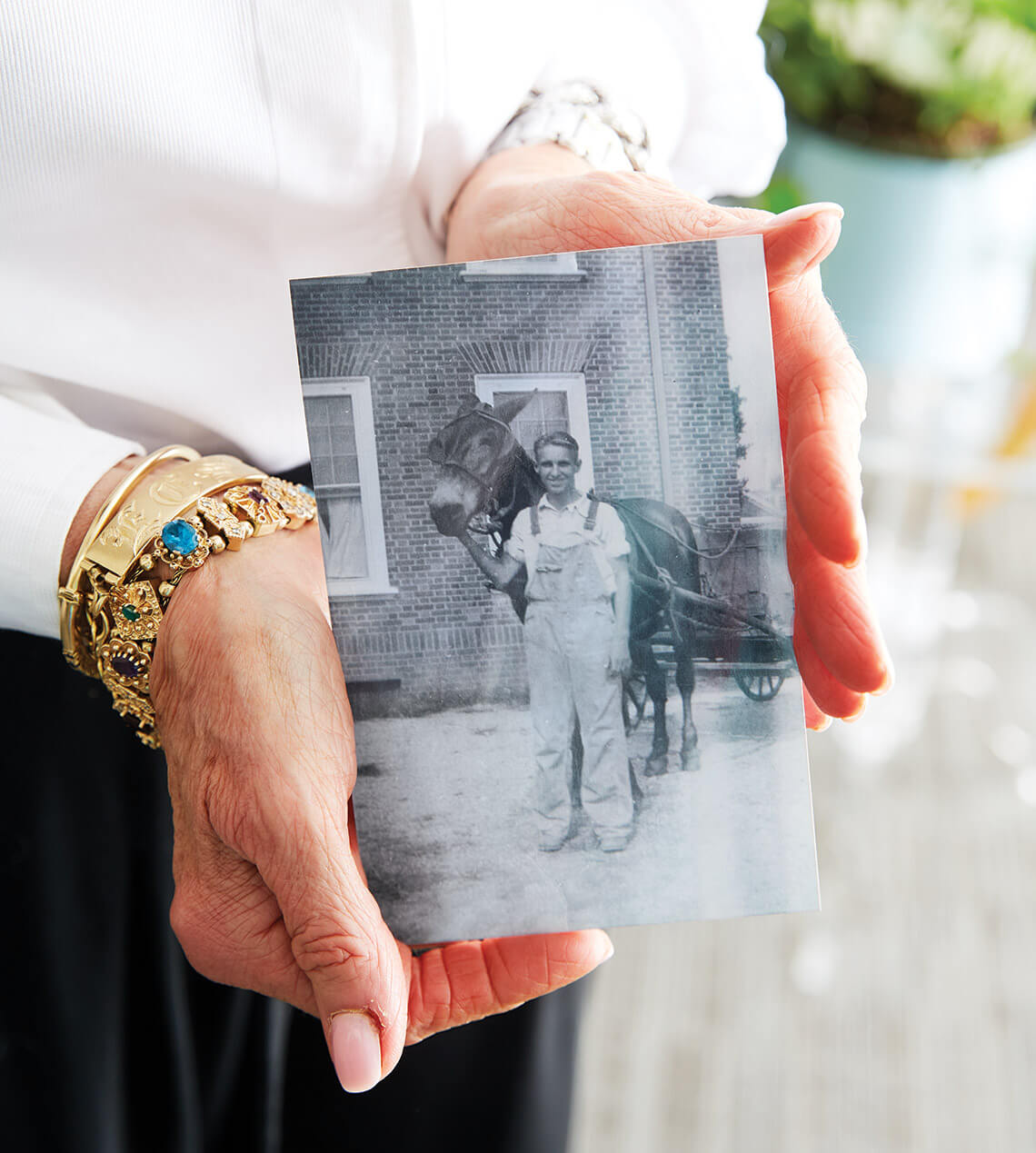 After all his success in the mail-order clothing business, one of the things that National Wholesale founder Eddie C. Smith was most proud of was tending Sam the mule at the orphanage where he grew up. Each of Eddie’s family members has a photo of him with Sam. photograph by Stacey Van Berkel

When Eddie learned his cancer was terminal, one of the home kids, who’d become a vice president of the UNC hospital, came to visit and offer condolences. “Bill,” Eddie told him, “I’m the luckiest guy in the world. My parents died and I got taken to the orphanage, and now I have cancer and I can see the Dean Dome outside my window.” Lynda shakes her head. “Who would think they’re blessed because they were orphaned and got terminal cancer?”

Here’s who: A man who built a local business that was named National, known nationally, and received national awards. A man who had local pride and did local good. A penniless, parentless kid who stepped out on a Lexington street, thumbed the $5 bill he’d been given, and thought to himself, “Wow. The sky’s the limit.”