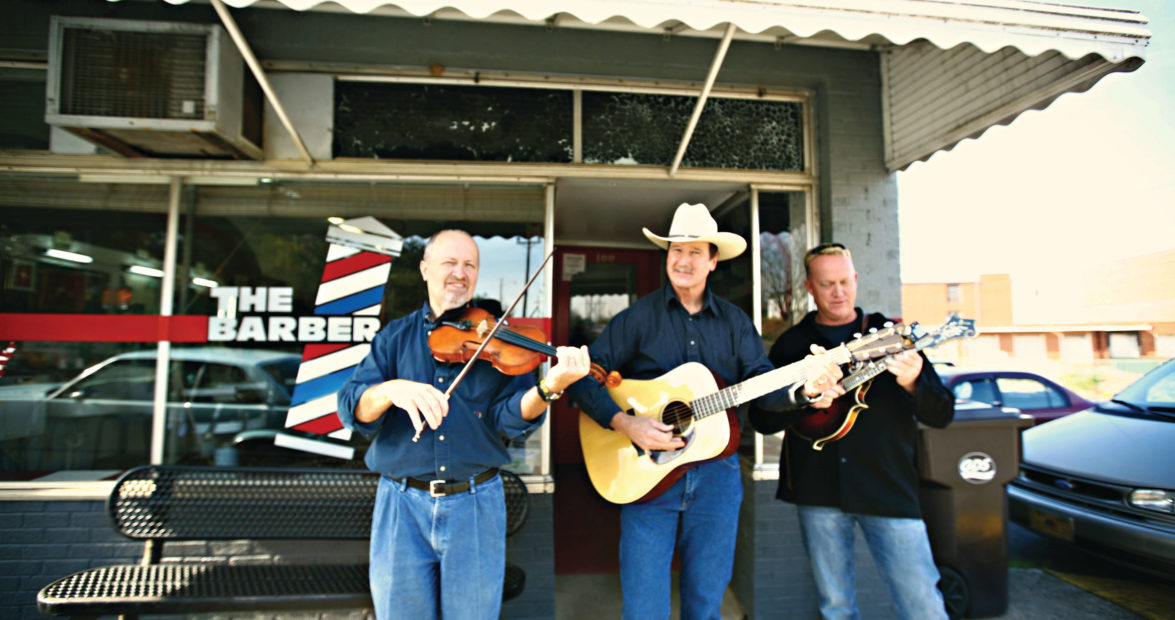 Just off Interstate 40 between Hickory and Morganton, down a winding road, past some forlorn buildings on the main drag, there’s an empty chair in a barber shop. But the sound is still alive.

Lawrence Anthony cut hair here for more than 50 years. During that time, he started one of the most happening weekly bluegrass sessions in the state. When he died this past December, everyone knew the jams must go on. Anthony’s son, Carroll, is seeing to it.

“I have every intention to renovate the place and keep it open as long as I can,” says the younger Anthony. Carroll, who discovered some water damage, plans to renovate the shop, taking care not to disturb the venue’s comforting familiarity. “[People] shouldn’t be able to tell anything’s changed.”

Music at The Barber Shop goes back more than 40 years. “In March of ’64, we started playing, me and the chief of police,” Lawrence Anthony said in a 2009 interview. The chief was a mandolin player, and his office was only two doors up the street. “And in a little town like Drexel, he wasn’t real busy. I wasn’t either sometimes. I kept my guitar at the barbershop. Sometimes we’d strum one time, see if we was in tune, then he’d get a call or I’d get a customer.”

The next time they picked up their instruments, they may have played for two hours. Then a banjo player down the street came up, heard the music, and joined in. “And first thing you knew, over the years it just got bigger and bigger,” Anthony said.

The shop looks like the den of a confirmed bachelor, and part of its appeal stems from an atmosphere that invites visitors to linger. A couple of barber chairs in the forefront sit on a red-and-white-checkered linoleum floor, but the rest of the shop is decked out with a large, comfortable sofa and some mismatched, overstuffed chairs that look like they may have come out of your grandmother’s house. Polaroids of folks clutching instruments paper the walls, and a couple of guitars mounted on the wall near the door to the back room have stories of their own.

“That one went through the war,” Anthony said last summer, referring to the guitar festooned with two small American flags. “My outfit was 737 Tank Battalion. We was spearheaders for Patton’s third army. He sent us out there, led us out there most times. He wasn’t the kind of guy to say, ‘Go on up yonder, I’ll be there.’ He said, ‘Follow this little jeep.’ He’d take you right on up there.”

That’s where Anthony’s guitar was, in that third army tank all the time. He’d play at night, or when there was a break.

Carroll Anthony has his own attachment to the guitar. “I actually learned to play on that old thing myself,” he says. “I was probably 12 or 13. He showed me a few chords to get me started, and I took it from there.”

Carroll may be running the shop, but David Shirley, Lawrence’s business partner for 40 years, continues to do the haircutting. Shirley was Anthony’s go-to man when haircut troubles loomed. If your requested hairdo veered too far from Anthony’s standards, he’d move you right along.

“He’d give me his problems,” says Shirley, a virtual comedian flinging zingers at everyone who crosses his path. “He knew how I would handle them because it’s hard for people to be mad if you’re laughing with them and not at them. … You know nothing’s forever — there’s not but about seven to 10 days between a good and bad haircut.”

Lawrence didn’t make it to the shop too often toward the end. But he didn’t need to be there to know what Saturdays looked like, sounded like. A pot of coffee brews in the corner, and bowls of roasted peanuts sit on a table in cut-off bubble gum jars where patrons dip in on a regular basis and help themselves to a mouthful. Even though there’s plenty of verbal entertainment, the main attraction on weekends is the music. In the back room, a group of pickers and players is seated in a rough circle.

But this is no amateur jam session. These guys play like pros, ripping through bluegrass chestnuts with an easy grace that speaks of years of string plucking. More musicians drift in through the back door during the day, but most sit on the edges of this core group of pros in the inner circle. Nobody counts off. One player starts, and the rest just fall in. The music flows smoothly, solos stitching the music together seamlessly. This stuff is good enough for a recording session.

“We’ve had some of the best musicians in the United States right there in that barber shop,” Lawrence Anthony was fond of saying.

Mandolinist Herb Lambert has toured the country for the past 20 years with R.W. Lambert and the Blue River Boys. The band used to play the fiddlers convention at Union Grove. “We played there when the Blue River Boys first started, but they fired us out of there,” he says.

It wasn’t because the band wasn’t good enough; it was because they were too good. “They told us we could entertain there,” Lambert says, “but they wouldn’t let us play in the competition.”

One Saturday, the 82-year-old demonstrates some of the licks that got the band thrown out of Union Grove on the Bill Monroe instrumental “Southern Flavor.” Although he’s still so speedy that his fingers are barely visible as they fly over the fingerboard, he claims that age has slowed him down some. “Back one time, I could move my fingers so fast people didn’t know how they moved over a fingerboard that fast,” he says.

Lambert’s in good company here. The seasoned players fire off one tune after another, galloping along at a pace that even has some of the vets shaking cramps out of their fingers. It’s not long before banjoist Jo Jo Patton cuts loose on “Whoa Mule, Whoa.” He’s the Eddie van Halen of bluegrass, working the frets like a rock god, playing below the bridge, then tapping on the belly of the banjo, moving on to scratch out a rhythm high up on the neck where the tuning pegs are.

He’s not the only hotshot in this bunch. Even though Flatt and Scruggs’s “Foggy Mountain Breakdown” is a banjo showcase, guitarist David Carswell turns in some fleet-fingered flatpicking on the tune. David Wiseman, who had been playing mandolin, switches to fiddle for an achingly beautiful fiddle duet with Roger Ledford on “Faded Love.”

As the afternoon flies by, the tunes keep flowing. “We can sit down and play all day and never play the same tunes,” Lambert says. “We meet there occasionally and have music that sometimes lasts for three or four hours.”

Even though this Saturday’s huddle sounds like a bunch of pros, anybody can join in. “Most of those guys are just players,” Wiseman says. “They ain’t a band, just whoever shows up and picks; ain’t no matter what level they’re at, they’re welcome.”

A gathering like this is the best way for a young or inexperienced player to learn. “That’s one thing about most of the bluegrass community, they’re pretty good about playing with people that are learning,” Wiseman says. Sure enough, tucked away in the dim corners of the room are a couple of youngsters, eyes focused intently on the hands of the inner-circle players, their own hands moving hesitantly over the necks of their instruments as they try to keep up.

Lawrence Anthony’s funeral was a fitting tribute to a man who played host to what amounts to a community center, unofficial town hall, and warm, inviting place for friends to gather for four decades. The Barber Shop Bunch, a loose-knit group of local pickers who have frequented the shop’s jam for years, gathered to play for him one last time.

“Lawrence was just a fine gentleman,” says Lambert, one of the Bunch. “Always a good, truthful guy — you could depend on what he said, and he was a good friend. And he loved bluegrass music with a passion.”

Despite worries that the tradition would end with Anthony’s death, the very next weekend the shop was packed with pickers. And as long as the doors are open on Saturday mornings, the future of the jams seems bright. “Well, they’ve been a-showin’ up for about 50 years down there,” Lambert chuckles. “You see friends you don’t see any other time.”