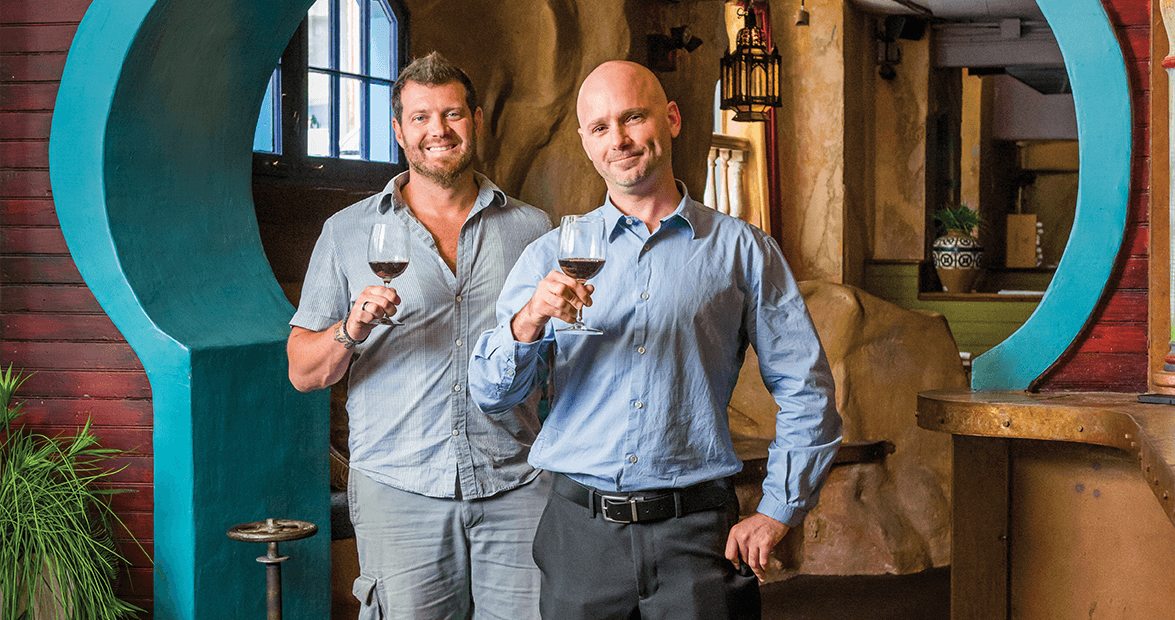 On most afternoons, merry bands of strangers troll downtown Asheville’s sidewalks for caches of riches hiding behind unassuming doors.

But these folks in shorts and jeans and tank tops aren’t no-goodniks planning a hit or heist in the midst of a bustling city center — peace-and-love-centric Asheville doesn’t really roll that way.

Rather, they are culinary adventurers on a walking journey through some of the city’s finest restaurants, their mission to discover treasures like duck confit and carbonara frittatas, corn cakes made from ears picked that morning, berry cocktails and frisky sangria loaded with fresh fruit from the next county over.

Eating Asheville Walking Food Tours have become one of the hottest tickets in town, growing in three years from seasonal once-weekly outings to year-round daily tours that sell out quickly. Eating Asheville founder and owner Stephen Steidle delights in his entrepreneurial success. He also never tires of leading his tours of indie restaurants that are both tony and trendy, and are also living the vision of farm-to-table, go-local commerce.

“Asheville is becoming a mecca not just for beer, but for great food — it’s becoming a culinary hot spot, clearly, and it just keeps attracting people who want to support this focus on farm-to-table food,” Steidle says.

“And all of these businesses also work hard to create a local clientele, whatever niche it’s in, to create that fan base and build on that,” he says. “Everybody in Asheville wants to talk about their favorite chef.”

Foodies begin their tour at the Battery Park Book Exchange and Champagne Bar in the Grove Arcade. They’re strangers when they meet, but after a few sips of sparkling wine — enhanced by the comforting fragrance of leather easy chairs and hundreds of books on towering shelves — they are quickly united in friendly anticipation of what’s to come.

After tastes of smoked trout and goat cheese, they raise their glasses for Steidle’s cheery toast “to a successful culinary journey,” and with a clink of crystal flutes, they are ready to unwrap some of the city’s gastronomical gifts.

The next two and a half hours are an easy-paced stroll — well, except for the fact that Asheville is a hill town — winding through the city center for a diverse array of small-plate samplings from six of the tour’s 15 partner restaurants. Dishes range from modern Italian fare and Spanish tapas to American comfort food and artisan chocolate truffles, paired in some instances with fine wines and creative cocktails.

The walk from site to site becomes a player itself on the tour, the tapestry of colorful storefronts, alfresco dining, street art, buskers, and street performers offering happy distractions that often cause tour members to straggle behind.

Steidle drops tidbits of Asheville history and whimsy as he leads his entourage. He cites the city’s celebrated Art Deco architecture, its role as a film destination, and the downtown’s recovery from when the first mall came to the outskirts of town in the ’70s and the city center became a ghost town, only to be reborn into the vibrant arts and culture destination it is today.

And now, food destination is added to that list, drawing culinary tourists, renowned chefs, and others in the food industry who want to live and work in the city where many locals’ car bumpers proudly sport the slogan “Keep Asheville Weird.” 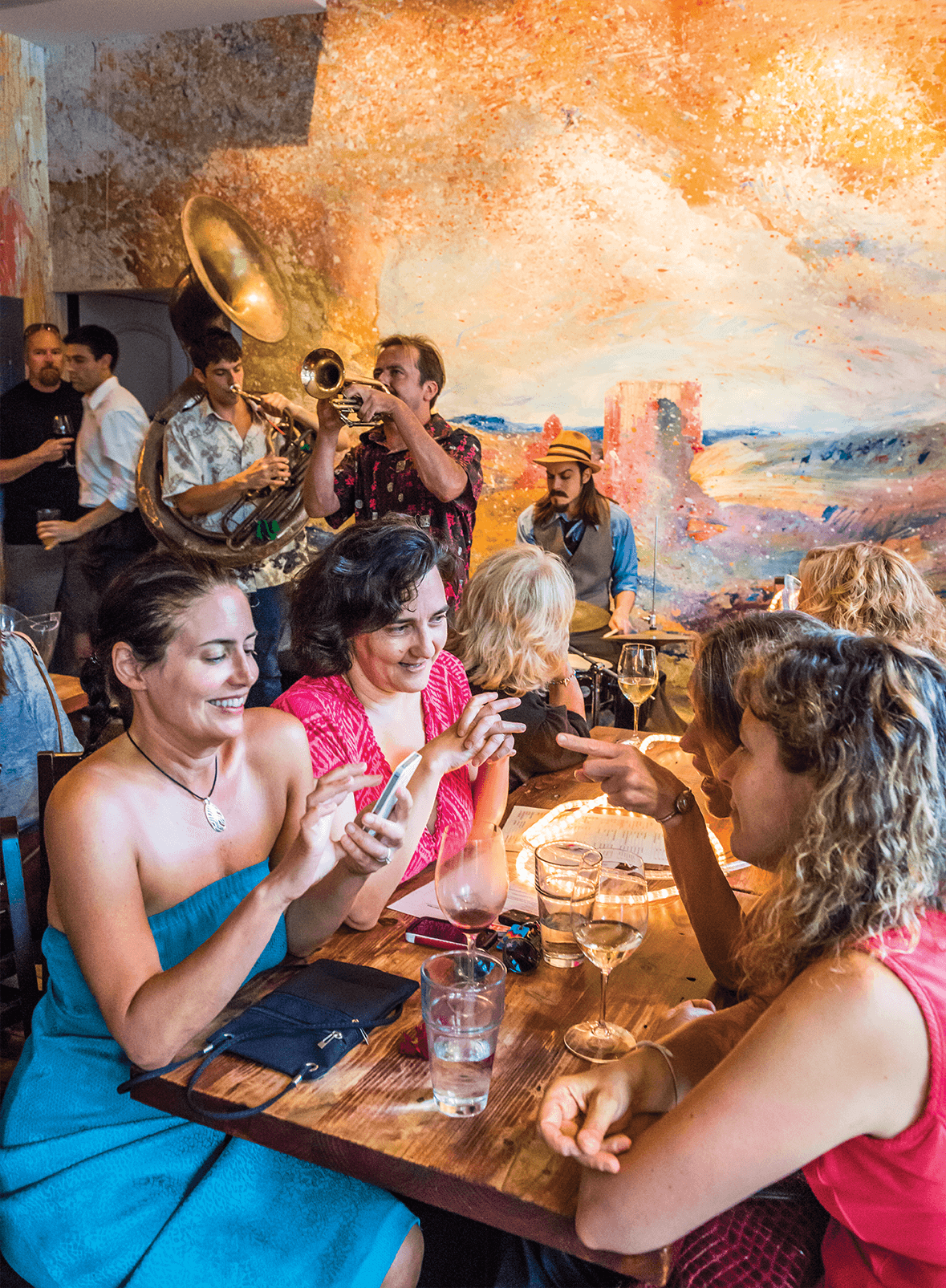 When Steidle chose the restaurants he wanted to partner with on his tours, the first criteria was a commitment to the local-first worldview that is prevalent throughout downtown. Here, nearly every store window has a “Love Asheville — Buy Local” poster, and residents receive discounts by using Go Local cards issued by merchants with the Asheville Grown Business Alliance.

Another wish-list item was that chefs not only be willing to use locally produced meats and produce whenever possible, but also reverse the mainstream standard of making food fit a set menu instead of building menus around the food.

“We wanted to create something that was ‘Asheville,’ ” Steidle says. “I love history and those kinds of living concepts like, if it were 100 years ago and we were all living in a village together — you’ve got tomatoes growing in the backyard, so that’s what you eat.”

Most restaurants on the Eating Asheville tours are invested in that concept, printing new paper menus daily based on what’s in a farmer’s tailgate-market booth or growing in his or her western North Carolina fields on a given day.

As Canipelli works before his audience in a T-shirt and baseball cap worn backward, he explains his simple concept of food, noting wryly that his eatery puts a fresh twist on Italian cuisine and is “not a place you’ll find fettuccine Alfredo.” Instead Canipelli serves items like Alpine Bay oysters and chilled octopus, roasted cauliflower, and “24-month prosciutto di Parma.”

“Everything except for one vegetable on the menu comes from local farmers and tailgate markets,” he says, skillfully plating his fresh-from-the-market offerings for his guests. “We have people who go into the woods to find mushrooms for us — we bring ingredients into the restaurant, and then we make our menu. It’s fun not to do the same thing over and over again.”

Asheville’s evolution into a food destination isn’t limited to epicureans. The city increasingly draws food-industry professionals who enjoy its lifestyle as well as its foodie vibe.

“People with the highest skills want to come here because the quality of living here is so great — we have four seasons, the mountains — that’s the reason I was attracted to come here from Santa Fe,” Steidle says. “A lot of people are overqualified, but want to come here for those reasons — there are people in the industry who have master’s degrees and Ph.D.s working as waiters and bartenders just so they can live here.”

Indeed, this small city boasts four chefs who have been nominated for prestigious James Beard Foundation Awards, including three-time nominee John Fleer, who is opening a restaurant this fall on Pack Square in the heart of downtown.

Despite there being dozens of restaurants in the city center, there seems to be an absence of competition among them. Rather, there is a sense that a vibrant downtown with myriad culinary offerings can only draw more diners who appreciate quality cuisine and are willing to support the restaurants that provide it.

“It’s that variety that draws foodies to town — it provides that synergy that brings people here and gives them the diversity they desire,” says Newton Clark, manager of Chestnut on Biltmore Avenue, where tour participants sample beer-battered fish and chips.

“There’s nothing better than getting out, seeing the ambiance, and getting a taste of the food and the energy of the staff,” Clark says. “And maybe you leave with a new favorite restaurant,” he adds with a grin.

Barbara Blake is a features writer for The Asheville Citizen-Times and a two-time winner of the Thomas Wolfe Award. A lifelong resident of Asheville, she never tires of discovering the obvious and hidden charms of her mountain city.