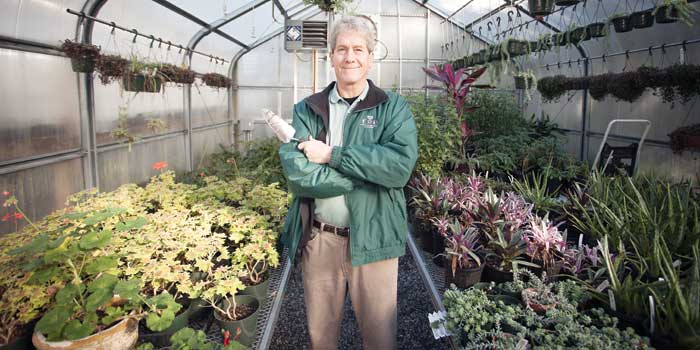 Jeff Lewis kneels on the edge of the Great Lawn. He’s burying golf-ball-size allium bulbs. They smell faintly of onion, and he jokes about taking one home for dinner. He moves so fast over the pine needle beds he doesn’t bother with a mat or a piece of cardboard for his knees. His spade is crusted with earth.

Nearby, a dozen volunteers — a father and his two young children, a pair of high school girls, a handful of retirees — make their own versions of Lewis’s process.

The bulbs need to be buried deep enough to keep the squirrels out, about three inches, Lewis says. The roots, like fringe, go facedown in the dirt, the tiny sprout faceup. That’s it, Lewis says. That’s all there is to it. Come late spring, the allium produces giant, purple heads on waist-high stems, a proud scattering of royal-hued jewels in The Elizabethan Gardens.

The gardens are a 10-acre emerald in the belly of Fort Raleigh National Historic Site — that storied place on the Outer Banks where a colony of more than 100 English men, women, and children vanished into the ages more than four centuries ago. The failed attempt at colonization predated Jamestown by two decades and gifted those future settlers with lessons that would lead to their success.

But what, a group of influential women asked themselves in 1950 during a visit to Roanoke Island, if the Lost Colony had not been lost? Perhaps they would have planted a garden that reminded them of home.

Lewis is now standing at one of his favorite spots in the garden: under the sprawling canopy of an ancient live oak that’s too big to get your arms around. A core sample of its massive trunk revealed that it was here at the time of the colonists.

In 1951, the women — one of whom was the wife of a philanthropist; another was a celebrated historian and writer — decided to ask The Garden Club of North Carolina to help create a two-acre garden near Fort Raleigh, a kind of living memorial to the colonists.

It would grow much bigger than those two acres, of course. The idea was like one of those little allium bulbs that, once planted, sprang forth and flourished beneath the dedicated and nurturing hands of many.

On August 18, 1960, exactly 373 years after the birth of the first English child in the New World, The Elizabethan Gardens opened for tours. The first child, named Virginia Dare, disappeared along with the rest of the colonists.

The Garden Club women had acquired garden statuary older, even, than the failed colony, a coup that made the modest two-acre plan five times larger. They hired the noted landscape architect Richard Webel of the New York firm Innocenti & Webel, which also had a hand in Tryon Palace in New Bern. It is said that Webel approached his designs like an artist approaches canvas. He thought about the location; The Elizabethan Gardens would nudge against the Roanoke Sound on the north end of a legendary barrier island. Webel considered colors and shapes and sizes. He considered the statuary — an ancient Italian fountain and pool with balustrade; a mount and wellhead; a sundial; and stone steps, benches, and birdbaths.

There is a mix of exotics and natives: camellias sprouting pink and peppermint blossoms from golden hearts, Daphne giving off the sweet scent of honeysuckle, blushing ‘ollioules’ tulips, frothy cherry blossoms, beds of daffodils, hibiscus, and great southern magnolias.

He chose as the centerpiece the Sunken Garden, with low walls of old, handmade brick and parterres of manicured dwarf yaupon — 32 in all.

From this formal inset, the gardens extend in every direction. One path winds all the way to the Roanoke Sound. Another leads to the marble-carved wellhead trickling in the shadows of thick, gnarled branches and, deeper back, a statue of Virginia Dare — one artist’s interpretation of what the first English child might have looked like in young womanhood. She stands dreamily in an enclave of hostas and azaleas, in front of a climbing live oak, her arms crossed, a fishnet wrapped haphazardly at her waist.

Away from the sound, just off the Great Lawn, lies the Queen’s Rose Garden, with symmetrical bricked beds of thorny climbers. One, called the Grandiflora Rose, arrived here from Windsor Castle in 1976, a gift from Queen Elizabeth II to the gardens, in honor of the U.S. Bicentennial. Construction on the gardens had begun the day the monarch ascended the throne, on June 2, 1953.

To reach the Queen’s Rose Garden you must pass the queen — a bronze nine-foot likeness of Her Royal Highness Queen Elizabeth I in all her opulent splendor, clutching an armful of roses. Erected in 2006, it is the largest sculpture ever created in her honor.

In 2007, when it was time to update the gardens’ master plan, the landscape architect recommended opening up the view to the sound, which had become obstructed by growth over the decades.

The gardens today offer a sweeping view of the water, just as they did in the beginning.

In a matter of minutes, Lewis has emptied his bucket of bulbs and heads off to the workshop that doubles as his office for another batch. On the way, he stops to check on the volunteers who have shown up to plant 2,000 bulbs on this Saturday morning.

Lewis first saw The Elizabethan Gardens at age 10. His mother has a picture of him here. It is the only proof of the visit, since he has no recollection of it. He was born in Pitt County but grew up all over the place; his dad was career Army. His mother made a garden spot everywhere the family lived and filled their home with potted flowers and plants. Lewis often visited his grandmother in Martin County, who, he says, “was more of an inspiration than anyone.”

She had burgeoning plant beds and a vegetable garden. Lewis preferred the outdoors to anywhere else from the time he could walk, and he helped his grandmother as often as he could. He learned the names of native plants, dug in the dirt, snapped beans and shelled peas and shucked corn. He admired seeds sprouting in glass jars on her windowsills, the seeds’ tiny roots suspended in water.

At the end of each visit, she’d extract a plant or two from her gardens for Lewis to plant in his own yard.

After a stifling office job, Lewis looked for outdoor work in his favorite part of the state. He came to the gardens as nursery manager 19 years ago. Over the years, Lewis filled in intermittently as garden manager, until he was officially put in charge of both the nursery and the gardens in 2005.

There is something about being able to see the product of your labors, he says. Spring is the best time for that. “The birds are singing. Everything’s waking up. The days are getting longer and warmer. There is so much in bloom.”

Lewis is one of just 14 employees. There are a hundred volunteers at any given time, and they are vital to The Elizabethan Gardens. Some give a few hours once or twice. Some come and stay for years, like 81-year-old David Martin, a retired engineer who adopted the rose bushes five years ago. He prunes and feeds and waters and sprays to keep the fungus off. He recently enlisted his son, Richard, a retired principal. David is the expert, Richard insists. He just keeps the ground clean. Together, they free up the small staff to focus elsewhere in the gardens.

Jerry Ryscavage needed something to do in retirement after his wife started substitute teaching in the late 1990s. “I would come out here to the garden and spend some time,” he says.

He kept coming back.

Ryscavage does anything he’s asked, from working in the greenhouse to dead-heading hydrangeas. “Many, many retirees would like to have a place like this to putter around in and get their hands dirty,” he says. “It’s a catharsis for a lot of people.”

“Anyone ready for a brand-new section?” he calls out.

Some of the volunteers, having finished their sections, are packing up, brushing dirt off their pants and shirtsleeves. Others are still digging, and they’ll work until the last of the bulbs are planted.

This spring, Lewis and the others get to see the fruits of their labors, blossoming anew in the shadows of ancient oaks.

Kristin Davis is a freelance writer who grew up in Goldsboro. She now lives in Fredericksburg, Virginia. Her most recent story for Our State was “Magnificent Stitches” (December 2012).