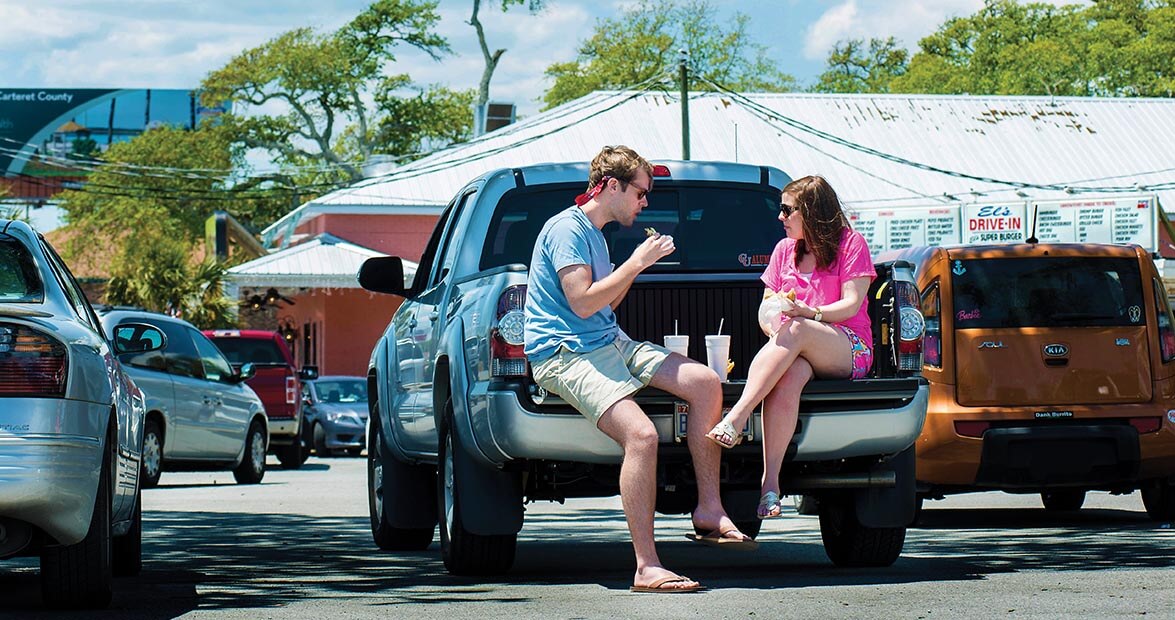 I expected teenage girls on roller skates. But what greets me instead as I turn in to El’s Drive-In in Morehead City are two women, comfortably beyond teenhood. They’re walking — make that hustling — across the blacktop. One sports flip-flops, the other sneakers. One is in denim shorts, the other in a denim skirt. Both wear black apron pouches around their waists and black shades over their eyes.

Across the asphalt, I find an opening between a newish BMW and an oldish Chevy van. The sneakered woman aims for my car. She has a guest check booklet and pen, and her name is Contrell Helton, though everyone knows her as C.C. She’s worked as a carhop here at El’s for 15 years. “It’s strenuous,” she says, “but it’s fun.”

Like milk delivery or the drive-in movie theater, the carhop has largely rolled off the American stage. My experience with carhops barely extends beyond Sonic and Happy Days episodes. As a child of the post-doo-wop era, I grew up with drive-thrus rather than drive-ins, which means I know all about eating in cars and letting lost fries petrify under the seats. But the food always comes after speaking into a squawk box and handing money to someone wearing a headset. This is different: Someone is coming out to me, in sunshine or in rain, to deliver my bagged bounty of carbs. So I settle into the driver’s seat and prepare to down my umpteenth fries-with-that meal behind a steering wheel.

El’s is short for Elvin Franks, who opened the place in 1959, back when cars flashed big fins and brash chrome. The kitchen is the same building of tan brick (no seating space inside, by the way) with a lighted menu across the roof. Its offerings haven’t evolved much, either. A sampling:

And as a swipe at our swipe-happy culture, there’s this sign on the front window: NO Credit or Debit Cards. I give C.C. my order and make a stale remark — “This place is a dying breed” — to which she says: “It’ll take an act of God to get rid of El’s.” She’s probably right. The place is still owned by the late Elvin Franks’s son, who’ll pass it down to his own son, who plans to keep people returning to this throwback well into the 21st century. 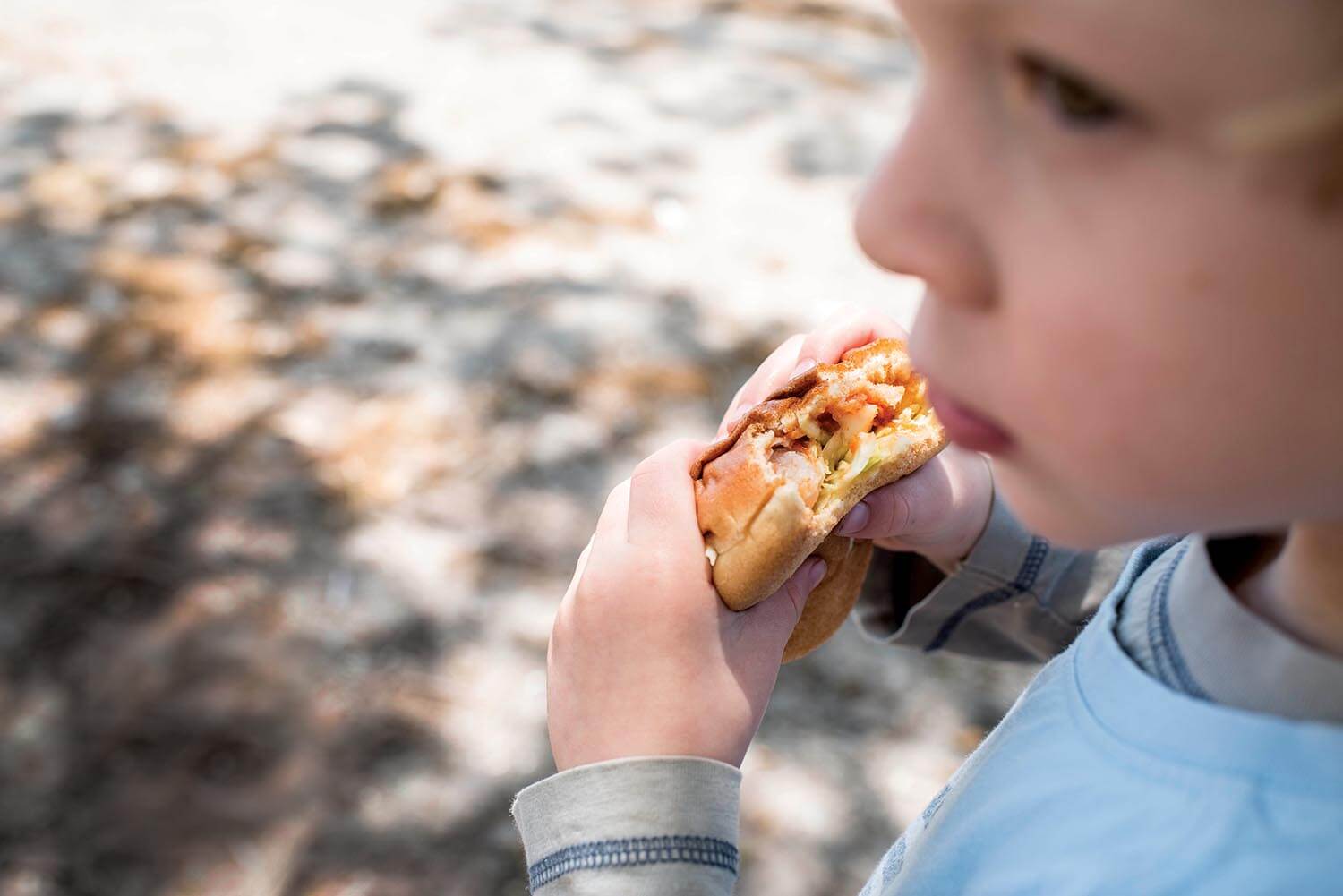 Now, about that word, “carhop.” It’s a word existing exclusively in the American vocabulary, a vocation unknown in countries whose cultural identities aren’t driven by the automobile. America, with its sweeping distances and endless independent streak, came of age in the era of the automobile. Seizing upon this American mobility, entrepreneurs looked for ways to keep man and machine together while providing goods and services.

In 1921, a businessman in Dallas, Texas, opened a diner with a very North Carolina-sounding name: the Pig Stand. Patrons could drive up in their roadsters and sedans while waiters — all male at first — came out to take their orders. They became known as “carhops” because each would jump on the running board of a car as it pulled into the parking lot. This was how the waiter, always fishing for tips, claimed a customer to serve.

By World War II, as men shipped off to battle, young women hopped into the carhop role. It proved a successful business move: Pretty girls in cute uniforms could get more cars in the lot and more burgers out the door. Through the ’40s, ’50s, and ’60s, drive-ins became synonymous with roadside America.

Even the hapless Clark Griswold encounters a carhop in the first National Lampoon’s Vacation movie. Sitting here at El’s, I chuckle, remembering the food tray shattering the window of the Family Truckster. At El’s, they don’t stick food trays on the windows anymore — not necessarily in fear of a Griswold-like mishap; it’s to keep trays from ending up missing.

“They’re all at our houses,” says Teresa Purcell, who’s waiting for her food beneath the shade of live oak trees in the parking lot. “I don’t think there’s any of us who didn’t leave with one some time or another.” As a teenager in the late ’60s, she’d always come to El’s after ball games.

Jim Godby, perched on his pickup, remembers coming to El’s as a child in his father’s 1965 Chevy Impala. With a tray of food on the window, “Dad would pass it out, and we’d all sit in the car and feed the seagulls,” he says. In his teenage years, Godby brought dates here before catching a movie. “It’s just a part of life here in Carteret County,” he says.

Being outside in the sun is what C.C. appreciates about her job. But no matter the weather, El’s is open seven days a week, and, “Probably the best time to get a tip is on a rainy day,” she says.

From the window, a cook motions to her to wrap it up. C.C. and her co-carhop Lisa Mayo bounce from kitchen to car door. At one point, C.C. emerges with an armload of at least six bags — she’s carried up to 13.

“I just don’t know how they keep it all together,” says Debbie Wilson from her van. “They’ll come out here with all these bags and everything is right. You go to a drive-thru and nothing’s right.”

Wilson, too, came here as a child. Now she comes as much for the nostalgia as for the all-the-way cheeseburger. “It just brings back a time when things were simpler,” she says. Back when eating in our cars was more of a novelty than a necessity in our time-starved lives.

Drive-thrus are convenient, yes, but they’re more routine than ritual. The very abbreviation — thru for through — carries the connotation of getting you in and getting you out quickly. Drive-ins invite you to keep the windows down, cut off the engine, and crank up some Otis Redding.

El’s brings in all kinds: SUVs and a red Corvette, a bicycle and a recycling truck, pickups with contractor logos, white sedans with government license plates, and my prudent little Prius. Weaving among them all are the two carhops, with C.C. delivering that all-the-way cheeseburger to the Chevy van. She reaches into her apron pouch for some dollar bills. But her customer just smiles, and says, “You keep the change.”