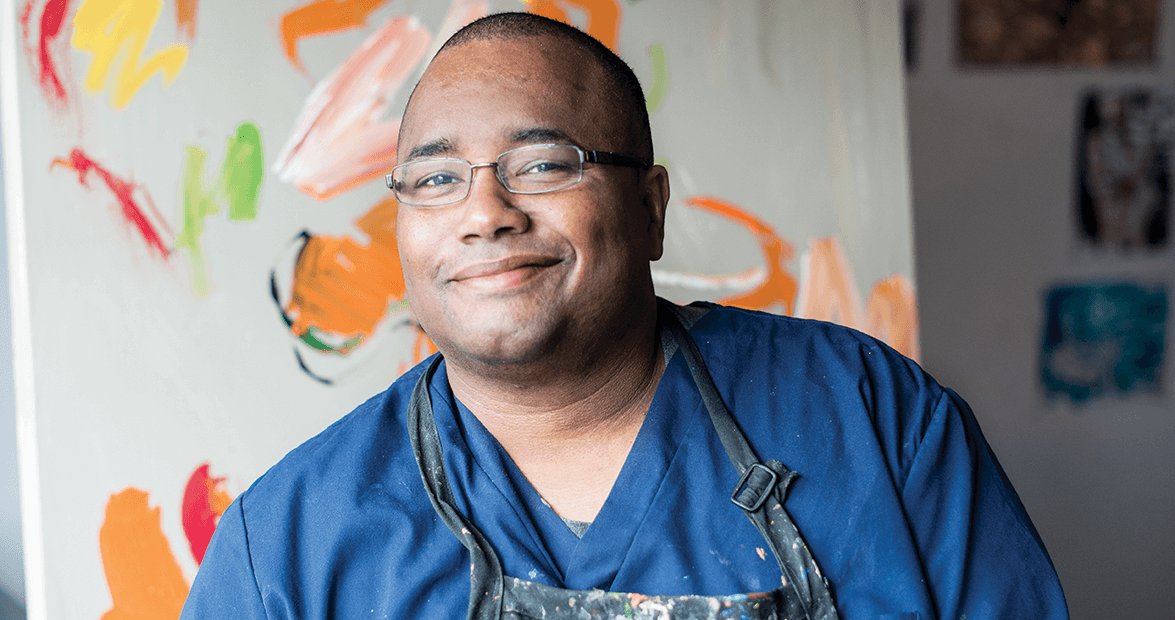 Sunlight stretches through an uncovered window of an Artspace studio in downtown Raleigh. Cans holding paintbrushes, paint-splattered chopsticks, and turkey basters cover most of the desk. Colorful paintings of iconic North Carolina landscapes and dynamic jazz musicians take the focus of the studio.

Many North Carolinians would recognize these images and have a connection to them immediately. Studio owner Eric McRay’s approach to art is all about connection. And plenty of people have noticed. His work has been collected by Duke University and the North Carolina Central University Art Museum. The News & Observer named him an “artist to watch” a decade ago.

McRay knew he wanted to be an artist in the first grade after he helped his teacher create a bulletin board about the fairy tale Rumpelstiltskin. “She raved about it,” McRay says.

After realizing he wanted to follow Michelangelo’s and Picasso’s lead, McRay pursued acrylic painting in college. Now, he produces about 150 paintings per year.

McRay moved to North Carolina following graduation from the Maryland Institute College of Art. He began a new life in a state where he had roots, as his father was originally from Maxton.

For McRay, it’s important that his art isn’t regarded as elitist. “I’m trying to welcome people in to be better educated about art,” he says.

Whether it’s paintings of landscapes or jazz musicians, inspired by the same improvisation that drives jazz music, McRay attempts to evoke emotion in his artwork. His love of North Carolina — where he has created a home, a family, and a successful career — enables him to express the spirit of the state, captured through his energetic paintings.

“I’ve just fallen in love with the culture of North Carolina, and I feel right at home,” McRay says. “I am where I’m supposed to be.”