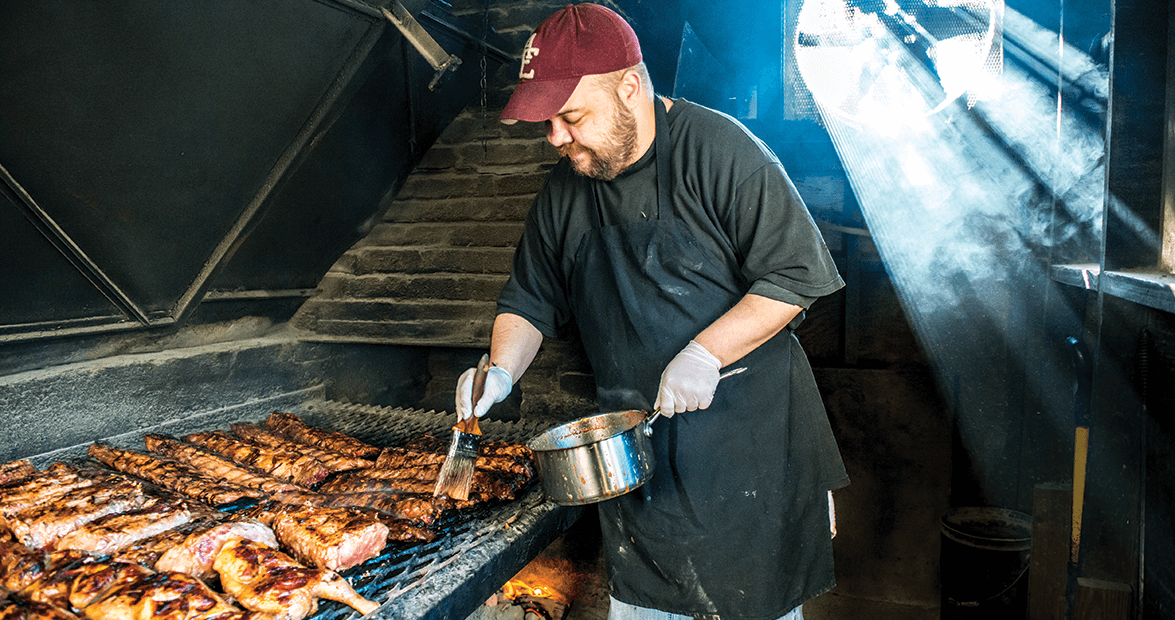 Herb’s Pit Bar-B-Que is all alone. There’s not another business in sight. The community is Hothouse. The address is Murphy, but that’s misleading. The building sits some 15 miles west of Murphy, in the state’s far southwestern corner. It’s four and a half miles west to Tennessee. Three miles south to Georgia.

But this out-of-the-way location has worked for the Gibson family for more than three decades.

Herb Gibson began his barbecue experience by feeding fellow copper miners in the nearby Tennessee towns of Ducktown and Copperhill. In 1982, he decided to parlay his reputation as a barbecue man into a business. Today, advancing age keeps Herb from tending to the place daily as he once did, but his family proudly continues what he started.

Years ago, when Herb wanted to build the pit, he turned to his son Dave, who salvaged brick from an old mine building.

“I never had laid brick,” Dave says as he checks the progress of the evening’s ribs. “I priced bricklayers and then decided to do it myself. Built the whole pit.”

Hickory and charcoal provide the fuel for the barbecue at Herb’s — never a canister of gas nor a volt of electricity.

“It’s charcoal for heat, hickory for flavor,” Dave says. He started tending the pit right after he finished building it.

“An open pit is very unforgiving,” he says. “Too hot, and you burn the meat. Not hot enough, it won’t even cook.”

Vaughn Gibson, Herb’s other son, says the ribs that come off that fire are finished with a broiler sauce, which is the restaurant’s sweet-and-sour barbecue sauce thickened down to form a glaze on the meat. They don’t use a rib rub.

Herb; his wife, Helen; and their two sons understand the nuances of regional barbecue. They carefully walk the lines of demarcation in the barbecue world.

“In Georgia, people like a ‘tomatoey,’ sweet sauce,” Vaughn says. “Here in North Carolina, the preference is vinegary and a little sweet. Our sauce is sweet and sour.”

Listed at the top of the menu at Herb’s is the BBQ Feast: ribs, a quarter of a chicken, sliced barbecue, barbecued Polish kielbasa, baked beans, slaw, potato salad, and rolls or hush puppies. Below it is the BBQ Sampler, which includes, as the menu states, “all of the above, but a little less so we don’t have to wheel you out.”

Most every element at Herb’s is tied to family tradition. Although you don’t see them at all barbecue restaurants in the state, onion rings are a favorite here.

“When my boys were growing up, we had kids at our house all the time,” Helen says. “They could eat those onion rings faster than I could make them.”

Another dish from Helen’s kitchen is also a menu mainstay. Call it chocolate pie, and Helen points out that it isn’t served in wedges and doesn’t have a meringue topping. Helen’s take on chocolate pie involves a cookie-like crust, a cream-cheese layer, a chocolate layer, and whipped cream on top, all striped with chocolate. She calls it a four-layer chocolate pie.

In its 30 years, the restaurant has seen many changes throughout the region. Herb’s former livelihood, copper mining, is gone. Several local plants, such as Levi Strauss & Co., have moved operations. But Herb’s Pit Bar-B-Que has survived.

In addition to pulling a strong, local clientele from three states, Herb’s relies on tourism to keep the business going. Flowing rivers and falling leaves make April to early November the peak season for travelers venturing to this part of North Carolina. The restaurant is only a short distance from the Ocoee River, one of the nation’s most popular destinations for white-water rafting. The area gained worldwide exposure in 1996 after the Olympic slalom canoe and kayak events took place here.

As the economy evolves, so does Herb’s. Rib-eye steaks, prime rib, shrimp, catfish, and mountain trout now appear on the weekend menu to accommodate customers’ changing tastes. But barbecue is still the staple.

“We have held on to what made us,” Vaughn says. “We still cook barbecue over an open fire with a firebox, even though it’s smoky, nasty, hard work.

“We enjoy people talking about our food, saying we’ve done a good job. From our dad, we learned that you should try to do a good job at everything you do. He always said that kids shouldn’t have idle time on their hands.”

A black-and-white photograph of Herb, taken by an employee, overlooks the gift shop and reception area that Dave built.

Dave says the photographer captured his father’s personality well. In the picture, Herb holds a pair of tongs. The tool symbolizes the “tending to,” or the attention, care, and never-ending manual labor that the Gibson family devotes to every customer, no matter which state line he or she crosses to get here.