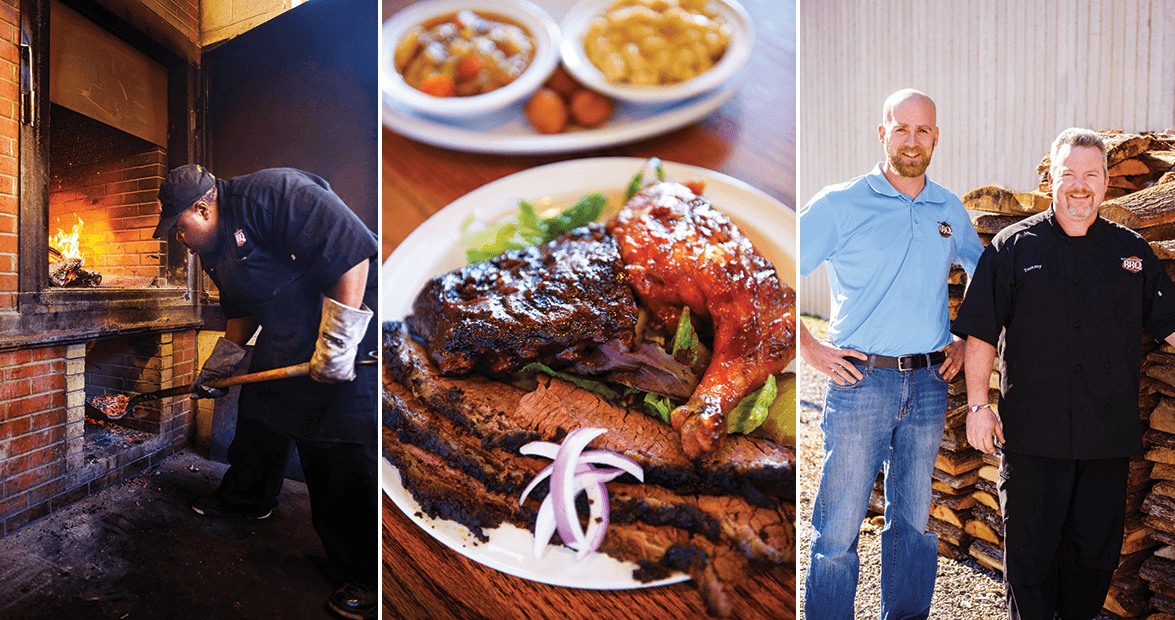 The preferred entrance for Hillsborough BBQ Company should be the back door. If you came in the back, you’d miss the hand-laid stonework out front on Nash Street and the stained-glass pig in the window. You wouldn’t meet the smiling hostess standing behind a wooden barrel that serves as her stand. Or the bartender grabbing handles labeled with local breweries. Or the black-and-white photos covering the walls with scenes of a 1940s pig pickin’.

No, you’d miss all that. Instead, you’d pass stacks of oak and hickory slabs in a gravel driveway and open a screen door to a room the size of a walk-in closet. In here, sweaty men open heavy, metal doors and shove wood into a custom-built pit. They light the fire and let the smoke rise up and the coals break down. They shovel the coals to the redbrick box to the left containing a grill grate crowded with meat — pork butts and rib racks and chicken breasts. The hot embers cook the meat through, low and slow.

We spent a day with the guys at Hillsborough BBQ Company. See what makes their barbecue so good in this exclusive Our State video.

It’s hot and dirty back here. Your clothes would stink for days. But if you’d walk through the back door at Hillsborough BBQ Company at about 10:30 a.m., Tuesday through Sunday, you might just sneak a piece of chicken as it comes off the grill. And all those fancy things up front wouldn’t matter. They’re nice and all. But in North Carolina, a state where people hold their barbecue recipes almost as close as their Bibles, smoke means flavor. And that’s what you’d get back here: a nose full of smoke.

It’s a chilly Wednesday morning around 9 o’clock. Behind Hillsborough BBQ Company, Tommy Stann steps up into his ’93 model, white F-350 and sits down on ripped fabric. Joel Bohlin hops in the passenger seat.

Stann and Bohlin, the owners of Hillsborough BBQ Company, head down Dimmocks Mill Road to Johnny Cates’s sawmill in the neighboring community of Efland. They make the trip once a week.

“The first few months, the barbecue was average at best because we were using so much sweet gum wood,” Stann says. Now the two weed through the slab pile, selecting only hickory and oak.

Stann identifies white oak by the square points on its bark and hickory by its “little chicken feet.” Before he opened the restaurant two years ago, Stann owned a landscaping business.

“I lost my passion for landscaping, and barbecue kind of picked my passion back up,” Stann says.

He took an interest in barbecue when he saw some cookers in a customer’s yard. The customer invited him to a cookout on Saturday. The following Monday, Stann bought a $500 cooker.

He spent some time working at the neighborhood bar, the Wooden Nickel, to gain some kitchen experience. And within about two years, he partnered with the bar’s owner to open a barbecue restaurant.

When it was time to build the pit, Stann visited Wayne Monk at Lexington Barbecue. Stann asked to take pictures and measurements of the pit, and Monk willingly opened the back door.

“You could put a restaurant in my parking lot,” Monk said, “and it wouldn’t affect my business.”

In a typical restaurant, the owners have two things to manage: the dining room and the kitchen. But at Hillsborough BBQ, there’s also the pit. Those three aspects became too much for two people, so Stann and his business partner at the time found Joel Bohlin.

Bohlin is a food purist. He refuses to own a microwave. Every entree and side dish on his menu is homemade.

When Bohlin’s in the restaurant, he can’t sit still. If tickets back up in the prep window, Bohlin takes a place on the line. He drops hush puppies in the grease and delivers them. He puts a keg of beer on tap. He wipes down a table.

A prep guy once quit because the work was too hard, Bohlin says. He told Bohlin that at his old job, he just opened cans and dumped them in. That’s not how it works here.

An old saying goes: City people come to the front door, but country people know to go to the back. Maybe it’s because country people are less formal. Or maybe city people are more polite. Or maybe, somewhere down the line, country people started going around back because there was often something good to be found back there — a pie cooling in the window or some tomatoes ripening in the sun or a pig cooking over the pit. And they knew if they walked to the back door, whoever those things belonged to would likely offer them a slice or a few or a piece.

At Hillsborough BBQ Company, you want to follow the smoke and come to the back door. But you’re polite and come to the front. You notice Stann’s stonework and speak to the hostess and order a drink and admire the photos and watch Bohlin through the prep window. Then you take a bite. And you get a mouthful of flavor. And without ever seeing the pit, you know exactly what’s going on back there in that room full of smoke.