The group of crafters inside Rufty’s Chrismon Shop in Salisbury has made the long journey from a church in Texas to create beautiful beaded ornaments that reflect light — and the true meaning of Christmas.

They’ve wandered slowly through the five ornament rooms displaying hundreds of iridescent crosses, angels, and other representations of Jesus Christ and stories from the Bible, including a tightly woven 3D replica of a tiny Jonah inside the whale’s mouth. Now, it’s time for shop owner Melonie Rufty Beaver to teach them how to make her signature Christian Symbols ornaments.

Beaver is the third of four generations of the Rufty family to continue a Christmas ornament ministry started 60 years ago by Frances Kipps Spencer of Virginia. Spencer’s ornaments, made of Styrofoam, craft beads, and other decorative items, were called Chrismons, a combination of the words “Christ” and “monograms.”

Beaver’s parents, Harold and Barbara Rufty, were Spencer’s chief suppliers of the materials used to make Chrismons. With her permission, the Ruftys adopted the trademarked Chrismon name for their business and began selling Spencer’s patterns. When Spencer passed away in 1989, Beaver decided to use her own weaving and art training to design a new line of ornaments called Christian Symbols.

“People respond to these ornaments in amazing ways,” Beaver says. “Many are not familiar with our Christian Symbols, nor the original Chrismons, so when they see them for the first time, especially on a large church Christmas tree, it’s breathtaking.”

Today, as the crafters from Texas prepare to make their own ornaments, one of them surveys the materials before her — 132 gold, pearl, and crystal beads in varying sizes and shapes, and a three-yard strand of gold wire. She picks up the wire, and her eyes dance quizzically between it, the beads, and a dazzling 3D crown displayed nearby. “We’re going to string the beads on this wire, and it will become that ornament,” she says to Beaver. “Is that right?”

Beaver’s response is designed to boost confidence in her students: “You will fold your wire in half and learn just two techniques needed to create this design,” she says. “I promise that you will take home a beautiful ornament, your own version of this one.” 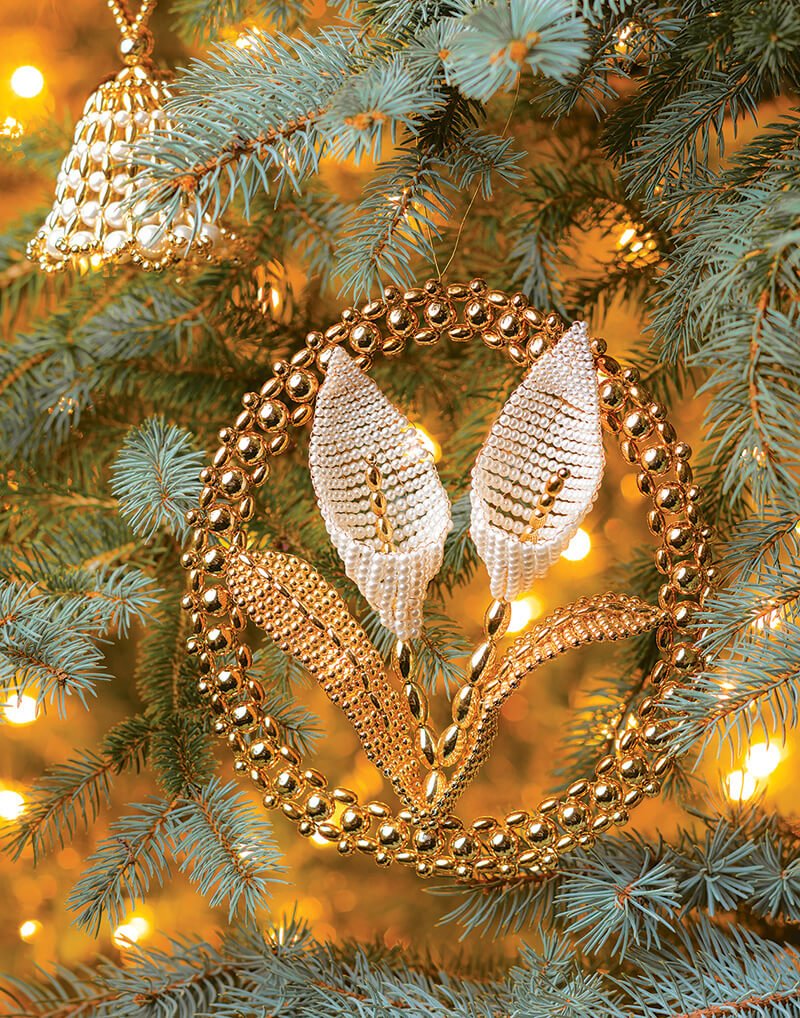 The Flowers of Faith Calla Lily is an advanced Christian Symbols pattern. These ornaments are intended to be made during Bible study. photograph by Jerry Wolford & Scott Muthersbaugh

Crafters from all over the South come to Rufty’s, which has operated out of an understated red brick building overlooking Interstate 85 since 1990. Beaver teaches four levels of classes from February through September. Year-round, she sells Christian Symbol kits for the hundreds of ornaments that she has designed, many of which come in small patterns, perfect for home Christmas trees or gifts, and large ones, which are stunning on tall trees in churches.

Beaver maintains the original Chrismon traditions with her own line of ornaments, sharing two important tenets with customers: First, ornaments should be made during Christian fellowship or Bible study so that crafters can learn the symbols’ biblical significance and grow in their faith. Second, completed ornaments should never be sold, only donated to a church or presented as gifts to symbolize God’s love. “Used in that way,” Beaver says, “these ornaments remain a true representation of Christ.”