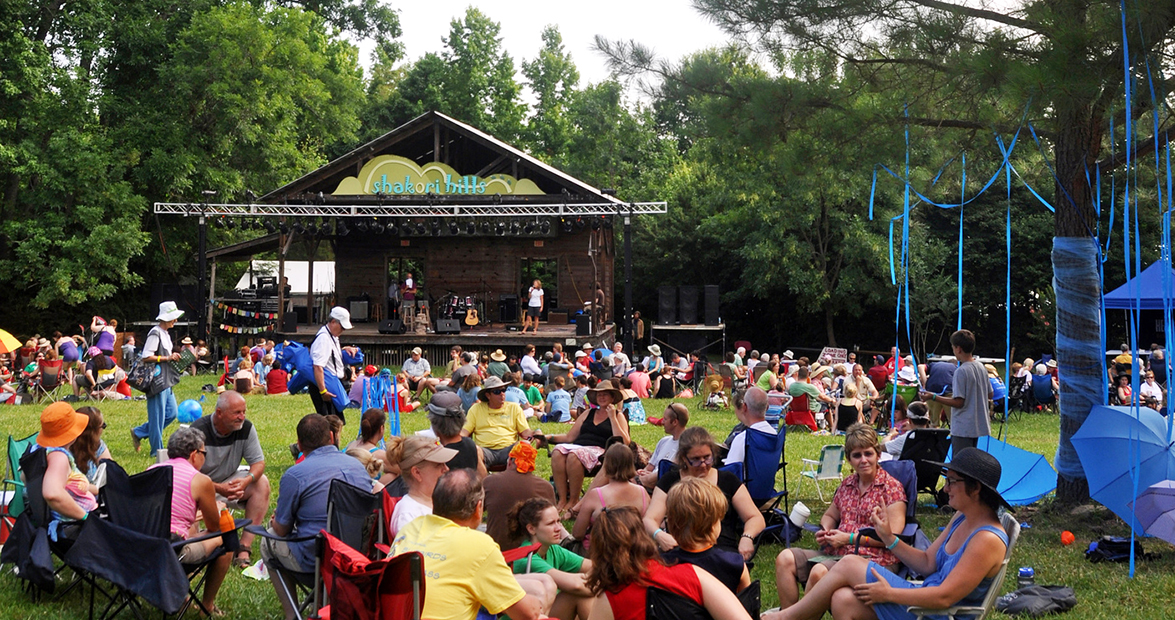 North Carolina is host to some of the best music festivals in the country. We compiled this year’s fall lineup, and we will continue to update this list as more festivals are scheduled, or become known to us. This version was updated on August 29, 2017.

Don’t see your favorite music festival on our roundup? Submit an event below.

Smoky Mountain Folk Festival • Lake Junaluska • September 1-2
Audience members take their seats in Stuart Auditorium as the windows frame the sunset over Lake Junaluska, and a parade of traditional and contemporary instruments take the stage. Dulcimers and harmonicas make an appearance, and even household items, such as spoons and saws, find a new life in folk music. The lineup is a pleasing variety of acoustic duos, energetic dance groups, and quick-pickin’ ensembles.

Happy Valley Fiddlers Convention • Lenoir • September 1-3
“Fiddler’s Convention” is perhaps a misnomer for this festival. While there will be some fantastic fiddling, the convention showcases a diverse group of talented musicians from the region. The convention will also hold a variety of contests, jam sessions, and educational demonstrations, including one where attendees can watch a luthier make instruments.

The John Coltrane International Jazz & Blues Festival • High Point • September 2-3
The Piedmont area is proud to claim jazz artist John Coltrane as one of their own and continues to find ways to keep his music alive even 50 years after his death. The Friends of John Coltrane Organization founded this festival six years ago to bring live jazz to middle and high school students from Alamance, Guilford and Forysth Counties, and they are encouraged to apply to the festival’s Student Musician Essay Competition for a chance to win a new instrument.

15th Annual New River Blues Festival • Grassy Creek • September 3
Enjoying nature is a free activity, and so is attending this blues festival on the New River. There’s no room for Fido or other pets here, but families, chairs, blankets, and umbrellas are welcome. Food and beverages, both alcoholic and nonalcoholic, are available for purchase. Gates open at noon.

Blue Bear Music Fest • Boone • September 7-9
Three days, three stages, and 150+ acres to dance, camp, eat, shop and listen to some great live music — this is Blue Bear Music Fest. Now in its fourth year, the festival even offers tethered balloon rides on site for those looking to up the ante.

Hopscotch Music Festival • Raleigh • September 7-10
Now in its eighth year, Hopscotch features local, national, and international bands in a variety of genres, from folk and rock to hip-hop and pop. More than 130 bands play in venues across the city — indoor and outdoor — all within walking distance of each other. The 2017 lineup includes a number of larger, well-known acts, but 20% of its lineup is comprised of local bands from all over North Carolina. Learn more about this year’s local artists here.

77th National Folk Festival • Greensboro • September 8-10
Greensboro is going big as it plays host to the National Folk Festival for the third time. Approximately 300 artists will perform, including headliners like Haywood County’s Balsam Range. While music will be in abundance, the festival’s mission is to celebrate all types of folk art, both from North Carolina and from cultures around the world. The NC Folklife Area will celebrate performance traditions and pottery, some of our state’s most recognizable folk art forms.

Mountain Song Festival • Brevard • September 8-10
Rain or shine, the show goes on at Mountain Song Festival where attendees can stay dry under the open-air (but covered) general admission seating area. Catch multiple sets from your favorite bands at the event and hang around to catch the late night performances that begin off-site at 10 p.m.

Pickin’ by the Lake • Roxboro • September 9
This fifth annual bluegrass festival is organized by Piedmont Community College’s Alumni Partnership to help raise scholarships for the school. Enjoy music from five different bands as you relax with a great view of the lake.

Stokes Stomp • Danbury • September 9-10
The abundance of activities at Stokes Stomp is one of the many reasons why the festival has continued to grow in popularity and is celebrating its 43rd year in 2017. Watch musicians and dancers grace the main stage or enjoy the duck race, dunking booth, river activities, children’s area, or arts and craft demonstrations through the weekend. The event is free, and includes free parking.

4th Annual Blowing Rock Music Festival • Blowing Rock • September 16
Soak in the views from this famous tourist attraction, then explore one of the two festival stages for a healthy dose of folk, jazz, blues, and rock music. Tickets are $30 until September 10, and are $45 onward. Gates open at 10 a.m.

Creedmoor Music Festival • Creedmoor • September 16
When the third Saturday in September arrives every year, Main Street shuts down and the volume turns up for the Creedmoor Music Festival. More than 100 food and craft vendors welcome the festival’s 6,000-8,000 visitors and with several free children’s activities, attendees of all ages are guaranteed to have a great day. Festivities start at 8:30 a.m.

43rd Annual CenterFest Arts Festival • Durham • September 16-17
CenterFest celebrates fine artists of all kinds, including musicians, performers, and visual artists whose media range from paintings and sculpture to woodworking and jewelry. There will be more than 70 performing acts across six stages in Durham, and more than 140 visual artists showcasing and selling their work. This family-friendly festival will also feature a Creative Kids Zone filled with fun activities, and local food and beverage vendors.

Brewgrass Festival • Asheville • September 16
Western North Carolina’s original craft beer festival is celebrating its 21st anniversary this year at Memorial Stadium in Asheville. While more than 55 breweries will offer a diverse assortment of national and regional craft beer, Brewgrass Festival is steeped in the celebration of bluegrass music in the Appalachian mountain region. This year’s music lineup is The Midatlantic, the Wooks, and Fireside Collective.

Apex Music Festival • Apex • September 16
Formerly the Apex Jazz Festival, the Apex Music Festival is in its seventh year and will feature live performances in 10 public venues across Apex. The purchase of a wristband will grant you access to all 10 venues, the beer and wine garden, and the main stage. This year’s lineup includes a variety of artists from across the country.

Carolina in the Fall • Wilkesboro • September 22-23
Now in its third year, the Carolina in the Fall music and food festival continues its tradition of celebrating the heritage of western North Carolina through music, food, and beverage. More than 100 musicians, chefs, vintners, and craft beer brewers from the region will gather on Main Street in Wilkesboro to engage audiences with the best of their craft. This year will also feature the first annual 5K & 10K Chad Lovette Memorial Trail Run. The festivities are hosted by The Kruger Brothers.

Deep Water Soul Fest • Hot Springs • September 22-24
Two nights of festival camping are included in the price of every ticket, so attendees can stay on the festival grounds for the most immersive experience at Deep Water Soul Fest. The festival is in its inaugural year and advertises itself as an event for the entire family along the banks of the French Broad River.

Live & Local: Roots Fest • Raleigh • September 23
The second event in Raleigh’s Live & Local series, Roots Fest brings festival-goers together for live music, games, and art. The festival will run from 12 to 9 p.m., and is a great way to get out of the house for a few hours and appreciate the community.

Carrboro Music Festival • Carrboro • September 23-24
The Triangle area is home to a lot of talent, and Carrboro is dedicating two days to showcasing it. The festival, now in its 20th year, welcomed nearly 200 acts across 25 stages in 2016.

3B Music Festival • Union Grove • September 23
Blues, bluegrass, and barbecue — what more could you ask for? Maybe beer, but you’ll have to leave it at home for this family-friendly, alcohol-free festival. Still, there are plenty of activities like corn hole, hayrides, vendors ,and several genres of music to enjoy throughout the day.

Wide Open Bluegrass • Raleigh • September 29-30
Part of IBMA’s World of Bluegrass, this free street festival in downtown Raleigh features five stages, a dance tent, and a music expo in the Raleigh Convention Center. On Friday and Saturday there will be ticketed main stage events at the Red Hat Amphitheater, and the North Carolina Whole Hog Barbecue Championship will be back again this year to add a distinct local flavor to the festivities. While you’re at the festival, be sure to check out the juried artists in Artsplosure’s Arts Market area, the Got to Be NC products, and much more.

White Oak Shores Bluegrass Festival • Stella • September 29-30
Music lovers in RVs and tents alike are welcome to set up camp and stay awhile for this annual, two-day music festival at the White Oak Shores Camping & RV Resort on North Carolina’s pristine Crystal Coast. The festival features 20 musical acts throughout the weekend, and food and beverages are available for purchase.

AVL Barnaroo • Leicester • September 29-October 1
Not to be confused with Tennessee’s Bonnaroo, this Asheville area festival began in 2009. Since its inception, Barnaroo’s lineup continues to evolve, branching beyond rock ’n’ roll to incorporate other musical styles. The event was founded with family in mind, so bring the kids. Music goes from morning to night, and afterward, participants can sleep beneath the stars on an organic farm.

Beach Music Festival • Emerald Isle • September 30
After a long hiatus, the Beach Music Festival returned to Emerald Isle last year and was attended by visitors from across the state looking to combine their love for music, food and the beach at one event. This year will be no different — festivities are from 11 a.m. to 6 p.m., admission is free, and all are welcome. A number of food trucks will be on-site, but wine and beer are strictly BYOB.

Bascom Lamar Lunsford Festival • Manteo • October 6-7
Western North Carolina’s second oldest festival is celebrating 50 years this year and it is sure to be a day to remember. Enjoy regional music, dance, and crafts with performances on the daytime stage and an evening concert at 7 p.m. in the auditorium.

Fall Shakori Hills GrassRoots Festival • Pittsboro • October 5-8
Imagine a camping trip with loved ones in beautiful Chatham County, then add live music, great food, and lots of fun — that is Shakori Hills GrassRoots Festival in a nutshell. A family-friendly celebration of music, dance, art, and education, this fall festival is a music lover’s paradise. Come for a day or two, or set up camp for the weekend and enjoy more than 60 bands across four days and four stages.

Ol’ Front Porch Music Festival • Oriental • October 6-7
A love for music isn’t born in the recording studio; for many artists, memories of sitting on the front porch with friends and family playing music is where the nostalgia kicks in. Ol’ Front Porch brings attendees and musicians alike back to a simpler time without the big stages, light shows, or hectic crowds — just good folks and bluegrass music.

LEAF Festival (Fall) • Black Mountain • October 19-22
For more than 20 years, the LEAF Festival has been bringing together thousands of people from all walks of life to experience the power of music, art, and culture. This four-day festival takes place on the site of the historic Black Mountain College and is surrounded by rolling hills, lakes, streams, and gorgeous mountain views. The campgrounds are comfortable and family-friendly, and there are plenty of live performances and activities for everyone to enjoy.