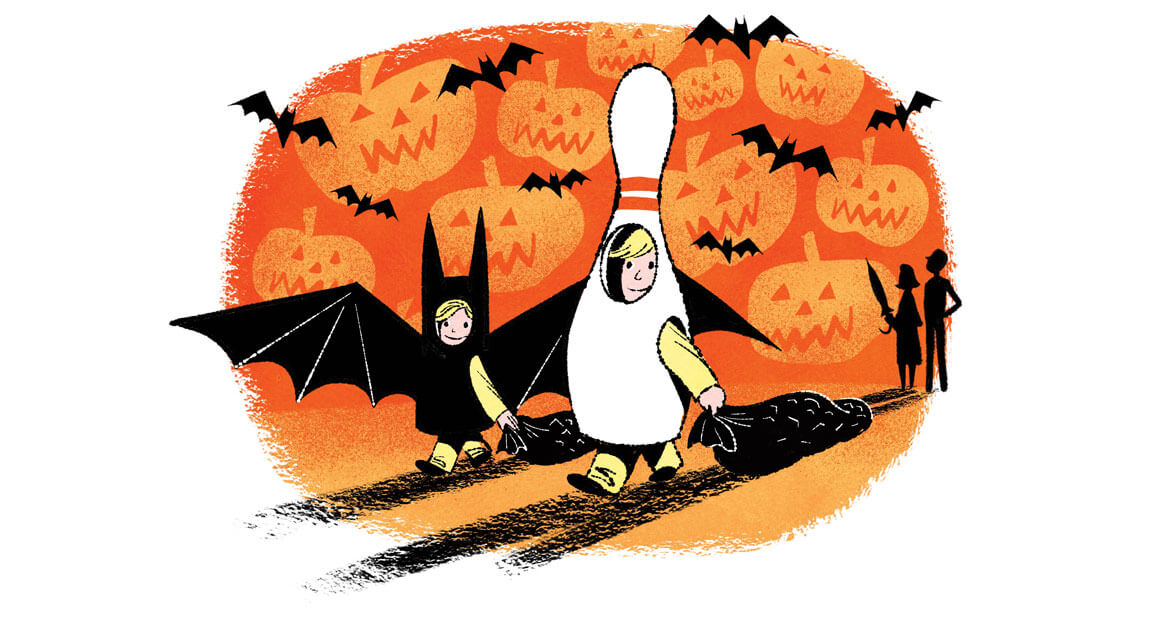 Halloween in North Carolina presents a curious weather + costume equation: It can run very close to freezing in late October, but it can also be 75 degrees. This isn’t much of a problem if you’re a grown-up. Grown-ups are largely adaptable, able to swing from scarecrow to summertime farmhand, from baseball player to basketball. We also have seersucker suits we’ve not worn since our weddings, and can, with perhaps a single large flower, come up with a fairly convincing something costume: Clown? Silent-movie pratfall-er?

This is all a bit more of an issue if, however, you are 5 years old and wish to dress as your own stuffed blue bear — a desire from which you will not be moved, no matter the weather.

We got lucky. A front came through that year, knocked the temperatures down 20 degrees, and The Toad, dressed head to toe in blue fur, did not roast.

The Wee, originally nicknamed The Wolf — which his older brother misheard as “welf” — went his first year as a welf in sheep’s clothing (homemade, cotton balls and glue). He’s also been a lion (secondhand store), a snake (online retailer), Darth Vader (hand-me-downs and a bolt of cloth), and a ninja (pop-up store, last-minute). His brother’s costumes, variously sourced: a pumpkin, a biker, a frog, his own blue bear, a kitty, a baby jaguar, and a biker again.

But those were not the triumphs. The triumphs are these: When he was 7, The Toad went as a goth poet from his then-favorite animated TV show. His favorite character, one of a dozen sisters, wanders the show saying “sigh” and reading dark, dark poems through thick black bangs. This was his idea entirely: He delivered his plan, unblinking and serious, in the kitchen. Yes, we said, trying to contain our — astonishment? We thought he feared girls. And poetry. We found a dress and a wig. He wore them proudly, and well. He wandered the neighborhood, sighing.

And the year he was 4, he wanted to be a purple seaplane. We built the costume together out of PVC pipe and cardboard. His feet were the pontoons. He looked incredible. The costume outweighed him; the wings made it almost impossible to fit through the preschool doors. He figured it out, though, and we went that year, as all other years, “door-dee-door,” which is what both kids still think “door-to-door” is. The person who corrects them, friends, will get, from me, trick rather than treat.

In my increasingly scattershot memory, all of their Halloweens have been crisp — or crisp enough, that first scent of true fall in the air, the leaves in our part of the Piedmont starting to turn in earnest. We might leave a pot of soup warming on the stove, and my wife and I will eat that upon returning, as the boys go head-and-shoulders deep in their pillowcases, counting and cataloging their haul. Our neighborhood is sidewalked and lamplit, and there are just enough folks gone overboard with smoke machines and spooky music to strike the precise right note: safe and scary all at once. It’s a great holiday, Halloween. Low-stakes, no presents, the children going to sleep not with visions of sugarplums dancing in their heads, but just sugar, unadorned and unfreighted.

We’re still firming up what they want to be this year. The Toad thinks maybe a bowling pin. The Wee wants to be a bat, “but who can really fly.” They’ll change their minds six more times, and the forecast will wobble back and forth, and we’ll hope for the best, like we always do — that the duct tape will hold, that the rain will hold off, that the next block will deliver that one house handing out full-size candy bars. Trick or treat, they’ll yell at each door, and my wife and I will hang back in the street, knowing that this isn’t our last one of these, but also that it can’t go on forever.

See them? Here they come through the dusk, the bat and the bowling pin. Can we keep going? they’ll ask. Oh yes, we’ll say. Certainly, yes. We’ll go absolutely as long as you like.