At 4 in the morning, the phone rings. Unlike many people who get calls at that hour, Micah Daniels, co-owner of Fresh Catch Seafood in Wanchese, isn’t fazed. She gets these early morning calls all the time. It means that one of her boats has come in with a full catch. This morning, it’s shrimp, and the challenge begins to get them headed, iced, and on their way to buyers as quickly as possible.

Challenge is an apt word when it comes to the commercial fishing industry in Wanchese these days. And Micah says with a laugh that perhaps her biggest challenge is being the lone woman in an industry that has historically been dominated by men: “I’m the only girl-run fish house in Wanchese, and that’s not always made for easy going!”

Still, easy certainly doesn’t describe the lives of the fishermen and fish house workers who have supplied major markets with fresh seafood for the past 100-plus years. The history of this local industry is full of interesting twists and turns.

This is a fish story, but unlike most such tales, it doesn’t involve exaggeration or lofty fibs about the one that got away. This is a true story set in the small fishing village of Wanchese, located on the southern tip of Roanoke Island. And while there have been plenty of notable contributors over the past century, two local families, the Etheridges and the Danielses, have spent generations supplying a large portion of the East Coast’s seafood needs. Today, that supply trail goes well beyond the coast.

Willie Etheridge Sr. opened Wanchese Fish Company in 1936, when he was 38 years old. By then, he was married to Mamie Perry, and they had two children: Willie Jr., who was 15, and Maude, who was 13.

Willie Jr. helped his father at the fish company before and after school, but anytime he wasn’t otherwise occupied, he was fishing. After he graduated from high school, he enlisted in the U.S. Coast Guard in 1939 to fight in World War II. When he returned home after the war, his father offered him the management of Wanchese Fish Company, but Junior turned it down. He loved being on the water and making the catches, and he preferred that life to one that kept him at a desk.

The Etheridges — (from left) Willie III, IV, and V — continue the business started by Willie Jr. in the 1970s. photograph by Chris Hannant

Willie Jr. married Betty McDonnell, and they had four children of their own: Bonnie, Irene, Susan, and Willie III. They also raised Betty’s sister’s children, Frank and Mark Vrablic. Meanwhile, Maude married a local boy named Malcolm Daniels, a member of the other Wanchese fishing family that would build an empire. They had their first son in 1942, and 14 more children followed: 10 sons and four daughters. Almost all of them went on to have ties to commercial fishing.

When Willie Jr. turned down his father’s offer to run the company, Willie Sr. offered it to his son-in-law, Malcolm Daniels, in 1946. For the next couple of decades, Malcolm took on the responsibility of, among other things, setting the price that fishermen received for their catches.

At the same time, Willie Jr. was becoming widely known and respected as one of the best and most prolific fishermen in the region.

Mark Vrablic describes a dip in fishing in the 1960s. “Most of the ’60s were not that good for fishing,” he says. “This was before all the regulations we have to live with today that are supposed to protect different species, and eventually the catches came back strong. In fact, during that time when we weren’t catching the fish we normally did, the swordfish were everywhere. From about ’64 to maybe ’71, we were the biggest swordfish port in the country.”

According to Daniels family lore, it was haggling over the price of swordfish that created discord between Willie Jr. and Malcolm. In the early 1970s, Willie Jr. began his own enterprise, Willie R. Etheridge Seafood Co., in the original building where Wanchese Fish Company had been.

Now, the company started by Willie Etheridge Sr. was being run by a Daniels and faced competition from his own son.

The catches in the ’70s and ’80s were more than abundant, and both fish houses worked to capacity for decades. As the industry boomed, other fish houses began to pop up. Most of them are gone now. With a passion edged with frustration that is often heard from commercial fishermen, Mark, who today runs Etheridge Seafood with Willie III, explains why: regulations, importing, and the fact that Oregon Inlet, the only way for large vessels to get to the ocean on the northern Outer Banks, is all but impassable. 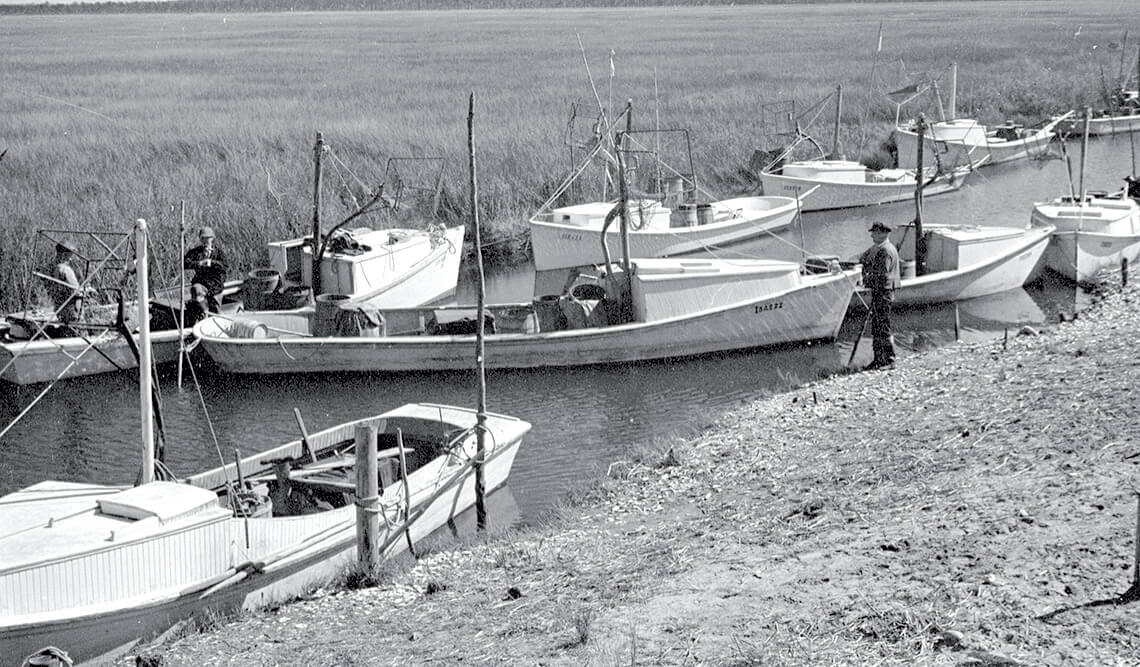 “Etheridge Seafood used to pack three to four million pounds of bluefish every year,” Mark says. “Now, with regulations, there’s an 800,000 [pound] limit. We used to catch maybe two million gray trout, and now the limit is 100,000. Our one company could probably pack everything that comes through Wanchese now. And these days, a huge percentage of the seafood Americans eat is imported. The bounty that God puts into these waters goes to very few of us in this country.”

He goes on to explain another hardship: Oregon Inlet’s depth is currently less than half of what it was in the ’70s. “That inlet is maybe six feet deep now,” he says. “Most trawlers draw about twice that, especially if they’re loaded. Captains are just not going to take the risk of running aground, so they’re taking their catches south to Morehead City or north into Virginia. We’ve probably lost about 75 percent of our sales in the past 10 years. Dare County is working on a dedicated dredge, which will solve the problem once it’s operational.” 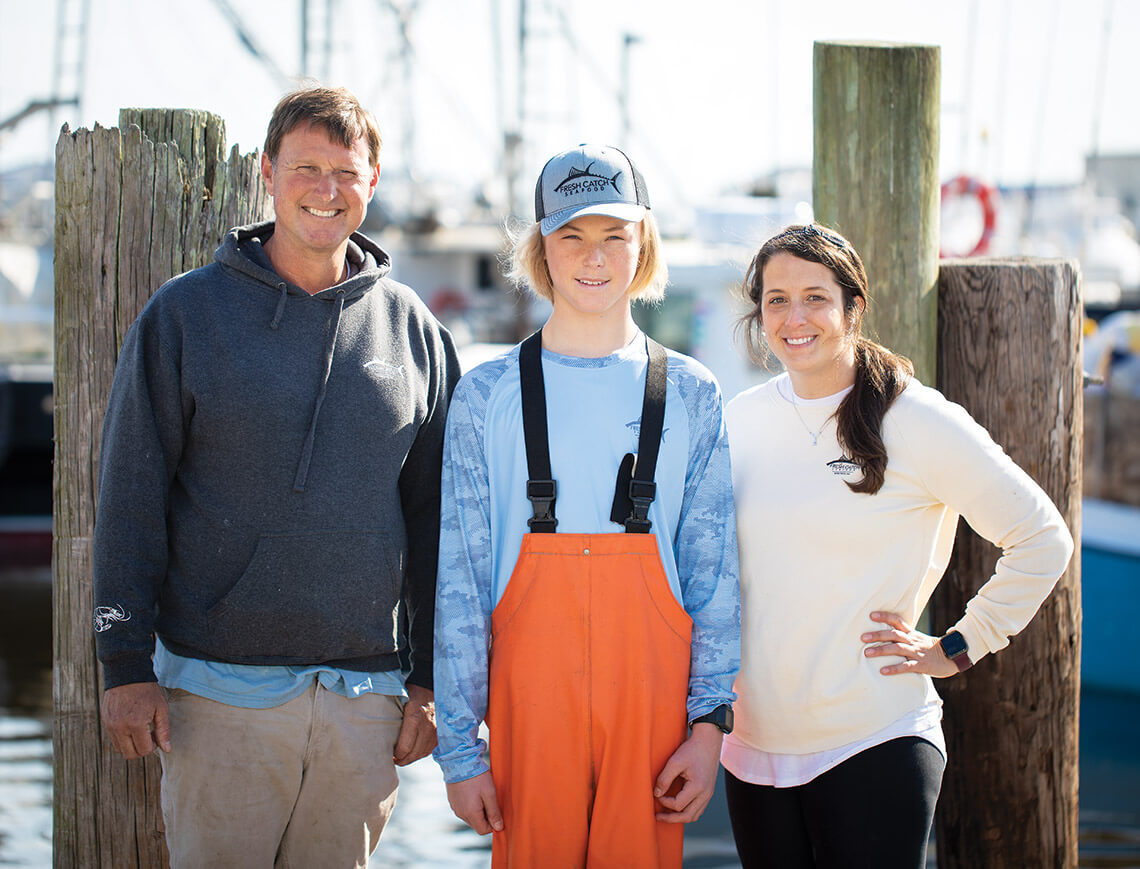 Matt Huth (left) began crabbing in Albemarle Sound when he was 14. Now, as co-owner of Fresh Catch with his wife, Micah, he fishes for tuna, swordfish, mahi, and more — often with his son, Finn. photograph by Chris Hannant

It might sound like the commercial fishing industry is nearing its end. But then you talk to Micah, a fourth-generation Daniels — daughter of Malcolm and Maude’s fifth-born child, Mikey, who ran Wanchese Seafood Company until it was sold in 2015, and who pioneered the model of having a fish market and a restaurant on-site. With ties to both families, Micah brings generations of fishing knowledge to her own fish company. She and her husband, Matt Huth, started Fresh Catch Seafood in 2016, even though some discouraged them from entering the industry. “We’ve definitely had to learn how to make changes to make it under the current circumstances of commercial fishing,” she says.

When asked if there’s a future for Wanchese and the industry, Micah gives a definitive “yes.” But, she says, fish houses have to adapt. “Commercial fishing is one of the most regulated industries in the country. The regulations can be hard to deal with, and there is increased competition with imports and global markets, which poses many challenges to a fisherman’s way of life,” she says. “But the good thing is that people who buy U.S. products know exactly what they’re getting. They can rest assured about the quality. We are the most responsibly sourced seafood in the world.”

Still, every year, Micah and others have to deal with increased regulations, more electronic monitoring, and harvest restrictions. “Adapting is easier for those of us who are younger,” she says. She points to O’Neal’s Sea Harvest as an example of a fish house that is successfully adapting. Their model was to accept whatever bucket fishermen brought in — meaning a mixed bucket of whatever fish they caught — rather than requiring a huge haul of one fish. Consistent growth followed, and they added a restaurant and a fish market. Today, O’Neal’s is the biggest fish company in Wanchese and one of the biggest in North Carolina.

For David Shields, owner and captain of the fishing boat Hardway, days start early so that fish can be ready for Fresh Catch’s customers first thing in the morning. Today’s haul: swordfish. photograph by Chris Hannant

Micah is still passionate about commercial fishing. “Having grown up with fishing in my blood, seeing what my family and the others go through to make it, I totally understand why some in this industry are so frustrated,” she says. “These guys grew businesses out of a love for the water and all the God-given fish in it. They know these waters better than anyone. They’re too smart to deplete any species.”

There might be another ingredient that Micah brings to Fresh Catch that reflects the Wanchese fishing experience through the years: faith. “Did you know that our Pentecostal church began in the fish house?” she says. “Folks would come and sit on the fish boxes to hear sermons and worship. Our commercial guys are, as a whole, pretty God-centered men. There’s a prayer many mornings that broadcasts as the boats are headed out. I always remember my family saying over the years that there’s a lot of faith in fishing, and I like the double meaning of that.”