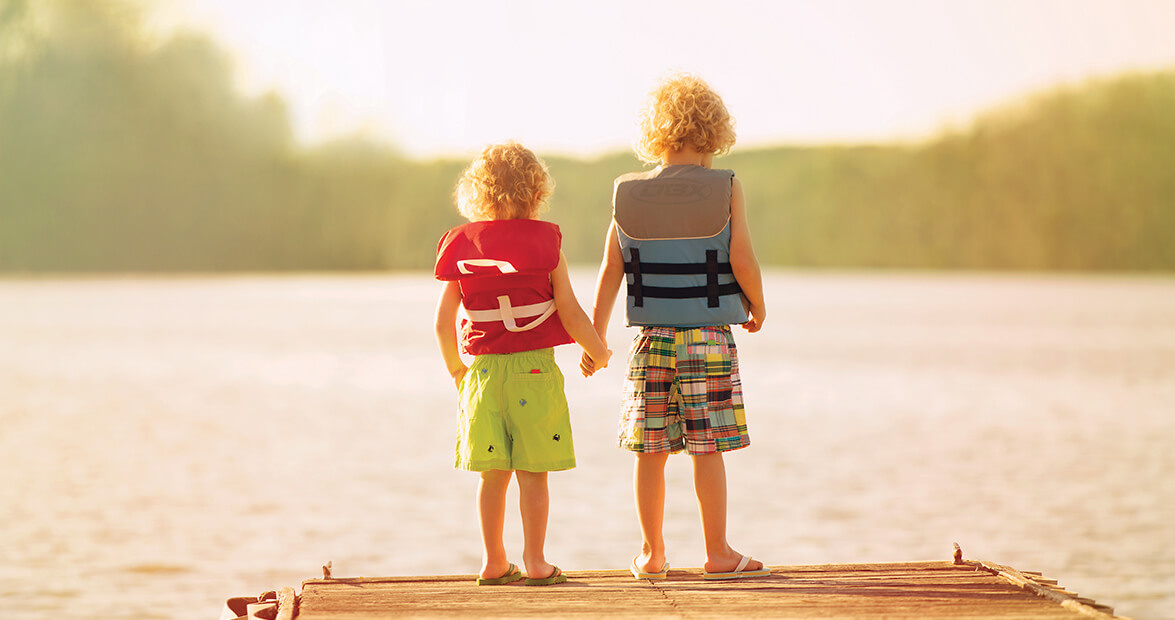 There they are, at the end of the dock: The Toad and The Wee, our sons, ages 5 and 2. Their backs are to us. They’re looking down. Moments like this can land with a kind of physical force: The boys exist. It’s not that I ever forget, but then something stills, slows, and I’m reminded. There they are.

Let’s put those boys in life jackets just slightly too large for them. Let’s stand them out on the edge of the dock. Below, already in the water: the older boys, the children of these other two couples who have let us so fully into their lives. Their boys have already learned to brave the jump. They are boys one full turn of the wheel in front of ours. They are boys whose old clothes our boys wear. Side benefit of having best friends whose children grow out of their clothes just as yours grow in: Well, that is the side benefit.

They taught us how to do this, these two couples. Let us come to their houses with our infant son, told us things would be mainly OK. Let us bring the second baby over, told us we may have thought we were tired before, but that we’d learn to survive. Our first child once fell asleep on a dog bed at a dinner party at one couple’s house. Our second concusses himself regularly in the other couple’s tree house. We all live half a block apart. Summer cookouts. Winter stews. How it goes: Feed the kids and prop them up in front of a movie, open another bottle of wine. Sit inside by the fire or outside under string lights and tell each other, in so many words, that we love each other.

One of the couples has a lake house, has invited us again and again, and again and again we’ve said no, not this year, our kids are too little, all of it code for: We can pull it together enough to see you in the neighborhood, but we’re such a traveling circus that we’ll wait till the boys are older. Except then they get older. So the next time, we say yes, what can we bring, see you tomorrow, and we pack the 400 things it takes for us to leave the house for a period longer than 30 minutes, and we go. It’s a Saturday drive through a part of North Carolina that gets not nearly enough press — neither mountains nor sea, south and west on two-lane highways toward Lake Norman, past fields and hills and forests and almost liquid sunshine and the still-new green of that hinterland between spring and summer.

The little one will cry that night from 2 to 3 a.m. The big one will steal — out and out steal — a Hot Wheels motorcycle the next day, and will have to be marched down the street to apologize when we get home. But none of that is now. Now is the dock, the boat traffic back and forth out in the channel, the cove swallowing echoes, the adults in Adirondack chairs and the big boys paddling kayaks and my boys standing, considering.

Our friends have pictures framed in their hallways: kids suspended midair, mid-flight, headed down into lake water. Holding hands, even. When I realize that that’s what I’m hoping for, I put the camera down, slip off my sandals, peel off most of my clothes, and climb down the ladder. Come on in, I tell them, and they stare down. A truth: It will be tomorrow before The Toad jumps, and The Wee won’t jump at all this year. For now, they climb down the ladder one slippery rung at a time, the prospect of that plenty daunting enough. But they do it, friends: They are baptized in the murky lake, and soon enough they’re each cutting loose from me, swimming, playing with the idea of floating, with the idea of being near me but not really needing me, not right away.

Later on, we’ll all have dinner on the huge screened-in porch, a storm off in the distance rumbling away, somebody across the lake shooting mid-grade fireworks. The adults — well, one of us will catch another’s eye while the kids are eating, while there’s a moment of quiet brought on by hot dogs and the kind of tired only swimming brings, and it’s not hard to imagine what won’t get said, but what gets said just as surely, all the same: Thanks for the life jackets. For this cold beer. For your children, patient with mine. For the wild miracle of living just down the street. For inviting us to this plain, perfect house. To this place. We’re so tired. We’re so lucky. Let’s do it all over again in the morning.