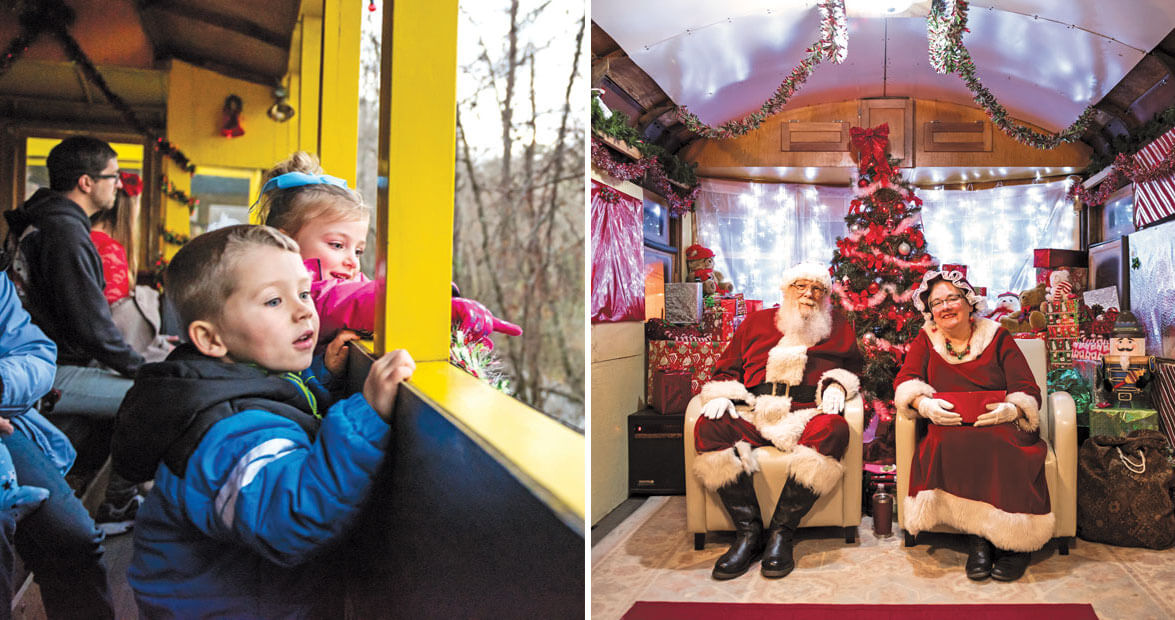 ’all ready to see Santa Claus?” Conductor Braiden Burgess shouts over the shriek of metal wheels on a metal track. In response, two trolley cars full of passengers — young and old, locals and visitors — enthusiastically shake the jingle bells they were given when they boarded at the little station in Woodfin, just north of Asheville.

Every year, some 3,000 passengers ride the Jingle Bell Trolley in November and December, taking a 24-minute trip along one of the last vestiges of Asheville’s once great, but now mostly defunct, network of rail lines. In many ways, railroads made Asheville the city it is today, easing trade and travel through the Appalachians and bringing the first tourism boom to the region in the late 19th century. Trolleys arrived soon thereafter, whisking passengers from Pack Square in downtown Asheville to outlying communities like Woodfin.

“The trolley went 20 miles an hour. If you were used to horses and dirt roads, that would have felt like riding in an airplane,” says Rocky Hollifield, the founder of the all-volunteer Craggy Mountain Line. To call Hollifield a train buff would be an understatement: He’s been crazy about railroads since he was a boy, growing up south of Asheville in Arden. “I always loved model trains, but I could never be satisfied with not having the real thing,” Hollifield says. He got his first real train car, a circa-1920 caboose, when he was 26. It’s still in his backyard.

Hollifield went on to spend nearly two decades with the Great Smoky Mountains Railroad, starting as a maintenance man and working his way up to engineer. On a Sunday stroll back in 1994, he came across the stretch of track that would become his passion: The Craggy Mountain Line is a three-and-a-half-mile remnant of the former Southern Railroad, and it had been in use since at least 1904. It was languishing when he discovered it, but through grant funding, good fortune, and, he says, prayer, Hollifield was able to acquire the line and form a nonprofit to restore it to service.

The Craggy Mountain Line winds along a curving, wooded route that, if you’re lucky enough to catch the trolley after a snowfall, seems straight out of the song that inspired Hollifield’s excursion. “Jingle bells, one-horse open sleigh — that’s what we want to share with people,” he says. “We’re using open trolley cars instead of a sleigh, but we’re taking people back to a simpler, less commercial time.”

Bing Crosby’s “White Christmas” and other classic carols play over a sound system as Burgess, the day’s conductor, shares facts about the railway. He’s one of about 30 volunteers who help Hollifield’s organization maintain the track and its growing collection of old railway cars. As his passengers leave the trolley and head to a nearby 1926 closed car to meet Santa and Mrs. Claus, Burgess reminisces about his own passion for the rails.

“I fell in love with trains when I was 3 years old, with their majesty and their beauty,” he says. “Now, when I’m conducting the Jingle Bell Trolley, I look over and I see a kid watching me, and I know I was that kid at one time. I let them ring the bell and blow the horn. It’s a dream come true — for them and for me.”