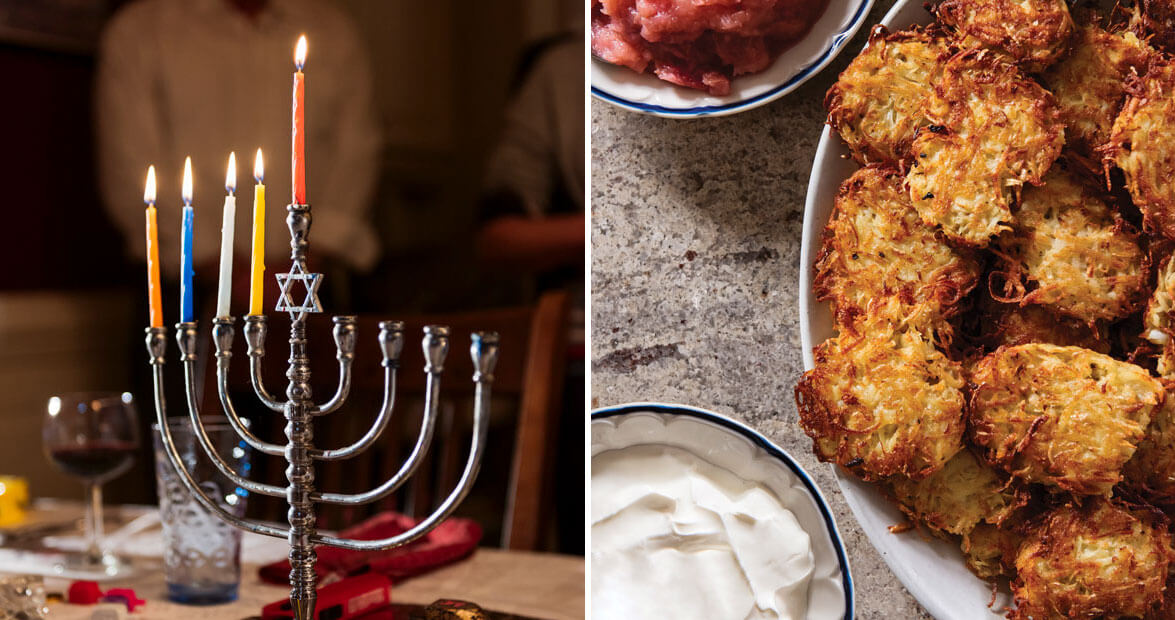 When I was a kid, and when my kids were growing up, I liked Hanukkah well enough — the colored candles were pretty, the presents were memorable, the latkes were OK — but the holiday didn’t have much spiritual juice for me. So when I arrived home from work last year for the fourth night of Hanukkah, I wasn’t especially excited. Then I saw my wife, Laurie, at the stove in her favorite apron — the Star of David-spangled, grease-splattered one she wears for only one special day of the eight-day celebration — and I knew: It’s latke night.

It’s not just the apron that gives it away; it’s how the house smells — “like a Chinese restaurant,” Laurie says. Laurie loves making latkes. Even though latkes aren’t my favorite food, and even though Hanukkah is one of the least resonant Jewish holidays of the year for me, I love coming home to latke night. Laurie spends the better part of the afternoon cleaning, grating, and draining the potatoes, and forming little discs by hand. The kitchen fills with the thick smell of potatoes frying in canola oil.

This year, our latke night was a Friday night, which meant it was also Shabbat. For decades now, we’ve had a Friday night tradition of bringing in Shabbat with the same group of friends. To help us transition from work-week mind to Shabbat spirit, before the traditional rituals — candles, blessing of the children, kiddush (sanctification of wine), and motzi (blessing of the challah) — the host poses a question for us to consider. It could be a question based on the Torah reading for the week, a life event that one of us has recently experienced, or the news of the day. Since this particular Shabbat was also the fourth night of Hanukkah, I decided to offer a question based on one of the major themes of the holiday: rededication.

Hanukkah means “dedication,” as the holiday marks the rededication of the Second Temple in Jerusalem after the Maccabees liberated it. Legend has it that when the Temple was liberated, only a single cruse of pure olive oil suitable for lighting the Temple menorah was found: enough to burn for one night. Miracle of miracles — the oil burned for eight crazy nights.

So, as the nine of us stood crowded around the festive dining room table — the menorah’s brightly colored candles ready to be lit, to be followed by the white Shabbat candles — I asked, “Have you ever had an experience of rededicating yourself to something deeply meaningful to you?” 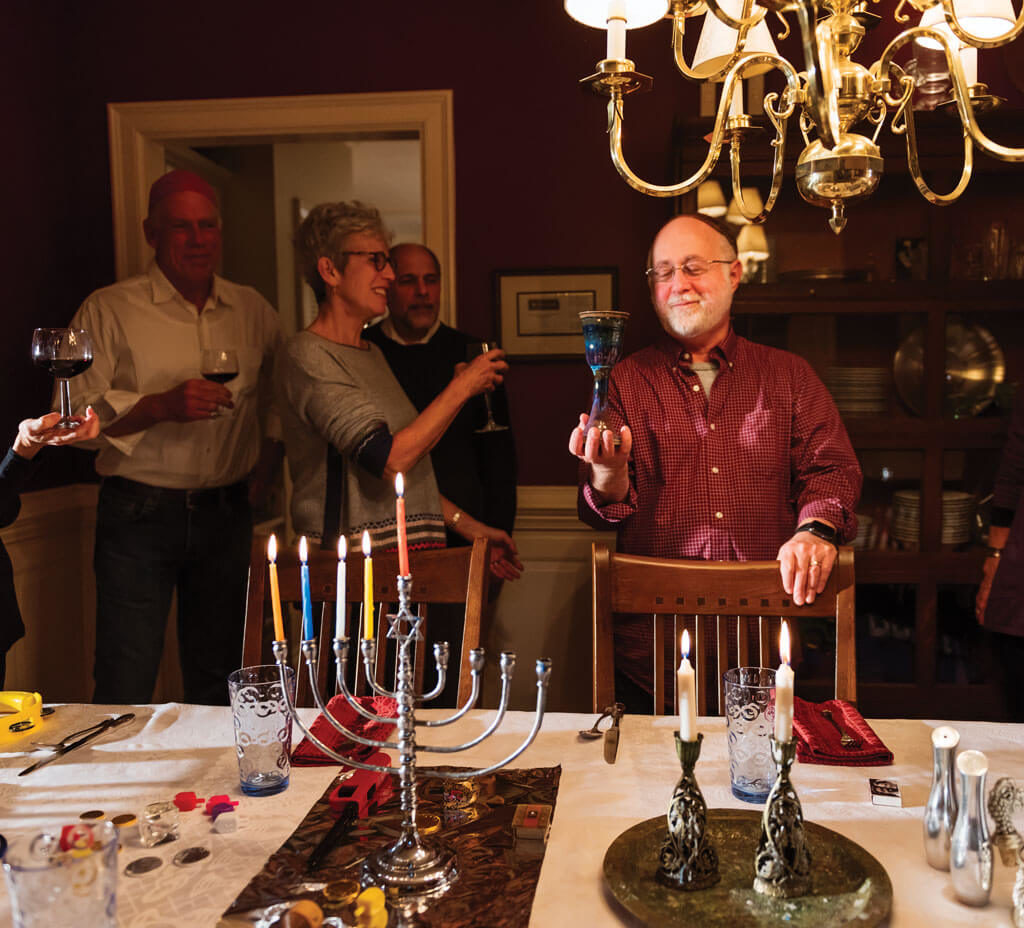 Alan, a family physician, talked about his new home workshop, a space — though not yet completed and “dedicated” — where he could connect to his late father, a Holocaust survivor who had been a builder in Detroit. Sonia, UNC Asheville’s director of sustainability, talked about winter, trees breathing in and out, and a water filter on her kitchen sink that, as it limits the flow of water into her Nalgene bottle, gives her an opportunity to slow down and collect (rededicate) herself. Deborah, the recently retired director of the university’s Center for Diversity Education, spoke of the nurturing experience of Friday night gatherings with close friends. “It’s like being with Mother,” she said, referring to her late mother.

I spoke of immersing myself in the ocean as in a mikveh, a Jewish ritual bath. A restorative act, a moment to experience the simple, profound wonder of the human body and spirit. A kind of rededication of the temple of human life. As we shared experiences around the table, preparing to light the physical candles, we glowed, the nine of us, a little more brightly. And for the first time in many years, Hanukkah was spiritually alive for me.

We blessed the candles, the wine, the bread. Laurie’s latkes topped with her homemade applesauce had never tasted better. And for dessert, Sonia made sufganiyot, Hebrew for jelly doughnuts, another symbolic Hanukkah treat. Together, we were remembering, reconnecting, rededicating ourselves to friends and family, living and dead. 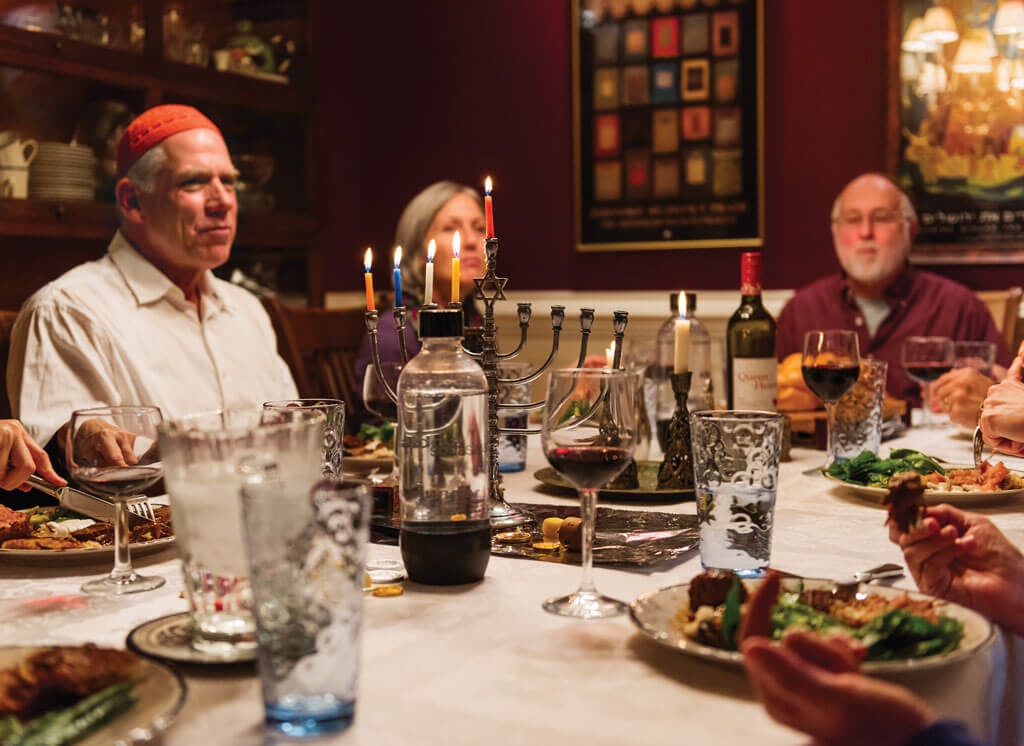 Sonia’s sufganiyot reminded me of when I lived in Israel in the late 1970s, which is when I first ate them. Those were the years when I, as a young adult, began finding a home in Jewish life, and when Jewish life began building its home in me. Until then, I had been a typical, assimilated, middle-class American Jewish boy growing up in Cherry Hill, New Jersey. My first trip back to Israel, with Laurie and our kids, was many years later. Fourteen years since that last visit, our passion for Israel seemed to have dwindled. As much as the intensity of my connection to Israel had diminished, that was nothing compared to how I felt about the Second Temple, liberated and rededicated centuries ago by the Maccabees. The Temple had become, for me, nothing more than a metaphor. Much like latkes, crisped in canola oil (not olive oil), were just a symbol, thousands of years later and, in Asheville, more than 6,000 miles from Jerusalem.

What a surprise, then, to find myself six months later on a tour bus with 40 other Ashevillians, cruising past Modi’in, the famed city where the Maccabean rebellion began. It was the last day of a 12-day summer trip to Israel. As we passed the modern — even futuristic-looking — planned city of Modi’in, I caught a glimpse of it out the bus window, and I felt it: Hanukkah in July.

The land of Israel — from the Mediterranean Sea to the Golan Heights overlooking Syria to the Negev Desert. The cities — young-old, old-young. The people — immigrants and descendants of immigrants from all over. The history and the language — Hebrew, our language. The language of prayer and Torah, with which I have had uninterrupted engagement through the years; the spoken language, with which I have had very little engagement for far too many years. The music, the poetry. Gathered, concentrated in one place. Home.

On that bus, I saw it, and I felt it, and I knew: I’d rededicated myself to Israel. I may not live there physically, but my life has more life to it when I’m there. The richness of the experiences will fade: the intimacy of our Hanukkah sharing, the liveliness of Israel — which, for Laurie and me, feels like home, at least as much as our physical home in North Carolina. Lucky for us, Hanukkah will come around again, a time to rededicate ourselves to the people, places, and ways of living that mean the most to us, here and there.