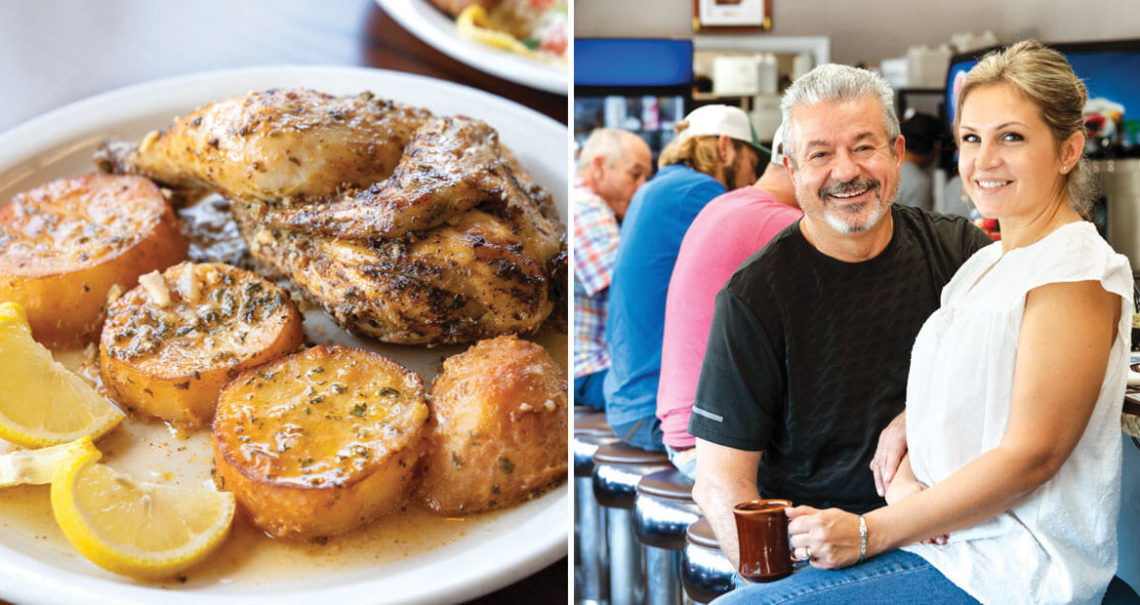 In a corner where several North Asheville streets converge to create a neighborhood known as Five Points, Ilias “Louie” Sellas is flipping what may be, by his estimate, the seven millionth egg in his career. He started as a dishwasher at a Bronx diner soon after landing in the U.S. from Greece almost 45 years ago, worked his way up, and eventually bought the joint. He’s probably cooked 450 eggs a day, nearly 365 days a year, ever since.

And since 2013, he’s been working the grill at Five Points Restaurant, the Asheville diner he now owns with his wife, Patrycja “Pati” Jankowska Sellas. Today, like every day, Five Points is filled with regulars for whom the city’s rising restaurant scene is more rumor than reality: construction workers and retirees, 20-somethings with tattoos and families with kids, bikers in leather and bikers (the other kind) in spandex.

Pati is a Zen-peaceful presence over- seeing the front of the house as Louie, with a couple of line cooks, turns out orders for hamburgers and hash and, of course, eggs with lightning speed. He dances to the 1980s hits playing on the sound system, and he raps his spatula on the flattop dozens of times a minute. “You see that man, and you get tired,” Pati says with pride and affection.

The couple met almost 20 years ago when Pati, who’d emigrated from Poland, was waiting tables in one of Louie’s two New York diners. After the birth of their son, the couple would hand off the baby between their shifts: Louie’s 6 a.m. to 4 p.m. and Pati’s 4 p.m. to midnight. They never had the same days off. They wanted a different life.

Louie spotted Five Points when he came to Asheville to help a cousin open a restaurant. “I started talking to the owner, who was Greek, too, and I asked him if he was willing to sell,” Louie says. The owner was willing, and when Pati walked in the door, she told her husband, “Honey, I want it.” Five Points offered everything they’d dreamed of: easier hours, a familiar pedigree (it’s been Greek-owned since it opened in 1972), and, above all, loyal regulars.

“Asheville is full of restaurants, but it just doesn’t have this kind of place anymore,” says Ken Mertens, a native who settles at the Five Points counter around 7:30 a.m. most days. He usually orders oatmeal or eggs and bacon, “but I try to mix it up just to throw them girls off and keep them on their toes,” he says with a wink to Theresa Boyer, who’s worked at the restaurant for about five years.

“That man? He is here every morning,” she sasses back. All of the waitstaff have their own rapport with their regulars, and, like Boyer, they usually stay for years, a rare thing in an industry with lots of turnover. “My bosses, they don’t ask you to do anything they won’t do themselves, and they take care of us,” Boyer says. “This place is special — we’re special — because they made us special.” 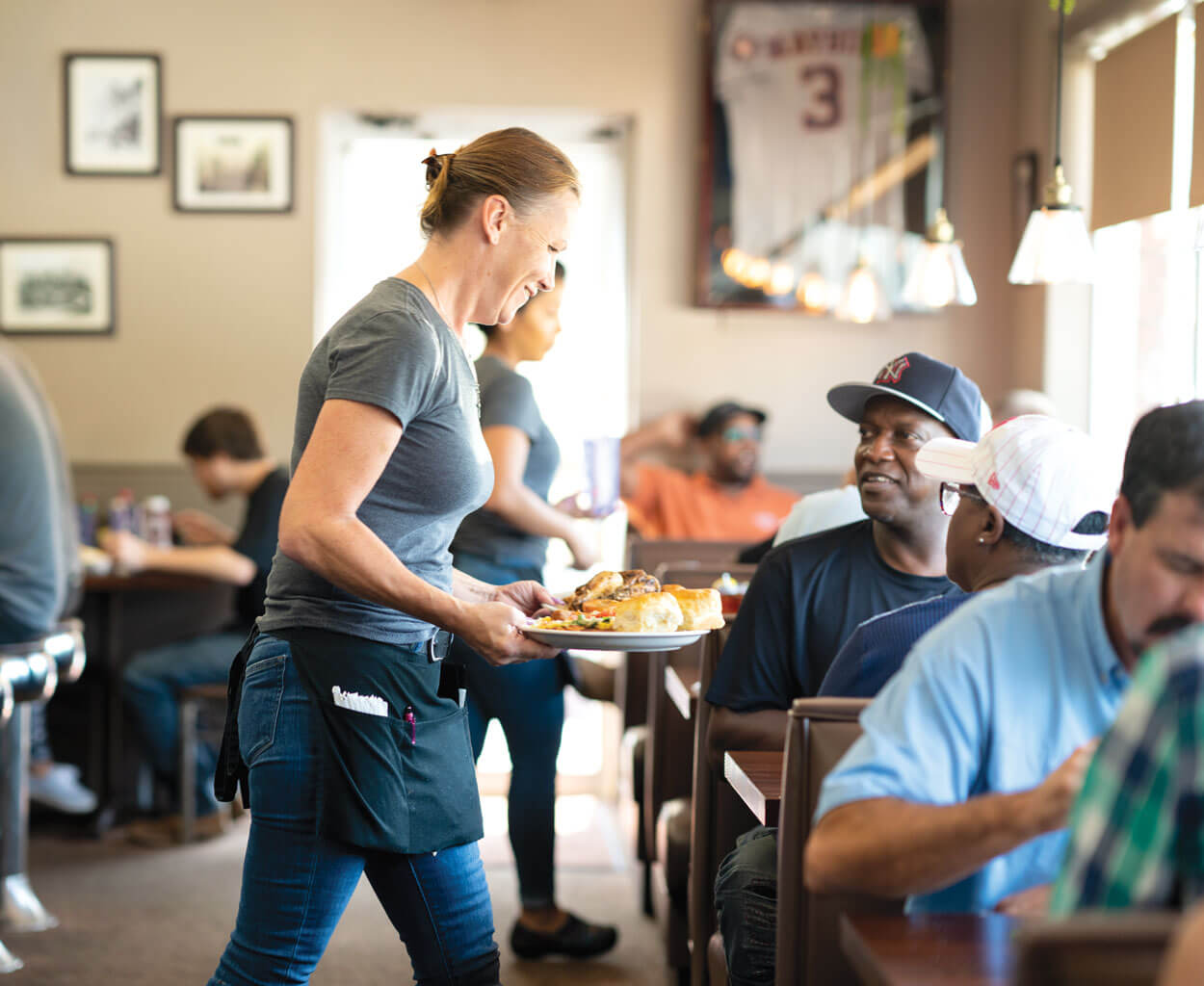 Server Carlina McIntyre has a special relationship with regulars like Rudy Maybin, who return for comforting classics. photograph by Lynne Harty

There’s something about Five Points that draws the same customers again and again. Everybody loves it when 95-year-old Bill Rocamora arrives with his home health aide. He was the restaurant supplier who equipped Five Points when it opened almost 50 years ago, and the bar stools he sold to the original owners still line the counter.

“Asheville is full of restaurants, but it just doesn’t have this kind of place anymore.”

Some things have changed since the Sellases took over. They’ve added popular seafood dishes, like salmon stuffed with crabmeat, and specials that reflect their own heritages, such as moussaka, spanakopita, and golumpki, a Polish stuffed cabbage that Pati makes from a family recipe. On Wednesdays, customers often call ahead to reserve their share of the Greek chicken and roasted potatoes, which can sell out in an hour.

There’s some worry among the regulars about how a new condo complex across the street might affect the restaurant. Will they still be able to get their favorite seat? Their favorite server? The Greek chicken special?

“I always believe the more, the merrier,” Pati says. “Maybe the neighborhood will change a little, but no matter what, we’ll be here.”