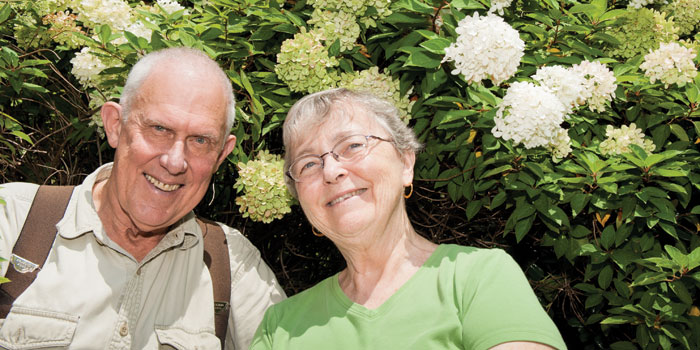 The 39 rose bushes that line Floyd Kemp’s property in Black Mountain probably would not give the impression that Floyd Kemp doesn’t much care for roses. These bushes he finds less than exciting make up the front wall to his property, which contains some of the finest two acres of flora in southern Appalachia, and if you’re going to guard such a land, you may as well guard it with something most other people like to look at. Plus, Kemp says, his wife loves roses, and that’s reason enough for him.

What’s most interesting about the roses, though, is that just behind the wall of 39 is one more, a 40th rose bush, by itself, hidden close to the woods along the end of the property. Kemp calls it a spare, and if you want to know anything about Floyd Kemp, know that he keeps a spare rose bush, and he doesn’t much care for roses.

The rest of the yard is an accumulation of 20 years of planting flowers and trying to make retirement as workmanlike as possible. Kemp was a teacher. Kemp was a potter. Kemp is a painter. Kemp’s wife is a weaver. They are among a heap of creative minds who came to this area to retire but stopped a few miles short of Asheville, the full-blown arts capital, and stayed in tiny Black Mountain, a place with land to work. Kemp’s home is a main stop on an annual garden tour of town, but that’s not why he grows this garden, and that’s not what this place means to him.

When Kemp, 74, drives onto his property, he doesn’t see what other people see — the roses, the witch hazel, the magnolias, all things he’s planted — he sees an assignment. “I see it as something I have to do,” he says. And that makes him fit in here. Black Mountain is full of people who earned the right to do nothing but continue to do, a place for self-starters who see life as a creative continuum, a place for people who’d have just one more rose bush at the end of their property.

Kemp grows everything the acidic soil of the region will allow, and he does it with reckless precision. He knows every plant’s location, but he’s not afraid to plant anything anywhere. Each year, he takes clippings from his existing plants and places them in pots and labels the plants on spoons from Wendy’s. When the new clippings are ready, he sells some and uses the others in his own ground, just to see what happens. “Some die,” he says. “And some live.”

“He’s very good at starting things because he doesn’t care too much,” his wife, Lori, says. “If he cared too much, they wouldn’t grow. But if you just throw the cutting in the dirt, it’ll grow.”

Kemp’s father was an engineer, and Kemp’s mother studied economics, and Kemp initially went to school for architecture. And then he made a career out of teaching art.

Things grow how they grow, sometimes without reason. It’s true with this property. Floyd and Lori moved here in 1991, to these two acres just off of the main street in Black Mountain, after living in Iowa and Michigan their entire lives. The home, an oddly P-shaped structure built in the 1940s, was a church, a nursery school, and a pizza parlor in its previous lives. It had plenty of space for two people with plenty of interests.

When they moved in, Floyd was a potter. He had a kiln and workshop in the top level of a two-story building next to the house. Pottery was his passion. Every dish in their cabinets came from Floyd’s hands. His work is in homes around the country. His influence remains in hundreds of former students who took his pottery classes at Jackson Community College in Michigan during his 26-year career. He continued here in Black Mountain. He sold to 21 shops across the country. And then one day in 1998, he walked into the kitchen and looked at Lori and said, without reason, “I’m done potting.”

And that was it. The kiln went away. The wheel went away. And Kemp turned the pottery area into a half-woodshop, half-painting studio. He makes miniature Adirondack chairs and paints pictures of flowers by the hundreds. A crack runs through the concrete floor of the woodworking area, a reminder of the fiery kiln that once was, covered by sawdust.

Before the Kemps moved in, the yard looked hideous. The church that owned the property dug a large hole in front of the house in preparation to lay the foundation for a new church. But the church couldn’t raise the money and soon closed, leaving just the hole. Within a few years, Kemp filled it in, and now it’s just a recessed ridge, a reminder of the hole that once was, covered in clover. Kemp doesn’t treat his grass. He thinks natural clover is beautiful.

On the chain’s padlock is a label: BOAT CHAIN PADLOCK.

In his shop, on the toolbox, are labels: WASHERS. NUTS. BOLTS.

Kemp has so many things labeled around his property, he can never lose anything as long as he remains literate.

He doesn’t have labels on the two cast-metal benches in his backyard. He’s not even sure why he has them. “Sometimes I sit down just to use them,” he says.

For as much as Floyd Kemp nods to nature and fate with his flowers and interests, he’s meticulous and purposeful.

He keeps a chain on his mailbox. When he grabs his mail each day, he folds the chain just inside the door so that when the mailman opens the door the next day, the chain falls, and Kemp knows he has mail.

He has four lawn mowers in his shed, three riding and one push. He says it’s always good to have a spare lawn mower.

He has three wheelbarrows for that same reason. Two Weedeaters. Multiple everything. Backups everywhere to fill in if something breaks.

Kemp wears his glasses low on his nose and rarely pushes them up — the tip of his nose sometimes turns purple because of it. He doesn’t notice. He speaks carefully and softly, and he enunciates — he says yes, never yeah.

Lori does most of the talking for him.

Lori grew up in a small town in Iowa, and her father worked as an engineer on the railroad. When she was in college, she had polio. She and Floyd met a few years later, on January 11, 1959, in a painting class. They married four months later, on May 30, scheduling it then because her father was home for the weekend.

The day before the wedding, Floyd was working for a company installing a kitchen and jammed his left ring finger. The knuckle swelled, preventing Lori from placing the wedding band on his finger during the ceremony. They’ve been married 52 years despite that.

Floyd and Lori see their family on holidays, but everybody’s rarely together. One of their granddaughters attends the University of North Carolina at Asheville and lives in a building on their property where they used to run a crafts store. It’s now half-apartment and half-Lori’s weaving studio.

On quiet weekday mornings in the summer, Floyd and Lori take the Mabel K out to Lake James. They rarely use the bigger boat, the Zella P, which has a motor. But it’s there just in case. They prefer the Mabel K because it’s smaller and easier to maneuver, and they prefer to row quietly.

Floyd always lets Lori step into the boat first when they leave the dock. Once, Floyd accidentally changed their routine and pushed off before Lori climbed in, and she fell into the water trying to sit. Floyd, fully clothed, dove off the boat and into the water to help her. When they stood up, the water was only knee-deep. They laughed.

When they row, they don’t talk much. They pass the same places, so they notice houses with new paint jobs, and they notice different birds, and they wave to the conductors on the Norfolk Southern train that passes by the lake.

Floyd steers the boat, which means he sits on the back bench. “In rowing, you row backwards,” Floyd says, “and you look at where you’ve been.”

They stay on the lake two hours, and then they head in. They stop to eat on the way home. They only eat at fast-food places; Floyd doesn’t like to wait at fancy restaurants. Sometimes, they stop at Subway, where Lori orders the Veggie Delite and Floyd orders the Spicy Italian. Other times, they stop at Wendy’s, so Floyd can pick up more plastic spoons to label his clipping pots.

And they head to their home — their final home, Floyd says — and they drive past the line of rose bushes Floyd keeps, past the clover Floyd loves, past the mailbox Floyd rigs, and they put the boat Floyd built back in its spot between the hundreds of flowers Floyd plants. On the bottom of the boat is an inscription.

The same inscription is on all of their rowing oars, and on everything they’ve ever created.

Michael Graff is the senior editor of Our State magazine. His most recent story was “Carolina Cakes” (February 2012).