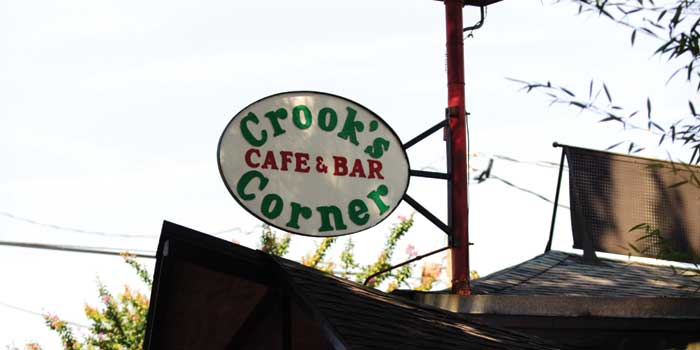 If you were a Tar Heel 20 or 30 years ago, you might’ve walked Franklin Street’s wide sidewalks and quieted your grumbling belly with a slice of Pepper’s pizza or a sloppy Hector’s gyro. But now, Chapel Hill is food central, gaining recognition from places far and wide for its diverse cuisine.

Chefs at places like Lantern and Elaine’s send out plates that make the New York critics swoon. And yet, the edible essence of the Southern Part of Heaven remains attainable to the starving undergrad. Some of our cherished haunts — Hector’s and the Ramshead Rathskeller among them — have gone the way of the four corners defense. But some persist alongside delicious new offerings, reminding us how good life tasted when we were a lot younger and much hungrier.

The long, low ceiling of this Chapel Hill institution recalls the building’s various incarnations as a taxi stand, bait shop, and pool hall. The place takes its name from 1940s proprietor Rachel Crook, who ran a fish market at the site before she was murdered there in 1951. Bill Neal opened Crook’s in 1982 and saw it become one of the most influential catalysts in the Southern food revolution that continues today. Current chef Bill Smith carries on the tradition with cuisine inspired by seasonal ingredients and regional traditions including the classic favorite that put Chapel Hill eating, and North Carolina eating for that matter, on the national map — the famous Crook’s Corner shrimp and grits.
610 West Franklin Street.
(919) 929-7643.
crookscorner.com

The Carolina Coffee Shop has offered couples on first — or 50th — dates a quiet haven and familiar fare since 1922. If you haven’t been there for years, take comfort in knowing that the Carolina blue-and-white checkerboard floor, the two-pronged brass coat hooks, the exposed brick wall, even the faded oil painting of a mandolin-playing jester in a striped suit, all remain the same. Still among the best items on the menu is the Black and Blue Chicken Sandwich, for just $8. It’s a chicken breast rubbed in mild Cajun spices, grilled to a juicy perfection, set on a sesame-seed bun, topped with onions caramelized to a delightful softness and blue cheese crumbles.
138 East Franklin Street.
(919) 942-6875.
thecarolinacoffeeshop.com

Top of the Hill Restaurant and Brewery

In earlier years, this was a little quickie mart on the corner of Franklin and Columbia called The Happy Store. Then it became Top of the Hill. And in the mid-1990s, it became a three-story behemoth that offers Franklin Street’s best views of Chapel Hill from its deep, top-level patio. An on-site brewery, encased behind a glass wall, makes award-winning beer, including seasonal ales, pilsners, and the cleverly named Frank Graham Porter. The menu has plenty of food to please many tastes. A favorite is the pimento cheese and pork flatbread, with housemade pimento cheese forming the creamy base for pulled pork and tangy barbecue sauce on a slab of whole-wheat flatbread. If a Southerner had invented pizza, this is how it would taste.
100 East Franklin Street.
(919) 929-8676.
topofthehillrestaurant.com

The national food press has written valentines to this sweet spot since it opened in 2008, charmed in part by the storybook interior. Carolina blue walls and a white, pressed-tin ceiling create a dreamy backdrop for spectacular models of wedding cakes that seem to float about the room. Cupcakes, cheesecakes, and piles of fluffy, pastel-tinted gelato fill a pair of glass pastry cases. The decor and the aroma of baking sugar combine to create a magical aura. You’ll feel like Hansel or Gretel, only with no witch to worry about.
140 East Franklin Street.
(919) 929-2100.
sugarlandchapelhill.com

Three decades in, this place still smells just like it did when the signature photo of Dean Smith flashing his “T” hand signal was snapped — like hot fry oil and attitude. Sadly, legendary cook Billy Ray Penny, who ruled the night shift with a deft touch at the fry basket and a sharp tongue, passed away a few years ago. Fans who frequented the place in the ’80s recall that he always gave better than he got, keeping irreverent frat boys and revelers in check with quick quips that inspired at least one campus group to create a fund-raiser T-shirt listing “Billy’s Top 10” sayings.
133 West Franklin Street.
(919) 280-8527.
time-outrestaurants.com

Lantern epitomizes the modern Chapel Hill food scene. Nationally renowned chef Andrea Reusing prepares inspired Asian cuisine using the freshest produce and pasture-raised meat. Illuminated by paper lanterns, the elegant yet cozy dining room draws food writers from across the country. Reusing, who won the James Beard Award this year as the best chef in the Southeast, made her name with her delectable tea-smoked chickens. She soaks the birds in a broth flavored with garlic, soy, anise, and ginger before roasting them in a pan strewn with black tea leaves, chiles, and peppercorns. The resulting chicken is tender and moist on the inside, with a crunchy skin and an exotic flavor. It’s a dish you’ll remember.
423 West Franklin Street.
(919) 969-8846.
lanternrestaurant.com

For more on the Tar Heel Town that appeared originally with this story, check out Chapel Hill.