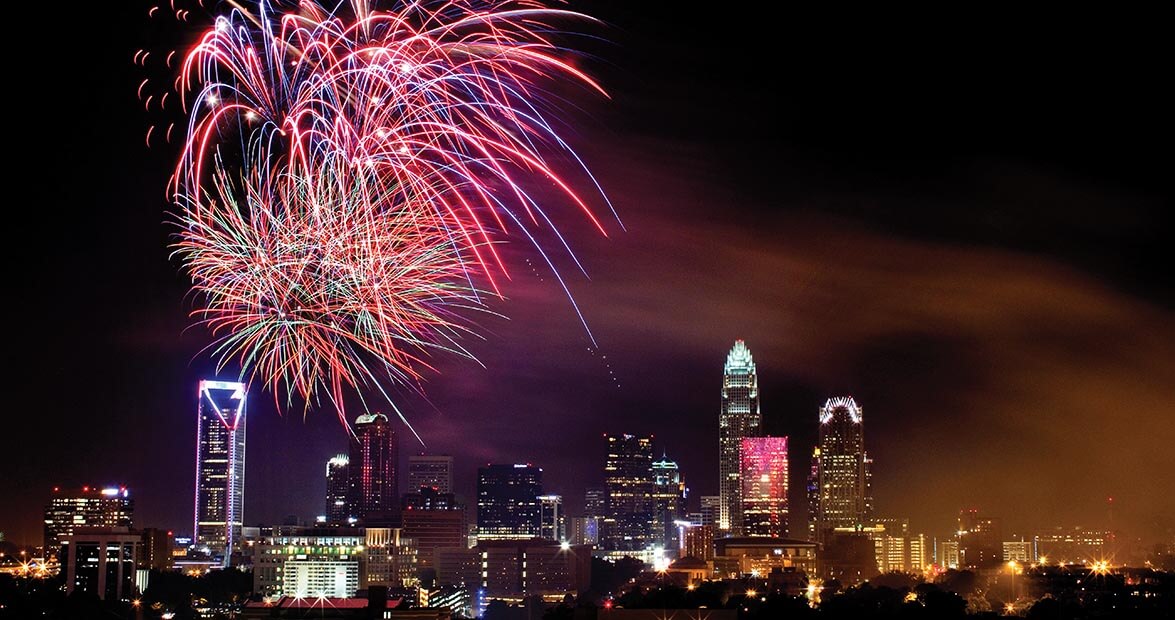 It’s almost stealthy, like an unpredicted, overnight snowfall. You’ll notice when you walk the dog, or drive to Starbucks. Sometime while you weren’t paying attention, while you were sleeping, they’ve appeared everywhere, in every size, every guise: flags. June’s official Flag Day is no match for this July day of flags flying and flapping and fluttering. On a mailbox, from a stoop, an antenna, a porch railing, a window planter. Piers, barns, docks, fences. In Coke bottles and Mason jars. That red, white, and blue; that Old Faithful; that Stars and Stripes. Sure, we can display a flag 24/7, but there’s something about this day that’s urgent. That propels me back inside to fetch ours, furled in the coat closet, and to snugly fit its pole into the doorframe bracket, hum a little Sousa, and join the proud and mighty band of flag-waving Fourth of July patriots.

Then, of course, there’s that weighty decision of how far to go in dress. How outrageous, how outlandish, how over-the-Uncle Sam top? Let’s pause to thank our forefathers for shunning purple and orange in their color selection. Because everyone can rustle up a little red. Or white, or blue. Maybe not at the same time, if you’re theme-averse, but don’t be a party pooper. Myself, I’m hoping to see someone in a white goatee, and will consider it a stand-out Fourth of July if he’s wearing striped pants and walking on stilts. (How do they do that? I look for knee joints religiously, to no avail.) But no one’s asking you to wear sunglasses in the shape of stars, no matter how appropriate, or to sport a top hat. Even a navy blue visor or bandanna will suffice, or an armful of red, white, and blue straw bangles from the dime store. I would, however, simply leap at the opportunity to wear a full-fledged flag, like Hayley Mills did in Disney’s Pollyanna, though the irony of “America the Beautiful” sung in a British accent was apparently lost on Uncle Walt.

Some of us will wear red inadvertently. A ketchup stain, for example. Those watermelon drips. Dribbles from a strawberry daiquiri or Bloody Mary. Or whatever you’re drinking in that red Solo cup, be it beer or lemonade. ’Cause, today, food and drink will be involved. Coolers and grills and ice-cream churns will be involved. There’s that incredible number of avocado purchases for Super Bowl guacamole. Surely hot dogs on the Fourth of July are right up there on the staggering stats list. But then again, when it comes to appropriate all-American food, there’s the hamburger, as well. Barbecue. Steak. Probably even pizza. Someone will make the argument that blueberry ice cream beats out peach, for color alone. I’m partial to the Neapolitan slabs of my youth, or those red, white, and chemically-electric blue ice-cream confections shaped like rockets and sold out of tinkling ice-cream vans. Last year for July Fourth dessert I made a sheet-pan flag cake, with strawberry stripes and a blueberry field of stars, that, I must confess, was cuter in the planning than in the execution.

Can we just get this out of the way? It’s going to be hot. Admit it: You’d be disappointed if it wasn’t hot. The Fourth of July is an outside day. Softball, horseshoes, picnics, 5Ks. As Milton might say today: They also serve who only stand and sweat while watching parades, whether downtown or down the driveway. While July Fourth parades may not be as ubiquitous as Christmas parades, neighborhood parades prosper. In Greensboro, the Kirkwood neighborhood July Fourth parade has been taking place for decades. Instead of a marching band, you’ll cheer formations of another sort: the lawnmower brigade, or the Diaper Daddies. On the road that runs in front of my sister’s beach house, trikes and bikes and skateboards and wagons and a golf cart or two are tricked out in so much bunting and balloons that the passengers and riders are superfluous. On sandbars and inlets up and down our long coast, impromptu parties are held when boats pull ashore on any old beach, stake their spot, anchor lawn chairs in the water, and proceed to celebrate. If you ever want to thank your lucky stars that you’re not — or if you long for the days that you were — 20 years old, cruise past the spectacle of hundreds of boats moored in Masonboro Inlet on the Fourth. Ahoy there to nine hours of no bathrooms while wearing a wet bikini. Good-bye.

Not being a math person, I was never quite successful on the school playground, during taps at camp, or at Girl Scout meetings, at learning how to properly fold a flag. All those complicated triangles confounded me. But I knew — and was awestruck by — the rules: Never allow the flag to touch the ground; burn rather than discard it; raise briskly, lower slowly. And I’m still affected by, experience that gut-wrench reaction to, our Star-Spangled Banner when it flies at half-staff; yet I simultaneously find comfort in its presence, because we know we’re all in this — honoring, remembering — together. Just as we’re all celebrating together, and in the name of Old Glory, on the Fourth of July. This glorious day. This fortunate nation. We country of patriots. We Americans.