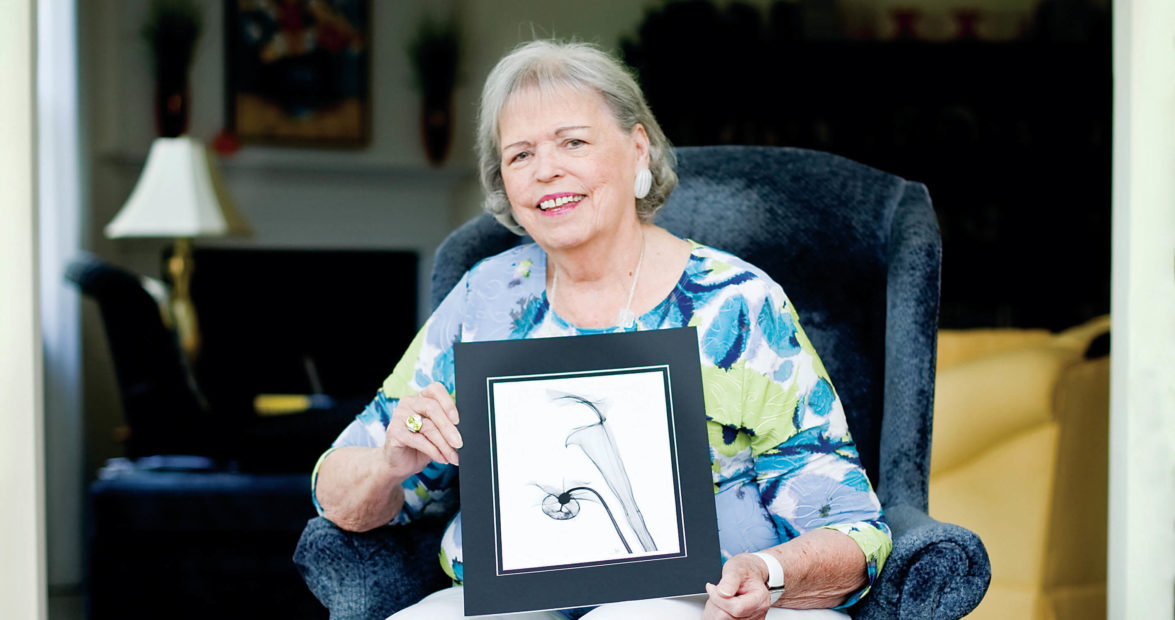 You rarely look at an X-ray, mysterious and gray, and think, “Lovely. That’s something I’d like to frame.”

Mostly, the X-ray brings bad news printed in black and white. Broken arms. Fractured skulls. Spots on the lung. Even the name sounds ominous: X-ray, like something a super villain would build inside a secret island volcano.

So Frances Apple’s artwork — her stark portraits of wisteria, gladiola, and hibiscus — strike a viewer even harder for having formed inside an X-ray machine.

By exposing flowers, spices, and even sliced peppers to soft radiation, she peels back the outer skin and shows a hidden world in shades of black and gray. Looking at the inside of a tulip, you see the flower laid delightfully bare, as if you’d traveled up its stem in a bead of water.

In Apple’s hands, the X-ray becomes a brush, or a chisel. And in her care, its beams aren’t hunting for tumors or cracks. They’re unraveling layers, tunneling deeper, opening folds like Georgia O’Keeffe peering into the chambers of a rose.

“You can actually see inside the flower,” says Apple, who is 80. “You can actually see the little stamens.”
Apple took up the craft two years ago following a long career as a radiologic technologist — or “rad tech” — most of it at Duke Hospital in Durham. The work also pays tribute to her mentor in the field, Jane Cox, who started X-raying flowers in 1947 and once displayed 33 of them at the State Art Gallery in Raleigh — a one-woman show.

Apple’s love for X-rays grew out of dread and terror. She was 11, maybe 12, and her parents took her from their home in sleepy Morganton to a big-city doctor in Charlotte, hoping to cure her ailing foot. This was the early 1940s, and she’d never had an X-ray before. To a child, the experience felt as foreign and frightening as a dentist’s drill or a barber’s razor.

The rad tech in Charlotte led her into a small room with walls lined with lead. It was gray and metallic inside. But the scariest part was being left alone while the rad tech shut the door and peeped at her through a tiny window. Surrounded by big machinery, left by herself, Apple felt like a prison inmate.

But the rad tech was so friendly, so reassuring, that her fear quickly melted. He pointed out all the gadgetry and explained how it worked. He led her around and showed her the whole procedure, explained that she’d only had a superficial X-ray, and that the beam was only strong enough to see beneath the skin. She walked away that day having seen the world through a new and powerful eye, a ray that could take a picture of your insides, of your bones.

One day, Apple thought, she could be the same kind of ambassador for electromagnetic radiation.
“I told my parents that’s what I wanted to do,” she says.

Waiting along Apple’s career path was Jane Cox. A nursing school graduate, Cox served as supervisor at the Park View Hospital School of Nursing in Rocky Mount until 1941. Then 35, Cox switched careers and joined the Duke Hospital Technicians Program. Later, Cox taught physics at the women’s college that is now the University of North Carolina at Greensboro.

She was a tough, imposing woman who suffered no fools. Apple already knew Cox, a family friend, by the time she finished high school in 1948 and started her rad tech training. But she hadn’t experienced Cox’s no-nonsense strictness.

She felt it firsthand at a statewide rad tech meeting. A relative newbie, she tried to take the seat next to Cox in the front row. Cox instructed her to take a seat in the back with the other greenhorns.

“There was a real message there: You’ve got to earn your way up,” Apple says. “She made a professional out of me before I had been in the business five years.”

Cox was also a gardener, and as far as Apple knows, that was the inspiration for her flower X-rays. She had dabbled with them, strictly as a hobby, positioning jonquils and orchids as if they were faces in a portrait. She also shared her off-hours pastime with students taking her X-ray technology class, demonstrating the contrasts shown in the petals.

Cox wasn’t the first to use an X-ray machine like a fine-art camera. The art form dates to at least 1913, and it gained attention in the 1930s both for its aesthetic value and its botanical research. A few artists continue doing floral X-rays as commercial art today. In 1990, retired dental professor Albert Richards published The Secret Garden: 100 Floral Radiographs.

“With a rose,” he writes in his online gallery, “the nearest petal hides from our view all of the other petals and structures that lie beyond it, so much of the beauty of the blossom is hidden. With the penetrating power of the X-ray, floral radiographs reveal all the details of the successive layers of petals and other structures.”

But in North Carolina in the 1940s, Cox’s work made her a vanguard. She took a sample of flower pictures to the National Convention of X-ray Technicians in 1949, calling the exhibit “Shadowgraphs.” She won so many raves that her jonquil and orchid pictures were chosen for the Smithsonian-sponsored International Photography-in-Science Salon, which toured the globe.

She spelled out her methods in technical detail in a 1953 issue of The X-Ray Technician, a national journal. In those pages, she assures viewers, “I have used no special chemicals or techniques for the processing of my films — only routine radiographic darkroom procedures were adhered to.

“My subject matter has been everything from a holly branch, for Christmas cards, to the lovely fragile orchid,” she continues. “I have found the orchid to be my most interesting and expensive subject. I still wonder if it is the botanical structure, the graceful pattern, the moisture content, or just the overall loveliness it portrays that makes it my first love.”

When Cox died in 2002, she left slides of her floral X-ray work with her doctor. Apple already had a few of Cox’s prints, and the doctor allowed her to borrow the slides and copy them. Some of the flowers weren’t marked with anything more than a number, so Apple had a green-thumbed friend identify them.

She wasn’t sure what Cox would think, but Apple cast an eye heavenward and said, “I’m sorry, Jane, but I’m selling your prints.”

Then two years ago, retired from the rad tech trade, Apple started her own dabbling. She X-rayed lilies, daisies, and dogwoods, working out of Duke University, fitting the flowers into a machine the size of a microwave.

Today, you can see Cox’s and Apple’s work side-by-side and compare the two generations of rad tech thinking. They both have a playful side: Cox used to X-ray tobacco leaves with cigarette butts; Apple cuts open banana and bell peppers or takes a deeper look into the essence of rosemary, oregano, and dill.

“You can X-ray anything,” she explains, “if you’ve got enough juice to get through it.”

Their artwork raises money for the North Carolina Society of Radiologic Technologists scholarship in memory of Cox. It goes to both undergraduate and graduate students in North Carolina. Both the art and the scholarship appeal to people who are stimulated by uncovering truths buried below the surface.

In the shadowy petals of Cox’s and Apple’s work, you can see past the limits of the human eye, glimpsing a richness that lies just slightly beyond view.