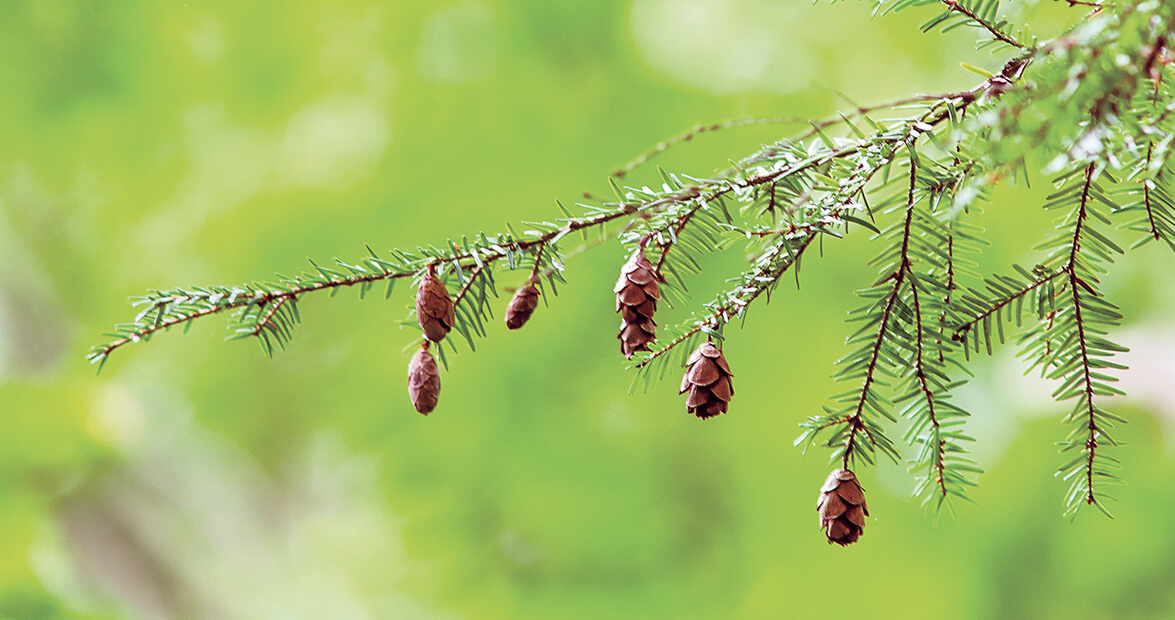 Fred Hain knows that when a forest dies — from its deep root system up to its canopy that once teemed with birds, squirrels, and insects — it makes no sound. For the past two decades, he’s watched green hemlock forests in the North Carolina mountains quietly fade to ashen gray.

Now Hain, director of the Forest Restoration Alliance, and his fellow researchers are trying to restore the last of the state’s hemlock stands, which have been devastated by a tiny insect. Smaller than a poppy seed, the hemlock woolly adelgid (uh-DEL-jid) has killed thousands of acres of hemlocks in the eastern United States, including North Carolina, where trees are dying from Cumberland Knob on the Blue Ridge Parkway, all the way to Cherokee.

“You can’t save every tree. There are just too many,” says Harris Prevost, vice president and operations manager of Grandfather Mountain. “You’d think a big, majestic tree like that could fight those little bugs off, but that’s just not the case.”

Until the 1950s, when the adelgid invasion began on the East Coast, cathedrals of eastern hemlocks had lined Appalachian rivers and dominated forests for 15,000 years. Native Americans made food from hemlock bark and brewed healing teas from its short needles. Settlers used the wood for homes and the bark for tanning leather. Squirrels, deer, birds, and fish depended on them. 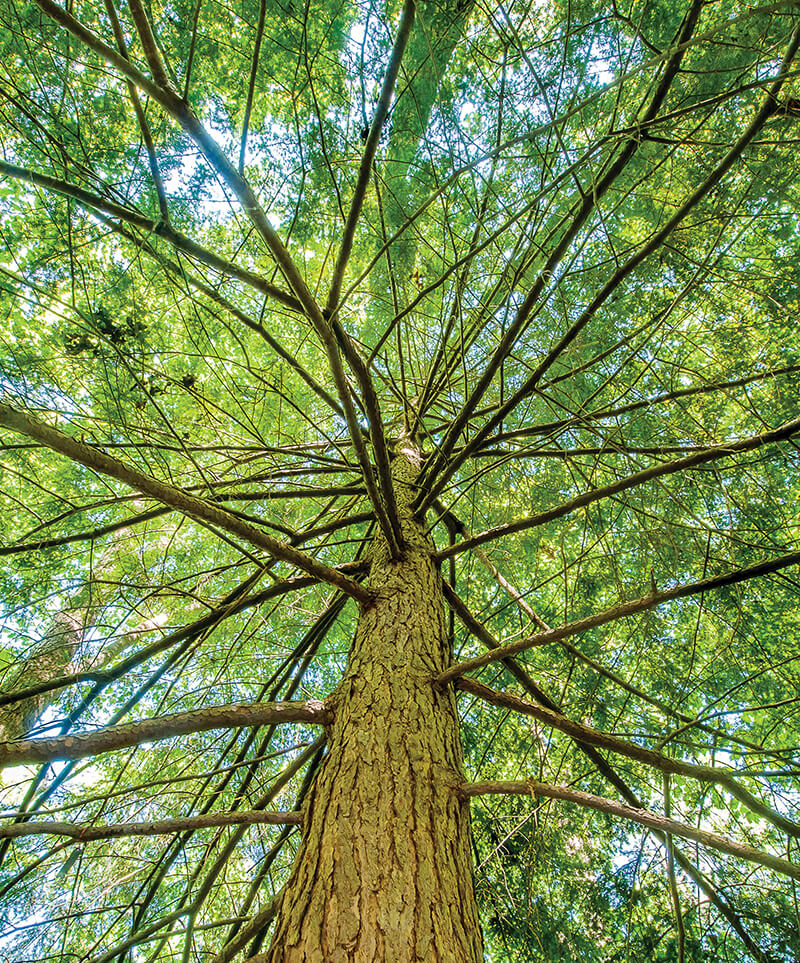 The hemlocks’ Christmas tree-like crowns give way to layers of needle-covered branches cascading sometimes 150 feet to the ground, and their trunks can grow to more than six feet in diameter.

In a mature hemlock stand, lush canopies are dense, and the lack of light produces a fairyland underneath. Spritely goldthread flowers creep out of the earth. Deer nip at buds from low-hanging branches. Turkeys bed in the soft needles, and birds hop from twig to twig, picking insects and plants from the hemlocks’ taupe-colored bark.

In the 1950s, a private plant collector near Richmond, Virginia, imported an Asian hemlock species for his wife’s garden. Beneath the hemlock needles lay some strange bugs that seemed so benign, so sedentary, that no one thought they could cause trouble. They were largely ignored.

As it turned out, the insects were woolly adelgids. They are native to China and Japan, where hemlock trees have become resistant to them. In the U.S., though, hemlocks aren’t immune to the insects, and the adelgids have no natural predators.

These “small, very wrinkly blobs,” Hain says, are about half the size of a poppy seed. After the adelgids hatch from their white, woolly egg casings, they crawl along hemlock branches until they reach the needle’s base. There, the baby adelgids cement themselves to the tree and unfurl ribbon-like mouthparts between the needle and the branch. The insects spend the rest of their short lives feeding on the tree.

The tree reacts to adelgids by flooding its own body with defensive chemicals. But this immune response also hurts the tree; this, coupled with its depleted energy stores, eventually kills it. Depending on weather conditions, such as drought, trees can succumb within as few as four years. And when the trees die, entire forest ecosystems change, allowing invasive species to take over. 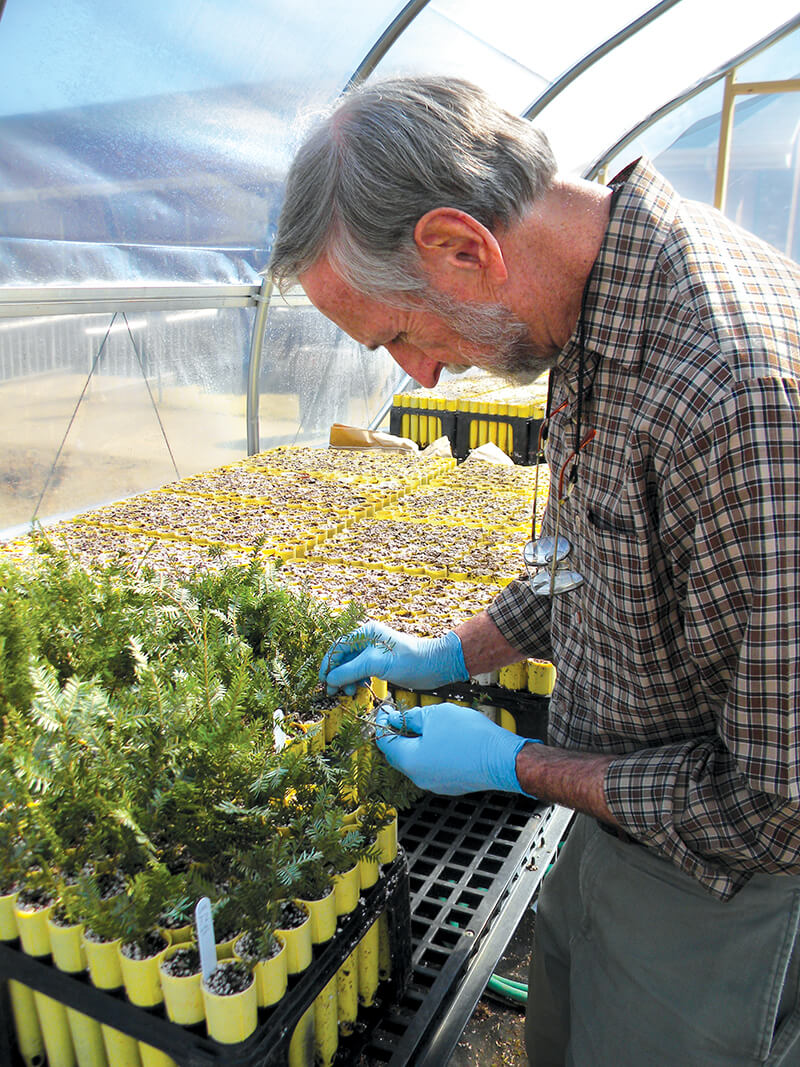 Hain first witnessed trees dying from adelgid infestations while working as a forest entomology professor at NC State University in Raleigh. Foresters in North Carolina began studying the insect about 25 years ago, Hain says, “after seeing what the adelgid was doing in other states.” He and other researchers across the Eastern Seaboard mapped the adelgid’s territory as it expanded, trying to stop its spread. They pumped trees with insecticides. They bombarded the forests with adelgid-gobbling beetles. But in forests, the trees are too numerous to treat, and in the end, the treatment had to be selective, and was ultimately ineffective.

Scientists call hemlocks a keystone species, meaning that they are vital to an ecosystem. “Lots of animals rely on hemlocks, especially migrating birds,” Oten says. Black-throated green warblers, red-eyed vireo, and blackburnian warblers depend exclusively on hemlocks. “Bears use the older hemlock cavities for nesting, deer browse the leaves and bed under the low branches. In the water, there’s the trout.”

Shielded by the boughs, the streams stay cool, while fallen needles make the water acidic. Both create perfect conditions for trout. When hemlocks die, stream temperatures rise, and the fish can’t survive.

“Walk into a hemlock forest in the summertime when it’s sticky out, and underneath these trees it’s nice and cool,” says Robert Jetton. He is a research assistant professor in NC State’s Department of Forestry & Environmental Resources, and he collects hemlock seeds to preserve their genes for future generations.

Some spots remain protected from adelgids, for now. Kristin Collins, a writer living in Raleigh, was hiking with her family on Alum Cave Trail when they passed through a surviving stand to another, which had been drained dry by adelgids. “It’s kind of scary that you’re walking through these huge, tall trees with their feathery needles, to ruins, where the trees have turned to big, dead sticks still standing out of the ground,” she says. “It’s like you’re passing out of a temple and into a graveyard.”

Hain took note of other hemlock species that didn’t seem to suffer as much from woolly adelgids as the North Carolina species did. He also noticed that, even surrounded by dead stands, some individual trees lived, apparently resistant to or tolerant of adelgids.

“Many people would have given up long ago, but he believes in these trees, and wants future generations to see them.”

Hain formed the Forest Restoration Alliance in 2007 and began breeding resistant trees from Chinese and U.S. varieties at a lab and nursery in Waynesville. Today, he and other alliance members scour the adelgid-ravaged hemlock stands for survivors. They also rely on citizens to report any living hemlocks to the alliance’s website. Every reported tree is investigated by an alliance member.

“After we find an individual tree that looks healthy where everything else is dead and dying, we collect cuttings from it that we root back in Waynesville,” Hain says. It’s possible that some of these snipped branches will grow into trees capable of withstanding the hemlock woolly adelgid — although from cutting to transplant, the process takes 30 years.

“Fred is passionate and patient,” Oten says. “Many people would have given up long ago, but he believes in these trees, and he wants future generations to see them. He sees our responsibility in making that possible.”