SPONSORED BY The Crystal Coast

Golden-brown fried flounder; tender shrimp and scallops; tangy coleslaw; piping hot hush puppies — plus a cheery yellow lemon wedge, of course, and that perfect pour of sweet tea. North Carolina’s bountiful ocean harvest can inspire seafood dreams, and along the Crystal Coast, you have no shortage of options to make those dreams come true.

The Crystal Coast starts at Emerald Isle and stretches 85 miles along the Atlantic Coast all the way to Harker’s Island. No wonder most locals and vacationers arrange days around meals featuring fresh seafood. Wherever your beach day takes you, plan a stop at one of these local favorites.

What Will You Explore?

Eighty-five miles of gleaming beaches only begin to tell the story of The Crystal Coast — from crystal waters bordering sandy, sparkling beaches, to wild mustang horses and a towering lighthouse, the natural beauty of the Southern Outer Banks awaits exploration. 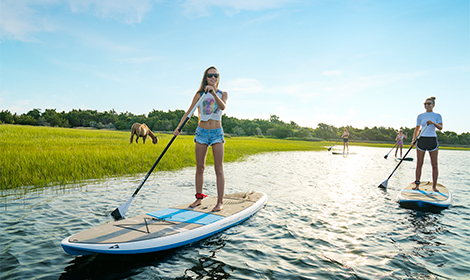 From Caribsea’s rooftop lounge, diners can watch the sun set over glistening Bogue Sound. But the real showstoppers are the crab cakes: Lightly battered with huge chunks of fresh crabmeat, you can have yours served over mixed greens with roasted sweet potatoes and lemon-mustard beurre blanc, or on a brioche bun topped with remoulade, romaine, and tomato.

If seafood isn’t for everybody in your party (if it is, we suggest RJ’s “famous” lightly battered shrimp), check out the Backyard Classics portion of Rucker John’s menu. Since it opened in 1988, this Emerald Isle establishment has earned repeat customers with selections like prime rib and, our favorite, the chargrilled pork chops ladled with a sweet and tangy BBQ sauce.

Jeff Garner knows what you’re thinking: Sanitary is known for its heaping, fresh portions of fried shrimp, scallops, and oysters. “That’s true; we’ve been sourcing fresh, local seafood for four generations,” says Garner, who runs the waterfront Sanitary with his sister, Lisa. “But last week, my dad went to Ocracoke and got fresh blue fish, and our broiled blue that we got from those fishermen were the best!”

An extension of Sanitary, this eatery began as a grab-and-go option for deli sandwiches seven years ago. As more sandwich lovers showed up, the Garners grew expanded their one picnic table to a two-story, open-air pub with views of Sugarloaf Island. “It’s fun and easygoing,” says Jeff’s wife, Stephanie, who runs Yellowfin Pub. “We have multiple TVs, and you can bring your dog. It’s just a cool atmosphere.”

Follow the Big Rock statue to this Evans Street grill and order the heaping portion of grilled shrimp served over wild rice. It comes topped with a lemon-herb grill sauce and a side of grilled zucchini. 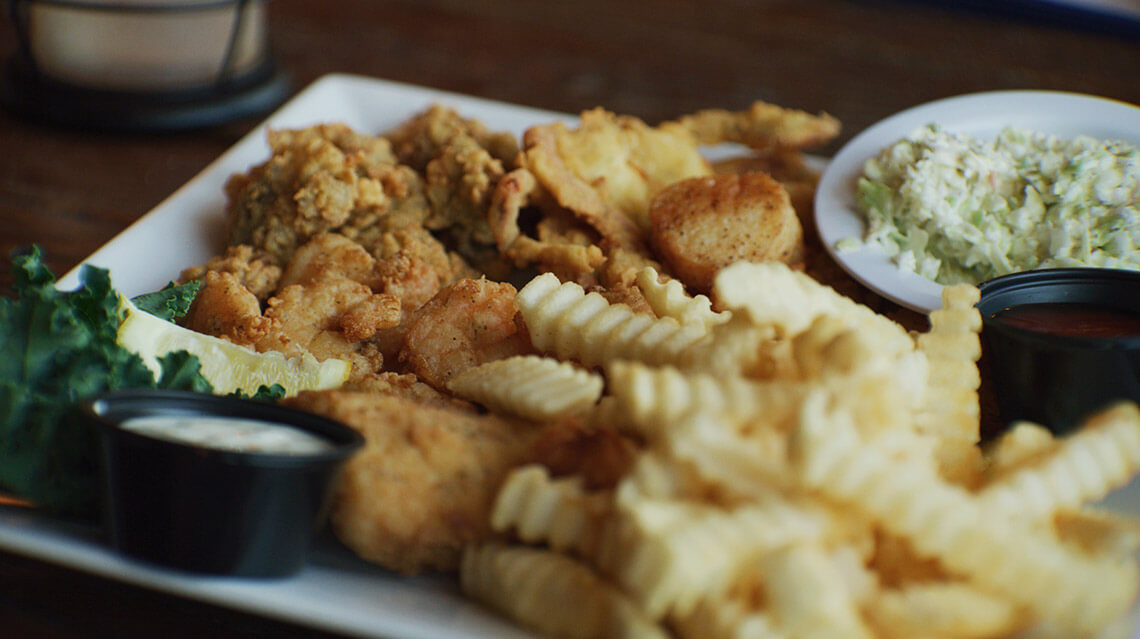 When the problem becomes how to narrow your options, the solution is to have four of your favorites all at once. Choose from scallops, oysters, flounder, soft-shell crab, and shrimp. You can get them broiled, blackened, or fried, all served with slaw and fries (which brings the total to six favorites, after all).

Want to swap your fried fish for fried chicken? Picture this: a country-fried chicken breast perched on a cheddar-scallion homemade biscuit smothered with sawmill gravy, and served with whipped potatoes and garlic green beans. From its Southern take on tapas — “Red Neck Egg Rolls!” — to its seafood entrées, Floyd’s 1921 perfects the art of down-home fare. 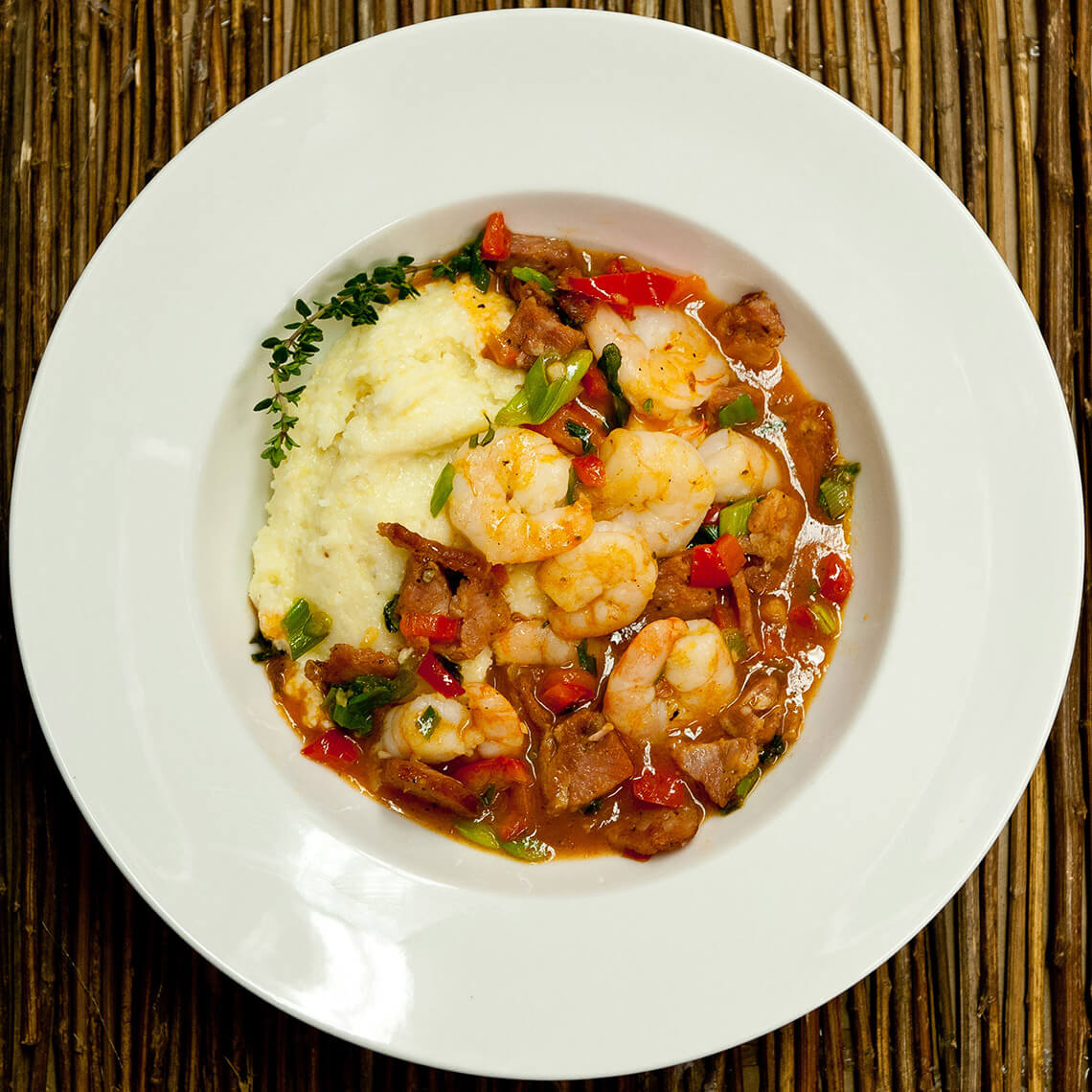 What pairs well with the Skeeterita aka a fresh lime margarita served on the rocks? How about a mound of cheddar-cheese grits covered with shrimp, smoky andouille sausage, sliced mushrooms, and green onions, all sauteed in a mild, roasted red-pepper broth. For dessert, try the simple key lime pie with a graham cracker crust and whipped cream.

With the breeze at your back, you’ll have a few decisions to make when you walk up to the window at The Shark Shack. First, do you want your basket with fish bites, shrimp, buffalo shrimp, fried oysters, fried scallops, clam strips, or fish fillet? Next, do you want a side of French fries, hush puppies, coleslaw, potato salad, or summer salad? Third, and perhaps most crucial, which two homemade sauces do you want? You can pick from cilantro lime, lemon dill, cocktail, tartar, remoulade, ranch, buffalo sauce, wasabi, and honey mustard. Final decision: Which picnic table is just right to kick back, relax, and enjoy the best of summer at the beach?

Take away the sign out front, and you’ll think you’ve arrived to dinner at a friend’s house. With a wrap-around porch and cedar shake siding, one of Atlantic Beach’s oldest homes now houses a favorite local restaurant. “We don’t have a huge menu, but everything we serve uses local products,” manager Bobby Salzler says. 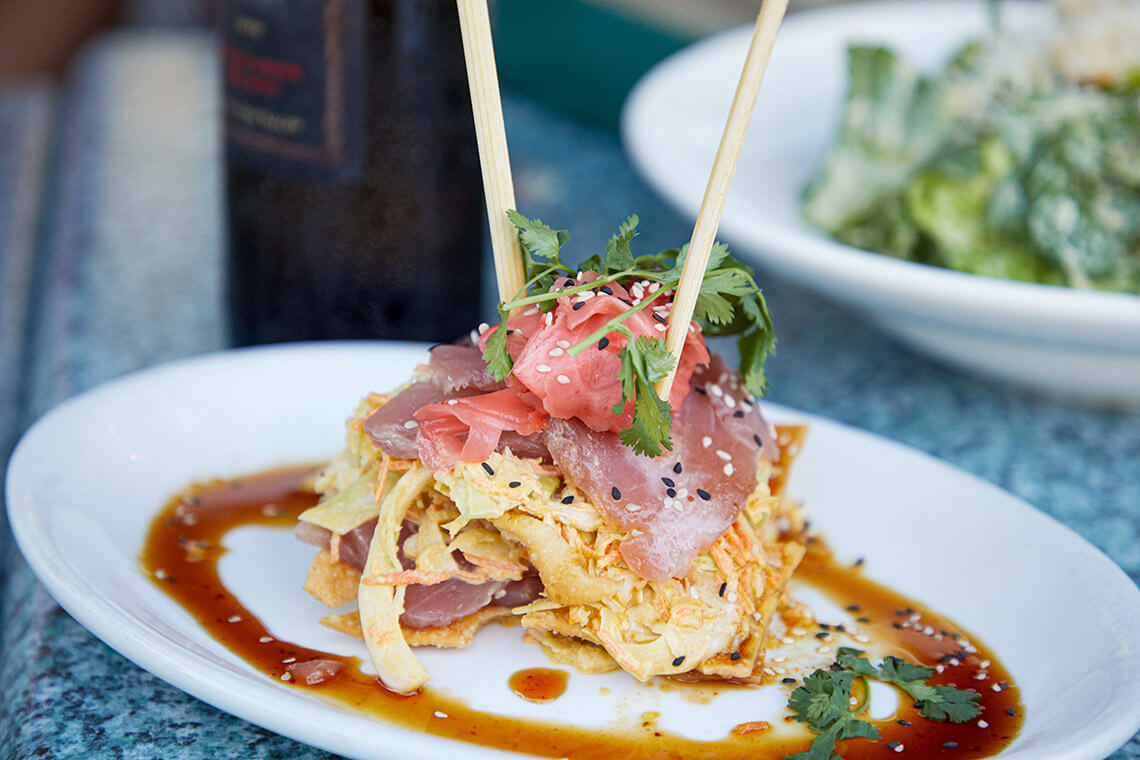 The appetizers at this cozy downtown staple offer telling indications of the inventive yet reliable fare: The yellowfin tuna fillet is served with crispy wontons, wasabi coleslaw, pickled ginger, cilantro, and sweet garlic sauce. The cheese and fruit plate comes with house-made pimento cheese, spiced pecans, Granny Smith apple slaw, and lavosh crackers. When you move on to the main course, you’ll be treated with delicacies like pan-seared shrimp and scallops served over homemade capellini and cooked in a vermouth cream sauce with roasted tomatoes, fresh basil, and spinach. 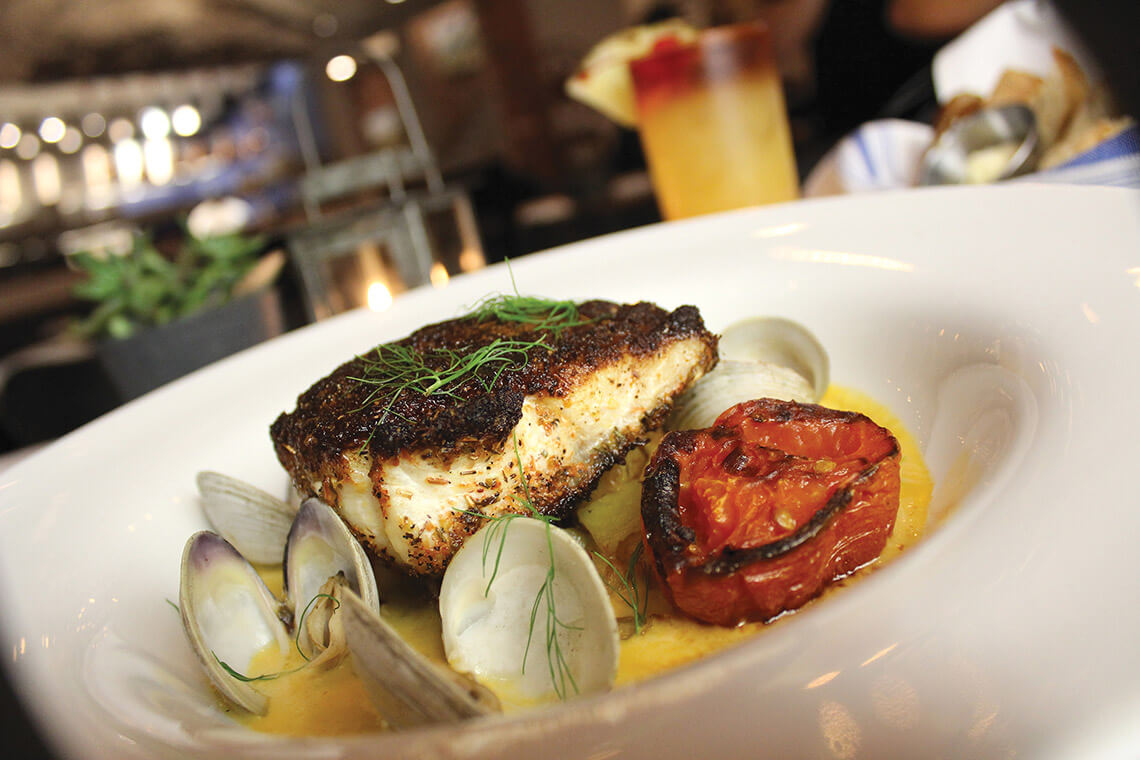 At Moonrakers, the blackened grouper comes with clams and roasted tomatoes. Photography courtesy of Moonrakers

Overlooking Beaufort’s Taylor’s Creek — with three floors of waterfront dining — there’s not a bad seat in the house at Moonrakers. The blackened grouper is a local favorite, served with clams, fennel hash, and roasted tomatoes in saffron cream. And don’t miss this chance to discover a new wine pick: Moonrakers’ list has more than 90 selections.

At Fish Hook, folks usually get their fried oysters with slaw and fries, but you can swap it out for other sides, like the baked potatoes, fried okra, green beans, mashed potatoes, or onion rings. If you’re looking for seafood on the lighter side, try the blackened shrimp wrap.

Check the chalkboard before you place your order at this relaxed diner. Daily specials include fresh, local shrimp and oysters, flounder, and soft-shell crabs when they’re in season. Regardless of your entrée, start with the clam chowder, made with cornmeal dumplings, and end with the Down East lemon pie.