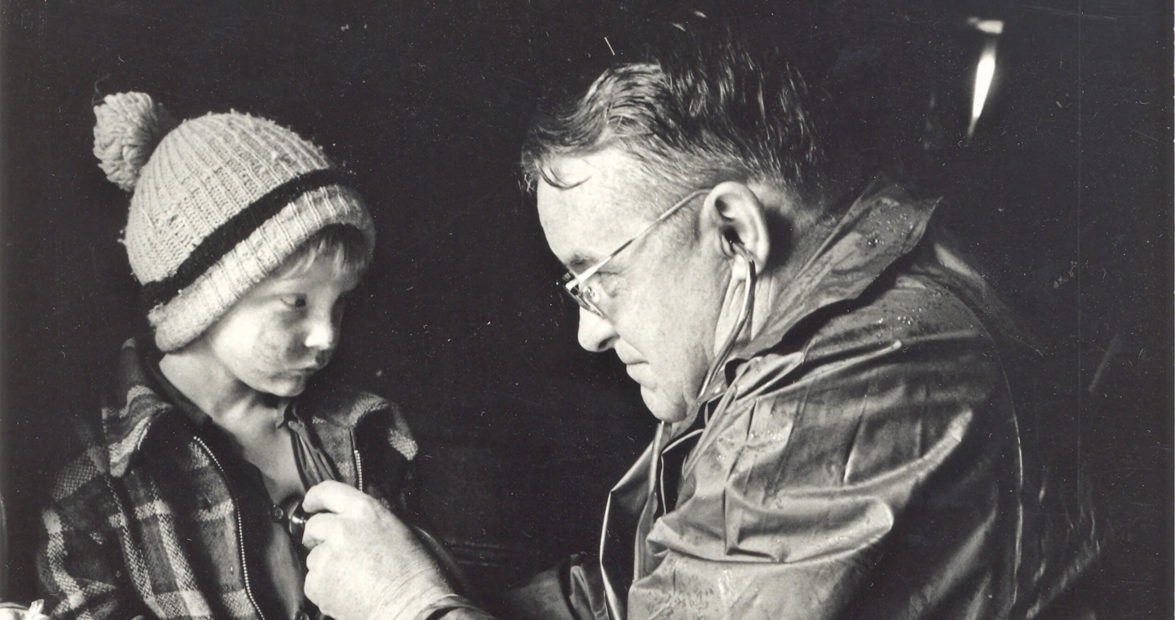 Before he even climbed out of his pickup truck, the doctor could hear crying from inside the cabin. Carnettie Owen had lain miserably in her bed for weeks. A wound that had probably started as a small cut or scratch had grown into an ulcer covering most of her calf.

Even in the summer months, getting to and from Owen’s home wasn’t easy; it sat miles off a passage that was more cow path than road. In the winter of 1960, the sharp switchbacks leading up Pinnacle Mountain were little more than shadowy traces under weeks of snowfall.

Folks living on the mountain and in nearby Balsam Grove hunkered down during blizzards. They were used to making do until the spring thaw. Seventy-year-old Aunt Carnettie, as everyone knew her, was too sick to make do.

So Dr. Gaine Cannon, with the help of a friend and Owen’s two sons, headed for the cabin. His truck bogged down in drifts, sometimes teetering close to cliffs that dropped off into rock-strewn gorges. His passengers got out and pushed.

Finally, they pulled alongside the mountaintop cabin.

As soon as Cannon opened the front door, Owen shrieked, “You ain’t agoin’ to take me down there and cut off my leg!”

Unperturbed by her objections, Doc Cannon spoke softly to Owen as she shivered in her bed from cold and fear: “Aunt Carnettie, you knew my father, Dr. J.A. Cannon, didn’t you?”

“He was a fine man, too,” she replied, “and if he was here right now he wouldn’t be awantin’ to cut my leg off, neither.”

Cannon looked into Aunt Carnettie’s eyes. “Well, all I’m going to ask you, Aunt Carnettie, is to trust me and have the same confidence in me that you had in my father.”

Seven years earlier, Dr. Gaine Cannon came to Balsam Grove for a rest. He took over his father’s family practice in Pickens, South Carolina, in 1938 and, in 15 years, wore himself out. In Legette Blythe’s 1964 biography Mountain Doctor, Cannon recalled, “One day I saw 114 patients. I was always half-dead from lack of sleep.”

Like his father, he kept an unrelenting pace, grabbing a nap or a meal when he could, never turning a patient away, no matter the hour. His marriage ended in divorce, and not long after, Cannon suffered a heart attack and was ordered to rest. He retreated to the North Carolina mountains, where he’d purchased land and a small farmhouse years earlier in Balsam Grove, on the banks of Shoal Creek.

This place, not a dozen miles from where Cannon was born in Calvert, echoed with the memory of his father, who cared for the residents of the area’s most inaccessible coves. James Cannon covered the rugged terrain on horseback, bringing medicine and advice to independent mountain people unlikely to make their way to town for care.

On one of his first days on the farm, Gaine Cannon finished a late breakfast and headed to the front porch. He positioned his rocking chair along one edge. He wanted to immerse himself in the cove’s majesty, the beauty of its pines and rhododendrons, the soothing sounds of calling birds, even the distant baying of a hound. Here, he had no doubt he could relax and recuperate.

Except that he brought a book to the rocker with him.

Years earlier, he discovered the writings of Dr. Albert Schweitzer, a German medical missionary. Schweitzer’s story of selflessly caring for lepers in Lambarene, Africa, and his “reverence for life” philosophy shaped Cannon’s own commitment to provide help wherever it was needed, without regard for payment or his own needs.

The morning had barely passed by the time Cannon was no longer looking at the cove as a balm for his weary bones but an ideal location for a hospital that would serve North Carolina’s poor western counties.

At the same time, word started getting around that old Doc Cannon’s son had moved into the cove.

Within days of Cannon’s arrival in Balsam Grove, patients were lining up to see him.

“I saw them on the porch, I saw them in the living room, and it wasn’t long until I was working harder and putting in more hours at it than I had been before I came up to Balsam Grove to rest,” Cannon told Blythe. “The mountain folk for miles around swarmed into our little cove.”

Many had never seen a doctor before. The nearest medical facilities were 25 miles away in Brevard. Before long, Cannon had to head back to Pickens if he wanted any rest.

Unable to ignore the need he saw throughout the region, he started splitting his time between two practices, traveling on Sundays and Wednesdays to Balsam Grove, where he had turned the farmhouse into a clinic. He eventually hired another doctor to help him see patients in both Pickens and Balsam Grove.

When patients couldn’t make their way to him, he went to them. Sometimes he hauled them back down the mountains for long-term care. With a little more coaxing, Aunt Carnettie agreed to let Cannon bundle her up in blankets and drive her back to the clinic. He was able to save her leg, and she lived many more years.

Stories like Aunt Carnettie’s were common for Cannon. In fact, in those weeks when much of the nation struggled under mounds of snow and bitter temperatures, he visited dozens of stranded patients, often working 22-hour days. He carried food as well, helping more than a few families fend off starvation.

Described as a shy Gene Autry with glasses, his hair the color of iron, chin deeply cleft, Doc Cannon was devoted to caring for the families living in the Blue Ridge Mountains, says Beatrice “Cubby” Griffin, who worked with Cannon, helping to deliver babies in the 1960s. She remembers fondly a man who wanted nothing more than to help others.

When a patient couldn’t pay the $2 fee? “He didn’t ask for money,” Griffin says. “He never turned anybody away.”

In Mountain Doctor, Cannon stated simply, “Dr. Albert Schweitzer says that one should never do anything expecting something in return. Do it because there is a need for it. The fact that I give medicine to a poor fellow that maybe cures him of his ailment, is for me payment enough.”

By the fall of 1953, the doctor and a committee formed to improve the Balsam Grove community started talking seriously about building the hospital Cannon envisioned on his front porch only months earlier. Cannon had big plans for the 30-bed hospital. It would offer general medical services, surgery, and maternity care.

Long-term, Cannon also saw a nearby complex that included shops, recreation, and a community center — all of which could provide income for local residents and produce revenue to support the hospital.

At a community meeting, Cannon suggested a name that would adequately convey his high hopes for the project — the Albert Schweitzer Memorial Hospital.

“Few of those folks at the meeting had ever heard of Albert Schweitzer,” Cannon said in his biography.

But they would learn. Cannon talked often of Dr. Schweitzer’s deep commitment to serve humanity through thought and action, Griffin says. He referred so often to Schweitzer’s reverence for life that patients started greeting him with, “RFL, Doc.” He replied in kind.

One of Cannon’s most prized possessions was the letter he received from Schweitzer granting his permission and thanking Cannon for the honor. He framed the letter and hung it on a wall in the Balsam Grove clinic’s reception room.

Soon after proposing the hospital, Cannon and the community went to work. The improvement committee appropriated the $5.35 it had in its treasury to the hospital’s building fund. Cannon put his own money into the project and approached patrons all over the country for contributions. He asked patients to bring two good-size, rounded river stones to every visit; some brought truckloads.

Early on, the first building began to rise out of the ground, largely because of the community’s commitment. A stonemason worked for only $1 an hour. Boy Scouts and Girl Scouts dug earth. Local residents put in more than 30,000 hours of labor for free.

But progress was slow. The walls went up, and several exteriors reached completion. But finishing the interiors and filling them with equipment and furniture required more money. And raising money took time. In 1964, 11 years after Cannon first proposed the hospital, it had yet to admit its first patient. In the book, he laments the fact he never expected the project to take so long.

The trouble was, while building the hospital, he still spent day and night caring for patients. He recounted one day when a patient roused him out of bed before sunup. From that moment forward, Cannon worked without a break until 9 that night. He was still wearing the pajamas he had on when he answered the door.

Sadly, the pace proved too much even for his big heart. Cannon died of a heart attack in 1966, before he realized his dream.

The temptation might be to mourn the fact that the hospital as Doc Cannon envisioned it was never completed. It was 1980 before the first patients walked through the building’s doors, and by then, the structure didn’t meet modern codes.

So the Albert Schweitzer Memorial Hospital became the Balsam Grove Medical Clinic, which closed after only three years because the small community had a hard time attracting medical professionals.

The building, with its rock walls and enviable setting in the peaceful cove that inspired Cannon’s vision, stood empty for a while. Most recently, the structure has housed Brown’s Grower Supply and Nursery.

But people in Balsam Grove aren’t ones to focus on what they don’t have. When they think of Doc Cannon, which they do often, they remember a man who lived to serve, who made life better for poor mountaineers living beyond the reach of modern medicine in the 1950s and ’60s.

“He made a big difference, especially for the older people,” says Keitha Reid, who remembers being treated by Doc Cannon as a child and who served as secretary on the Balsam Grove Medical Clinic Board of Directors. “It was difficult to get them to come in for care. We didn’t have good roads, and it was important to have someone who would get in his Jeep and ride up to their residences and give them the care they needed.”

It’s an active place, where any day of the week you’re likely to walk in on a community dinner or clogging lessons, a game of bingo or a Red Cross blood drive. People throughout the community gather here for family reunions and community fundraisers. They decorate it for Christmas and celebrate the Fourth of July here.

Near the entrance, a huge rock, reminiscent of the stones used to build the hospital, bears a plaque with Doc Cannon’s name and his contribution to the community. Inside the center, several shadow boxes display items, such as medical certificates and baby blankets, saved from Cannon’s practice.

Such remembrances are appropriate for a man who influenced this community as much as Cannon did. But, Reid says, it’s the life that happens here that would have meant the most to Doc Cannon.