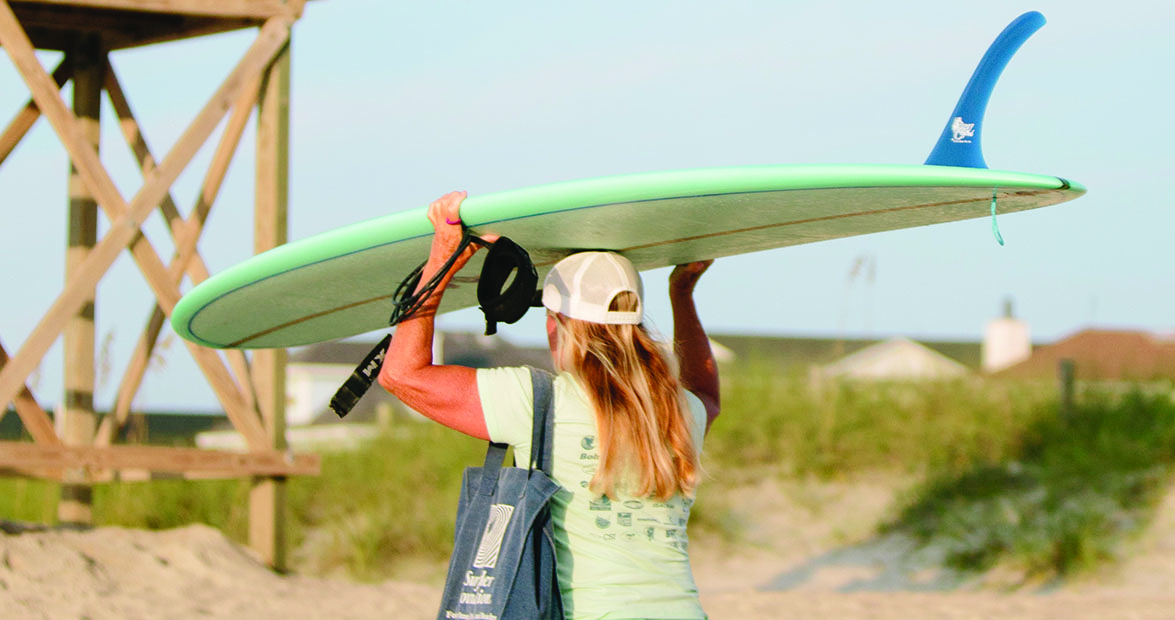 Jo Pickett is a morning person. At first light, she pulls her blondish, now grayish, hair into a ponytail, steps onto her yoga mat — sometimes still in her pajamas — and warms up her 62-year-old muscles. Then, she picks out a board: One’s in the bedroom, two hang from the living room ceiling, and the rest are in the shed or already loaded on PVC racks in the back of her white Sprinter van. Fifteen minutes later, depending on beach traffic, she steps onto the sand at her favorite surf spot, a series of breaks near Crystal Pier. This famous stretch of beach was once home to the Lumina Pavilion and giant wooden hotels, like the Sea Shore, where, photos show, guests surfed in the early 1900s.

With the unspoiled morning sand underfoot, Jo pauses to read the breakers rolling in. “People tend to flock to the water as the day moves on,” she says. “The early birds are the ones that get to enjoy it.” On this particular morning, the waves are firing. The swell she’s been tracking has arrived, and the ocean is kicking up bewitching surf. Before most people have downed their first cup of coffee, Jo has ridden a dozen waves and is refueling at Café del Mar with a Green Machine smoothie. She returns phone calls while she sips, barefoot, hair salty, wet surfboard propped nearby. Then, she paddles out for more.

Jo is a legend in these waters. The former U.S. national short board champion, U.S. senior women’s champion, Eastern Surfing Association champion, and popular North Carolina surfing coach now shares waves with the very surfers she has mentored over the past 22 years. Women surfers in particular credit her with inspiring generations of girls to take up the sport. She’s taken young surfers on adventures to ride waves in Costa Rica, Puerto Rico, Nicaragua, and El Salvador. Even her own kids — Leilani, Airlie, and Doug — have grown into keen competitors. “I told them by the time they turned 16 they ought to be able to beat me,” she laughs.

Not that Jo really cares about winning. Most surfers don’t. What moves her are the more philosophical rewards of surfing, the things she learns about herself every time she launches onto a roaring crest of seawater, knowing she may be tumbled and spit out. “All of life is rolled into surfing,” she says. “There’s disappointment, there’s frustration, there’s ‘Gosh, I can’t do this,’ there’s ‘Oh, look at that!’ All of life, right there. I love it.”

People who love surfing find ways not to age out of the sport. At some point, it gets real — hips catch, knees nag — but that only deepens their appreciation of what the sport gives them in return. “If you ask us now what surfing means to us, we’re going to give you a different answer than if you asked us years ago,” Jo says. After catching her first wave in 1972, when she was 16, she graduated to owning her first board, a Hawaii 5-foot, 11-inch single-fin: “narrow, pointy, and hard to stand on,” she says, reminiscing on her shady porch in Wilmington. Two ancient cats — Moo and Tabs — circle her bare feet.

Ever since those Gidget days, surfing has punctuated the turning points in her life. She met her former husband, Ed Pickett, in the ocean. “He took a wave away from me,” she says with a laugh. And she surfed through all three of her pregnancies — at least until her wet suit didn’t fit. 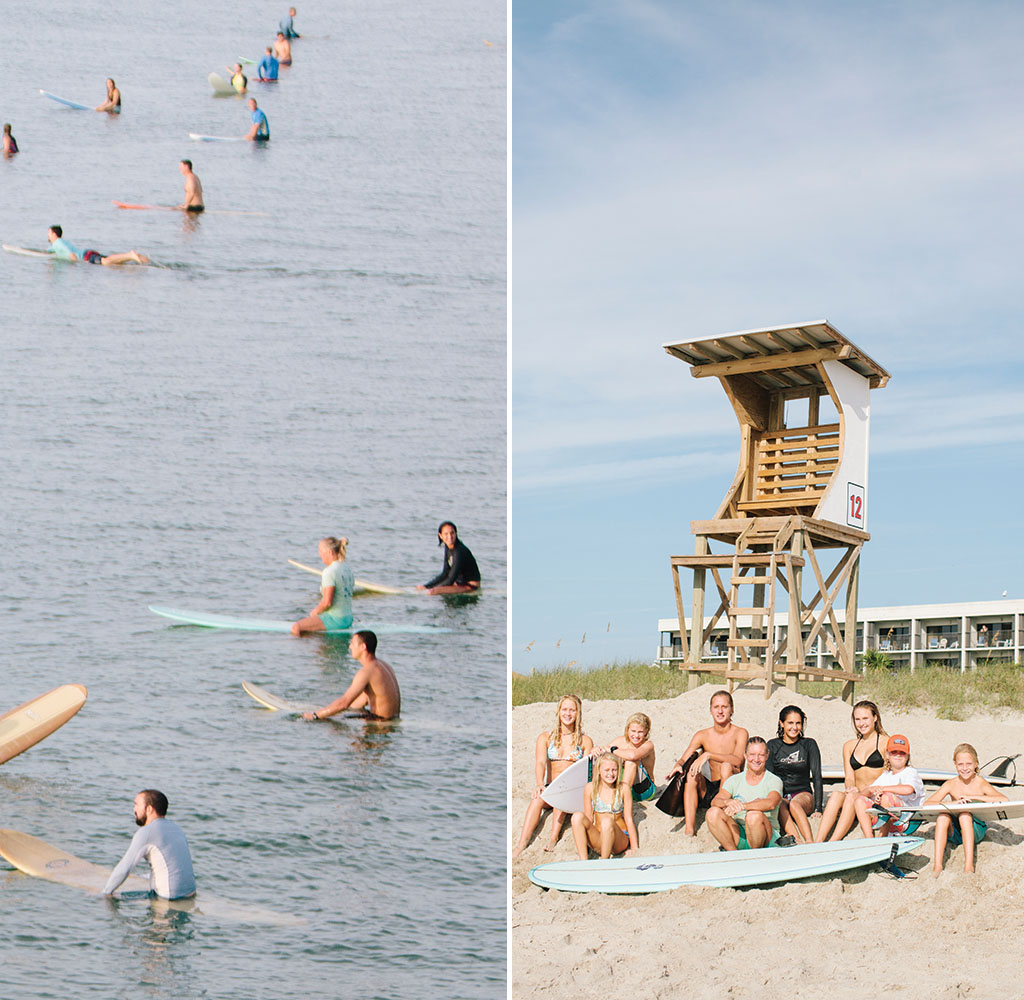 Jo taught herself to surf and recalls the joy of catching that first wave: “That’s the moment. And that’s why I still want to teach.” Current and former students share waves with her at Wrightsville Beach. photograph by Millie Holloman Photography

The Pickett kids — who’ve all taught at their mother’s local surf camps — knew how to ride waves before most of their classmates could ride bikes. “It was just necessary with our lifestyle,” Jo says. She and Ed took turns holding babies and catching waves, letting their kids build confidence playing in the shore break: “upside down and backward, water in every orifice,” Jo chuckles.

Firstborn Leilani was not yet 3 years old when, one terrifying morning, she slipped away from Ed and swam through 5-foot waves, determined to find out what all the surfing fuss was about. “Here comes Leilani with her water wings on, swimming through the lineup, out through the waves,” Jo says. Leilani swam out to her mother and climbed up on her board. “Very proud of herself. That was a clear indication of what was to come,” Jo says of her daughter, now 28 and an East Coast surfing champion in her own right.

Every December, when the summer and fall swells have fallen away, and the bracing chill has returned to Outer Banks waters, Jo heads for Nosara, Costa Rica. With a quiver of boards and a koa wood ukulele — which she says chose her years ago in a shop in Oahu — she sets up home base in a rainforest cottage a short drive from the beach. “I’m older now; the cold water hurts me much more than it used to,” she admits with a grimace. “God willing and the creek don’t rise, I don’t come back to North Carolina until spring.”

All season, a steady stream of students flies down from the U.S. for winter surf lessons — including, this year, two sisters in their 60s who hoped to progress beyond beginner waves.

By late spring, Jo’s eager to get back, to sink her toes into hometown sand at Wrightsville Beach — the very beach she played on as a child while her parents danced the jitterbug at the Lumina. Here, she started Crystal South Surf Camp, now in its 22nd year. It’s also the location of the Wahine Classic Surfing Competition — Teenie Wahines to seniors — an all-female, amateur/pro surf contest, which she runs. The East Coast Wahine (pronounced Wa-hee-nay; it’s the Hawaiian word for woman) Championships was founded in 1997 by a fellow surfer as the first all-female surf event on the East Coast. After it shut down in 2011, Pickett and her friends stepped forward to relaunch it in 2013, with a new name but the same mission: It’s a competition, yes, but also a celebration of female surfers. “The highlight of the summer,” Jo says. “I haven’t always been in an organizer role, but it’s been my baby for six years.”

Both of Jo’s daughters have competed. Leilani first entered at age 7 and now helps her mom with the event behind the scenes. “When she brought the Wahine back, people were really excited,” Leilani says. “They didn’t want to see it die.”

Surfing, Jo believes, is particularly empowering for young girls. It’s an assertive sport that requires them to step out of what’s comfortable and easy and into an always-moving, unpredictable world of strong currents and crashing waves. Learning to manage fear and to trust their strength, alone on a board, creates an unshakable confidence. “All I can do is develop their skills, recognize their potential and their moxie,” Jo says. But she’s being modest. The payoff is huge — for both student and teacher. “The combination of the human spirit with the ocean energy …” she says, her voice trailing off in wonder. “There’s not a more beautiful thing in the world to watch.”

At last year’s Wahine Classic, that beauty proved too much for Jo to bear from the shoreline. Spur of the moment, she jumped on her board and paddled out to surf in a heat against Leilani. The beach crowd hooted and hollered as mother and daughter split waves. “We’re competing,” Leilani says, “but, at the same time, there’s an understanding. She’s not going to cut me off.” Jo is, after all, Mom. Neither Pickett won. But neither cared. The moment was victory enough.