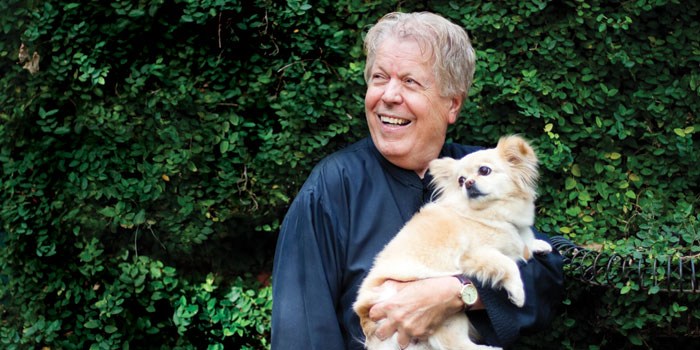 Lynn Pryer built his first theater in the garage of his childhood home in Fortuna, California, in the early 1940s. He had a burlap curtain and charged the neighborhood kids 10 cents to see the show.

Still working with a tight budget in 1994, Pryer opened the Gilbert Theater in the basement of his Fayetteville home. Instead of offstage lighting, Pryer passed out flashlights.

“I would tell audience members, ‘When these actresses step offstage, you put your flashlights on them,’ ” Pryer says. “We’ve come a long way since then.”

After the theater’s 2011-2012 season ends in June, Pryer, 77, plans to return to California to begin his second retirement. But he won’t forget the 100 plays and 18 seasons he spent in Fayetteville.

“I refer to Fayetteville as my third act,” Pyer says. “My first act was growing up and school. My second act was career and fatherhood. The third was Fayetteville, and evidently, I’m going to have a fourth act. It’s been marvelous, but it’s time to go home.”

Pryer moved to Fayetteville almost 20 years ago, after he retired from a career as a children’s librarian — a job that Pryer says suited his penchant for drama and storytelling — with the intention of starting a theater.

“Personally, I wanted a satisfying third act, and I thought, ‘What better way?’ ” Pryer says. “Home theaters are almost nonexistent now. But during antebellum times, planters would have a space for theater in their big house. So it was not unique in the South during the 19th century, but I know of no other since then.”

Pryer remembers how his heart raced as he descended the stairs of his newly purchased home on Brandts Lane in historic downtown Fayetteville. He hadn’t seen the basement, but his son, a Fort Bragg soldier serving with the 82nd Airborne Division, assured Pryer it was an ideal space for a theater.

“I bought it sight unseen,” Pryer says. “And he was right.”

Two years after the purchase, Pryer outfitted the basement with an 11-by-13-foot stage; installed seating for an audience of 40; built a tiny combination dressing room, prop closet, and backstage area; painted the entire thing black; and called the staging area the black box. He then named the theater after the namesake of Fayetteville, Gilbert du Motier, Marquis de Lafayette. A floral “G” painted on a tile above the front door of house number 689 told guests they were at the right home.

Joan and Arthur Ingalls heard about the up-and-coming theater from an actor and director who collaborated with the Gilbert during its earliest days.

The Ingalls estimate they’ve only missed about five plays in the theater’s 100-play repertoire, as evidenced by their presence in the Gilbert Theater guest book. It’s not a typical guest book of ink and paper; it decorates the stairwell walls leading into Pryer’s basement.

Pryer asked first-timers to sign anywhere they found an untouched patch in the mural of names; returning patrons located their original signatures and placed a check by them. Near the bottom of the stairs, a long line of checks strings out beside the names of Joan and Arthur Ingalls.

Although he’s not a native Southerner, Pryer adopted the region’s hospitality. He ushered theatergoers into a reception area, the dining room during off-theater hours, where they enjoyed Sangria and wine coolers before the show and carrot cake and coffee afterward.

The room offered a view of a beautifully, if somewhat haphazardly, landscaped garden from a Shakespearean dream. It served as the natural backdrop for two of the five plays at the home each year.

In 2001, zoning complications prompted the theater to relocate — first to the Arts Council building on Hay Street, then to its current location on the corner of Green and Bow streets.

“The black box in Pryer’s home was a joy,” Joan Ingalls says. “But we recognize the necessity of moving on. The final resting place for the Gilbert is a good one.”

The redbrick building — built in 1941 and modeled after Independence Hall in Philadelphia, Pennsylvania, and which once served as the city’s administrative offices, council chambers, and jail — now houses the Gilbert Theater on its second level and a children’s museum below.

The new space provides better parking options, an adaptable stage with lighting and effects, and ample room backstage. It includes the old city vault, which now protects the theater’s costumes, and adequate seating for a bigger audience.

Although the theater is still small, both in size (with seating for about 100) and in budget, it has a diverse following and a reputation for innovation — from its sold-out rendition of the rock opera Rocky Horror Picture Show to classical Shakespeare to one-woman shows and modern dramas that confront contemporary issues.

“I think the big draw is the diversity of presentation,” says Fayetteville playwright Stephen Miles. “There is no place [in Fayetteville] that anyone can go, outside of the Gilbert, to see some of these new, innovative plays. … The theater covers about anything.”

“Playwriting is a costly business,” Miles says. “Theaters take a chance every time they try something new. … The Gilbert Theater has been more than generous with local playwrights, myself included.”

Miles is currently working on a contemporary drama called Cluster for the upcoming season. His play premieres this month.

“Theater brings creativity to any community,” Joan Ingalls says. “The Gilbert provides a venue for local talent, a fact often lacking in repertory theaters and in traveling shows.”

Pryer’s absence will hurt, but Gilbert patrons say the playhouse will continue without him through strong support from its board of directors and the artistic community.

“Lynn will be missed, but he has established a viable asset for Fayetteville, which is a fine legacy for any man,” Ingalls says. “The Gilbert has created a family of artists, which has grown with each passing year. This is a solid gift to any community and is certainly a living gift to Fayetteville.”

Ali Rockett is a staff writer for The Robesonian in Lumberton. Ali’s most recent story for Our State was “In the Celtic Tradition” (July 2011).

Upcoming show:
February 2-19
Cluster
A contemporary drama that follows the interaction of four seniors, Cluster, by Fayetteville playwright and director Stephen Miles, is a play about the aches and pains of aging. The play’s heavier emotions, such as when one of the main characters receives a terminal diagnosis, give way to moments of tension-relieving laughter.