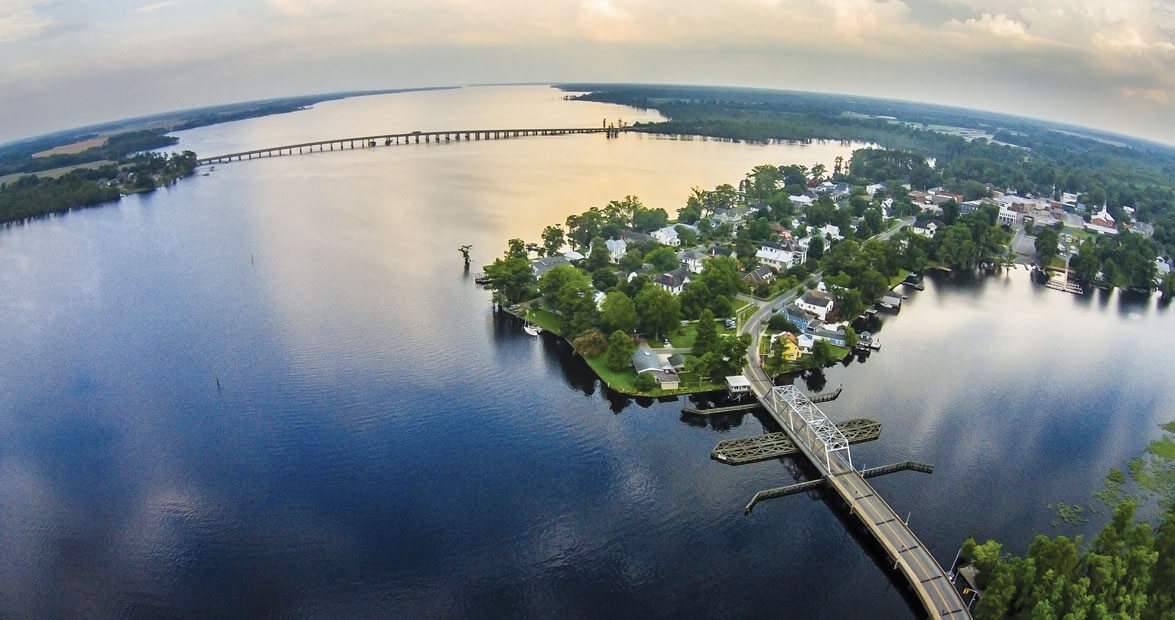 The view from one side of the Hertford Swing Bridge is a window into the past — a small natural harbor on the meandering Perquimans River, the shoreline a mix of white Victorian clapboard houses with grassy lawns and boathouses with peaked roofs, a boat launch, a church spire rising up behind.

But from the other side of the bridge, looking out across the widening river that, in a few miles, empties into the Albemarle Sound, you can see the present: the Jim “Catfish” Hunter Bridge, which carries traffic northeast on Ocean Highway toward Elizabeth City, bypassing Hertford at high speed. The bridge is named for the hometown boy who became a Hall of Fame pitcher for the Oakland A’s and New York Yankees, who died too young of Lou Gehrig’s disease (ALS) and is buried near the high school baseball field where he played as a teenager.

From that generic concrete span, you can’t see Hertford. You can’t even see the old bridge unless you’re looking for it, a brief glimpse of rusting gray girders crisscrossing over two asphalt lanes.

The Hertford Swing Bridge is 1929 high-tech. It rests perpendicular to a base built of heavy timbers, angled at both ends like the prow of a ship. To open the bridge and allow crabbers and rock-fishing boats to pass, Bill Cartwright, the longtime operator, first sounds the warning and lowers the crossing gates at either end. He pushes a button to release dual wedges that lock both ends of the bridge in place to Church Street, then activates the massive gears, pivoting the giant turntable 90 degrees to rest the bridge on the wooden base. The whole process of opening and closing takes about 15 minutes.

The bridge is also one of a kind — it’s the only operational swing bridge in the country that forms an S. Traffic from the north approaches slowly on the narrow causeway, flanked by cypress and water, along the top curve of the S. Whenever a vehicle drives onto the bridge, you can feel the whole span tremble. On the south side, the S completes itself past the bridgetender’s office into downtown Hertford, a National Historic District.

Almost immediately, you come to the site where William Edmundson — a Friend, or Quaker — conducted the first organized religious service in North Carolina in 1672, about 10 years after the first white settlers bought land from the Yeopim Indians. Beyond that stands the county courthouse and the downtown strand — brick façades shaded by green and blue-striped awnings: an antiques shop, an old-fashioned hardware store, a café, an art gallery.

It’s a quiet Sunday afternoon and not much is stirring, but the place feels like an undiscovered gem. I think of all those travelers zooming by on the Catfish Hunter Bridge, oblivious to this lovely village peninsula that is home to about 2,000 people.

I know the new bridge is a faster route to the Outer Banks and points north, but it’s the wrong bridge to take. If you turn left off the highway, throttle down, and cruise into town on Church Street, you can’t help but stop, if only for a few minutes, to get out and walk around, to smell the river and hear the gulls cackling overhead.

And heading south, when you creep — oh so slowly — along the causeway toward the low, rumbly bridge, off to the left you’ll see the turtle log angling up out of the brown water. Legend holds that it is the mast of a shipwreck. In the summer, the log is crowded with dark-shelled river cooters the size of dinner plates, as it has been for at least a hundred years.

And maybe, with just a little luck, it will remain part of the view from the bridge of the future.