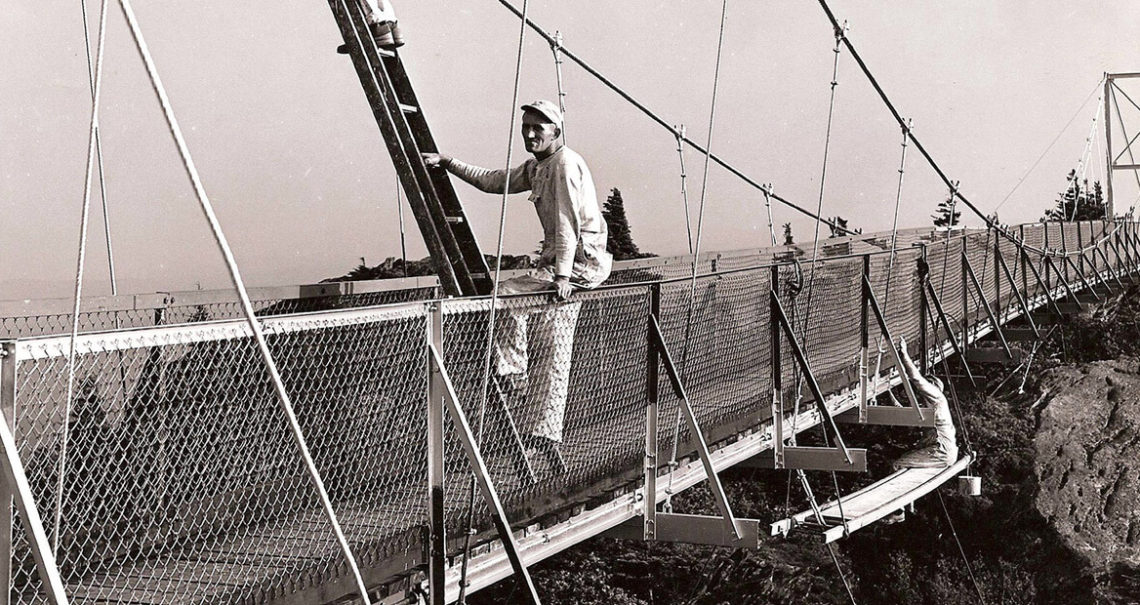 When 13-year-old Luke Wilcox, of Vilas, was in the first grade, he was asked to write about a family tradition. He was the only student in his class who didn’t write about a holiday. His paper started like this: “On the hottest day of the summer, we pack up a lunch and head to Grandfather Mountain.”

Luke crossed the mountain’s best-known attraction, the Mile High Swinging Bridge, every summer until he turned 7. But today, he has no memory of those trips. It isn’t a fear of heights that has deterred him; it’s the flight of 50 stairs leading up to the bridge’s entrance. Luke, who has cerebral palsy, has become too heavy for his father to carry.

On this sunny day in Linville, perhaps the warmest of the season, the Wilcox family has arrived at Grandfather Mountain without lunch bags. They’re here on a mission. Today, Luke is going to attempt the Mile High Swinging Bridge in his automated wheelchair, a feat allowed by the opening of the Top Shop, a new visitors center that gives guests access to an elevator and ramp leading to the bridge.

Tourists buzz around the family as his mother, Nita, points to the bridge. She asks Luke, “Would you like us to go with you, or do you want to go by yourself?” He decides to go it alone.

Nita walks midway across the bridge, waiting for her son to join her. Luke’s father, Bill, stands behind him and says gently, “OK, partner.” In this moment, for the first time in his life, Luke joins the legions of visitors faced with the question: “Am I brave enough to move forward?”

When Hugh Morton inherited Grandfather Mountain in 1952, building the Mile High Swinging Bridge was one of his first orders of business. He was inspired, in part, by his maternal grandmother’s limited mobility. He knew that she was no longer able to take rigorous hikes and that she pined for the long-range views she’d enjoyed in her youth.

Morton envisioned a 228-foot suspension bridge to span the 80-foot chasm between Grandfather’s Convention Table Rock and Linville Peak. He hired Charles Hartmann Jr. of Greensboro to draw up designs. Morton hoped the structure would afford people of all physical abilities the exhilaration of cresting a mountain. When the bridge opened on September 2, 1952, Morton’s grandmother, then 90 years old, was once again allowed the high-altitude views she cherished.

According to Robert Hartley, general manager of Grandfather Mountain from 1968 to 1985 and a lifelong friend of the Morton family, the bridge cost $15,000. The structure was fabricated in Greensboro by the Truitt Manufacturing Company and reassembled on Grandfather Mountain over the course of three weeks by the Craven Steel Erecting Company. Hartley’s father, Joseph, oversaw the process. Joseph Hartley advised the Greensboro installation crew to tie the bridge down with cables.

“They made fun of him for that,” Hartley recalls. “They said, ‘Oh, these old mountain people don’t know anything.’ ”

But they had never been on Grandfather Mountain in winter when the wind was blowing so hard that you couldn’t walk on all fours.

“Hugh Morton was a master promoter and a bit of a gambler. When he started out, people in Tennessee didn’t know where Grandfather Mountain was. Now, it’s known all over the world. You know, it’s sort of a miracle.”

Morton passed away in 2006, but each year, a quarter of a million people visit his mountain and improbable bridge. However, many visitors don’t make it to Linville Peak due to nervousness. Years ago, Morton noticed that people were less likely to cross if one or two guests were ahead of them, fearing that their weight would be too much for the structure to bear. So, he put up a sign: “Load Limit 40 Persons.” The bridge could actually hold hundreds of people, but visitors seem comfortable when they’re able to count 10 or 15 people ahead of them.

The number on the sign may be arbitrary, but it’s given many visitors the fortitude to leave solid ground, which isn’t actually a mile below the bridge. The name, coined by former North Carolina Tourism Director Charles J. Parker, refers to the bridge’s altitude above sea level. The moniker is a bit misleading, but it has an air of drama appropriate for a bridge that moves with the wind as if it’s a sailboat on the high seas.

For many years, Grandfather Mountain’s maintenance crew painted the bridge using homemade harnesses and a board that hooked onto the side of the structure. Workers would tie themselves to the handrails in case they lost their footing. “We absolutely dreaded it,” says crew member Richard Brown. “One time, we had a guy sitting in a chair painting the bridge, and he got seasick from the rocking.”

In the late 1990s, a routine inspection revealed that the bridge’s original cables were beginning to degrade, so management decided to rebuild the structure. The new bridge cost $300,000. Lucky for Brown, the only plank on the new bridge that needs paint is the sign that marks the exact point where the bridge reaches mile-high elevation. It reads, simply: “1 MILE 5,280 FT.”

Historically, it was believed that the bridge was 20 feet higher than a mile in elevation. When visitors with handheld global positioning systems began to question the accuracy of the mile-high plaque along the staircase leading to the top of Convention Table Rock, Grandfather Mountain officials hired Suttles Surveying of Marion to use satellite equipment to verify elevations. The surveyors found inaccuracies on some of the mountain’s markers, which had been on record since 1917. The mile-high point was found to rest near the center of the bridge, 98.2 feet from the Linville Peak side.

The current incarnation of the structure, which is America’s highest suspension footbridge, utilizes the original I beams erected in 1952, but its body was custom-welded on site in a process that required fire spotters in the woodlands below to ensure that the machinists’ sparks didn’t find kindling. Brown has found some interesting bits of history under the bridge, including several old silver coins. “Maybe they were coins people dropped over the years,” Brown guesses, “or maybe people threw them down to make a wish, like in a fountain.”

Morton watched many famous people cross the bridge over the years. Past guests include Johnny Cash and Tom Hanks, but it seems impossible that these stars could have drawn more attention than Luke, who is still poised on the precipice. If he crosses, he will realize a personal dream and take Morton’s original mission to a new level.

The crowd around Luke grows pensive, waiting. Finally, he inches forward. As he rolls toward Nita, she smiles behind round, black sunglasses and exclaims, “What a beautiful sight!” She is not looking out at the spectacular scenery below — which is peppered with rolling cloud shadows and glimmering lakes — she is looking at her son.

The bridge sways. Luke presses on. His father follows behind him, repeating: “I’m proud of you. You’re doing so well.” A group of strangers watches from the other side. When Luke’s wheels roll off the platform and onto concrete, the onlookers break into applause.

His mother, echoing the words Morton’s grandmother uttered on her first trip across the bridge decades ago, says, “In all my living years, I didn’t think this would happen. I didn’t think I’d get to see this.”

Nita smiles at Landis Wofford, the Grandfather Mountain representative escorting the family, before turning her attention to her son: “Luke, can you say thank you?” Luke’s eyes are impossibly wide, taking in the horizon. She directs him, “If you can’t use your voice, say it the best way you know how.” He moves his face away from the computer that allows him to communicate with words, pushes his head back against the wheelchair’s headrest, and puckers his lips to blow Wofford a kiss. It is an unexpected gesture of kindness that seems to hover for a moment in the space between them.