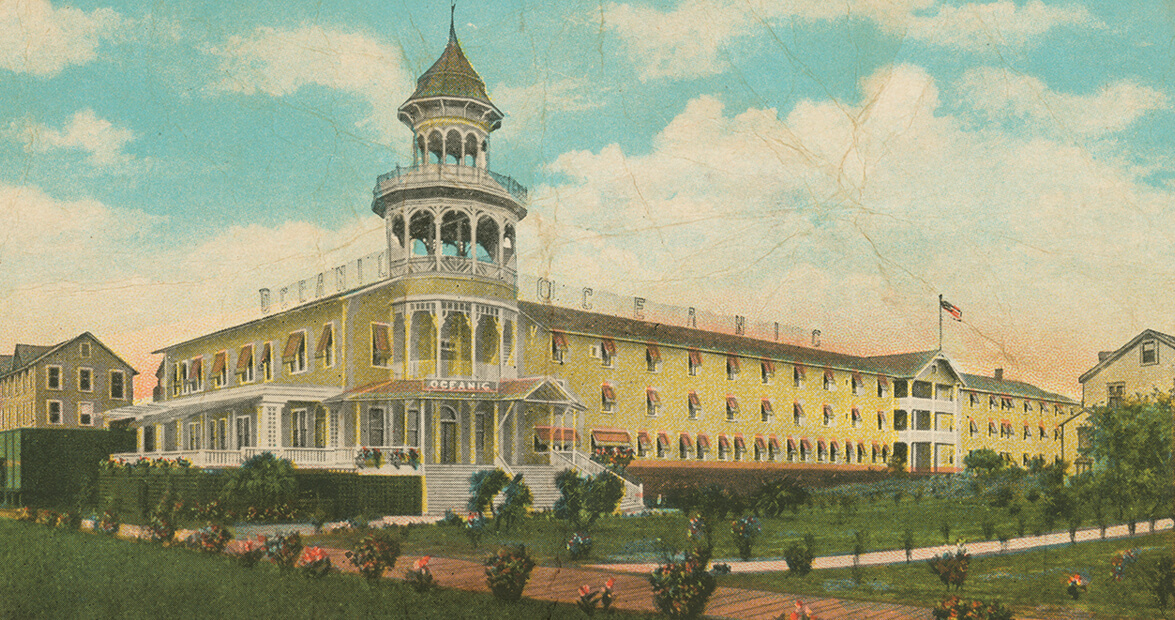 Linda Robinson’s father used to tell a story about the church pianist who serenaded the bucket brigade during the 1934 fire that destroyed the north end of Wrightsville Beach.

As the flames tore into the Oceanic Hotel, Robinson’s father, Ennis, and others abandoned their buckets and raced inside to salvage furniture and other valuables. Dashing out of the smoke and onto the beach, they could hear a song on the wind. A rescued piano sat on the boardwalk, and Vertabelle Loughlin, who played piano at Wrightsville Beach Methodist Church, pounded the keys as the hotel burned. The song: “There’ll Be a Hot Time in the Old Town Tonight.”

Robinson chuckles as she retells the story. She has some doubt about the veracity of it now, but that doesn’t take away from the drama of the event.

“I could picture in my mind people running in and out of the burning building while Vertabelle accompanied on the piano,” Robinson says. “I was always tempted to ask Vertabelle if it was true. I never did. I guess I was afraid she’d say, ‘No! Who told you that?’”

Wrightsville Beach has seen its share of disasters. Fire destroyed the Island Beach Hotel in 1894, and the Seashore Hotel burned in 1919. The Shell Island pavilion was left in ruins after a blaze in 1926. But the Great Fire of 1934 is the one most people talk about.

The 1934 fire destroyed more than 100 buildings and caused more than a million dollars’ worth of damage in what was then North Wrightsville Beach, including the barrier island’s crown jewel, the Oceanic Hotel, which sat on the corner across from where Wings Beachwear is today. 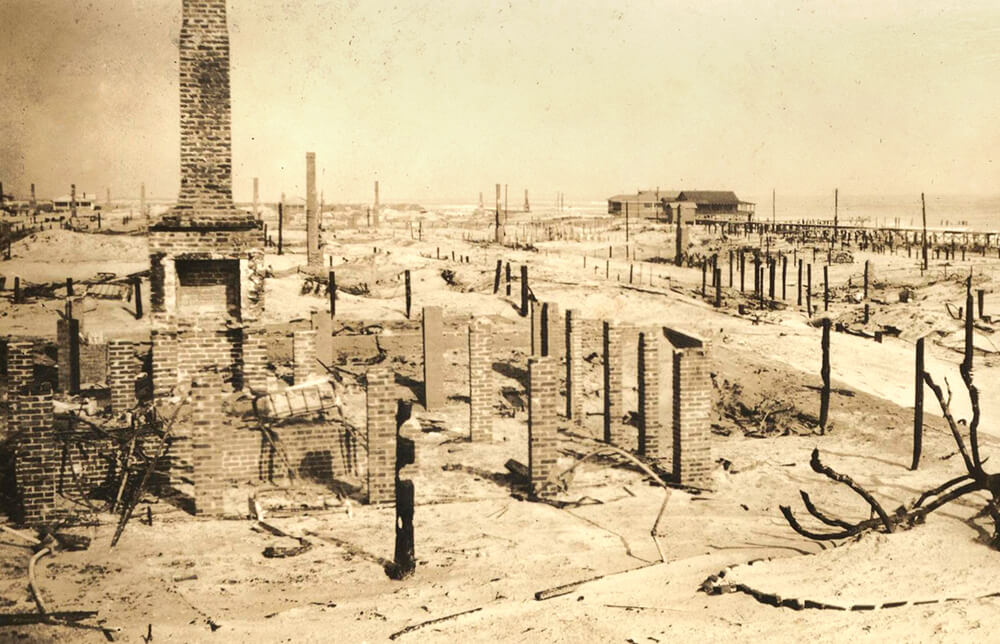 In the 1930s, many of the houses in Wrightsville Beach were wood-frame cottages built close together, which meant that the flames spread quickly. Ultimately, more than 100 buildings were reduced to chimneys and ashes. photograph by Wrightsville Beach Museum of History: Bill Creasy Collection

“If you look at the history of Wrightsville Beach, you have these calamities like the storm in 1899 and Hurricane Hazel,” says Madeline Flagler, executive director of the Wrightsville Beach Museum of History. “But after all of them, you see a surge of development. This happened in the middle of the Depression. The hotel was never rebuilt, but it set some of the development in motion after World War II.”

At the time, Ennis was 26 years old and a year-round resident of Wrightsville Beach, Robinson says. He worked as a carpenter and handyman, and his family owned a fishing party boat. “He was a jack-of-all-trades,” Robinson says.

He may have seen the smoke billowing out of the Kitty Cottage, a boardinghouse that sat next door to the Oceanic Hotel, around 12:30 p.m. on January 28, 1934. The cause of the fire is still up for debate. Some say it started with a cigarette left unattended during a card game. Others say an iron was to blame. But Flagler says a kitchen fire at Kitty Cottage likely set things off.

The fire burned for three hours, leaving little of the north side of the island except ash.

A bucket brigade from the beach to the cottage was set up, but the cold January wind fanned the flames, pushing them north toward the hotel. The smoke was so thick that it could be seen in neighboring counties. Soon the Oceanic was engulfed, and flames moved to the cottages that dotted the north end of the beach. Fortunately, in the quiet of the off-season, the hotel and many cottages were empty, and no one was hurt.

Across the Intracoastal Waterway, Jane Rhett Fox could see the smoke, according to an oral history she gave to the Wrightsville Beach Museum. Her family had just arrived home from church. They filled their plates with Sunday dinner and went upstairs to watch the fire from the second-floor windows.

“The family set chairs around the east-facing windows and sat down to eat from the plates on their laps as they watched the billowing smoke from the fire that was engulfing the north end of the beach,” Fox told the museum.

Wilmington Morning Star editor Lamont Smith — who would later give reporter David Brinkley his first news job — had a pilot fly him over the fire.

Smith’s description — written with flair — paints a picture of the damage: “The dread god of fire tramped over the northern extension of Wrightsville Beach this afternoon … When at last, his saga of destruction done, he folded up his wings and soared away, hundreds of cottages lay in smoldering ruins; at least a third of the popular resort was ashy waste, and scores of year-round residents were destitute.”

The Wilmington Fire Department tried to respond, but there was no drawbridge, only a trolley trestle. Trolleys, with passenger and flat cars to haul tourists, luggage, and supplies, were the only way to reach the island. Firefighters loaded an engine onto one of the flat cars only to watch it get stuck in the sand once it reached the hotel because there were no paved roads on Wrightsville Beach.

Bill Creasy was 6 years old when he watched his family’s summer home burn.

“You could feel the heat,” he told Wrightsville Beach Magazine in 2010. “When the wind would blow, it would blow a breath of hot air at you.”

The fire burned for three hours, leaving little of the north side of the island except ash.

“Chimneys were still standing and old iron beds,” Creasy recalled. “There were iron beds everywhere. The mattresses were gone, just the bed frames.”

A year later, a two-lane drawbridge for cars was built, and by 1940, Waynick Boulevard — which ran along the old trolley route — was paved, allowing cars to drive on the island. Development followed with help from the federal Civil Works Administration and, later, the economic boom after World War II.

The Wrightsville Beach that burned is a distant memory now. Wood-frame cottages have been replaced by million-dollar summer homes. A Mexican restaurant is now located where the Oceanic Hotel once stood. All that remains of the era is the odd intersection where Causeway Drive makes a sharp turn to become North Lumina Avenue. That was where the trolley used to stop for the Oceanic, and where the notes from a piano might once have accompanied a fire.