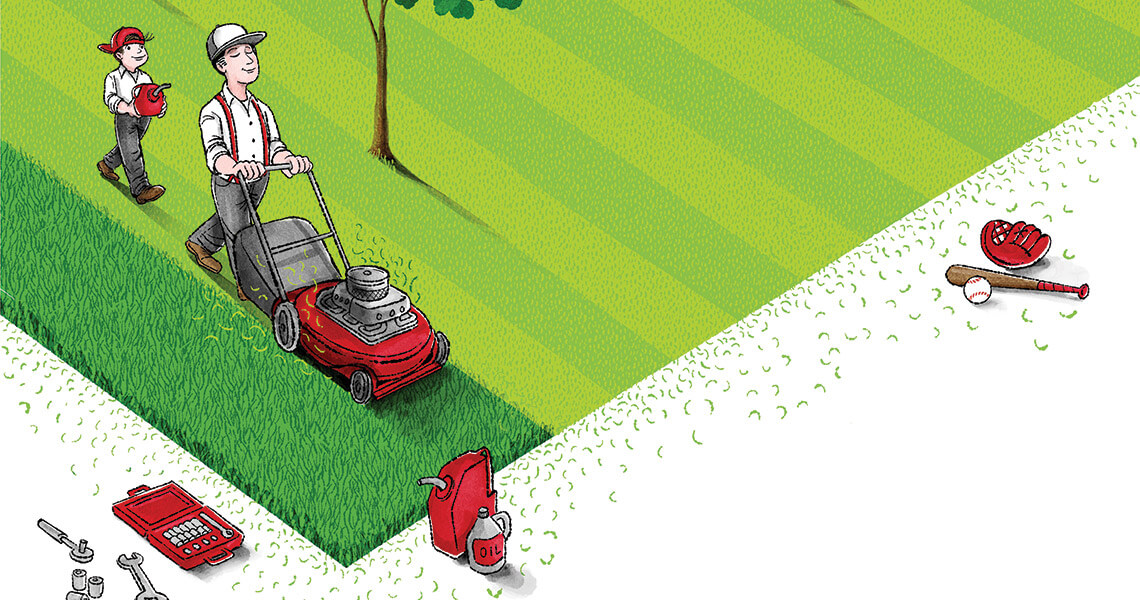 Weather depending, the first mowing in my corner of North Carolina tends to be some afternoon between the ACC basketball tournament and the NCAA regional finals. In the High Country, it might only have been this past weekend. No matter. We’re there now. We’ve smelled true spring. There are plenty of signal scents out there — salt air, ribs on a grill, the pennies-on-the-tongue charge in the air before a thunderstorm — but none equals those that arrive with that first mowed lawn. None carries as much meaning, either. Salt air says that you’ve made it to the beach, and ribs on the grill says that your afternoon is about to get very, very good. But a first mowing means that winter’s truly behind us. It means that summer’s coming. And, ideally, it means a simple job done well.

If you’re like me, the smell isn’t just the wet green of cut grass. It’s also the gas-oil mix that my dad used to put in our old walk-behind Lawn-Boy two-cycle mower so many years ago. Don’t get me wrong — cut grass alone is terrific. It’s Little League and garden parties and sometimes the cool diagonal stripes running across a front lawn and probably also that landscaping business I ran for a while in high school. The gas-oil mix, though, is my dad through and through — and it’s me, in uncharted territory, at 13 years old.

Dads aren’t mysteries at all. I know this now. But when I was 13, my dad was something of a cipher to me: my friend, yes, and somebody I looked up to without question, but also a person, I was coming to understand, possessed of an inner life, of questions beyond his knowing. I was also noticing that he was a person who enjoyed and sought out straightforward work, work that revealed mystery to be something less like an unbreakable code and more like a puzzle. If his 1963 Volkswagen Beetle wouldn’t crank, he would tap the starter with the little hammer he kept in the glove box. If the dryer broke, he took the drum out and messed with the motor. If the mower wouldn’t start, or if the self-drive wouldn’t engage, he’d strip that thing down to the deck and build it back again. When I wasn’t behaving like I was 13 — moonily listening to my Walkman and dreaming of slow-dancing at summer camp — I was his assistant. He’d holler scalpel!, and I’d hand him metric sockets instead of whatever the other system is. Fractions, I think the professionals call it. 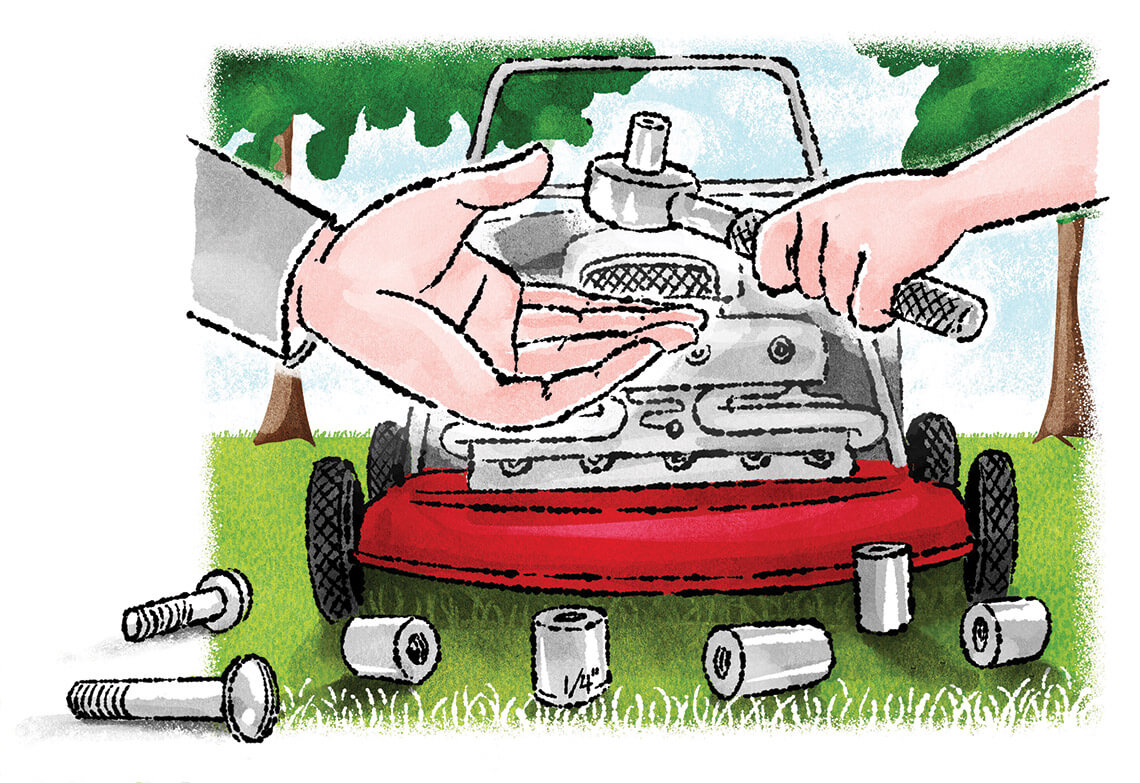 So maybe the smell I’m trying to describe is Disassembled Mower. Maybe it’s Reasonably Confident Father. Maybe it’s Guy Answering Spiritual Questions Via Carburetor Repair. All I know is that the smell of cut grass is forever wrapped up in the smell of engine parts and the cement of our carport floor and the cloth diapers turned shop rags and the goop, named Goop, that my dad used to degrease his hands.

It might also be the smell of finally crossing some line. That spring when I was 13, once we got the mower put back together one more time, my dad asked if I wanted to have a go at the yard. Reader, my own older son will be 13 next summer. Can I imagine handing him a gas-powered upside-down sword-helicopter on wheels? Not at all. But my dad made sure I had my good hiking boots on, told me to be careful and walk slowly, and that was it. The smells: Of the little push-primer on the side of the engine. Of past years’ cut grass, rotted to something like iron and molded permanently to the underside of the housing. Of the gas-oil mix, poured from the red can. Of our yard, cut by suddenly-old-enough me. I had mysteries of my own to parse now, making sure the edge of the next outbound swath ran right against the previous inbound one. I liked it. I understood it right away. Being 13, I already knew, was complicated. Mowing wasn’t — and, like my dad, I would come to need more jobs like that, solvable puzzles in an increasingly unsolvable world.

Last spring, right about this time of year, my younger son helped me replace the gas tank on our mower. Squirrels had chewed a hole in it, and the as-seen-on-TV waterproof tape that I’d bought as a stopgap wasn’t terribly gasoline-proof. I got concerned about fire. I don’t really understand engines, but the YouTube videos made it seem possible. So I looked up the model number, and the new tank came in the mail, and because the universe, apparently, also wants its outbound lines to line up perfectly with its inbound ones, I found myself in our driveway with my own son, asking him for sockets. The deeper one, I said. The thingy. The one made for spark plugs.

My engine is the kind that wants its gas and oil separate, so our mower doesn’t quite smell like my dad’s. I still get a rush from starting it, though, tumbling back in time to being a kid, and then to being whatever comes after. No, I don’t love mowing the lawn every time. I didn’t love it then, either. But I now know the low-grade triumph that my dad must have felt laying all those nuts and bolts out on shop cloths: The thing won’t start, the cord broke, the tank leaks. Let’s figure it out, this thing that can, in fact, be figured out. Let’s fix it. Smallish person nearby who wants to hang out with you, keep you company, see how things work? Even better.

We fixed it, my son and I. Took it apart, put it back together, and it started. He cheered when the motor caught. We fix other things, too, because I learned to try: the garbage disposal, the busted plate glass in the door. Those things don’t smell like hope, though, or like renewal. Those things don’t smell like a belief system neatly packaged as a lawn mower. Every time I start a mower, or smell one — every time the season comes around again — I think of my dad, that carport, that day, all those days. And now, having survived 13, and having mowed a few lawns since then, I think of these days, of all our current projects, of my own boys handing me wrong tools, too.