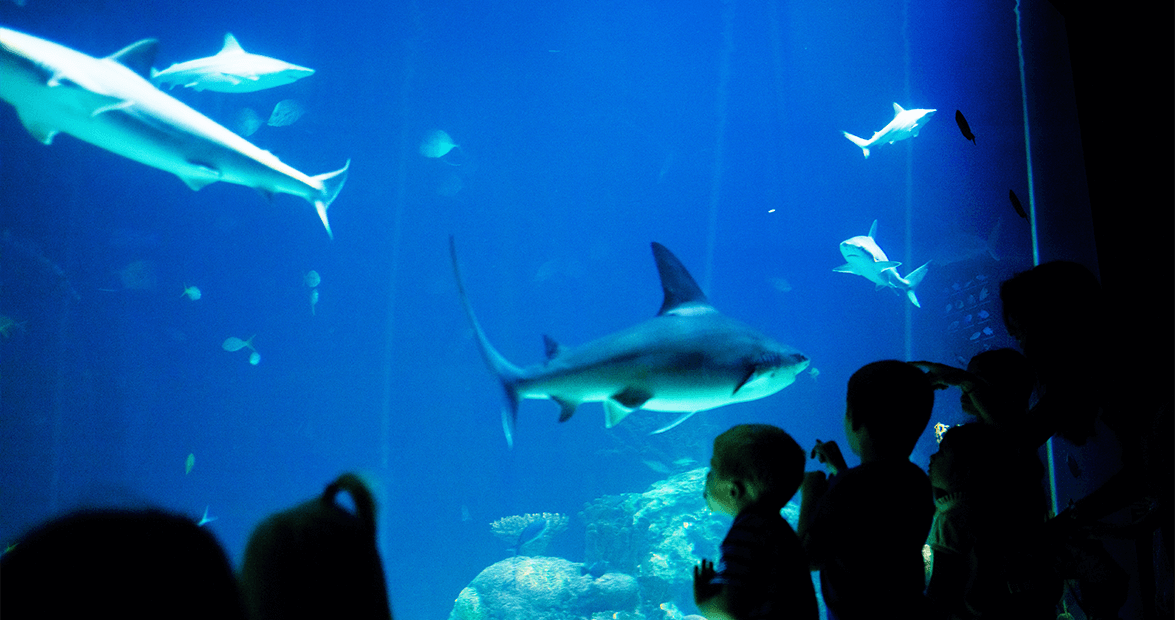 Carmen Murray is giving four young penguins a swimming lesson. Actually, the cuties are holding their own on the swimming end; it’s the exiting portion that’s giving them trouble. They’re learning to clamber from the pool onto a gridded ramp. There’s a little bit of tough love, a little bit of “good girl, good boy” encouragement, and a lot of web-footed struggle and flipper-flapping involved. When Raven makes it, the clapping is especially enthusiastic. Most penguins are born in pairs, so, like twins, they have a built-in pal. But Raven is a loner. When she gets large enough, self-confident enough, and skilled enough, she’ll waddle herself into the Greensboro Science Center’s (GSC) penguin herd, which isn’t so different from a fifth-grade cafeteria. Not quite dog-eat-dog, but everybody’s eyeballing everyone else before the pizza runs out.

The penguins share the most-popular attraction superlative at GSC’s aquarium, North Carolina’s first inland aquarium at this remarkable attraction that’s a three-in-one destination of zoo, aquarium, and museum. Beside these endangered penguins from Africa live a pair of swimming, fishing cats — Asian Fishing Cats, to be more specific — endangered felines from Southeast Asia who will swim for eats. Part of GSC’s mission is to promote endangered animals, and it’s hoped that this male and female will breed, and prolong the species. But you can’t hurry love, as the song goes, so the older, wiser female, Tallulah, sits high on a boulder, ruling the roost, so to speak. She’ll gradually accept younger, less mature male, Mako, prowling beneath her. Love will have its way, but only when the female has her say. “Like most marriages, right?” jokes Glenn Dobrogosz, executive director of the Greensboro Science Center.

Nearby are the also-rare Asian Small-Clawed Otters. “Birth announcements” written on Lucite panels announce five new arrivals who, because they were born on Veterans Day, boast patriotic names such as Betsy (Ross), Quincy, and Abigail. Linger and learn more in the SciPods, where exhibits answer questions for visitors who want to do more than just watch. The “Hungry Games” SciPod includes everything you want to know about the eating habits of fish, plus artifacts — teeth, shells — along with a mounted tablet computer if you want to delve even further into the topic. So many museumgoers today, especially children, won’t pause to read signage. But they’ll pause to interact with technology. Hence the tablets.

Within another SciPod is a window on the entire filtration system for the aquarium, a four-part process that involves a lot of bacteria (good guys, in this scenario) and ozone, a toxic gas that zaps any leftover bad guys. Close to the maze of innumerable pipes are stacked boxes of a product called “Instant Ocean,” otherwise known as salt. Some $50,000 a year is spent on keeping the saltwater animals and fish in their happy place. 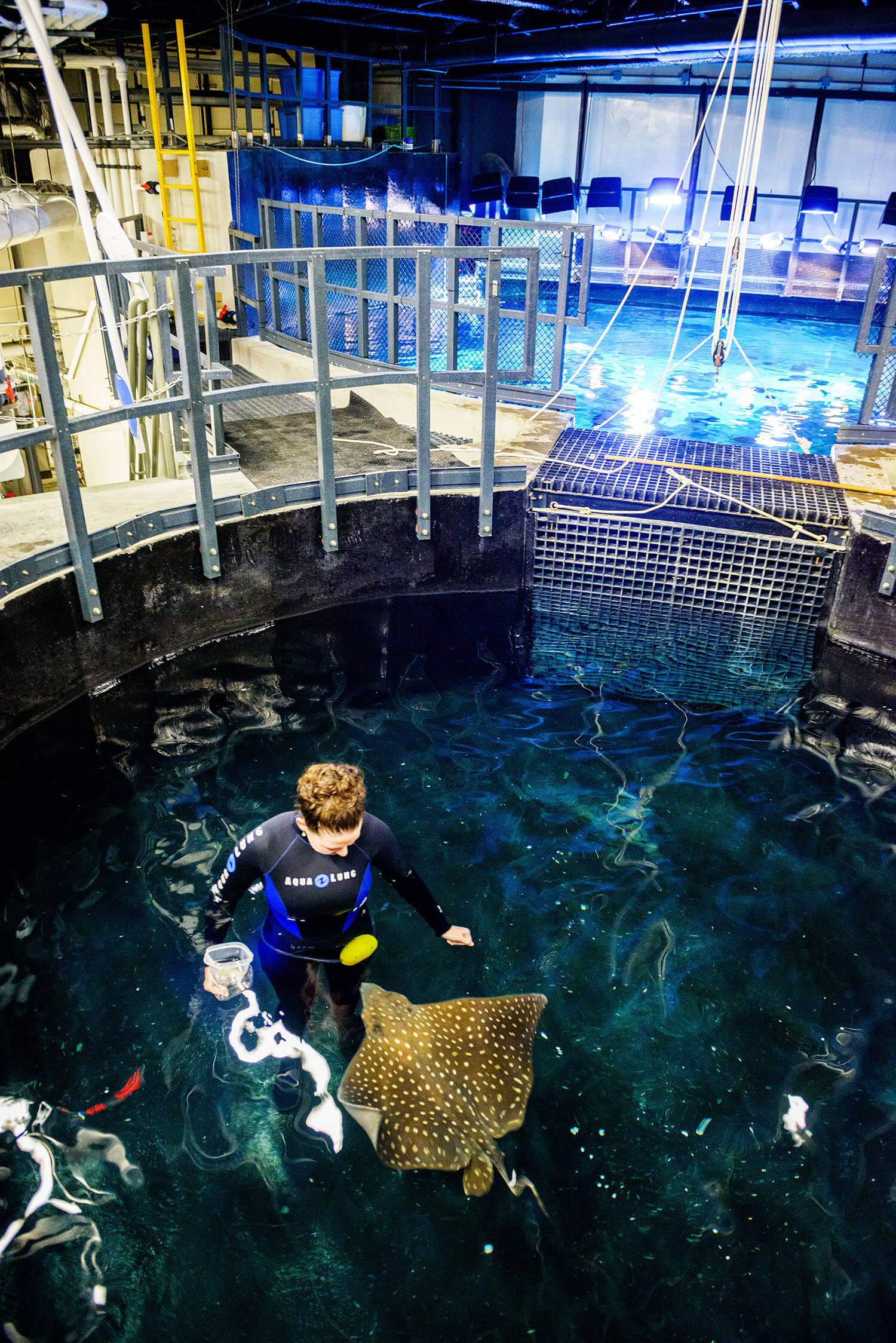 Contrary to the images of your imagination, skates and mantas aren’t out to sting you to death. “They like people,” Dobrogosz assures. A two-finger dip into their pool — the most-visited interactive exhibit at GSC — brings playful rays waffling, floating, flapping toward the motion, allowing you to stroke their velvety backs. Behind you is the Shark Reef, a habitat and tank that includes carnivorous fish along with herbivorous fish, plus mammals — shy, yellowish tamarins — in the treetops. Why don’t they devour each other? Like humans, they’ll go with whatever’s easiest to eat, and during acclimation,  they grow accustomed to being fed. Why hoe a row when you can open the fridge? Still, cohabitation has its limits: The 14-foot anaconda, while definitely an Amazonian native, gets his own pool and rocks and logs. And a frozen rabbit every two weeks.

Dobrogosz began at GSC in 2004 and, in an era of enormous financial challenge, has overseen expansions of nearly miraculous proportions in what began as a cinder block building of typical science museum exhibits and a petting zoo. He taps the seven-inch thick, $150,000 piece of glass that separates him from a tank full of seven sharks, five rays, three moray eels, and 380 fish, and asks, “Where else can you get seven inches from a shark?” A dozen black rubber scuba suits dangle on a rack, and one tank tech suits up to descend into the 90,000-gallon saltwater tank. Every day at 11 a.m., a member of the dive team gets up close and personal with a shark or two, and fields questions from the gawkers and gapers. But the diver doesn’t look overly worried. There’s a reason sharks aren’t chomping into folks in Maine waters. The chillier the ocean, the less hungry they are, and water temps at GSC are cool enough to quell their predatory natures. And, besides the penguins, which exhibit gets the most attention? The sharks. People love the cute and cuddly, but also the dangerous and deadly. Opposites do attract.

GSC knows that, deep down, you want to know what it feels like to be Robert Peary or Dorothy Gale, so clear booths in the hallways will blast you with frigid, 75-mile-per-hour winds of the North Pole, or the treacherous 78-m.p.h. swirls of a Kansas tornado. Or stick to the safety of flattening a penny, taking a 3-D photograph, or snacking at Meerkat Café. After you’ve eaten, you can see what’s going on in your stomach in the Health Quest area, where preserved humans, somehow not a bit gory, are displayed to illustrate our muscular, circulatory, intestinal, and other bodily systems. Similarly, the End of Life area, an intimate nook nearby, is more uplifting than mournful. After all, death is a natural bodily function, as well. Hospice partnered with GSC to create the exhibit, and a desk and posting board permits visitors to leave notes for friends and family who’ve died. And for the occasional idol, too: a scrawled message laments the death of Dean Smith.

A gibbon named Duke is in extreme show-off mode outside, executing watch-me twirls that wouldn’t be out of place in an Olympic skating competition. He’s probably trying to compete with what’s just beyond his habitat, the attraction that’s been drawing rubberneckers from nearby Lawndale Drive well before its opening day, April 15. Dangling, suspended, and engineered by Challenge Design Innovations out of Newland, is SkyWild. Seven “arms” of physically challenging overhead courses, divided into beginner, intermediate, and advanced levels, mimic animal habitats and movements. Here is a series of horizontal net circles, large enough to accommodate only one person, which said person will have to navigate to reach the next destination. Here is a series of vertical panels holey as Swiss cheese, which requires careful placement of hands and feet to traverse. A dozen knotted ropes will require you to travel hand-over-hand, just like Duke the frisky gibbon. A zip line mimics a butterfly’s flight; the Chameleon Climb will turn your face red by the time you complete it. But don’t worry: Every participant is securely belayed. Misstep, and you’ll only fall 18 inches before a park guide sets you back on that rickety bridge with intentional gaps. This is a workout with a view, an overhead perspective on the tigers and wolves pacing their lairs, and the anteater snuffling up his daily 30,000 insects. “Themed animal adaptation” and “humans on exhibit” is how Dobrogosz describes this outdoor experience. Don’t forget to wave to North Carolina’s only red panda, and the skulking fossa, a long-tailed creature that doesn’t play well with others. Fortunately, his neighbors, the beautiful ring-tailed and red ruffed lemurs, are safe in their canvas hammocks and hollow pipes.

Big plans are underway in offices marked “Think Tank,” where an innovation committee is planning what’s known in the museum trade as a total immersion experience and will be like nothing else available in the state. Here’s a clue: Beneath the bridge that crosses into Wunderworld, where all the reptiles are housed, a river of slithering snakes will be squirming menacingly below your feet. In Indiana Bones’ office, maps will speak, books will open to explain, and pictures on the wall will talk, much like the magically animated walls and photographs at Harry Potter’s alma mater, Hogwarts. A dinosaur egg will hatch in front of your eyes, but — wait. A volcano just erupted behind me. Later, gator. Not to worry, though. All threats will be computer-generated. 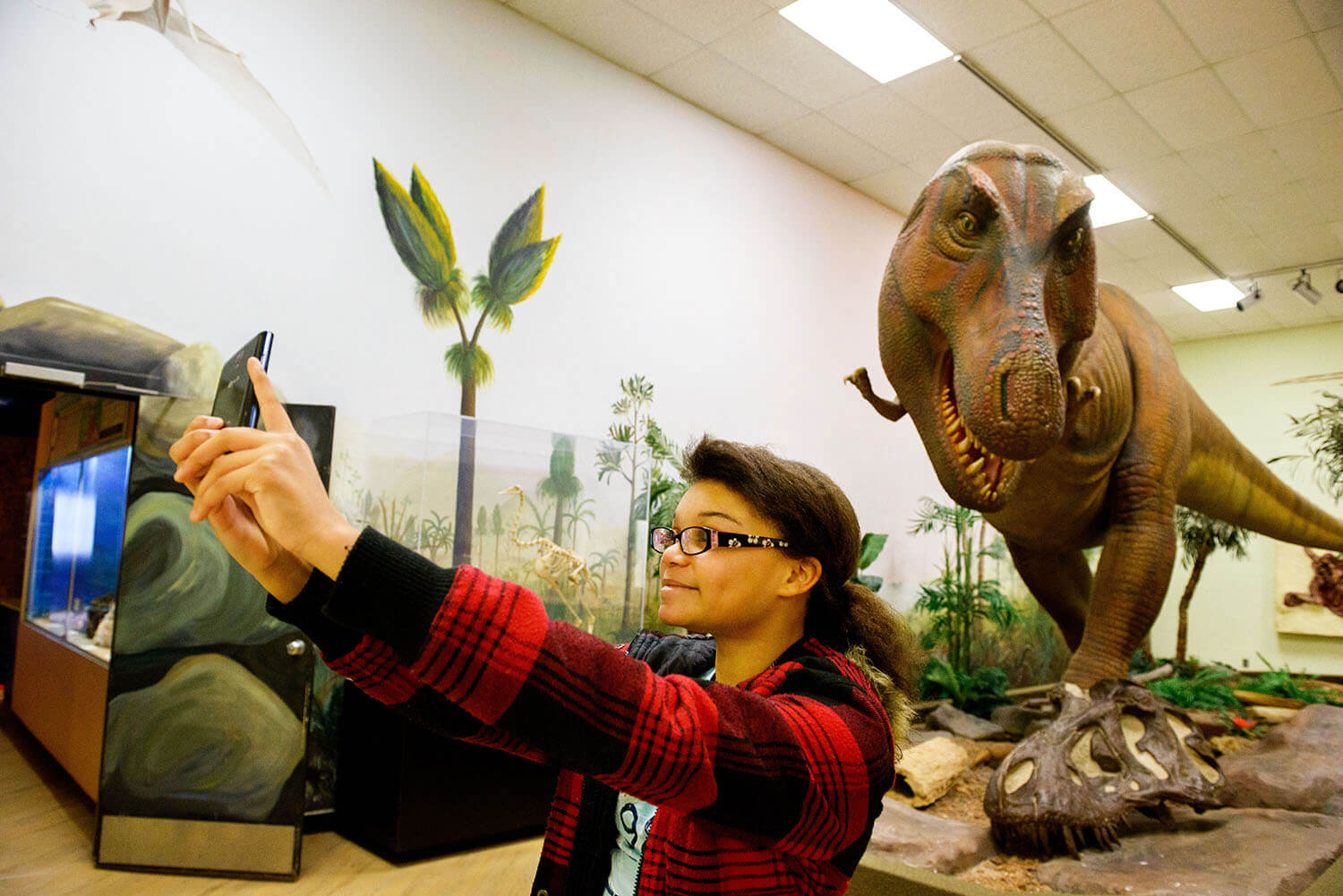 A visitor snaps a selfie with a prehistoric stomper. photograph by Joey Seawell

Meanwhile, the sharks are still circling, still slitty-eyed, and why not? It’s worked for them for millions of years. Evolving is overrated. No wonder this darkened room with its lit habitats and tanks is booked for office bashes, receptions, wedding ceremonies, and throwdowns of every ilk — it’s not your typical party venue. Dance moves and rock bands are welcome in the spacious foyer just off the aquarium. Because thumping beats annoy the sharks. And they’re not your typical neighbors.