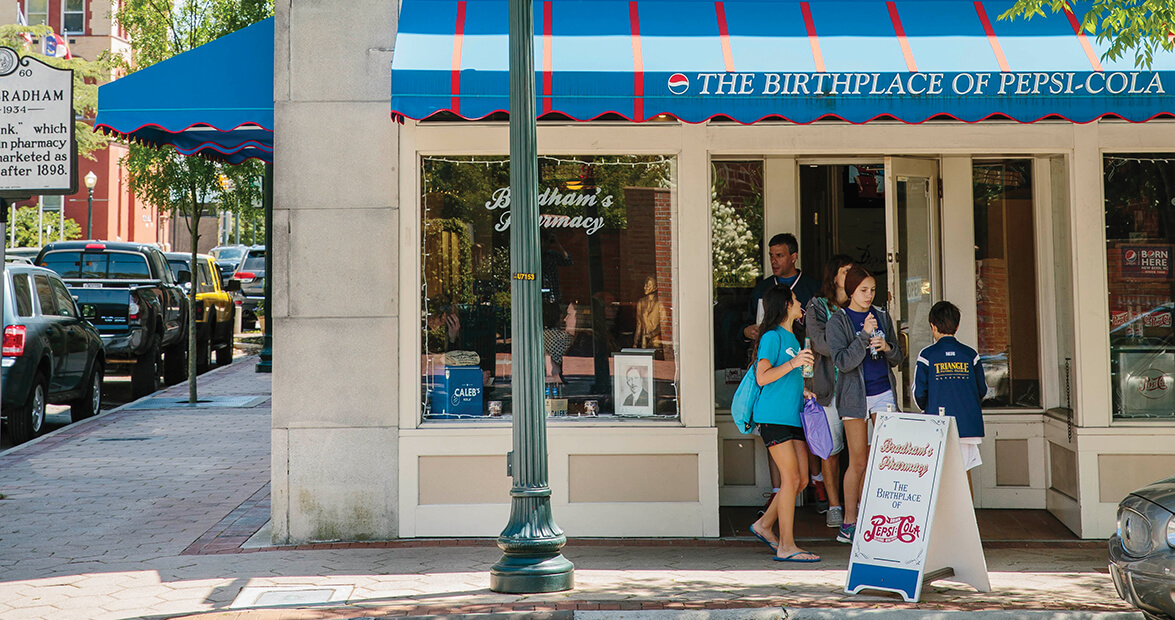 At room temperature, Pepsi hisses and foams way more than when it’s cold. That’s one reason why the 5-year-old is pouring wee shots of warm cola into jelly jars for his Raggedy Andy and Leo Lion.

The other reason he’s serving up barely two fingers of Pepsi for Andy and Leo? Because that’s how the barkeep in the Western playing on TV in the background pours his drinks. Like in the Western, tension’s brewing in the living-room saloon. The rotgut — a k a Pepsi — has been flowing all afternoon, and the cowboys at the bar are looking for a fight.

As the boy and the stuffed toys exchange tense stares over the footstool that serves as a bar, a voice calls from the next room. “Do you want an ice cube for your Pepsi?”

OK, yes, the boy was me. I was the barkeep knocking back shots of Pepsi with Andy and Leo. I even made a face like the TV cowboys did as they drank shots of real fake whiskey.

My “Shoot-Out in the OK Living Room” from the early ’70s is one of my earliest memories of drinking Pepsi. The soft drink was a ubiquitous presence in our home, a part of every major and minor memory. The moon landing: Mom, Dad, and my uncles gathered in the living room, bottles of Pepsi on the coffee table. New Year’s Eve: I toasted with a glass of Pepsi as Guy Lombardo and his orchestra ushered in the new year. Easter/Thanksgiving/Christmas dinner: Ham/turkey/ham … and Pepsi.

By the ’80s, Pepsi’s presence in our fridge was a given. Not to brag, but friends from Kool-Aid and nothing-stronger-than-chocolate-milk households coveted invitations to Saturday night sleepovers at my house because of the legendary Triple-P Sunday brunch: leftover pizza, stale popcorn, and cold Pepsi. 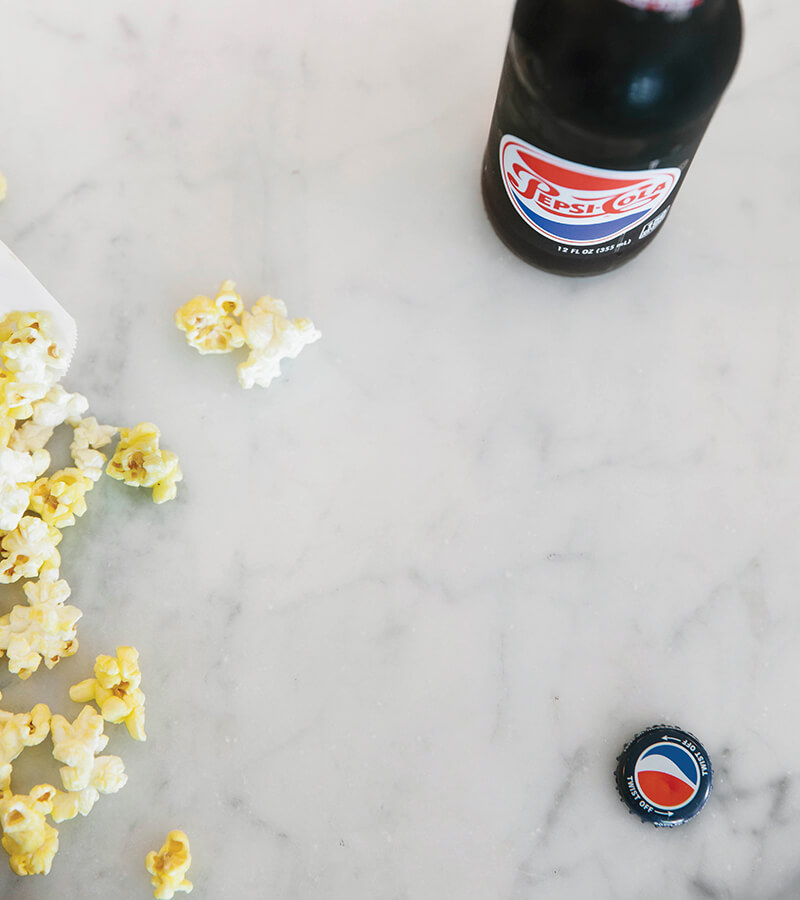 When Caleb Bradham invented Pepsi-Cola in New Bern, he didn’t know the soft drink would be an essential part of, ahem, a good breakfast: Pepsi and popcorn. photograph by Geoff Wood

However, it wasn’t all fizz and fun for soda fans in the ’70s and ’80s — the years of the Cola Wars: the Pepsi Challenge blind taste tests, Michael Jackson vs. Mean Joe Greene, and an all-out assault on taste buds with exotic concoctions like lemon-flavored Pepsi Light, New Coke, and Crystal Pepsi.

My family dabbled in the latest flavors of the day, although, out of principle, we avoided Tab — which was more of a saccharine accessory than a soft drink. We always came back to the real thing, though. (Not to be confused with “The Real Thing.”) No soda tasted as good as Pepsi. No soda worked as well in recipes that called for cola, including my mom’s Pepsi-and-brown-sugar glaze that turned the rind of a ham into a foodstuff akin to chewy meat candy.

And it was all thanks to a man with a knack for creating delicious recipes: New Bern’s Caleb Bradham.

The inventor of Pepsi-Cola, Bradham wasn’t a mad scientist. But he was a 19th-century pharmacist, so his drugstore in downtown New Bern had the requisite tools of the trade: mortar and pestle, a scale, a beaker or two. But there were no buzzing Tesla coils or brains in jars — at least, none of that is mentioned in his official biography. 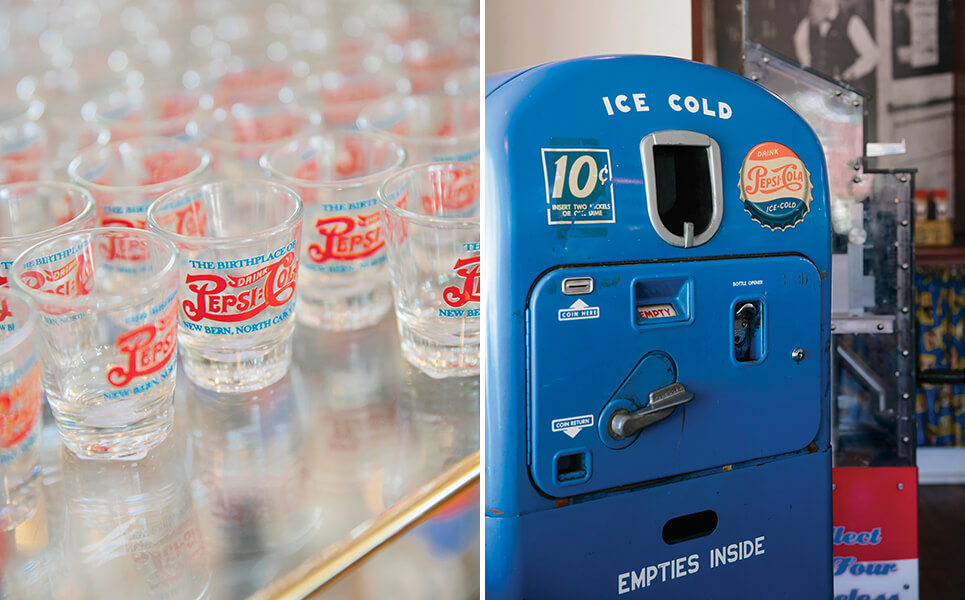 “Pepsi makes a party” was the soft drink’s slogan in 1960. Everyone, grab a glass. photograph by Geoff Wood

Bradham’s wild experiments were more on par with Julia Child in her kitchen than with Dr. Frankenstein in his lab; his workbench likely smelled more of fruits and spices than of chemicals. Certainly, there was no “It’s alive!” moment for Bradham, although he might have exclaimed “It’s a cola!” in 1893, when he first tasted the concoction he would later dub “Brad’s Drink.”

To a Pepsi fan, the thought of his discovery is thrilling: Bradham standing in his pharmacy, stirring carbonated water into a caramel-and-sugar mixture, watching the fizz and foam erupt. In that moment, Bradham created a 20th-century icon that transformed the taste buds of people around the world.

There’s no way Bradham could have foreseen that his Pepsi would go from his pharmacy to grocery store shelves to a living-room saloon within a mere century. But maybe he did. Maybe Bradham could see the future in those dancing bubbles of carbonation. Perhaps he could see that boy pour a shot of warm Pepsi into a jar, take a swig, and proclaim, “Good stuff.” Because in all that fizz, there’s a lot of imagination.