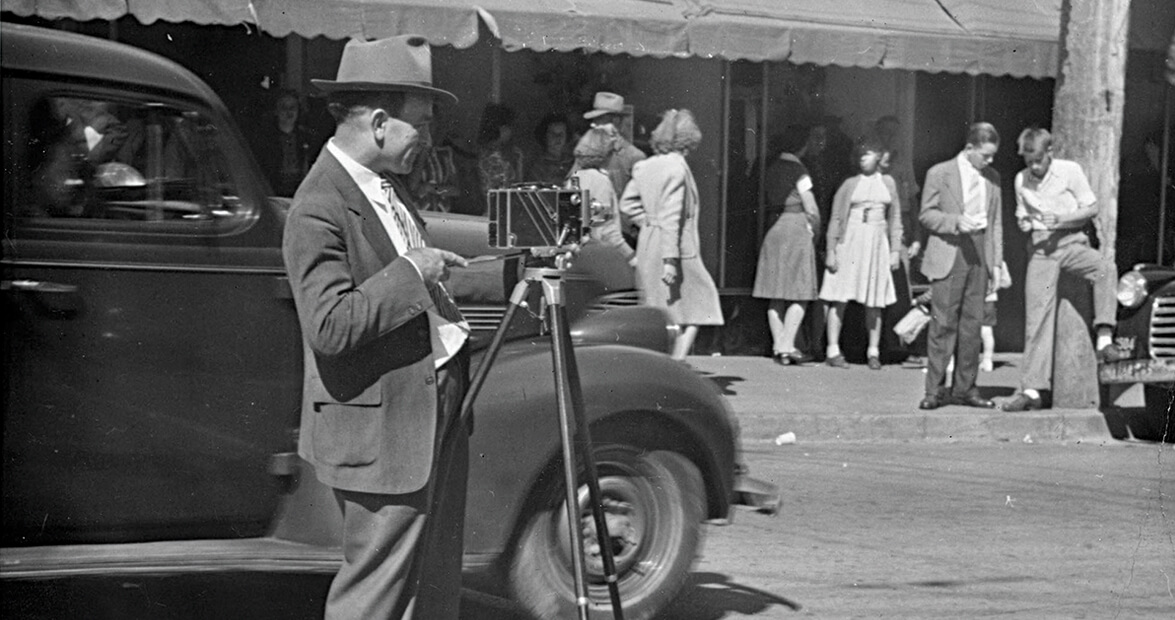 When the Carolina Theater in uptown Lexington caught fire shortly before Christmas in 1945, H. Lee Waters was there with his camera. His eye to the viewfinder and his finger on the shutter release, Waters captured the flames devouring the two-story building, the firefighters futilely spraying it with water, and the solemn onlookers who lined South Main Street to watch it burn. Later, when the theater was rebuilt, he was there, once again, to document its revival.

One of North Carolina’s most famous photographers and documentary filmmakers, Waters had both an artistic eye and a benevolent soul. He photographed impromptu street scenes. And on the second floor of 118½ South Main Street, he and his wife ran a portrait studio. There, he seemed to reach through the lens, discover his subject’s essence, and forever preserve it on film.

A petite, religious man with a soft voice, Waters was a daredevil and a showman. He rode a Honda motorcycle — in the early years, without a helmet — and hosted movie nights and talent shows in the family’s backyard.

“He had a way of getting to people,” says his daughter Mary Spaulding. “And he had a great rapport with kids. The kids weren’t posing, they were reacting to him. He brought out the best of their personalities.”

At the Davidson County Historical Museum in Lexington, much of the first floor is devoted to Waters’s black-and-white work, plus two of his cameras, several of his date books, and some of his darkroom notes. His range took him far afield, from posed portraits of brides and soldiers (his wife did the color tinting), to a gathering at the Owens Temple Church of God in Christ, to orphan boys milking cows at the Junior Order of American Mechanics Home. He photographed the construction of High Rock Lake Dam in 1926, and in the 1940s, a fleet of buses operated by the Carolina Coach Company carrying soldiers off to war. 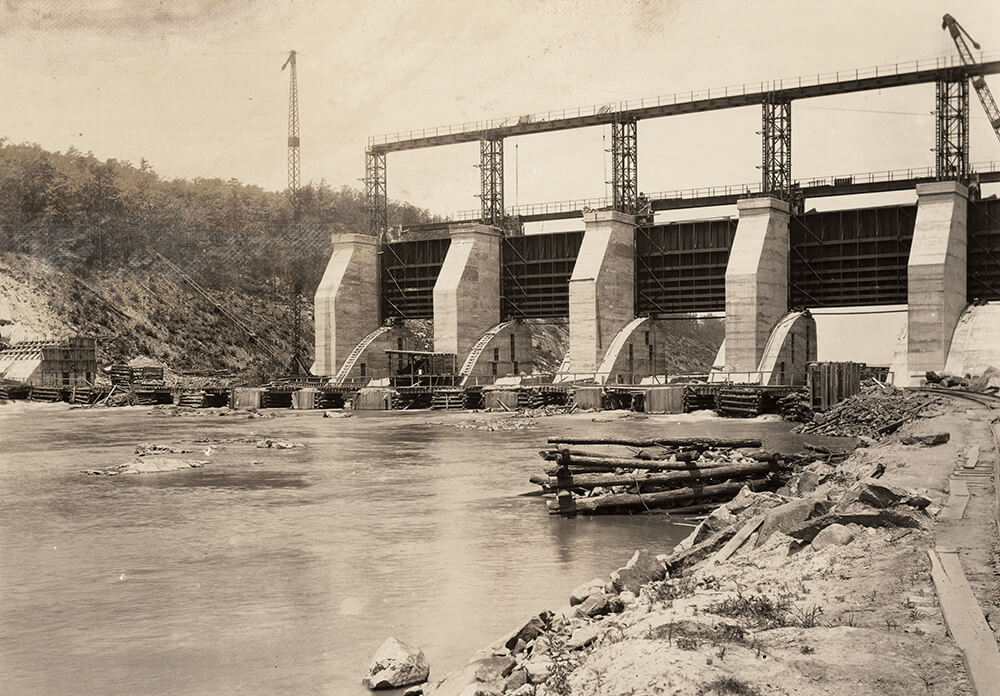 “He was very curious, prolific, and enterprising,” says Catherine Hoffmann, the museum’s curator.

Because Waters approached the world so genuinely, his work never feels manipulative. Outside a movie theater in Lexington in the 1950s, he happened upon two lines of children waiting to get in to see a matinee: one with black patrons, one with whites. “That was accidental,” Hoffmann says. “He didn’t go down to document segregation.”

“To him, race didn’t matter,” Spaulding says. “He was invited to African-American parties and reunions and weddings. This was in the 1930s, ’40s, and ’50s. That was unheard of at the time.” 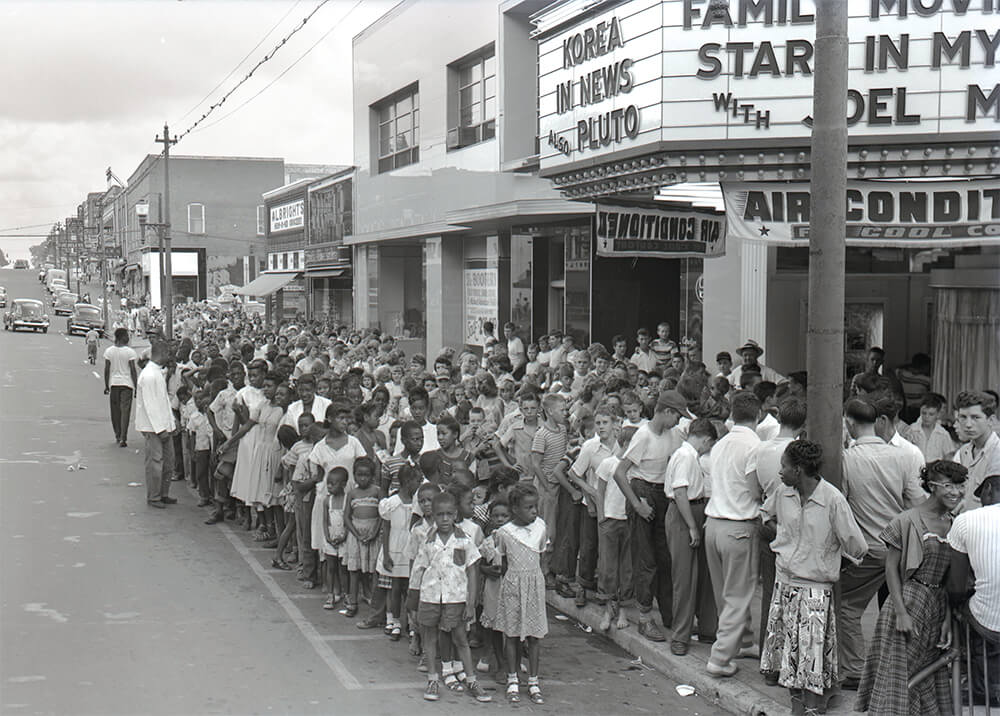 When the Depression hit, fewer people could afford to have their portraits taken. So to supplement his income, starting in 1936, Waters took to the road with a 16-millimeter movie camera. He spent the next six years making 252 silent films in more than 110 towns in North Carolina, Tennessee, and Virginia.

He would go home, develop the footage, and then return to those towns to show the movies at a local theater, billing the events as “Movies of Local People.” (The Waters family donated many of the movies to Duke University Libraries, which has digitized them for online viewing.)

“People had never seen themselves onscreen before,” says Tom Whiteside, a documentary filmmaker who was friends with Waters. “These movies had a very unique form. They were shot very rapidly. And everybody gets a little screen time, because the more people on the screen, the more people would come to the show.”

Waters had both an artistic eye and a benevolent soul.

By today’s standards of scripted moviemaking, the films seem to lack a narrative. But a closer viewing reveals hundreds of miniature stories that unfold in a few seconds: In Troy, a football game on a dirt playground depicts the joys of afternoon recess. In Smithfield, a doctor wraps a man’s sprained ankle. In Siler City, a young girl plays with a yo-yo, and African-American kids get out of school. In Durham, Waters documented a shift change at the Liggett & Myers cigarette factory. As a worker leaves the building, he lights a match by flicking it against a brick wall.

In 1941 in Kannapolis, Waters shot one of his rare color movies: marching bands in pine green uniforms, coltish boys galloping in the schoolyard. The movie is now part of the Library of Congress’s National Film Registry.

Waters stopped his one-man tour in 1942, when Mary, his third child, was born. “He promised my mother he would not be on the road,” Spaulding says. But he continued to make movies — home versions — that included hundreds of hours of footage of beach vacations and life at the family’s house on West Side Drive. And Waters often ordered popular films — mostly cartoons and comedies — on large reels and hosted movie nights in their backyard. “He served homemade ice cream and popcorn,” Spaulding says. “The whole neighborhood would be there.”

He also emceed children’s talent shows. He provided background music on drums and trumpet, ran the spotlight, and played old 78s on a Victrola. “He’d charge a nickel to get in,” Spaulding says. “And then after the show my mom would give the kids their nickel back.”

Waters died in 1997 at age 95. His contributions to the historical record of these small towns and their people can’t be overstated. Younger generations are now returning to these films to redeem parts of their past, once thought lost.

Yet when Waters made these movies, he was thinking less of the future than he was living fully in the moment. “He was a renaissance man,” Spaulding says. “And he was so much fun.”