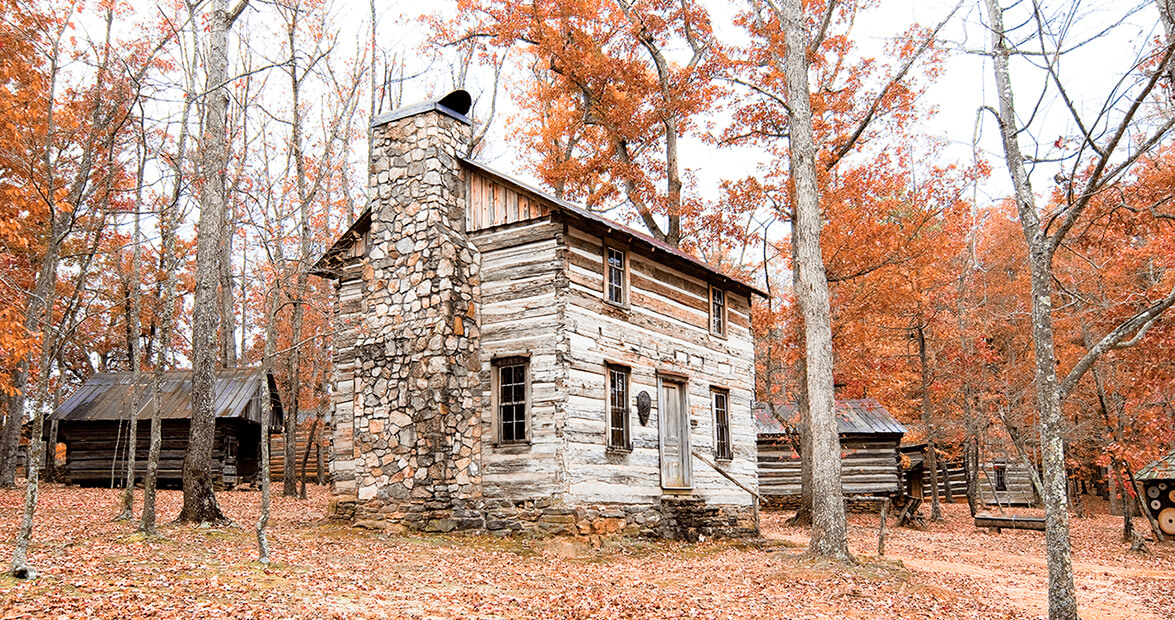 There are no people here. Only cabins. Rows and lines of them zigzagging across the land like an Etch A Sketch drawing. Scores of logs stacked on top of each other. There’s a tavern. Tobacco barn. Water well. Doctor’s office. Post office. School. Teeter-totters. Moonshine still. Cotton gin. Church. General store. Print shop.

A village preserved in its entirety. A ghost town from the 1800s, right here in the hills of Hickory.

Bob Hart has been going and going for more than 40 years now on this land. He’s gathered these 92 buildings from the surrounding counties and moved them to this 200-acre haven. He’s stuffed the cabins with beds, chairs, food, dresses, shoes, brooms, medicine. Each structure represents a part of this village he calls Hart Square.

Hart didn’t mean to create a village. It just happened. A friend thought his cabin would look good on Hart’s land, so he sold it to Hart for $100. Then people gave him more cabins. And once he had the cabins, he had to decorate them with original furniture.

After a while, Hart started spotting cabins around the county from his airplane. He approached strangers. “Can I buy your cabin?” he asked. Sometimes people said no, so he waited. Everyone knew Hart would take better care of their old cabins than they could. He’s a doctor, after all.

Everyone eventually tries to cheat death. We have cleanses, lotions, and potions for it. After others die, we take their organs, so we can live just a little longer. We go to great lengths to preserve our lifeless bodies. We all want to live. Hart understands this desire.

“The love of restoring stuff — it’s almost like resuscitating a person,” he says. “To a doctor, that’s the best.”

So once a year, every fourth Saturday in October, Hart invites about 200 artisans and craftsmen he knows to Hart Square. He sells 3,000 tickets. And the people go to work, ginning cotton, making brooms, spinning clay.

And for a day, there is life in his village.

Hart is 76. He’s a man of medium build, medium height, and big ambition. He works at the village every day from daylight to dusk. He doesn’t have a favorite season. His favorite time is daylight savings time, so he can work even longer. He buys his clothes from flea markets because he destroys them with chain saws and mucks them up so quickly.

When he gets home, he’s so dirty from nailing and sawing and mowing, that his wife, Becky, makes him undress outside. He scrubs himself with a surgery brush and washes his hands with Clorox.

Healing runs in Hart’s family. His grandfather and father were both doctors. But early on, it didn’t seem like Hart would follow their paths. He kept flunking Latin. So his dad sent him to a military academy, and he learned discipline. “If you had good grades, you could go out all weekend in town,” he says. He studied chemistry and biology at Wofford College in Spartanburg, South Carolina, and went on to medical school.

Along the way, he met Becky. They had two boys, and Hart built his reputation as a caring doctor in Hickory.

In the ’60s, Hart bought his 200 acres just outside the city limits to use as a wildlife preserve. He built lakes and made boxes, so wood ducks could lay their eggs safely. A few times a month, he paddled up to the boxes and wrestled black snakes out of the nests. Often, he was too late. The snakes had already devoured the eggs. Sometimes, he got so angry at the snake, he jerked him from the box, paddled to shore, swung the snake by the tail, and whipped it against the tree.

Once Hart moved the first cabin to his land, his phone began ringing. It never really stopped. On weekends and evenings, he traveled around the county to move buildings to his property. He carried a camera and crayons. He walked around the cabins and marked the logs with numbers and letters. He took photos of every wall and corner to be sure he put them back together properly.

When he had the logs and the tin and nails on his land, he stitched everything back together. Sometimes it took him six months. Sometimes it took a year. And today, when you peer into the cabins, you can still see blue crayon marks along the edges of the logs.

Becky stepped in to help, too. She hunted with Hart on Sundays at antiques shows for furniture that matched the time period of each cabin. Rope beds, nursing chairs, dolls made of corn husks — its all there.

“People go to flea markets and say they can’t find anything,” Hart says. “I run out of money in the first aisle and start writing checks.”

Eventually, all the sawing and hammering and roofing took its toll. Hart fell 10 feet off a scaffold. Tore his rotator cuff and biceps tendon. “I think he’s worked over nine lives,” Becky says.

But he didn’t slow down. He kept on.

And in the general store, Hart hung a ham. It’s 30 years old. Hart sprays it with Raid every year to keep the bugs away, to keep it around a little longer.

Christmas, 1969. Hart piled his Cessna 170 with Christmas presents, and he and Becky; their sons, Eric and Keith; and their two dogs took off to South Carolina.

Rain and ice pelted the windows. Eric and Keith huddled together to keep warm. Over Sumter National Forest, the engine sputtered. A few moments later, the air fell silent. The engine failed.

Hart spotted a five-acre field in the distance, and as the Cessna plummeted, he dodged power lines and trees. The plane hit the ground with a crash, and Hart slammed the brakes. The Cessna flipped and skidded several hundred feet, stopping just short of a stand of trees.

Keith dangled upside down in his seat. As the gasoline pooled on the ground, Hart and Becky jerked him free.

This brush with death was nothing compared to what Hart endured later.

In 1974, Hart’s feet began to tingle. Within hours, he couldn’t feel his feet. Couldn’t walk. Becky rushed him to the local hospital. For two weeks, the paralysis crept north. Next, his legs, stomach, chest, arms, brain, eyes, spinal cord. The doctors told Becky they were going to do a tracheotomy, so Hart could breathe. For the first time, the doctor needed help to keep living.

Becky moved Hart to Wake Forest Baptist Medical Center in Winston-Salem. There, a former professor at Harvard University looked at Hart and was reminded of another case he’d seen, one that was reversed with massive doses of steroids. Slowly, the paralysis receded. The doctor called it “post infectious transverse myelitis with optic neuritis.” There’s no way to know how he became infected.

For two years, Hart regained feeling, one section at a time. He sat in his hospital bed and learned to play the banjo. Through the day and night, he picked and plucked his strings and dreamed of the day he could begin working on his cabins again.

This past spring, when the leaves began bursting from tree limbs in bright green clusters, Hart drove around his 200 acres in his golf cart. He stopped just before his covered bridge and walked to the edge of the lake. He spread his arms wide and turned in a circle. “Can you imagine resuscitating this?”

He walked back to his cart, started the engine, and drove across the bridge he’d built.