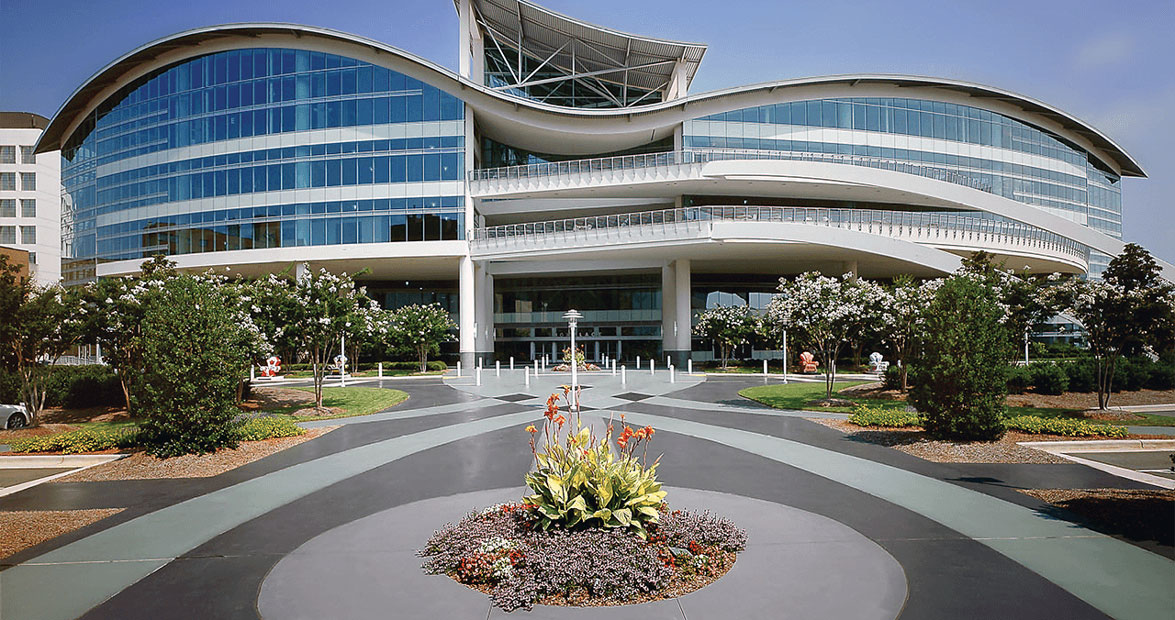 For a week in April and October, Triad-area residents don’t bother going out for dinner. “The market” is going on — the High Point Market, that is, the largest home furnishings trade show in the world — and restaurants will be crowded with some 75,000 furniture market attendees. Try to determine the absolute facts of its founding, and you’ll find nearly as many versions. American Furniture Hall of Fame CEO Karen McNeill, who’s documenting a history of the industry, laughs, “I’d be rich if I had a dollar for every person who’s taken me aside and confidentially told me that they were actually behind the High Point furniture market.”

And plenty of people were behind the early efforts to organize. By 1900, thanks to the Southern Railroad, cheap labor, and plenty of hardwood timber in the Piedmont and mountains, High Point was the leading furniture manufacturing center in the South. The next year, 35 area manufacturers met to discuss creating a furniture exposition to compete with markets in New York; Chicago; and Grand Rapids, Michigan. In 1902, 10 High Point industrialists pledged $1,000 each to the cause. Rival organizations — the High Point Furniture Exposition Co. and the Furniture Manufacturers’ Exposition Co. — joined forces in 1909 to create the first Southern Furniture Market. Attendance was, well, only moderate. Never mind. In that first decade of the new century, more than 250 furniture companies formed in North Carolina, double that of any other Southern state. A decade-long quest to build a large showroom facility began. In 1913, 100 manufacturers displayed wares to 1,000 dealers at the first Southern Exposition, an event that, for the first time, was compared to the great centers of the North. 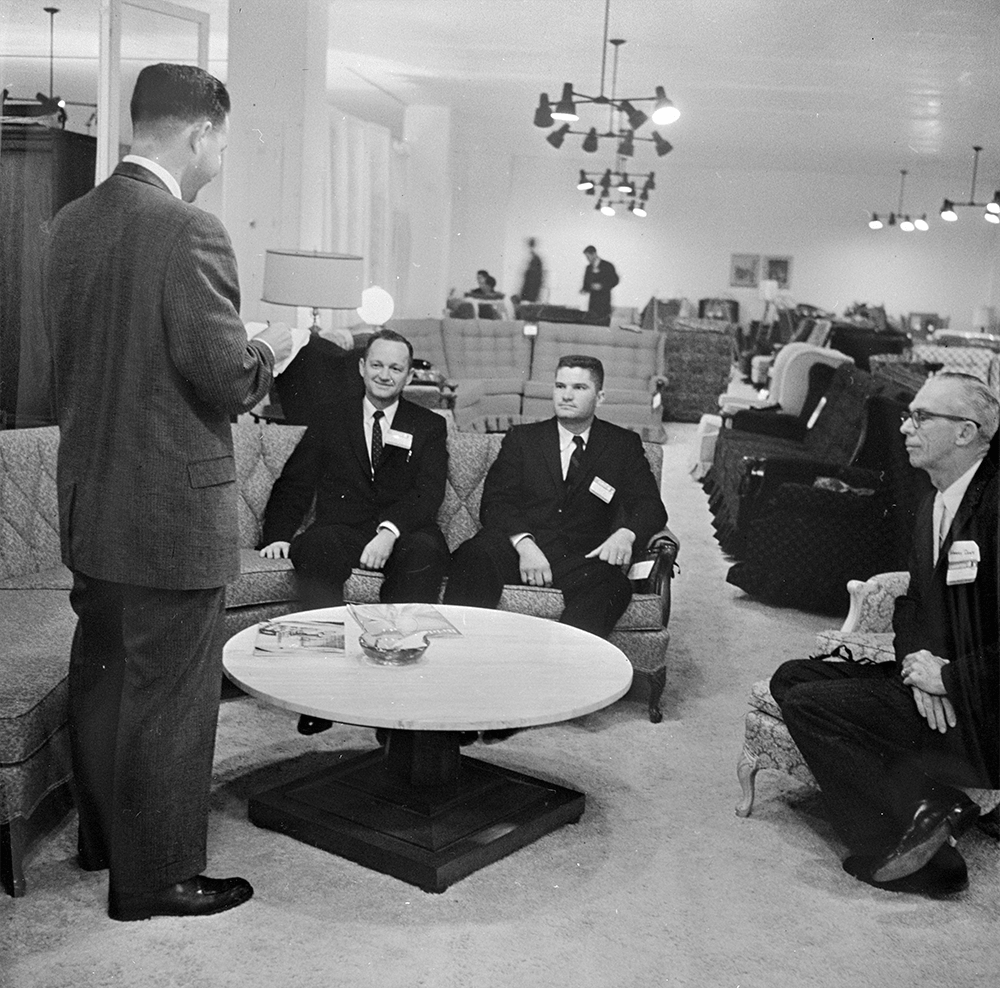 In 1919, High Point manufacturers pledged $35,000 for an exhibition center. Coy Williard, CEO of Williard-Stewart Inc. in High Point, recalls that his aunt bought stock in what would become the market. “Everyone all over town owned some,” he says. The building was completed in 1921, and in June, the Southern Furniture Exposition opened its first show. “Imagine the nerve they had!” says Charles Simmons, the unofficial “Mayor of Main Street” in High Point. “Their intent was to do exactly what Mr. Duke and Mr. Reynolds did [with tobacco]: eliminate the sales force.”

As early as 1922, insiders began referring to the event as “The High Point Market,” and by 1924, the exposition building had sold its last square foot of space. Still, in 1928, Chicago’s Merchandise Mart claimed the largest furniture exhibition in the country.

During the Depression, furniture production fell to nearly half of its 1929 peak. As the industry recovered, spaces were refilled at the Southern Furniture Exposition Building; in 1936, the show had a record attendance, with 2,485 buyers and 150 exhibits. According to E. LeRoy Briggs of Briggs Manufacturing Co., “The whole market, at that point, was in the big Southern Furniture Exposition Building. Our space was on the 11th floor … The building itself was not at all well decorated … No draperies on the windows. No air-conditioning. The floors were all battleship linoleum — no carpet. There was no attempt at all to accessorize the furniture and make it attractive or home-like. We made sofas, and we showed a sofa, and then behind that another sofa, and then another sofa. Chairs, chairs, and more chairs were crammed into that little space, but nobody had anything better.”

With the 1941 attack on Pearl Harbor, the Southern Furniture Exposition was put on hold. Thirteen and a half of the building’s 14 stories were devoted to the war effort as the Demobilized Personnel Records Branch of the U.S. Army. After the Army’s departure in 1946, the Southern Furniture Exposition reopened in January 1947 and was “swarmed,” according to McNeill, with more than 5,000 buyers. The postwar boom in housing had begun, and by 1955, almost one-half of all wooden bedroom furniture made in the U.S. was produced within a 125-mile radius of High Point. Allen VanNoppen, grandson of Donnell Van Noppen — the “don” in Henredon — says, “Scarcity of lumber drove the market south. We had high-quality fruitwoods, hardwoods, softwoods, and tiswoods to make the veneers and internal components.” (What’s tiswood? Junk wood, as in: “What’s that made of?” Shrugged answer: “ ’Tis wood.”)

Also, a meltdown had occurred in Chicago. “What happened to the Chicago market,” said former Vaughan Furniture Company Inc. president John B. Vaughan, who died in 2012, “[was that] Saturday, before the market was supposed to start on Monday, people started arriving from all over the country. All the hotels up there had overbooked their rooms. There were people sleeping in the halls, all over, anyplace they could find a place to lie down … The next day they … went home, and they never did come back.”

Still, the market “was pretty rudimentary in those days,” said former La-Z-Boy Inc. chairman Patrick Norton, who died in 2008. “It was terrible to shop … It was tough to find a place to live. If you were lucky, you got in the Sheraton.”

“High Point didn’t mean a lot until the mid-’60s,” says George Cartledge Jr., CEO of Grand Home Furnishings in Roanoke, Virginia. “There were still four markets in the ’60s: April and October, January and July. We started at the top [of the exposition building] and just worked our way down.” These were the days of the “figure-8 furniture highway” nickname, so given because manufacturers maintained their own showrooms in their own towns: Thomasville, Lexington, Statesville, Lenoir, Morganton, Drexel, Hickory. “Retailers would drive up and down I-40,” VanNoppen says. “This was great for the local economies, but the logistics got cumbersome.” Cartledge confirms: “We’d stay in Winston-Salem, go see everyone west, then come back to High Point. It just made sense, geographically, to be in High Point.”

Market Square opened in the renovated Tomlinson Chair complex in 1982, a move credited with starting the dramatic increase in showroom space that made High Point a major exhibition center. VanNoppen says, “In the ’70s, ’80s, and ’90s, High Point was the international furniture and furnishings market, with accessories, upholstery, and case goods, and that included the giants — big retailers, big manufacturers — and up-and-coming smaller companies.”

The January and July shows were discontinued, leaving the April and October shows. In 1989, the Southern Furniture Market was renamed the International Home Furnishings Market. Today, the High Point Market, so renamed in 2006, comprises 11.5 million square feet. Free shuttles run between showrooms, airports, even cities, to 180 buildings housing 2,000-plus exhibitors. “It’s been an evolution in High Point,” Vaughan said. “We’ve gone from just about a shack to the Ritz.” Charles Simmons, who swept the market floors as a teenager in the ’40s, still marvels at its very existence. “It ought not to be here. It’s not logical,” he says. “Imagine the nerve!”

Learn more about the High Point Market at highpointmarket.org, and read oral histories of industry leaders at furniturehalloffame.com.