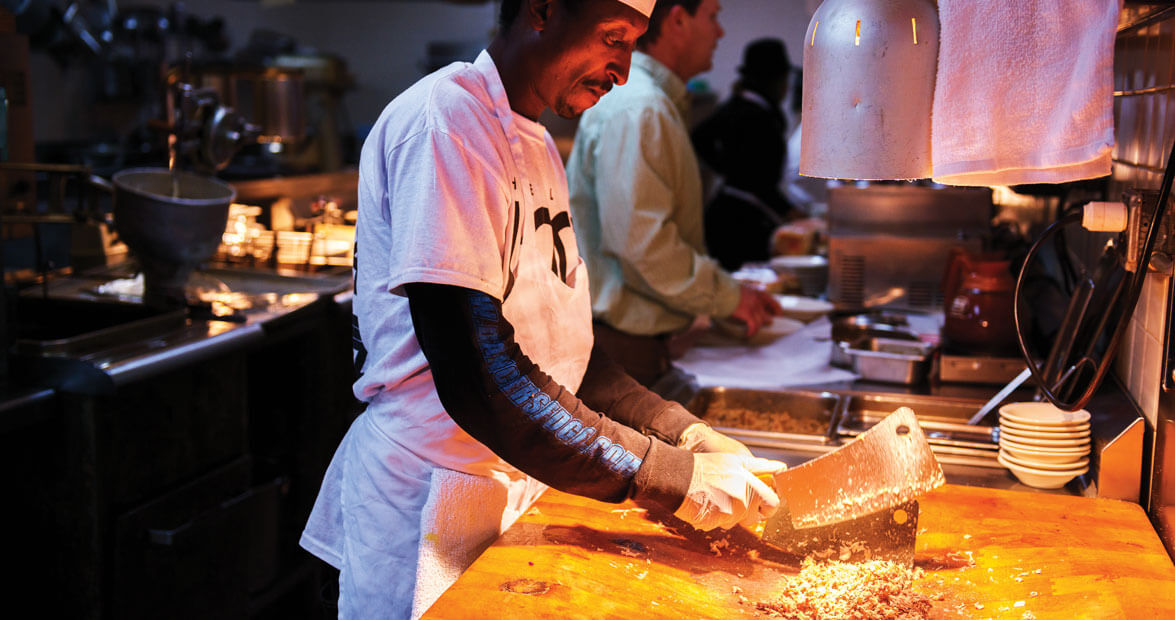 In the barbecue restaurant she owns with her husband, Sue Hill evaluates her flowers. The Easter lilies in the dining room look good, the jonquils still brighten the cash register area, but the hydrangeas aren’t doing so well. For decades, Sue worked here six days a week and looked after the flowers. She’s retired now, or as close as a person can be to retirement when it’s her family’s business. It’s all right, she says. One of the cooks also loves flowers, and he takes care of them for her.

“I guess that’s kind of unusual for a barbecue place to have flowers, huh?” her husband, Gene, says. “I used to think only the older people liked ’em, but we get more comments on those than you would believe.”

Looking around Hill’s Lexington Barbecue, you might think that flowers are the only thing that sets this place apart — the wood paneling, ceramic and wooden pigs, and relics of the ’70s like fish-eye mirrors all seem standard for this type of restaurant. But Hill’s has a long history — even longer than its decor suggests — and outside the restaurant windows, more than 60 years have flown by.

When Gene’s father, Joe Allen, opened Hill’s in 1951, there were just a few barbecue restaurants in Winston-Salem, and none of them served pork in the style now known as Lexington. People left town to get their barbecue fix.

He’d grown up on a farm in Davidson County and spent time as a butcher before entering the military during World War II. When he returned home, he and his wife, Edna, started a grocery store on Indiana Avenue, where they sold Edna’s bologna-and-cheese sandwiches to passengers on the city bus.

If they could sell sandwiches to hungry bus passengers, Joe Allen thought, surely they could sell barbecue to hungry Twin City residents. He bought some land on North Patterson Avenue, in an area of town that was flush with the success of Piedmont Airlines and a nearby Hanes factory. Lexington’s Coble Dairy furnished coolers and the original sign.

Gene, who’d just graduated from high school, put in part-time hours at his parents’ new restaurant while studying to be a state highway engineer. He met Sue, a city girl from Lexington, through a mutual friend. He spent a year speeding 70 miles per hour down U.S. Highway 52 to meet her after work. Then they got married in 1952.

In the early days, Hill’s served little else besides barbecue (for 30 cents), hot dogs (for 10 cents), and fountain drinks (for 5 cents).

The Hills worked hard as a family. By 1956, Gene was working full-time at the restaurant, putting in 12- to 14-hour days along with Edna, who he and Sue agree was “the backbone of the place.” Sue would come in around 8:30 or 9 every morning, after she sent their five children off to school, and work until they came home in the afternoon.

“One of us was always here,” Sue says, “and sometimes both of us were here. If we hadn’t worked so closely together, we probably wouldn’t have seen each other.”

Today the Hills cook their pork over hickory coals for six to eight hours and turn it once. They’ve had to adjust over the years. Gene recalls a short period in the ’70s when Forsyth County enforced an emissions ban, and the Hills had to switch to electric cookers for a time. It hurt business, especially since barbecue restaurants in surrounding counties had more lenient regulations.

But Hill’s survived, and expanded. Gene’s son, J.R. Hill, who is now the general manager, credits his father with the 1971 move from the original, 35-seat restaurant to the current location, a 200-seat building 50 yards to the north. Gene’s and Sue’s Davidson County childhoods have inspired additions to the menu, like barbecued chicken.

“I grew up in a city, but we had pigs and chickens and cows,” Sue says. “Every spring, when the chickens were just right, we’d have barbecued chicken, and everyone came over, and they’d have to eat at least half a chicken.”

The Hills’ customers reward the family’s hard work with steadfast loyalty. Even as the landscape around the restaurant has changed, even as the factories and offices that once surrounded it have departed, longtime customers know that when they visit Hill’s, they’ll still find a family company committed to good food and to the friendships they’ve made.

And all of those customers — the brand new ones who stop in on their way down U.S. Highway 52 to the beach and the ones who’ve been coming here for 50 years — pass by the portrait that hangs over the cash register. It’s a picture of Edna. If you get close enough, Gene swears you can see the glimmer in Edna’s eyes. She looks out over the restaurant, brightening the place a little, inspiring her family and reminding them of where they started.