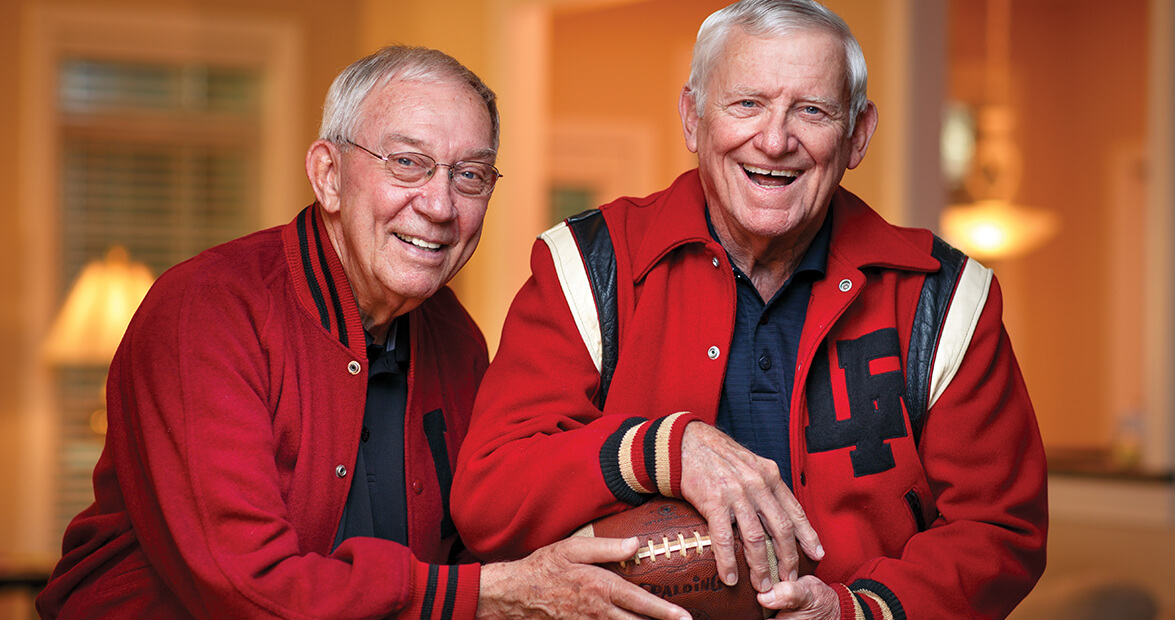 They couldn’t have been much more different. When Lenoir-Rhyne College won a national football championship in 1960, two of the heroes of that long-ago December night — Richard Kemp and Marion Kirby — might as well have been Abbott and Costello. The two athletes — Kemp from High Point, Kirby from Hickory — had precious little in common, other than being Bears teammates.

Kemp, a sophomore fullback, starred on offense, a quick, powerful runner who broke tackles with his athleticism. Kirby, a “scrawny,” “not very athletic” freshman (his words, not ours), played third-string center and didn’t see much action, except when called upon to kick extra points. Kemp would get a shot at professional football after college; after grad school at East Carolina University, Kirby would go straight into coaching. Kemp cracked teammates up with his sense of humor, while the more serious Kirby often was the butt of Kemp’s good-natured teasing in the locker room.

On that night, though — December 10, 1960, on a beat-up high school field in St. Petersburg, Florida — Kemp, Kirby, and their teammates made history and won the National Association of Intercollegiate Athletics championship, snapping the highly regarded Humboldt State Lumberjacks’ 20-game winning streak.

Kemp turned in his usual strong performance, but Kirby had a miserable game. A normally reliable extra-point kicker, he missed both opportunities after Lenoir-Rhyne touchdowns, leaving the Bears down 14-12 with time running short. If the Bears lost, Kirby would swap his helmet for a pair of goat horns.

Late in the game, Lenoir-Rhyne mounted one last deep drive. On a critical fourth down, Kemp broke several tackles and romped 25 yards, finally being dragged down just short of the goal line. Reminiscing about the run more than half a century later, Kirby still marvels at his teammate’s tenacity. 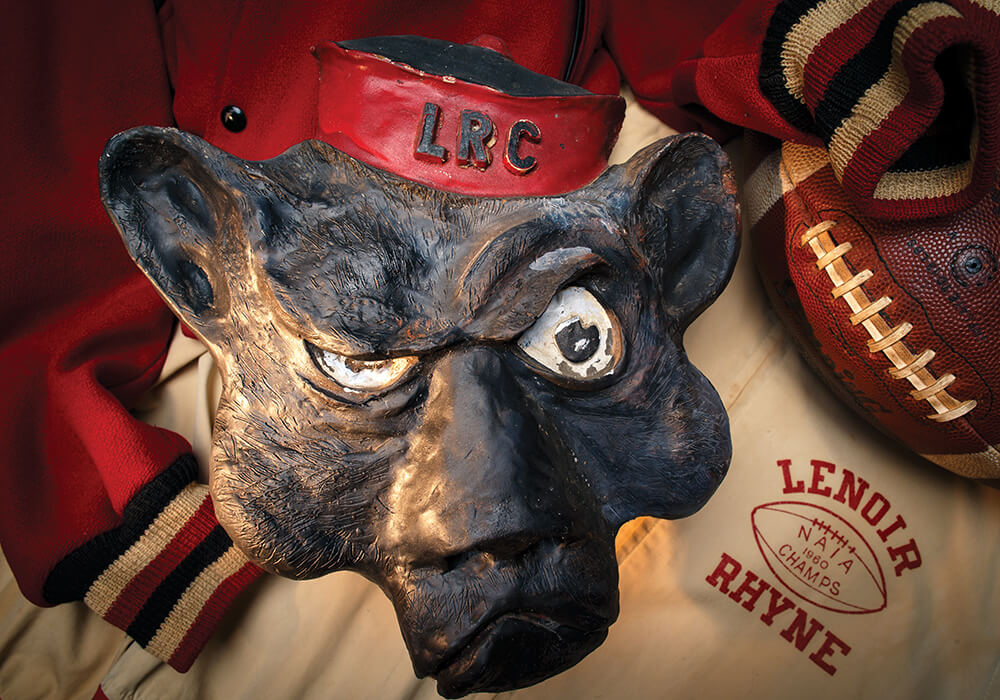 In addition to their lasting friendship, Kirby and Kemp left Lenoir-Rhyne with a collection of Bears memorabilia. photograph by Jerry Wolford & Scott Muthersbaugh

“Here’s the true story,” Kemp interrupts, trying to suppress a grin as he cuts his eyes toward Kirby. “I knew that after missing two extra points, we were gonna be minus a kicker if he didn’t do something to atone for that, so when I got down to about the 2-yard line, I just dove on the ground so they’d give him a shot.”

Kirby bursts into laughter. “You now have Kemp’s side of the story,” he says.

Three plays later, the Bears still had not gotten into the end zone, setting up a potential game-winning kick of only 23 yards — that is, if Coach Clarence Stasavich could trust his young kicker, already 0-for-2 on extra points, to make it.

“If I didn’t make it,” Kirby says, “I was afraid I might not have a ride on the plane home.”

Nonetheless, he strapped on his helmet and told Stasavich, “Coach, I’ll make that.” As the coach hesitantly thrust Kirby onto the field, he heard an assistant coach behind him yelling, “No! No!” Many of the 7,500 fans in attendance booed the decision, too, certain Kirby would miss again. Even in the huddle, with Kirby standing right there, a teammate pleaded to run the ball again rather than kick.

“Not everybody was just real full of joy that I was coming back in the game,” Kirby deadpans.

“Kirby set a record with that field goal,” he says, tongue in cheek. “It was the only time a field goal was made that was a spiral part of the time, and end-over-end the next. It was ugly.”

Ugly, but good, and Kirby — with only his second field goal of the season — became the unlikely hero.

If you haven’t picked up on it yet, there’s another chapter to Kemp and Kirby’s story, a chapter almost as unlikely as Kirby’s redemptive kick. Fifty-six years later, Abbott and Costello — er, Kemp and Kirby — are the best of buddies.

“We’re like the Two Musketeers,” Kirby says, “and I’m the straight man.”

“He’s never been straight a day in his life — he’s always been trouble,” counters Kemp, a bottomless fount of comic relief.
Not surprisingly, this friendship that formed through football also has been forged through football, and today — more than half a century later — it has proved more durable than a sturdy pair of shoulder pads.

Both men went into coaching — Kemp’s pro aspirations ended with a knee injury — and both were very successful. During the early years of their careers, they spent long hours on the phone, just talking football and bouncing strategies off of one another. They attended coaching clinics and conferences together. Both went on to win high school state championships in North Carolina. Both were inducted into Lenoir-Rhyne’s Sports Hall of Fame, and Kirby also made the North Carolina Sports Hall of Fame.

Today, they live about 20 minutes away from one another — Kemp, 75, in High Point, and Kirby, 73, in Greensboro — and when they don’t meet for dinner, they at least talk on the phone every week or two.

Ask them why they’re such good buddies, and Kirby begins to rhapsodize about the merits of their friendship. Predictably, Kemp interrupts again.

“Nobody else liked us,” he says with a grin. “We were each other’s last chance.”

Kirby rolls his eyes, but then laughs politely at his friend’s humor, as if to at least acknowledge the effort. After all, that’s what teammates do.