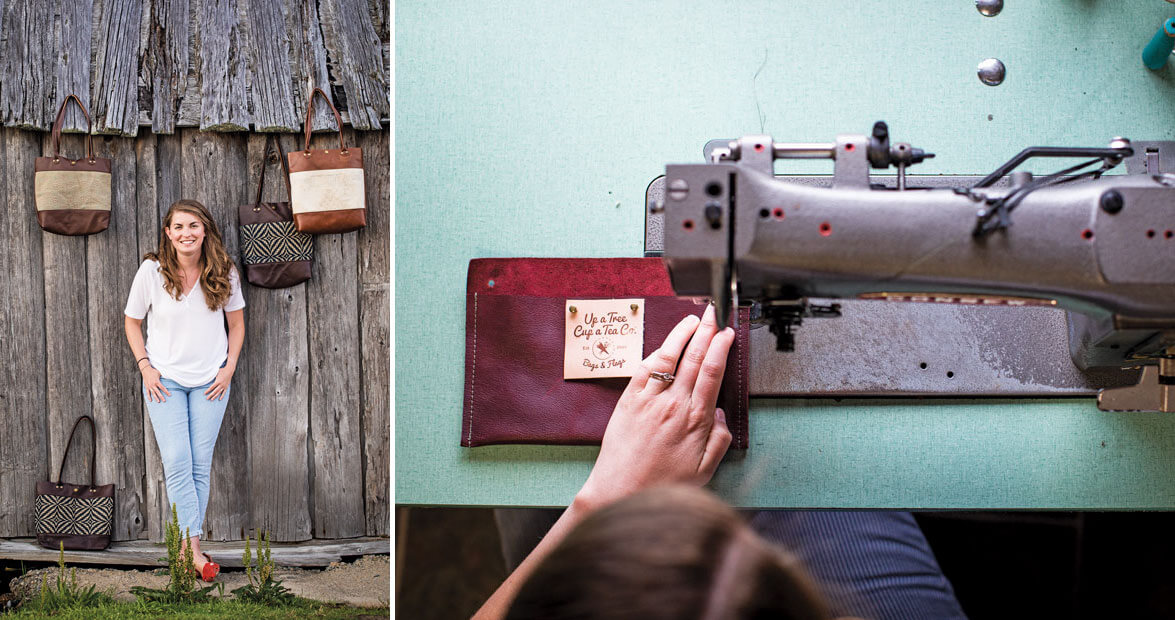 Johanna Parker was on a mission, digging through the back of a rusty pickup truck in an old barn at a Halifax County estate sale. She spotted some familiar-looking linen: a sheet of intricately woven royal-blue-and-cream fabric. Jackpot. She gathered up the stack, paid for it, and drove back home to Spring Hope.

A few months earlier, Parker had stumbled upon similar fabrics and wondered what they had been used for. Scouring the Internet, she learned that the material, called overshot fabric, was more than 100 years old. It was first woven during the Civil War and used as coverlets. But for Parker, this old, thin blanket was a potential handbag. She laid out the fabric on the table in her sewing room and experimented to see how it would look against chestnut brown leather. When she stitched the two together, the combination was beautiful.

The antique fabric that Parker found in the back of that truck in 2016 is a mainstay in the Americana handbag collections that she sells online under the label Up a Tree Cup a Tea Co. Parker is always on the hunt for vintage fabrics with a meaningful past. She rises early to begin her searches, and spends her nights and weekends behind a sewing machine, making accessories that tell stories. “I want you to buy something because you want to carry around your grandpa’s tool belt every day instead of buying a purse at Target,” she says. “I want the ‘meaningful relationship story’ part.”

Up a Tree’s story begins modestly. Parker had no elaborate business plan. She was simply looking for a cheap way to give Christmas presents while in college at the University of North Florida. She used what she had — two sewing machines — to turn crocheted yarn into flower pins and headbands for friends and family. Eventually, she began selling them to fellow students and moms with young daughters. During her junior year, she got a business license so that she could attend art markets. Parker was moonlighting in the creative world while juggling two jobs and a full class load.

In 2012, fresh out of school, Parker landed a job that brought her to North Carolina, to teach in Halifax County. She and her future husband, Lance, moved to Roanoke Rapids before settling in Nash County. There, Parker spent her free time poking around old buildings, estate sales, auctions, and flea markets.

“It was like opening a garage that no one had been in for 20 years.”

“The yard sales were so different from anything I’d gone to before,” she says. “It was like opening a garage that no one had been in for 20 years.” Parker noticed that many of the items she was finding in the old barns and sheds of eastern North Carolina — piles of tool belts, felt pennants, cloth bank bags — had interesting backstories. The stories inspired her to create a line of handbags. Initially, the only modern components that she used in the bags were the thread and clasps. But they were falling apart because the old textiles needed more support. So she experimented with leather and bought an industrial sewing machine from a man who’d used it to sew sailboat sails.

In 2018, though, Parker’s creativity came to a halt when her mother died unexpectedly. “It was super sudden and terrible,” she says, her eyes welling with tears. “People always joke that their moms are the first ones liking all their stuff on social media. That was my mom.” Parker stopped signing up for markets. She put her materials in storage. She took some time off. “I honestly didn’t know if I was going to do it again at all,” she says. “And then I really missed it once I came to terms with, ‘I can do this without her.’”

In March, following a yearlong hiatus, during which Parker gave birth to her daughter and moved to Kill Devil Hills to work for Dare County Schools, she began sewing again. Now, she says, she’s more selective about her projects, and she’s set a goal to release small collections three to four times a year.

And her No. 1 fan is still with her in spirit. On a shelf in Parker’s sewing room is a photograph of her mother, Margaret Jeanne. She’s smiling in the sunlight, her thick, curly brown hair waving in the wind. Nearby, on the floor of Parker’s workspace, a 16-month-old baby girl gleefully plays in piles of fabric scraps, her curly hair, blue eyes, and name, Magnolia Jeanne, reminders of the woman in the picture, her grandmother.

Up a Tree Cup of Tea
upatreecupateaco.com