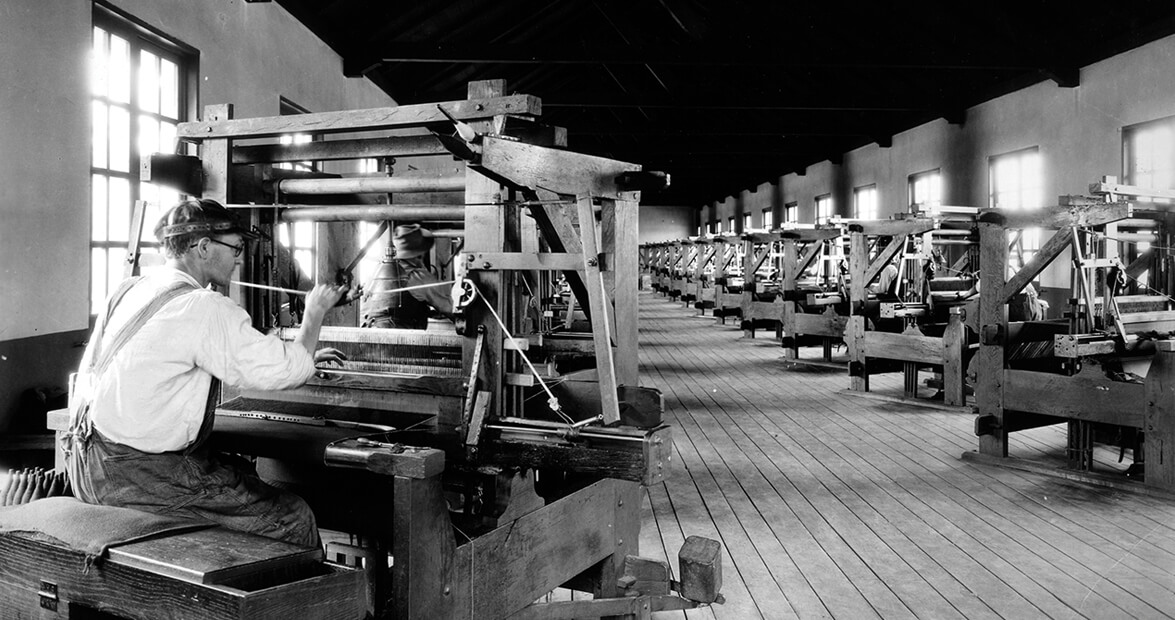 Barbara Blomberg remembers the carded and spun Biltmore Homespun wool, hung in taut blocks of color and pattern, stretched out on fences behind Grovewood, easily in view of guests staying at the historic Grove Park Inn in Asheville. The fabric — always washed only in pure Ivory soap — was placed in the mountain sun to dry, to naturally stabilize the dyes and ensure maximum shrinkage before being sent to a tailor or dressmaker.

The guaranteed shrinking process, which had begun in the early 1900s, worked. The fabric became the choice of presidents and first ladies, inventors and entrepreneurs. Devotees wrote letters decades later claiming their Biltmore Homespun suits still looked smart and stylish.

“I used to take tours as a young girl,” says Blomberg, daughter of preservationist Harry Blomberg, who purchased Grovewood in 1955. “All the machines were working. People had seen weaving, but they hadn’t seen the whole process starting with the wool right off the sheep.

“The wool was washed, dyed, carded, and spun, and then threaded and put on mule spinners,” she continues. “The threading was so intricate, it would take hours to create the patterns.” 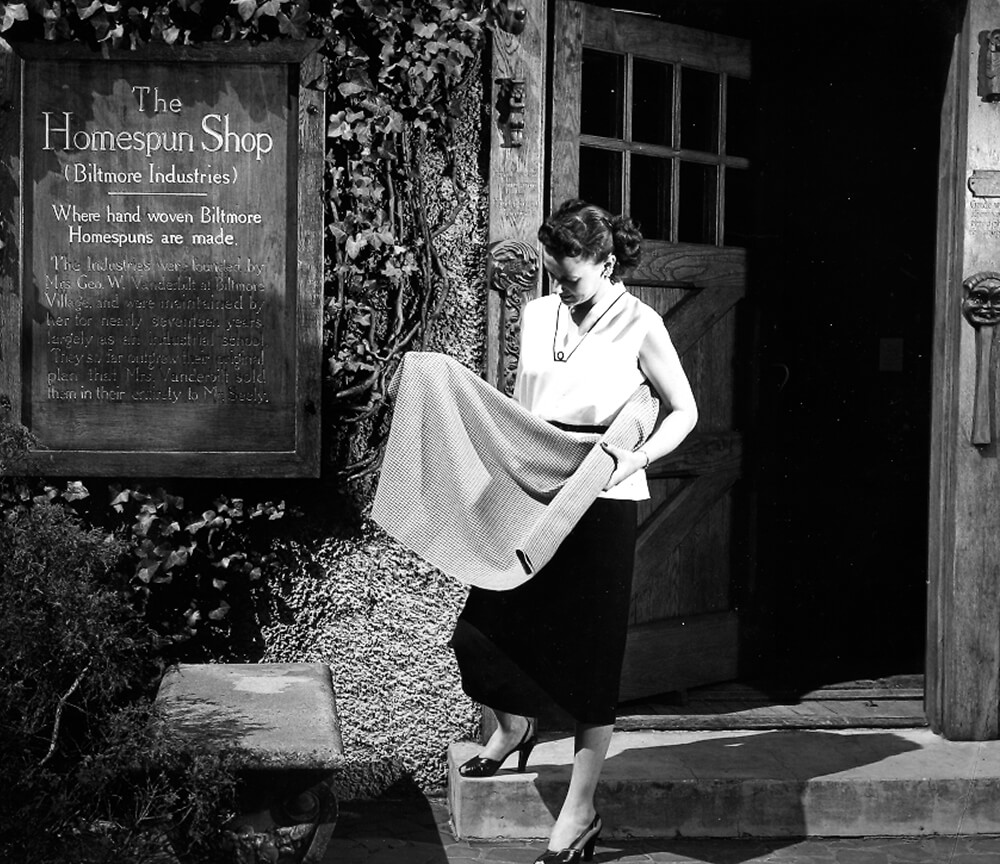 Biltmore’s fabric was beloved by many, including presidents and first ladies — some even had fabrics named for them, like Coolidge Red and Hoover Gray. photograph by Grovewood Village and University of North Carolina at Asheville

In April 2017, the vast dye and production building at Grovewood Village opened for tours for the first time since the 1980s, alongside Grovewood Gallery, which is open daily. Harry Blomberg’s antique car museum and the Biltmore Homespun Museum are open March through December, and some of the working artists’ studios are open on select dates February through November.

Gone are the rhythmic motions of the shuttle, the click and clack of the loom frame, the measured silence of the maker. But threads, woven fabric remnants, fully threaded spools, and Biltmore Industries-labeled burlap sacks stand as proof that this was once one of the largest manufacturers of handwoven fine wool in the world.

“It’s exciting to open the property for tours again,” Blomberg says. “It’s important to carry on the legacy, the history of Biltmore Industries, which was such an important part of Asheville’s history. I think it’s important to share the stories of Mrs. Vanderbilt, Charlotte Yale, and Eleanor Vance, the women who started the whole enterprise.”

Grovewood Village is considered by most Ashevillians to be one of the city’s best-kept secrets.

Biltmore Estate Industries began as an instructional woodworking class for young boys whose families worked on Biltmore Estate. Yale and Vance, two Northern, missionary-inspired women full of ideas about societal reform, started the classes, soon adding weaving instruction for young girls. Part of a larger Social Gospel Movement in the late 1800s and early 1900s, the work of these women — supported by the patronage of Edith Vanderbilt — became a cornerstone for the American Craft Revival in the mountains of North Carolina.

With the goal of “uplifting” families of Appalachia through encouragement of craft skills and industry, women like Yale and Vance taught mountain women to hone their weaving skills in order to produce a finer woolen fabric that would appeal to a wider and more affluent consumer audience.

The humble mountain coverlet would lead the way, inspiring other women across the North Carolina mountains, such as Olive Campbell and Marguerite Butler, who started the John C. Campbell Folk School in 1925, and Lucy Morgan, who began Penland School of Crafts in 1929. Weaving became a source of income for mountain women, many of whom were the sole supporters of their families, and also a source of pride. For many women, their skills as makers offered them a sense of self-sufficiency.

Biltmore Estate Industries, with the substantial influence of Vanderbilt, would demonstrate the viability of commercialization of Appalachian weaving. 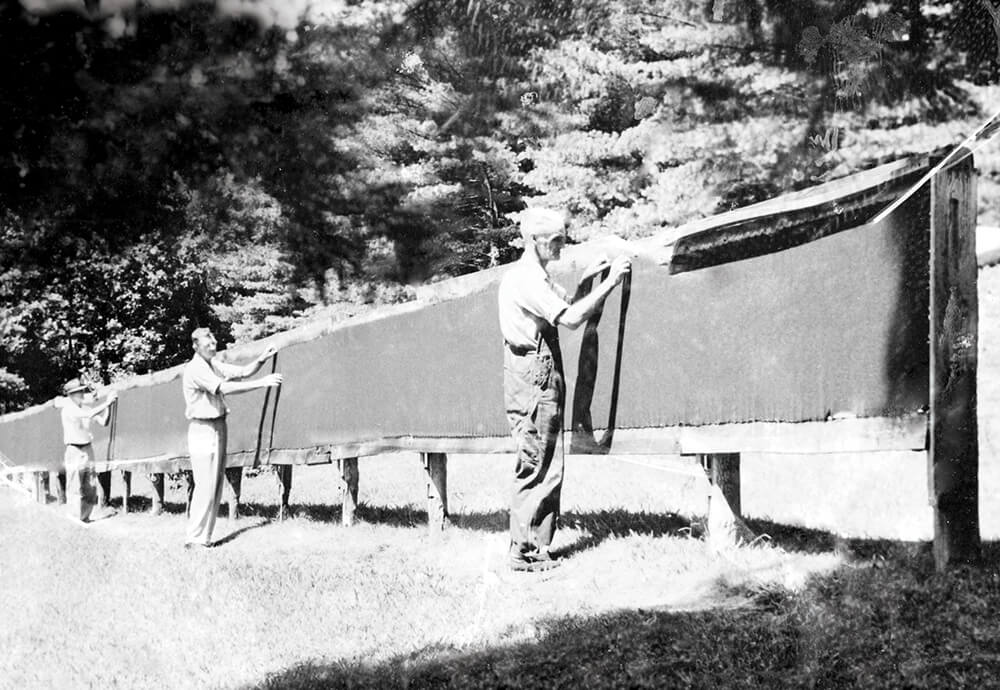 Biltmore’s shrinking process involved scouring the homespun in Ivory soap, then hanging it in the sun for a full day. photograph by Grovewood Village and University of North Carolina at Asheville

When George Vanderbilt died in 1914, Edith Vanderbilt approached her friend, hotelier Fred Seely, who had overseen his father-in-law’s construction of Grove Park Inn. He agreed to purchase Biltmore Estate Industries — changing its name to Biltmore Industries — and to build six English cottages to house it.

From the 1920s through the 1940s, Biltmore Homespun was the material of choice for Thomas Edison, Eleanor Roosevelt, Helen Keller, and Grace Coolidge, who had her own signature Biltmore Homespun Coolidge Red yarn. The business thrived until the 1950s, when the economies of modern industrialization usurped the demand for handwoven wool.

Enter Seely’s friend Harry Blomberg. A proud native of Asheville, Blomberg recognized the historical significance of Grovewood and agreed to buy the entire 20-acre campus — as long as it included the moonshine still that was tucked away in the dye building.

Today, Blomberg’s descendants own and operate the quaint English cottages on the property, which sits on a bucolic wooded campus adjacent to the Omni Grove Park Inn. In celebration of the centennial of Biltmore Industries’ 1917 sale by Vanderbilt to Seely, Grovewood Village is offering ongoing artist demonstrations on the property and new tours. The antique car museum is also available for private events, allowing attendees to socialize between a Cadillac Eldorado and a Tin Lizzie.

Grovewood Village is considered by most Ashevillians to be one of the city’s best-kept secrets. And the availability of one-of-a-kind handmade art and crafts — demonstrated, exhibited, and for sale at Grovewood — is a tribute to the Appalachian women, past and present, who have dedicated themselves to the inherent beauty and goodness of what a skilled makers’ hands might create.

“The gallery has always been the most recognizable part of the property,” Barbara Blomberg says. “But now I see the whole village as being important in perpetuating the history. My father always loved Asheville and was really proud of the city. He was so appreciative of where he lived, and he didn’t want to see this place die. I wonder what he would think of it today.”