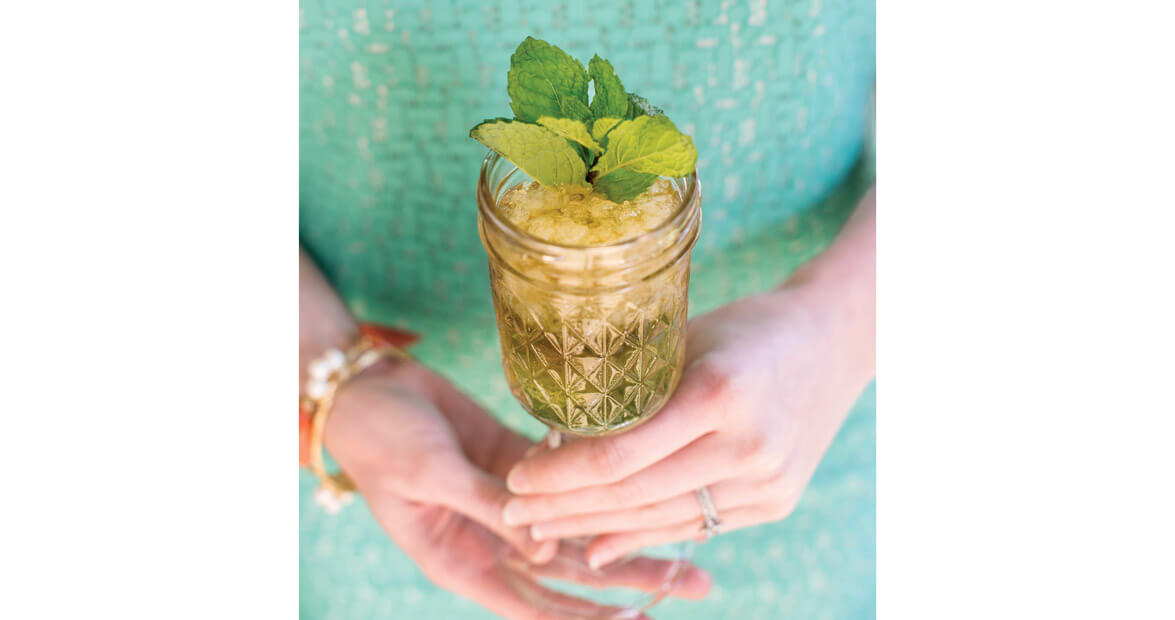 Very Scott and Zelda, The Carolina Hotel. With its copper-topped cupola, white clapboards, and green roofs, you expect to see Jordan Baker from The Great Gatsby walking across the crisp front lawn, shoulders back and spine erect “like a young cadet,” her favorite aluminum putter still in hand from a day on the golf courses of Pinehurst. (No cheating now, Jordan.) The hotel’s white rocking chairs are lined up on what is definitely a veranda — no mere “porch” would do.

When you take a seat on that shady veranda, what should you order? Please tell me you’ll do it: a mint julep.

Cold and sweet, with the nose-tingling bite of mint mingling with the caramel note of bourbon, glass frosted and the drink just barely watered down by a mound of crushed ice. The making and serving of a julep is a ritual, a coda at dusk announcing the end of a warm day.

It’s a little sad, though, to find the julep held in low regard by some. Stop by the Pinehurst Welcome Center, and you won’t find julep fans. One woman behind the desk dismissed juleps as “that nasty stuff that tastes like cough syrup.”

Well, no, it shouldn’t. Not if it’s made properly. The South’s most venerable cocktail deserves a little more respect than that, doesn’t it? Yet even in Louisville, Kentucky, the julep’s spiritual home during Derby Week, it gets reduced to a fad, made by the thousands until the race is over, when it gets put away along with all those hats.

Luckily, the resurgence of interest in bourbon is pulling the julep back to the center of the party, where it belongs. Juleps have a very long history in the South. An 1803 report published in London described people drinking “a dram of spirituous liquor that has mint steeped in it, taken by Virginians of a morning.” Morning might be a bit much, but the julep is made for the South, for hot afternoons and humid evenings. It’s as much a part of our survival here as ceiling fans and white cotton.

In my house, we take juleps seriously. My husband isn’t a cooking man, but he makes regular forays into the kitchen to replenish the supply of mint syrup we keep on hand from April to November. For our 25th anniversary, he gave me my own silver julep cup, engraved with our wedding date, to match the pair we inherited from his parents.

In the wood-beamed Ryder Cup Lounge at The Carolina Hotel, they would understand our love of juleps. Juleps are taken so seriously there that they’re not just served in the summer. There are special versions served all year, flavored with the different mints — chocolate, spearmint, and big leaf — that are grown on the grounds.

Brian Couey, who manages dining operations at the hotel, isn’t surprised when he hears that my quest for a julep was dismissed at the Welcome Center. “Locals drink what they drink,” he shrugs. But out-of-towners want a true Southern experience.

“They don’t want a New England drink, like a Dark ’n’ Stormy,” Couey says. “They’re looking for local experiences and indigenous ingredients.” They’ll go for the deviled egg plate, served with a wide channel of pimento cheese, and they’ll definitely have a julep.

The Ryder Cup’s version goes like this: First, a footed half-pint Mason jar that they call “Southern stemware.” Add an inch-deep layer of mint, followed by chunky crushed ice. Top with Woodford Reserve bourbon and mint-infused simple syrup made with brown sugar.

Brown sugar syrup complements the caramel flavors in the bourbon. “The sum of the ingredients is what makes a great cocktail,” Couey says. A bad julep is an unbalanced julep: “Too sweet, or too alcoholic. There’s no other mixer, so the crushed ice is the key.”

In the Ryder Cup Lounge, they toyed with using silver cups but went with the Southern stemware. The clear glass lets you see the mint, and it gets frosty, like a silver cup would. Couey thinks it has a quirky elegance that fits the old hotel. “We’re Old South and upscale,” he says.

Scott and Zelda would probably be fine with that.