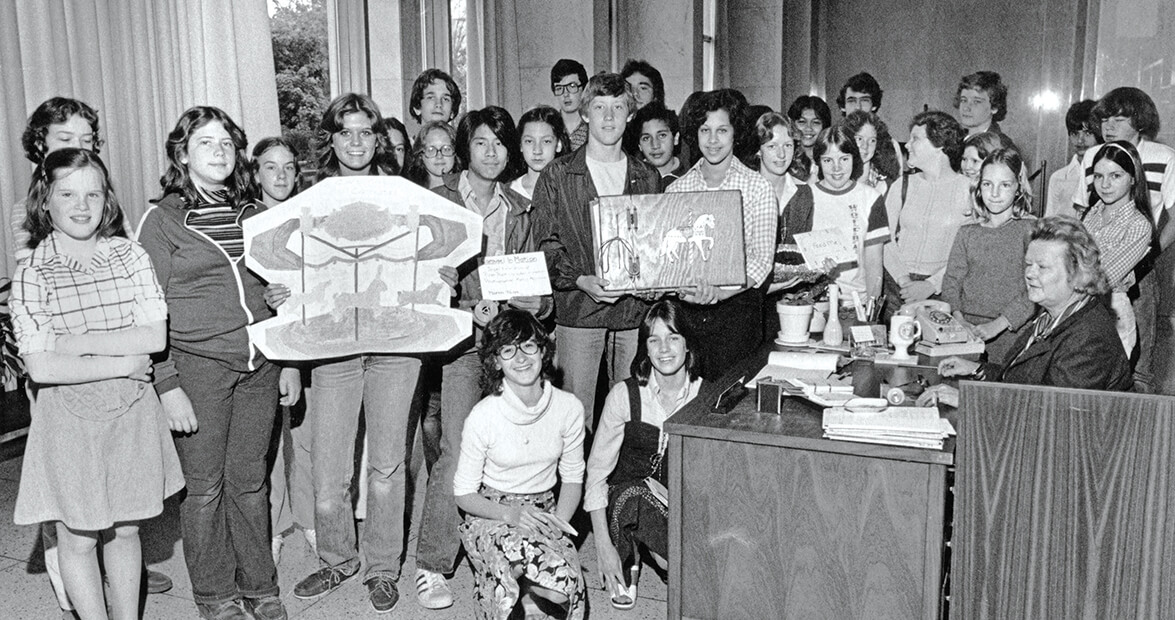 The Martin ’76ers were on a mission. It was 1978 and, with the nation’s bicentennial fresh on their minds, the young members of the Tar Heel Junior Historian Association (THJHA) chapter were determined to find a service project that would have a lasting impact on their community.

They found their focus just five miles from Raleigh’s Martin Middle School, where the dilapidated remains of a once-glorious carousel stood at Pullen Park. Exposure to the elements and vandals had damaged artfully carved and painted animal figures, snapping the tails of big cats and leaving just wisps where full manes of horsehair once brushed the faces of gleeful children.

“It really was a mess,” recalls club president Joey Morris, now a partner at Raleigh’s Smith Anderson law firm. “We all grew up with it. It was a shame to see it in that condition.”

Twenty-five years after state legislators created the THJHA program to inspire students to investigate local history, the ’76ers threw themselves into action. Although the Pullen Park carousel had been added to the National Register of Historic Places in 1976, there was little enthusiasm for funding a costly restoration. 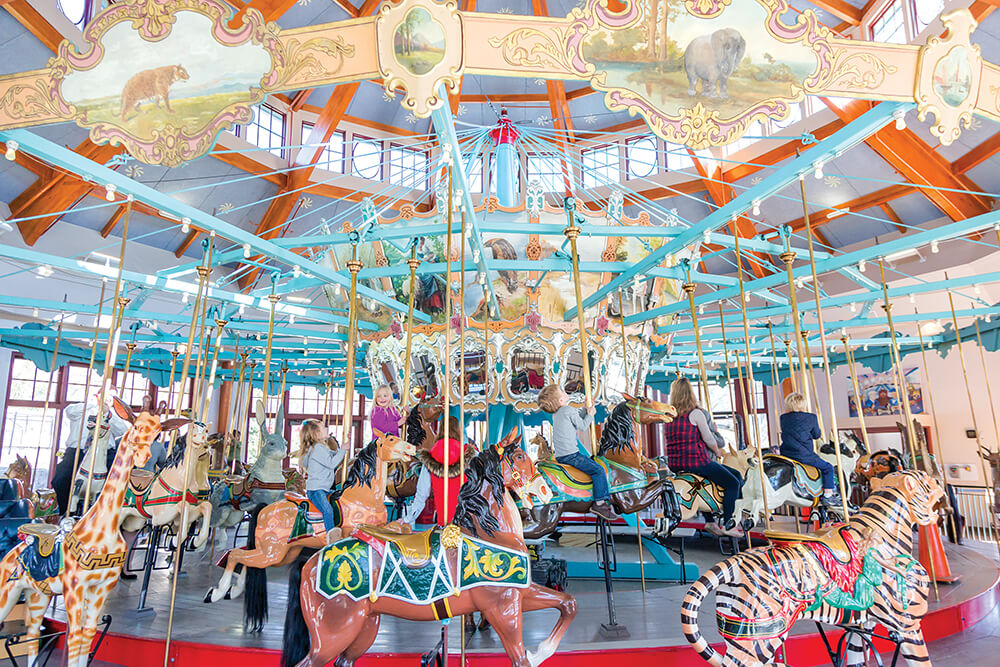 Morris delivered an impassioned pitch to the Raleigh City Council, and his peers alerted citizens that the carousel was at risk of disintegrating. A groundswell of support eventually backed a three-year effort to restore its original splendor.

“We were given a lot of support from adults to run as far as we could with this,” recalls Morris, whose three children have grown up riding the iconic landmark. “I think it did give me an opportunity to see, probably for the first time, that we can have an impact on the world around us.”

“Junior Historians … creates a better understanding of why our community is what it is.”

“That’s one of the projects we like to talk about,” smiles Jessica Pratt, program coordinator for THJHA at the North Carolina Museum of History, which displays student projects and encourages discovery and engagement. “We cover a lot of history, but we can’t cover everything. They are helping us teach North Carolina history and culture to everyone.”

More than 5,000 students participate in 128 THJHA clubs across 53 counties, making North Carolina’s program the largest in the nation. Hundreds of students travel to Raleigh each April to participate in an annual convention and awards ceremony.

Inspired by kid sleuths like the Hardy Boys, youth historical societies popped up across the country in the 1940s and ’50s. Their heyday was around the bicentennial, when students like Joey Morris embraced a patriotic urge to delve into their community’s place in history.

Although students in grades four through 12 can become Junior Historians, fourth and eighth graders dominate membership — those are the years when public school curriculum includes units on North Carolina history. But lessons skip over a lot of detail that is important to many communities.

“That’s where Junior Historians can really play an important role,” Pratt says. “Anytime kids dig into their own local history, we get excited. Their work goes into the museum, just like work from adult professional historians. They also get involved in the presentation and sharing of what they did and what they discovered.”

The program has inspired its share of success stories. Dr. Kevin Cherry, deputy secretary of the Department of Cultural Resources, got his start researching state symbols as a fourth grader at Rock Springs Elementary in Denver. Decorative Arts Curator Michael Ausbon was part of a 1978 Martin County team that researched eastern North Carolina’s evolving tobacco industry, producing an 86-page book that resides in the museum’s research library. 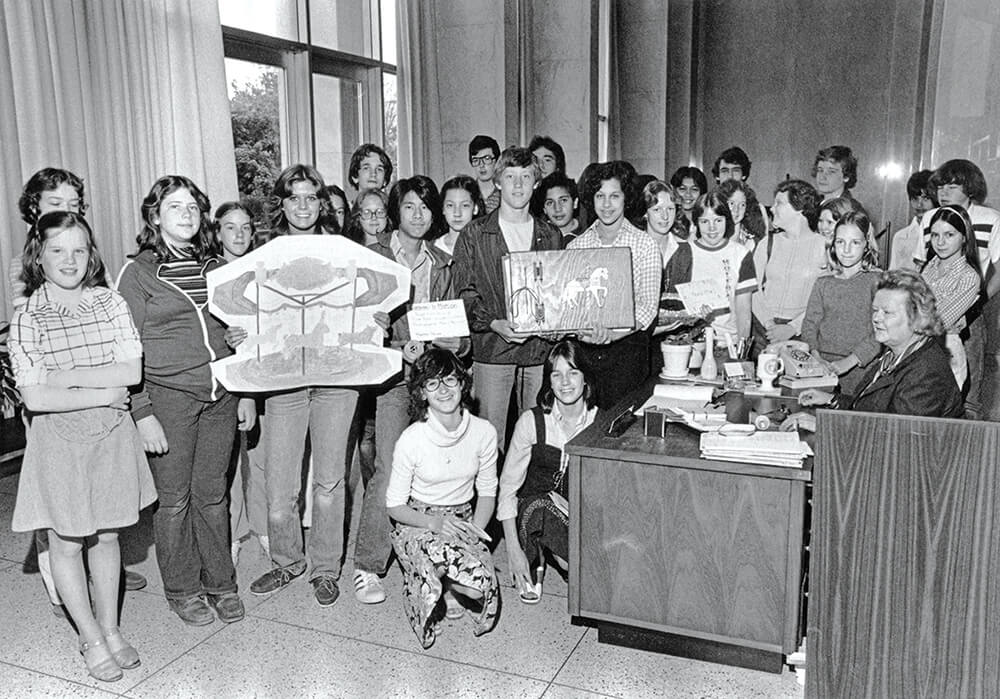 At least one project commanded national interest. In 1995, Katie Burkart, a student at P.S. Jones Middle School in Washington, made it her mission to bring attention to the African-American surfmen at Pea Island. The men are credited with saving everyone aboard the schooner E.S. Newman, which wrecked on the Outer Banks in 1896.

Burkart launched a letter-writing campaign, urging everyone from local elected officials to President Bill Clinton to honor the men whose valor had been ignored because of the color of their skin. Ultimately, Senator Jesse Helms requested a formal inquiry. The Coast Guard, which had declined a related bid two years before, posthumously awarded a Gold Life-Saving Medal — its highest peacetime honor — to the descendants of the Pea Island surfmen.

“It taught students, first of all, the history, but also the importance of giving back,” says Brown, 2015 THJHA Adviser of the Year. “That’s what service is about; finding the piece where you can help where no one else has.”

In connection with a traveling Smithsonian exhibit, Glenda Edwards, an adviser of the Mount Airy Museum of Regional History’s club, the Jesse Franklin Pioneers, coordinated activities for students to learn about traditional music, and took them to the annual Surry Old Time Fiddlers Convention to conduct oral history interviews with peer-aged performers.

“We wanted to build in a comfort level of connecting with other kids, but it’s also about exposure to new things,” Edwards says. “Right now, we’re studying local families — doctors and bankers from the 1890s, administrators of the tobacco companies and granite quarries. That’s the beauty of Junior Historians. It creates a better understanding of why our community is what it is.”

The 2016 exhibit at the NC Museum of History celebrates such achievements, and features a video of museum founder Fred Olds calling upon young people to get involved in discovering and preserving their patch of history.

“It’s a funny coincidence, but I went to Fred Olds Elementary,” Joey Morris says. “I guess there’s no escaping history.”