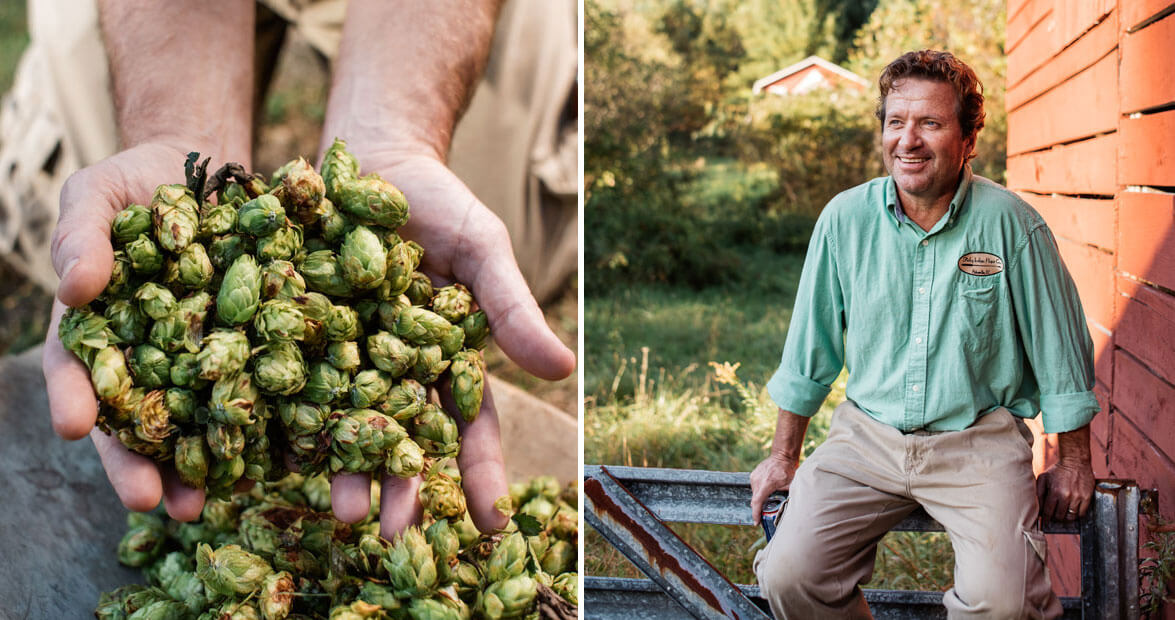 Phillip Davis waited until his father, John, was 81 years old before he hatched a plan for the two of them to grow hops on their farm in Candler. Since the family’s cows, chickens, and tobacco had been replaced with white pines for the timber industry, he’d been searching for another way to make use of the 51-acre parcel of land. Plus, he likes good beer.

So in 2009, Davis and his dad put up two telephone poles, planted a few hop plants, and waited. The crop’s vertical bines, which can grow to a height of more than 16 feet, bloom into bright green flowering cones and, when split, smell like beer. (Unlike a vine, which uses tendrils to grow vertically, a bine uses stiff hairs to hang on as it twists upward.) That first year at Sticky Indian Farm — named for the sticky substance inside hop flowers and the land’s history as a streamside Cherokee campground — their hop plants burst out of the ground like fireworks.

“We really didn’t know what we were doing,”  Davis says of the hop seasons that followed. “We ordered about 600 plants and started up the string and just started selling them.”

It was a homecoming of sorts for the delicate crop: Davis’s grandmother had brought a hop bine with her from over the hills in Cashiers. She’d stuffed pillows with the plants for their sleep-inducing effect. That same variety was one of five that Davis started experimenting with, lovingly referred to as “Grandma’s Hops” and grown alongside popular varieties including Chinook, Nugget, and Cascade. Despite its place in family history at the Davises’ farm and at others in the area, however, not many western North Carolina farmers are growing their hops for cash.

North Carolina sits right on the border of land where hops thrive and land where they fail. The labor- and nutrient-intensive crop is picky, demanding seasons of a certain length and days with the right number of sunlit hours. They don’t like the “wet feet” of soggy soil, and they require a nutritious diet of enrichments as well as a fastidious watch for pests and disease. In short, hops are anything but a safe, profitable bet.

Still, gambling can be fun.

In brewing, hops create balance, adding bitterness and aroma. In the Northwest, farmers offer breweries dried and pelletized hops in bulk. Sticky Indian can’t compete with that, but Davis and other North Carolina hop farmers can offer something unique as they haul fresh-picked cones to local brewers within hours of picking: a flavor profile that, for one glorious batch of beer a year, bears the vegetal notes of its birthplace.

When you can taste the bine, he says, that’s when you get a read on the flavor. Like in Van’s Wet Hopped Front Porch Pale Ale, which Garcia brewed with fresh hops, hours off the bine, from farmer Van Burnette’s Hop’n Blueberry Farm down the road. It remains one of the highest-rated brews Garcia has ever sold.

Ten years ago, when Burnette started growing hops on the land his family has farmed for more than 185 years, he became one of the South’s founding fathers of the crop. After research, grants, and a whole lot of trial and error, Burnette can rattle off facts about hops’ flavor-producing lupulin glands and show off his handmade cranking system, which raises and lowers the wire trellises that the plants climb in pursuit of sunshine come harvest time. But it hasn’t been easy, and a downy mildew infestation last year served as the final straw. In a blog post on Hop’n Blueberry Farm’s website, Burnette said farewell to the crop he dedicated a decade to: “Goodbye bitter flower.”

But there’s hope for hops in western North Carolina. Researchers at NC State University’s Mountain Horticultural Crops Research and Extension Center in Mills River are trying to identify or create hop varieties that can thrive in our state’s climate and conditions. And that’s one reason Davis plans to keep planting each year, tending his grandmother’s hops, hoping they can fend off the onslaughts of nature to create an undeniably regional taste.

This past season, the first after his father passed away, Davis thought about calling the whole thing off. “It was tough without him,” he says. “He was the reason we started the whole thing and the reason we kept doing it.” But there was a surprising silver lining, as Davis sat on the porch with his sister Janice and their 88-year-old aunt Ellen, picking the hops cones off the bines and telling stories about John and the old days.

“I got to know her and the life she had on that farm,” Davis says. “I’ve spent more time and money on the hops than I will ever recover, but in these few years I got to know family.”