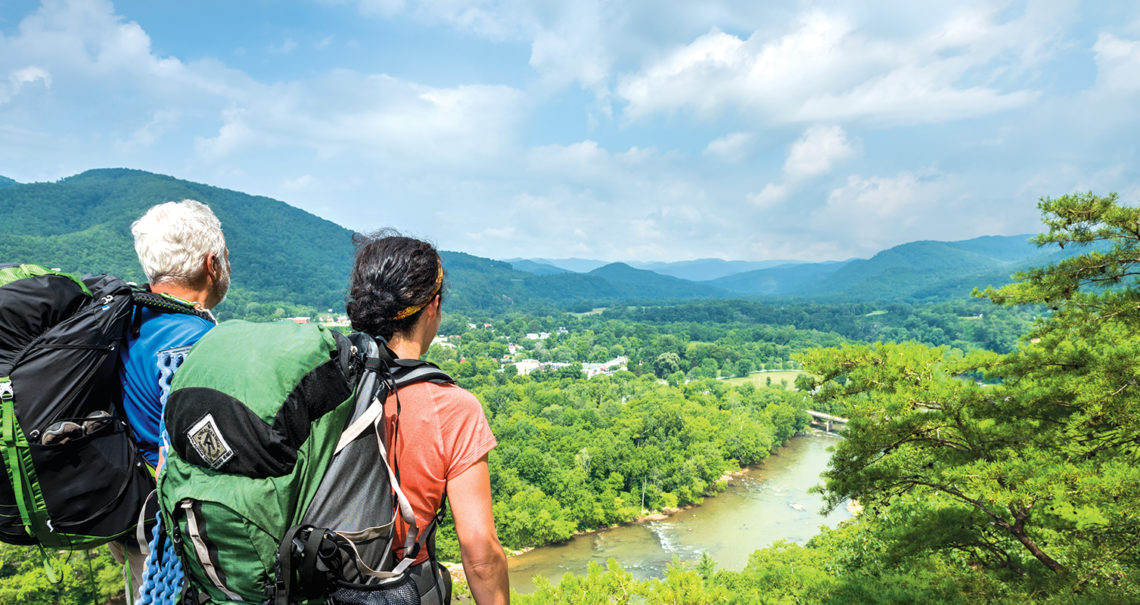 One spring night in Hot Springs, I drank a couple of beers at the Spring Creek Tavern, meandered back to my room at the Sunnybank Inn, and slept soundly until 8 a.m., when I creaked down the stairs to the kitchen in search of coffee. There, I met a gentle young man with large, clear eyes who had hiked 34.9 miles the day before and who planned to keep up a similar pace every day for the next two months, in an attempt to finish the 2,190-mile Appalachian Trail in a punishing 70 days.

On one hand, this man’s journey made me feel lazy. On the other, it made me feel sane. Suitably conflicted, I headed out after breakfast to walk a few miles of the Appalachian Trail myself.

“Hike your own hike” — meaning go at your own pace, and if you disapprove of the pace of others, keep it to yourself — is the quasi-official slogan of the AT, and not a bad philosophy of life. It’s an approach that Hot Springs residents have taken to heart, in part because they don’t have much choice: the Appalachian Trail runs smack through the middle of their town.

Hot Springs, population 650, follows the seasonal rhythms of the trail. What one local merchant calls “harvest time,” for instance, happens in the spring. That’s when a few thousand northbound thru-hikers — those planning to complete the AT in one trip — pass through town, hoping to arrive in Maine before severe weather shuts down Mount Katahdin in October.

They eat, rest, resupply, and quickly move on up the trail, leaving plenty of rooms and restaurant tables available for those of us who move at a more leisurely pace. In other words, you can experience Hot Springs like a thru-hiker even if you aren’t one. So that’s what I decided to do.

I could have rented gear from Blue Ridge Hiking Company, founded by Jennifer Pharr Davis — a famous local hiker who completed the AT in 46 days, 11 hours — then taken a shuttle to the spectacular summit of Max Patch and spent two or three days on the Appalachian Trail, hiking the 20 miles back to Hot Springs.

But that seemed too ambitious.

Instead, I parked at the trailhead on the south edge of Hot Springs and stepped onto the AT. After a brisk 250-foot downhill walk through the woods, the trail joins up with NC Route 209, so I followed the sidewalk another tenth of a mile to the Smokey Mountain Diner, owned and operated by Genia Hayes Peterson and Cassie Franklin, a mother-daughter team who laugh and joke with each other like sisters.

On their menu, you’ll find diner staples alongside Appalachian classics like pinto beans with cornbread and pepper relish. It’s the skillet breakfast, though, that has become famous among thru-hikers. “They start talking about it at the North Carolina state line,” says Wayne Crosby, owner of nearby Bluff Mountain Outfitters.

“When they come off the trail, we’re the first restaurant they see,” Cassie says. “They need as many calories as they can get.” Often, that means the skillet breakfast, a heap of home fries topped with cheese, eggs, vegetables, and a choice of meat, delivered sizzling atop hot cast iron. “Just normal people eat it, too,” Cassie adds, though her tone suggests that the skillet is best suited for those hiking 12 hours a day.

I ordered it anyway. It was amazing. I didn’t finish it. 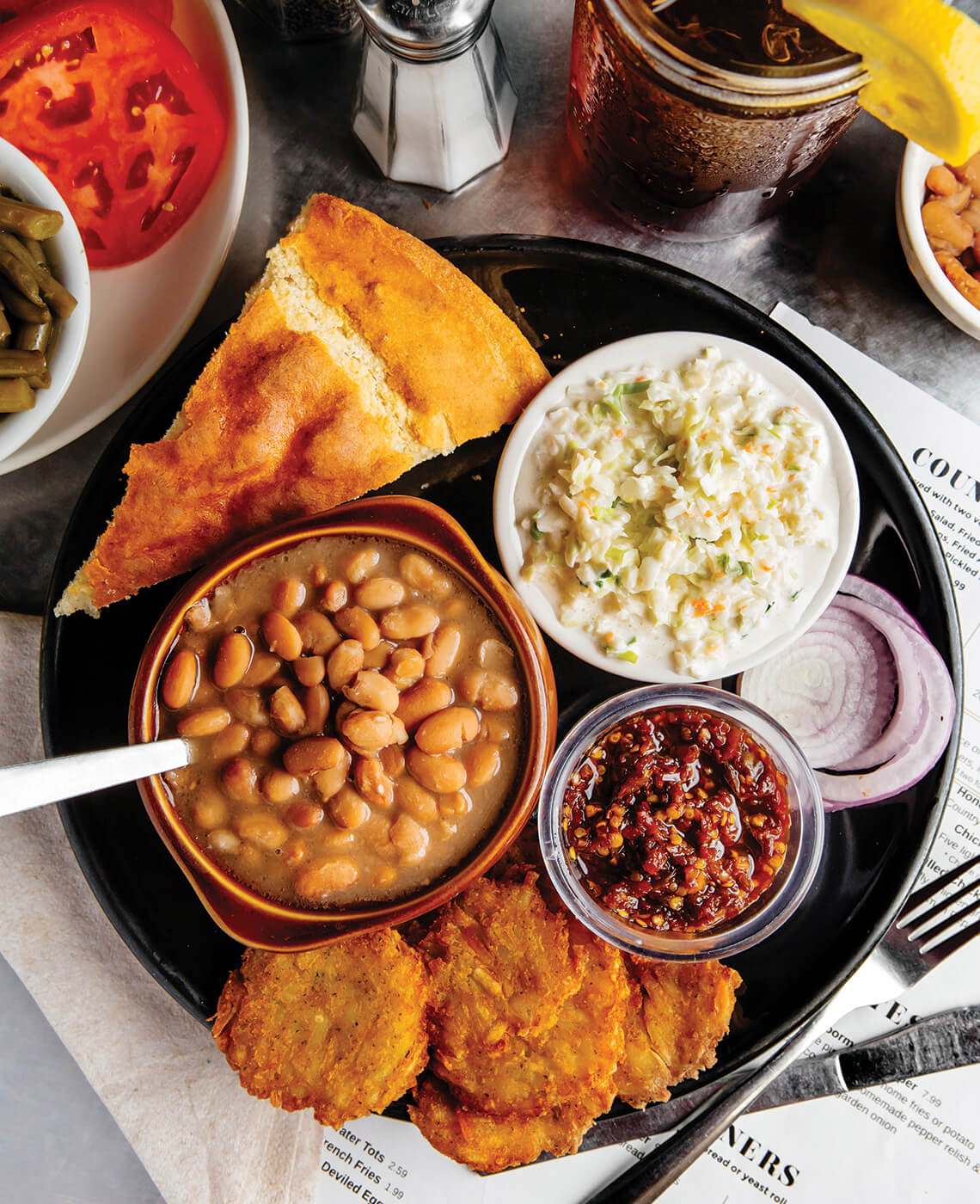 The family’s roots run deep in Madison County. Genia’s great-grandmother created the pepper relish recipe, and her grandmother makes it. Her father was a preacher, and his legacy is honored at the diner with an oil portrait on the wall and a statement of Christian faith on the menu. Genia and Cassie’s version of Christianity is the radically welcoming kind, exemplified in the Gospel of Matthew: “I was a stranger and you welcomed me.” And weary thru-hikers can look pretty strange in Hot Springs.

One local tried to put it kindly: “People think they’re peasants, but they just look like peasants.”

“When they come in, we don’t pay any attention to how they smell,” Cassie says.

Indeed, she does. Genia bought the restaurant from a friend in 1993 and served hikers for four years before hitting the trail herself to see what all the fuss was about. She has hiked 850 miles of the AT, with plans to finish as her work schedule allows. “I love everything about it,” Genia says of hiking, but her favorite part is “all of the people you meet.”

So far as I can tell, only one group can erase the perpetual smile from Genia’s face: the visitors known to some locals as “detourists.” Decades ago, U.S. Highway 25/70 through Hot Springs was known as the Dixie Highway, a busy route between Michigan and Florida. The motorists disappeared when Interstate 40 was built in the 1960s, but they reappear on those frequent occasions when rockslides close the interstate in the Pigeon River Gorge. Then, Hot Springs’ main street grows clogged with impatient travelers, some of whom stop at Smokey Mountain Diner.

“They’re mad when they get here, and they want all their food served before we even give them the menu,” Genia says. “People would say, ‘Is there a quick way to get out of this place?’ Oh, I can’t stand that.”

There is no quick way out of Hot Springs, and that is the beauty of the place.

For the next stop on my Hot Springs thru-hike, I strolled three-tenths of a mile northeast on the Appalachian Trail, aka Bridge Street, passing through downtown to the banks of the French Broad River, where the Hot Springs Resort & Spa is located. That is a fancy name for a low-key establishment, but it hints at a glorious, and curious, history.

For most of the 19th century, the town was called Warm Springs, and its most frequent visitors were hogs and wealthy tourists. The pigs, sometimes as many as 150,000 a year, were fattened in eastern Tennessee and then driven on the hoof down the Buncombe Turnpike to South Carolina and Georgia, where they became food for enslaved workers.

The hogs shared the turnpike with the South’s plantation elite, who arrived by carriage to bathe in the mineral springs and stay at the Warm Springs Hotel, a grand three-story brick structure built around 1840. When it burned in 1884, Northern investors constructed the sprawling Mountain Park Hotel, which advertised “one-fifth of a mile of broad veranda.” By then, the turnpike had been replaced by a railroad, which brought ever larger crowds of travelers. Those same investors decided that “Warm Springs” sounded tepid and, for marketing reasons, made the town “Hot.” Speaking of which: Their hotel burned to the ground, too, in 1920.

The town was called Warm Springs, and its most frequent visitors were hogs and wealthy tourists.

Between fires, the town’s healing waters attracted “fashionable and sickly people from all the Southern States,” one writer reported. The sickly sought relief from rheumatism and palsy, he explained, while the fashionable enjoyed “music, dancing, flirting, riding, bathing, fishing, scenery-hunting, bowling, and reading.” The water was so dense with minerals, he wrote, that “a child may be thrown into it with little danger of being drowned.”

I would have tested this claim, but sadly, my children were back home in Asheville.

The current owners offer half a dozen hotel rooms alongside cabins and campsites, but the springs remain the resort’s calling card. Water from deep underground is pumped to the surface and delivered to hot tubs at about 103 degrees. The tubs, rented by the hour, are located on private decks built along the French Broad and its tributary, Spring Creek, allowing visitors to soak in hot water while gazing at cold, rushing mountain streams. I can report that the experience induces a state of relaxation verging on coma. Had I been suffering from palsy, I surely would have been cured.

If the tub doesn’t do the trick, you can head over to the spa. Massages are popular among thru-hikers, many of whom “come out of the Smokies with sore legs,” says Heather Hicks, the resort’s manager.

After toweling off, I wandered southbound, retracing my steps through town, to Sunnybank Inn, a many-porched Victorian known to locals as “Elmer’s.” The proprietor, Elmer Hall, sat in a rocking chair in the parlor. Jimmy Carter, his 11-year-old English setter–Border collie mix, lay at his feet. A native of Gibsonville, Elmer joined the Peace Corps in the 1960s and served in Singapore, where he taught high school and studied Buddhism. Back home, he helped start Somethyme, a vegetarian restaurant in Durham, before taking a break to hike the AT in 1976. 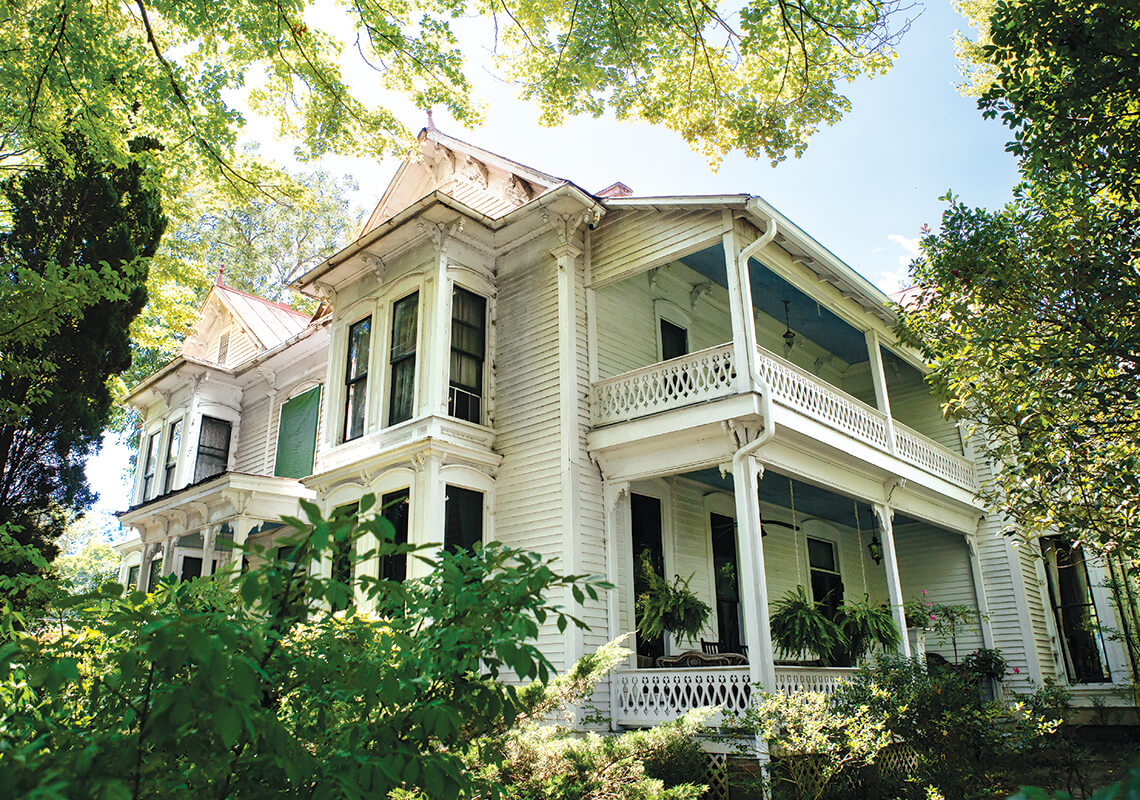 Elmer Hall, proprietor of Sunnybank Inn, hiked the Appalachian Trail in 1976, before taking charge of the Victorian landmark in 1978. photograph by Tim Robison

When he passed through Hot Springs, Elmer stayed for three nights at Sunnybank and fell in love with the mountains and the gentle pace of small-town life. The current inn, which dates to 1875, had been owned since 1919 by the Gentry family, whose matriarch, Jane Gentry, sang ballads for the famed English song collector Cecil Sharp. Elmer took over the property in the late 1970s.

“The house has been hosting hikers since there were hikers,” he says, and there have been hikers at least since the Appalachian Trail was completed in 1937. That means Sunnybank has welcomed hikers for around 80 years, and Elmer has been innkeeper for more than half of that time. He is a living landmark of the AT, and has taken on something of the character of the trail itself: reserved, kind, slightly intimidating but immensely welcoming. 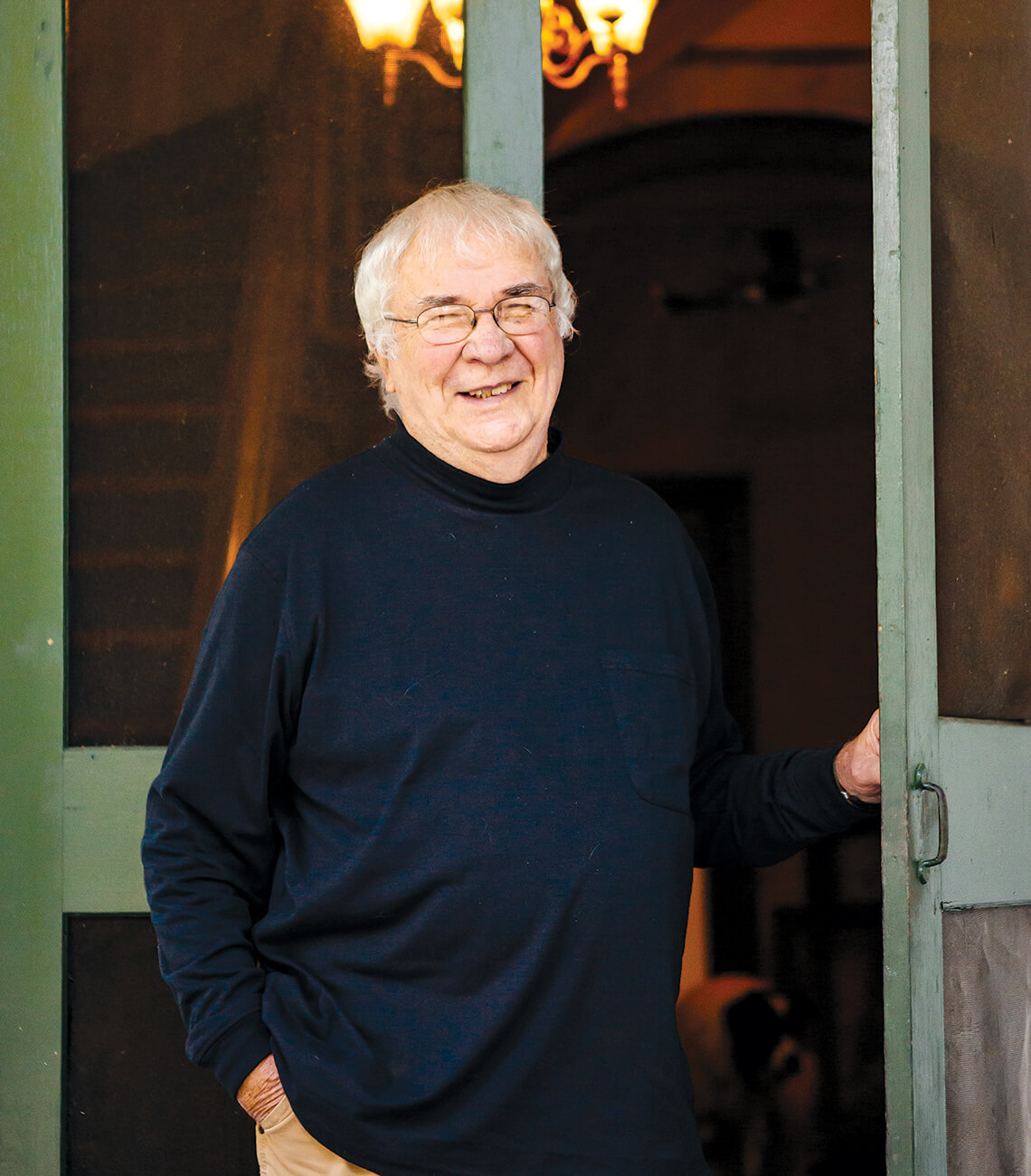 Thru-hikers are “a wonderful, self-selecting group,” Elmer says, the kind of people who travel widely and think deeply. “They’re friendly and open, and they’re not demanding as guests.” When not hosting hikers, Sunnybank functions as a retreat and workshop center. It is gloriously cluttered, with overflowing bookcases, racks of old cassettes and LPs, two guitars, a banjo, and the ancient piano that was too heavy to budge when the Gentrys moved out.

I chatted with Matt Perrenod, a New Orleans resident and former thru-hiker, who studied the lore of the AT. He recommends Sunnybank “because it’s old-school,” he says. “Elmer, you don’t feel like he’s in the hospitality business. He’s just offering hospitality because it’s his way.”

That seems about right. Elmer offers a service for a fee, but his motivation is the people, not the profit. You could say the same thing about the whole town. The fate of Hot Springs has always been shackled to the roads that pass through it: first the Buncombe Turnpike, then the railroad, then the Dixie Highway. All those roads arrived, brought visitors, then departed, taking prosperity with them.

Roads giveth and roads taketh away, but the Appalachian Trail is different. Unused, a footpath returns to nature; maintaining it is a communal act. To join the community, you put one foot in front of the other.

“I walk a block of the AT every time I get the mail,” Elmer says. “Sometimes, I’ll see a hiker or two.”

Make it a Getaway