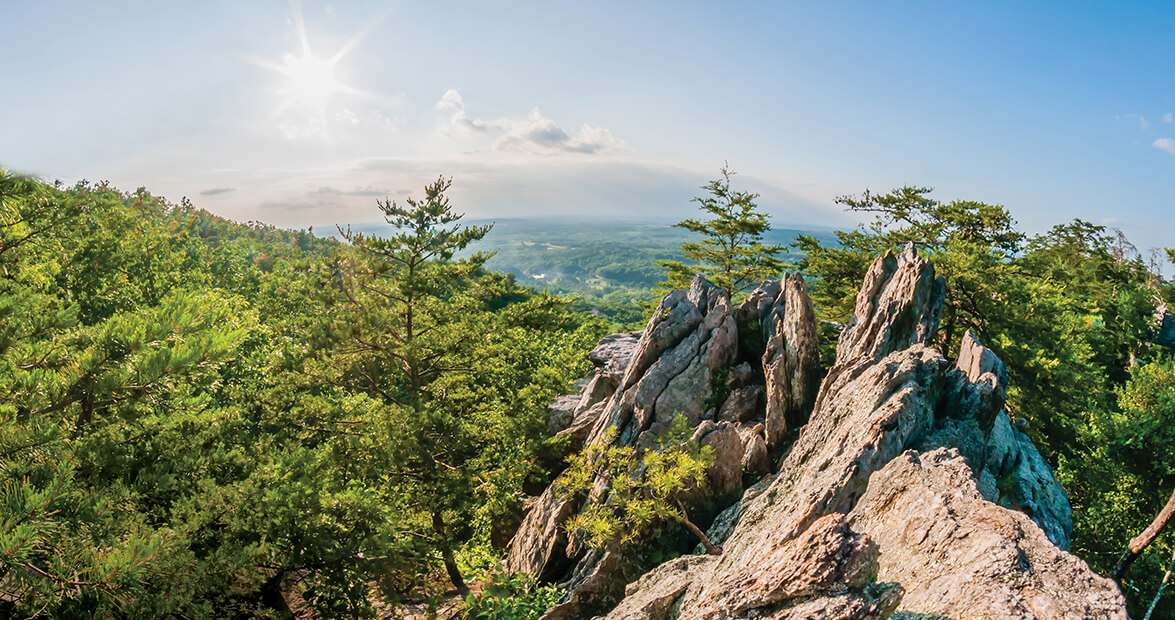 The morning is clear and cool with a hint of cloud cover, perfect for a march or hike. The originals who marched 45 years earlier arrive one by one, assembling on the cracked asphalt parking lot of the Dixie Village Shopping Center in Gastonia. Surrounding them this Sunday are the shopping center’s dormant tenants — a Big Lots, a Chinese joint, a Goodwill — low-rent retail a few miles and a universe away from the mountaintop they can see even from here.

Bob Bigger shows up before anyone else, wearing brown shorts and a forest-green T-shirt that reads “MARCH WITH GREAT VIGAH. 1971 & 2016.” (That “vigah” thing is a John F. Kennedy reference.) He’s ready to march to Crowders Mountain again. But first he wants to show off a photo of the original crew, a sepia reprint from The Gastonia Gazette from ’71. Bigger, then 19, is a slouching hippie decked out in full Creedence gear: flannel shirt, jeans, a shaggy cowl of hair that buries his ears.

“OK. That is me,” he says, pointing. “That is Marlene. That is Judy — Scruggs, now Davis.” A lanky longhair stands to Bigger’s left in the photo, carrying a sign with a hand-scrawled message: “Earth’s Last Stand Begins Here!” “Ralph Brown, our leader,” Bigger says. 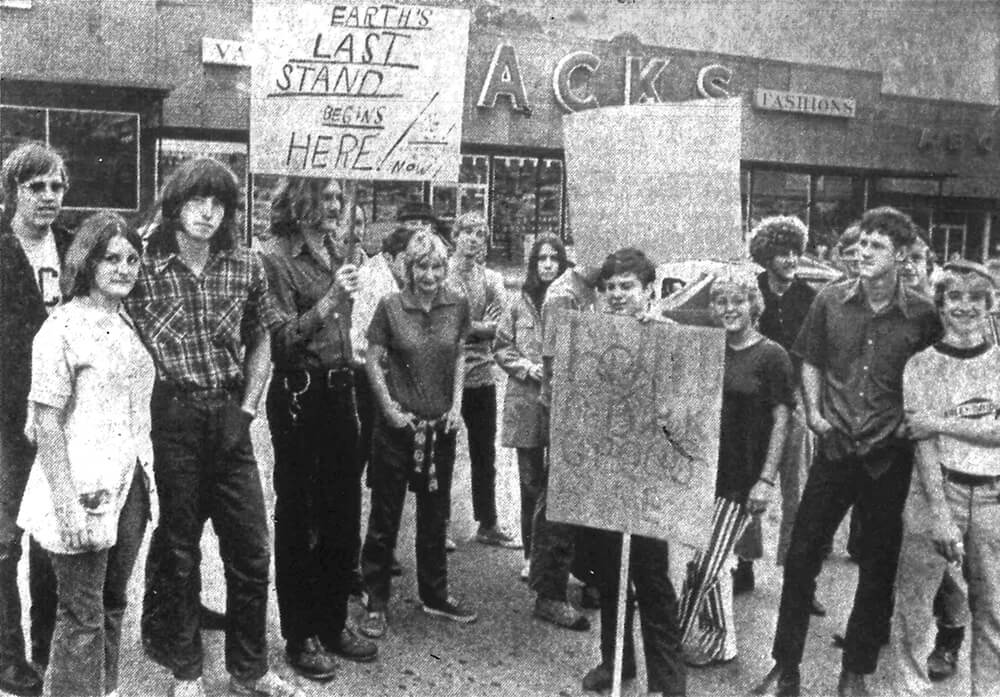 Bigger launches into a story he tells often, about how three years ago, he was on his way up the Backside Trail at Crowders Mountain State Park when he felt shooting pains in his chest that he thought might be heartburn. He’s just getting to the part of the story where he found out it wasn’t heartburn when he’s interrupted by the arrival of a friend from the old photo. “Heeeey, Judy!” As in Scruggs, now Davis. Bigger asks her how she’s doing.

Kyanite is a dark-blue mineral used in products that need to resist intense heat, such as industrial furnaces and porcelain spark plug insulators. In the 1940s, private companies began strip-mining kyanite out of Henry’s Knob, a 1,100-foot mountain in York County, South Carolina, just across the state line from Gaston County. They stopped in 1970, leaving behind a seven-acre pit filled with acidic water. Henry’s Knob remains a federal Superfund site.

The same year, two other things happened: Core samples uncovered kyanite deposits at Crowders Mountain, which rises 1,625 feet above rolling terrain about 10 miles southwest of Gastonia, and Bob Bigger began attending Gaston College, where he joined the Ecology Club. “It was mainly to have a social life,” he says. The club learned that the mountain’s owner, L.P.T. Holding Company of Gastonia, was preparing to offer to sell it to a mining company that presumably would do the same thing to Crowders that was done to Henry’s Knob, just 15 miles south.

“Back then, everybody was protesting something,” Bigger says. “And when we found out they were trying to strip-mine the mountain, we said, ‘We’ve got to put a stop to this.’”

“When you realize it’s 45 years to the day, everything just flows beautifully.”

It wasn’t just them. In November 1970, a citizens’ group wrote to the North Carolina Division of State Parks to ask how to establish a park at Crowders Mountain to protect it. Conservation groups picked up endorsements from not just the Sierra Club and Gaston County Conservation Society, but also the Centralina Council of Governments and Gastonia City Council. The next summer, the state Board of Conservation and Development formally recommended that the state government acquire Crowders and adjoining Kings Pinnacle for inclusion in the state park system.

And with the recommendation pending, on October 30, 1971, Bigger, Brown, and their friends in the Gaston College Ecology Club met at a little shopping center on U.S. Highway 74 outside of town and got ready to march the four miles to the mountain.

The group that sets out from Dixie Village at a little after 9 a.m. numbers about 50, triple the size of the gaggle of college students that had set out from the same spot 45 years earlier, to the day. Unlike last time, they have a police escort. Of the original group, only four could make it: Bigger, Davis, Marlene Smith from the Gazette photo, and John Cashatt, now a Gastonia real-estate agent and appraiser.

The last anyone heard, Ralph Brown was in California and not in great health. He was their lynchpin, everybody agrees. Bigger says Brown told him back then that a man with a gun had threatened him a week before the march. He was, Bigger says, prepared to lie down in front of a bulldozer if that’s what it took to save the mountain.

The police cars’ lights flash, and the big group starts marching west on 74, over gently undulating but mainly flat land. Out come the smartphones, unimaginable doodads back then, now flashing selfies in the immediate present.

Some 45 minutes in comes the hard left onto Archie Whitesides Road and a change in both grade and scenery, a trudge past farmhouses and fields of onion grass and roadside maples turning red-brown. Bigger maintains a steady pace, huffing and canting forward, looking nothing like his younger self except for graying muttonchops he still can’t bring himself to shave. A few folks have to drop out at this point and hitch rides on golf carts. But they still get to see it from midway up the road, coated in green except for a few barren patches of rock, off to their left in the near distance, rising like a Tar Heel answer to Diamond Head: Crowders Mountain.

The North Carolina State Parks system celebrated its centennial in 2016. A few years ago, the nonprofit Friends of State Parks, Inc., held its annual conference, and during a discussion about possible centennial events, someone remembered that group of shaggy-haired kids who’d marched to help save Crowders Mountain. The organization reached out to Bigger, then a clerk at the Gaston County Public Library (he recently retired after 27 years), and he and the others ran with the idea of a commemorative march.

“All parks are obviously citizen-driven,” says Larry Hyde, who, after a decade as the superintendent at Crowders Mountain State Park, retired the day after the 2016 march. “But the big thing with this park is that it took citizen involvement to quickly prevent this resource, which is the mountains, from being strip-mined. That’s why we thought this was a way to put a big picture on this event. And when you realize it’s 45 years to the day, everything just flows beautifully.”

The Ecology Club and their allies won, of course. The State of North Carolina opened Crowders Mountain State Park to the public in 1974. In 2016, 797,553 people visited the park, more than 100,000 over the previous year’s total. Preserving it is no longer an issue. Its main problem now is insufficient parking for all the people who want to visit.

Today, and tomorrow, and for as long as he can get up there, that number includes Bob Bigger. He eventually finishes the story he’d begun telling earlier in the day: His chest pains three years ago turned out not to be heartburn, but a mild heart attack. After surgery to implant two stents, he was back up on the mountain. His cardiologist told him he couldn’t detect any permanent damage because his heart was strong from years of vigorous hiking. Since then, Bigger tells anybody who asks about his own history with the park that, in 1971, he helped save Crowders Mountain — and 40-odd years later, Crowders Mountain returned the favor.