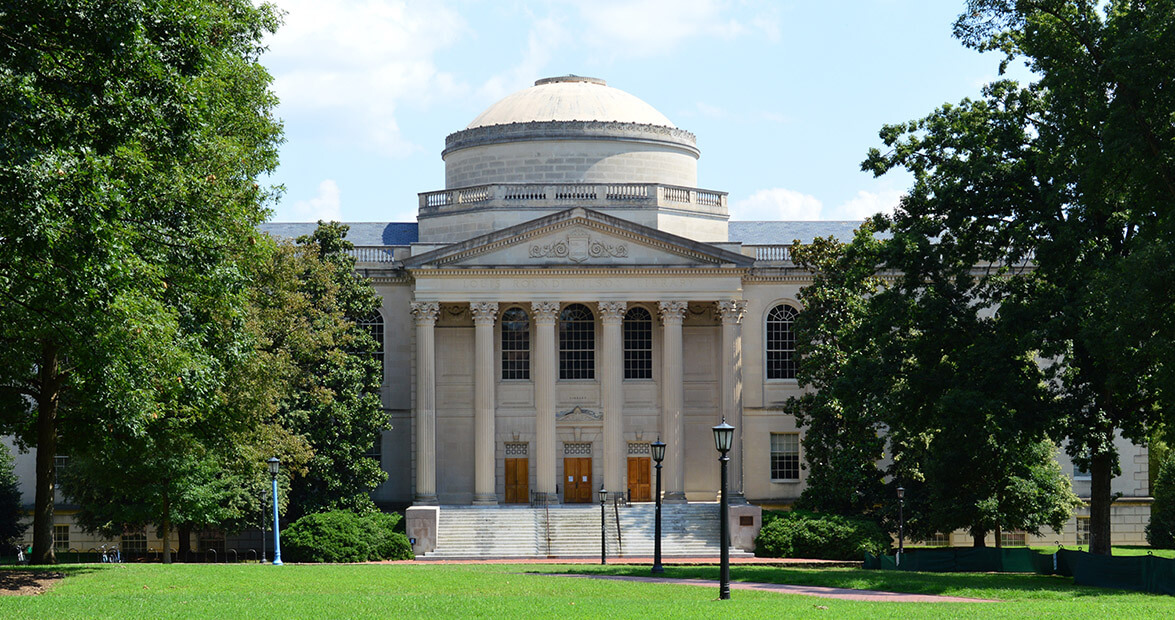 When 18-year-old Hinton James left his home in Wilmington to attend college, he thought his biggest accomplishment would be the 170-mile walk he’d made from his coastal home to get there.

Little did James know that he would actually be the first student at the University of North Carolina at Chapel Hill. After arriving on February 12, 1795, he would remain the only student for the next two weeks, until his other classmates arrived.

James was a pioneer, and the campus celebrates his legacy annually on “Hinton James Day,” which marks the day he stepped foot on campus. UNC-CH is a pioneer in its own right, too. Always has been. It’s the oldest public university in the United States — well, one of three to make that claim, anyway. But we’re going to make a case for our light on the hill.

If you grew up in Georgia, you might’ve heard that the University of Georgia was chartered in 1785 — four years earlier than UNC-CH was. But here’s the rub: UGA wouldn’t actually be established until 1801 when a land site was selected. With all due respect to the Bulldogs, a university without students, classes, or graduates is hardly a university.

And if you ever took a field trip to Williamsburg, Virginia, you might remember that The College of William & Mary opened in 1693 — but it operated as a private university for centuries and only became a state-supported school in 1906.

UNC-CH stood alone as the only public university to graduate students in the 18th century after it opened its doors to students on January 15, 1795.

“Tho’ you will find our institution in an infant state,” professor Charles Wilson Harris wrote in 1796, “such a foundation has been laid, and so great are the exertions on the part of the trustees, that I entertain scarce any doubts, but it will be brought to perfection in due time.”

Even in its earliest years, North Carolina knew it was laying the foundation for a legacy.

Creating a public university in North Carolina had been discussed prior to the drafting of the state constitution in 1776. Once the education mandate for creating the school was incorporated into the constitution, UNC-CH founder William Richardson Davie introduced a bill to officially charter a university in 1789. Though the school had no budget, it was determined to succeed.

In 1792 the university’s trustees voted on the centrally located, accessible, 100-acre swath of land near New Hope Chapel for their campus. The university’s first building, Old East, was constructed for $5,000 in 1793. James would be the first student when the university opened in 1795, but by the end of spring, 40 other students would join him. The number would double by fall. 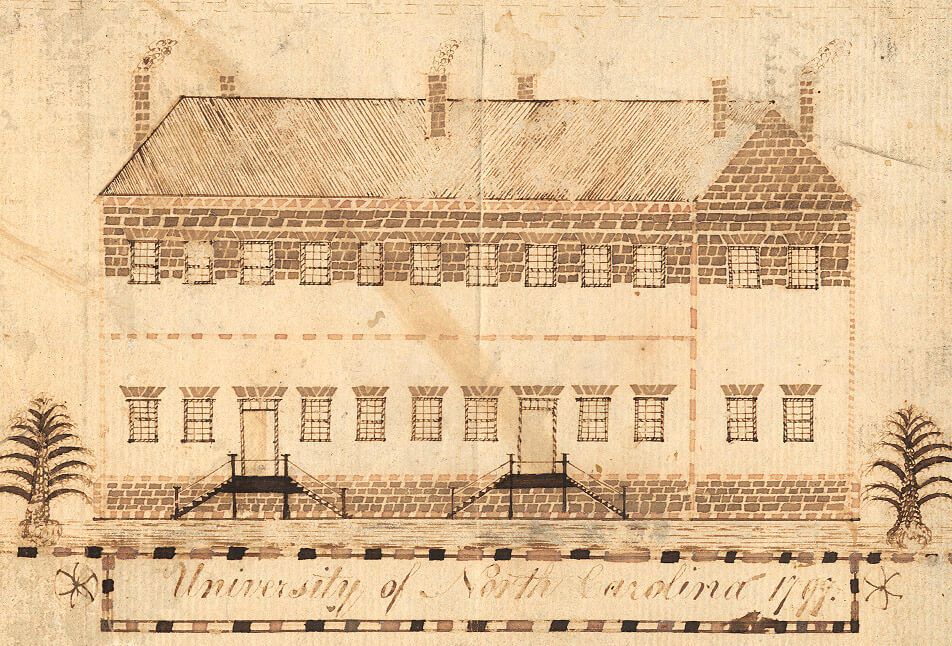 Old East, one of only two buildings on campus in 1797, is captured in an original drawing by student John Pettigrew. The drawing is the earliest known image of the university. Image courtesy of The Wilson Library, University of North Carolina at Chapel Hill.

Students had fewer course selections than those who attend today. They could study philosophy and geography, or a language. But even with the limited class options, UNC-CH established itself as a bastion of liberal arts.

“The constitution of this college is on a more liberal plan than any in America,” Harris wrote in 1795. “The notion that true learning consist rather in exercising the reasoning faculties, and laying up a store of useful knowledge, than in overloading the memory with words of a dead language, is becoming daily more prevalent.”

Though it would take another century before UNC-CH became the modern research university that we recognize now, it was already a different place of learning, and people noticed.

“I feel a secret pride in finding that the prospects of our national institution are so flattering, as to entice to it men of real abilities and merit,” Harris wrote in 1796.

In the 222 years since the university first opened its doors to students, there have been many welcomed changes. The campus expanded from 100 to 729 acres, and the student body population has grown exponentially. Women and people of color have long been able to enroll, furthering UNC-CH’s mission to be what journalist Charles Kuralt famously called “the university of the people.” Not to mention, students are now allowed leave their dorm rooms after 8 p.m. and visit “taverns” after class. Perhaps the most welcomed change, much to the relief of current students, is that today’s dining hall food has undergone a major makeover from the stale bread, bad tea, and meat that “generally stinks & has maggots in it,” according to letter written by students John and Ebenezer Pettigrew in 1795.

Yet the most important parts of the university have stood the tests of time. The grounds are still beautiful and lush, the students still inquisitive, and the collective love and passion for UNC-CH still strong.

“I think that [the founders] envisioned a university that would help to educate and nurture future leaders for North Carolina,” says university archivist Nicholas Graham. “I think that’s been an unquestionable success. First UNC Chapel Hill, then the rest of the UNC system. They’ve done tremendous work.”

Whether or not you’re a true-blue Tar Heel, North Carolina natives all have a reason to be proud of our state for forging the path for education and opportunity centuries ago and for making North Carolina home to the oldest public university in the nation. We’re not the only state to claim we have the nation’s first public university, but you know what they say: “To be, rather than to seem.”