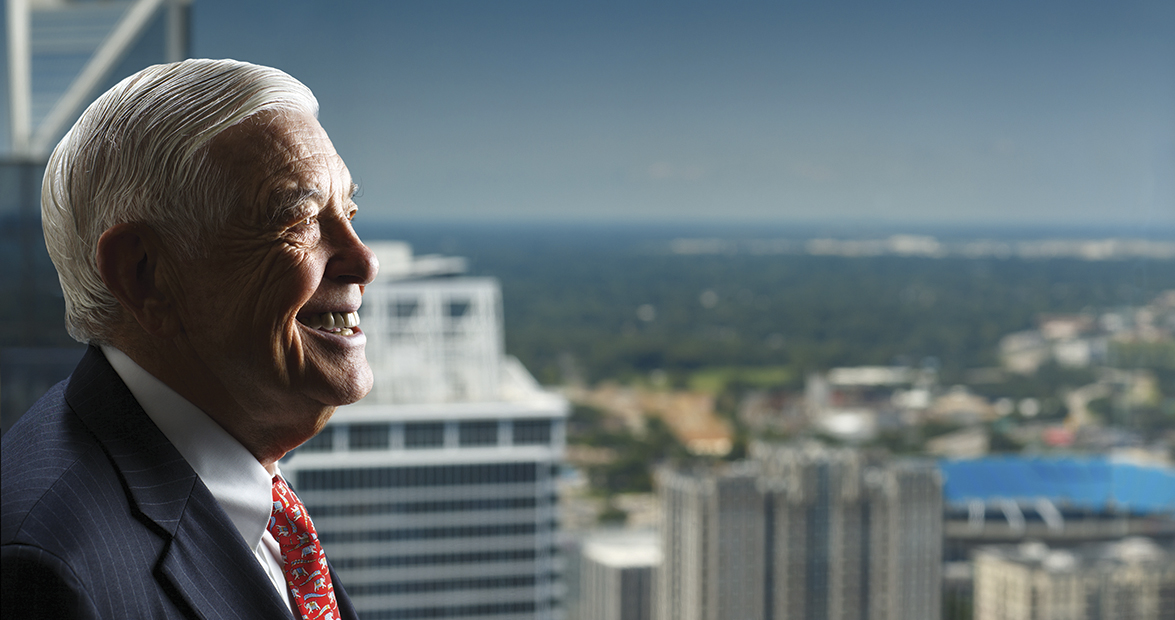 1981: Charlotte’s banking boom begins. This historic date is included in our 50 Moments that Made NC.

Hugh McColl retired as a banker 16 years ago, but he still has a corner office about two-thirds of the way up the Bank of America Corporate Center, on the 41st floor. McColl built this building when he was CEO, and he will tell you so. He’ll tell you that he was born without fear, and that the Marines cemented that fearlessness. When a visitor to his office saw a hand grenade (not live) on his desk, McColl became aware of its value as a metaphor, and now has grenades scattered around his office. One is large and crystal. Others are small, golden, and arranged in a six-pack.

“I like to influence the decision about what we are going to do,” he says with a childlike chuckle and a big smile. Statements like that — and there are many — manage to be both cocky and charming, in a Dizzy Dean “It ain’t braggin’ if you can back it up” sort of way. Sometimes McColl says, “Well, I’ll have to admit,” before disclosing something that he did not foresee, and that transgression is always minor. He doodles. While he talks about being boxed in by banking laws, he draws a rectangle. When he explains the loopholes he exploited in those laws, he draws two concentric circles: a literal loophole. On the wall near the door are two framed quotes. One reads: “Be patient and the funeral procession of your enemy will pass in front of your tent.” The other includes a drawing of two vultures sitting on a branch. “Patience, my ass …” it reads. “I’m gonna kill something.”

McColl stands 5 feet 7 inches, but he’s had, and still has, an outsize influence on the city below his office, a city that was built, in many ways, in his image. “I do have the feeling, when I stand at the window and look out, that this is mine,” he says. When he talks about specific buildings, he will rise up in mid-conversation, walk to the window, and point. A few years ago, as he stood in this spot, with cranes rotating and bulldozers turning parking lots into stadiums, parks, condos, and office towers, he said three words: “We’re not finished.” Today, it’s clear that even as Charlotte has grown, even as younger leaders have taken hold, even as the city’s skyline continues to rise, that even at age 82, the we in that statement still includes Hugh McColl.

The privacy fences around the Carolina Panthers practice field are no match for McColl and his binoculars, which he calls his field glasses. After he watches a few plays, McColl shifts his gaze to the place where the Panthers play their home games: Bank of America Stadium. “I put that there,” he says. “There’s no question who put that there. I decided our bank was going to finance that stadium, we were going to do 100 percent of it. I was going to put it where I wanted it. OK?” And then, there’s a small but critical question: Would a Northern bank have financed that stadium? In the mid-1990s? In Uptown Charlotte? “No,” McColl says. “We were factually competing with two groups of people that I did not like. The first were the Northerners.”

“I’m Southern. This is where we decided to stand and fight. And I was winning.”

For most of North Carolina’s history, the South’s banks were small. No banks could legally open branches beyond their home states, but Northern banks, in places like New York and Chicago, were much closer to a larger manufacturing base. That gave them more deposits, which gave them more money to lend. Before the Civil War, the South’s capital was tied up mostly in slaves and agriculture, and when the war ended, the economy took a hit and never fully recovered. As such, big North Carolina businesses like Duke Power and Burlington Industries had to look to Northern banks when they needed money because no North Carolina bank could meet their needs. California banks were also on a different level. Not long after he started working at a bank in Charlotte in 1959, McColl looked at the annual report from Bank of America, then based in San Francisco. The amount that the bank had grown, in just one year, was larger than the value of McColl’s entire company. “I realized that this is not going to work. We’re too little,” McColl says. “That drove me. That realization set me off on the path to build the largest bank in the world.”

It took a while. In 1981, McColl’s bank, then called North Carolina National Bank, NCNB for short, bought a bank in Florida. State leaders there quickly moved to block other out-of-state banks from doing the same. Those other banks got jealous, and asked states to allow them to expand. Quickly, Southeastern states passed laws allowing other Southeastern banks to cross state lines. “That law was written by my lawyers,” McColl says. And thus, regional banking was born.

In Washington, though, there was no support for banks to go national. “I visited more damn congressmen and senators than you can shake a stick at,” McColl says. It wasn’t until President Bill Clinton took office that things changed, thanks to a meeting after a campaign stop in Albany, Georgia, one that lasted until 3 a.m. “I got him on my side,” McColl says.

In 1994, Congress finally allowed banks to buy and own other banks across state lines, allowing McColl to pull off his most ambitious move. NationsBank, as NCNB was by then known, completed its $66.6 billion merger with BankAmerica in September 1998, creating what is now Bank of America, headquartered in Charlotte. (McColl says that if he had to do it again, he would have kept the NationsBank name.) Three years later, McColl retired. Afterward, the downside of rampant growth and consolidation became apparent, put on display in 2008 when Bank of America and others were deemed too big to fail in a Great Recession they had helped create. “Nevertheless, the company survived,” McColl says, before turning back to his earlier days. “We changed the entire banking industry in the United States. That’s as modestly as I know how to put it.”

All of that national expansion glosses over a very local problem for Hugh McColl, one that he first realized in the 1970s, after he became NCNB’s president at age 38. Charlotte was known as a family town then, and once you were here and had put down roots, it became hard to leave. Attracting people to Charlotte was another story. “It used to be that you could fire a shotgun down the street at 5 in the afternoon and not hit anybody; that’s how boring this town was,” McColl says. “You need the arts, you need pro sports, you need the whole nine yards. So, I spent the next 40 years building a city,” he says with a pause, “as well as a bank.”

It helped that McColl had a competitor, First Union, headquartered a few blocks away. The bank, which merged with Wachovia in 2001 and then was swallowed by Wells Fargo in 2008, had long been the second group of people that McColl did not like. Savvy fund-raisers and charities in Charlotte knew that they could play the two banks off each other because each one wanted to be seen as the more generous benefactor. McColl’s bank propped up downtown restaurants and built a hotel. Bank of America also constructed a $13 million bus terminal ($13 million is “really nothing,” McColl says) and just gave it to the city, because the city was, in McColl’s view, dragging its feet. “We were impatient,” he says, “but we had money, and we had power, and we made things happen.”

At some point, McColl says, “greed finally overcame fear” in Uptown Charlotte, and after that, outside investors and developers started building towers of their own. And, thanks to both banks, the city became the second-largest banking center in the country, partly because McColl always resisted calls to move his people and his bank to the Northeast. “What would be the damn point?” he says. Charlotte’s a great place to live, work, and raise a family, plus, “We could work longer hours here than you can in New York, to be very candid about it. So why would I move? And also, it’s because I’m Southern. This is where we decided to stand and fight. And I was winning.” Then he chuckles. Everything in this city, McColl says, has gone according to plan. “Charlotte is not an accident,” he says. “Charlotte is a purposeful happening.”

That makes the city different from others in the states that surround it; McColl calls it the “Luxembourg of the Carolinas.” Uptown Charlotte is bustling, a far cry from the more pastoral and traditional parts of the state. And, yes, McColl has heard people complain about uptown’s traffic and parking. “Build more railroads,” is his response. “That’s what we’re gonna do.”

There’s no use speaking about McColl in the past tense. He and his wife, Jane, still fund the arts, such as Charlotte Ballet. He’s still the chairman of and a partner in a private investment firm. And the mayor has just wrapped up a visit to his office. The two have been collaborating on a plan to tackle the problems that have come with rapid growth, namely a lack of affordable housing and opportunity for the community’s poorest.

While the mayor was there, she looked down and complained that there were too many surface parking lots uptown. “And I said, ‘Mayor, that’s what has driven me for 40 years, those parking lots,’” McColl says. “If it’s a choice between having parking lots and towers, I’d rather have towers. New York doesn’t have any damn parking, either.”

From the 41st floor, everything is moving. Construction cranes swivel at eye level. The streets below are alive with people and cars. Jets lift off from the airport nearly twice a minute. “I admit that I don’t know what I would do if I ever had to be on the ground floor,” he says. “I’d be miserable.” Makes sense. From up here, Hugh McColl has always been able to see the big picture.